Countdown to Halloween Day 7: Anthologies - Tales From the Darkside the Movie!

Welcome! Today we're back into horror anthologies! And I want to focus on one of my very favorite portmanteau films of all time: Tales From the Darkside the Movie! This came out in 1990 and features a bevy of talent both behind and in front of the camera. 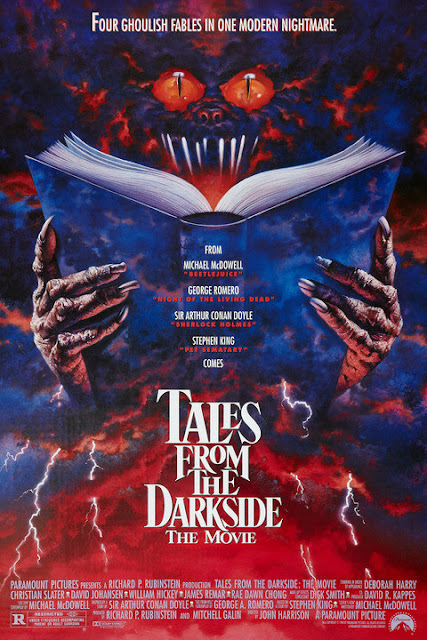 This one has it all folks, it is just a CLASSIC in every meaning of the word. From the three stories themselves to the wrap-around story that holds it all together, there aren't many ways I can think of to improve upon this one. From this point on it should be noted that SPOILERS are in full effect. If you've never seen this one and want to be surprised by the stories (and that just might happen!) then stop reading now, go watch the movie, and come back! 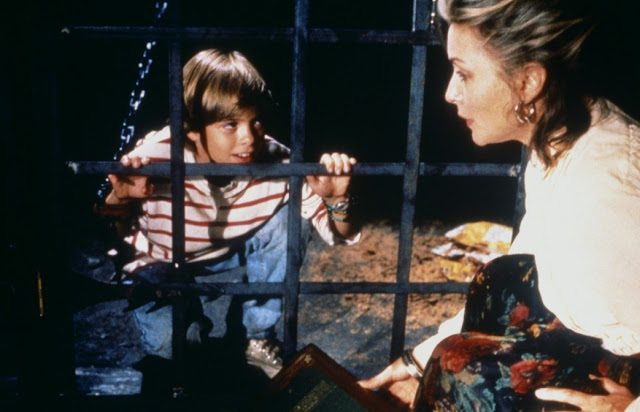 The casting on this film was just AMAZING, let me just start off by saying. In the wrap-around story we have none other than Deborah Harry as a suburban witch who cooks little boys up for dinner parties! She's extremely blasè about the whole affair, which is a bit distressing for Timmy, the paperboy she has locked in a cage in her pantry. Timmy decides to try and Sheherazade his way out of being cooked by distracting the witch with stories. Thus, we get the three tales contained in the movie.

The first tale is "Lot 248" which is based on an Arthur Conan Doyle story (yes, the Sherlock Holmes guy!) and stars Christian Slater and Steve Buscemi in a tale of supernatural revenge. You see Buscemi's character has been framed for a theft he did not commit so that he would lose out on a scholarship. He wants revenge on the ones who framed him (who happen to be the sister and friend of our main protagonist, Mr. Slater) so he does what anyone might do, and gets himself a mail-order mummy which he animates and uses as his murderous slave. 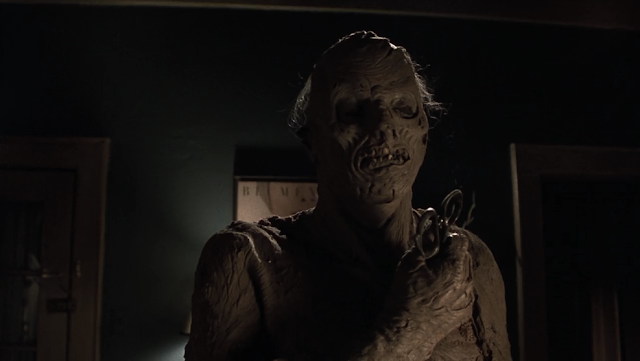 The mummy succeeds in killing the twerps who framed Buscemi, but fails to kill Christian Slater, who in turn discovers the mummy's weakness: 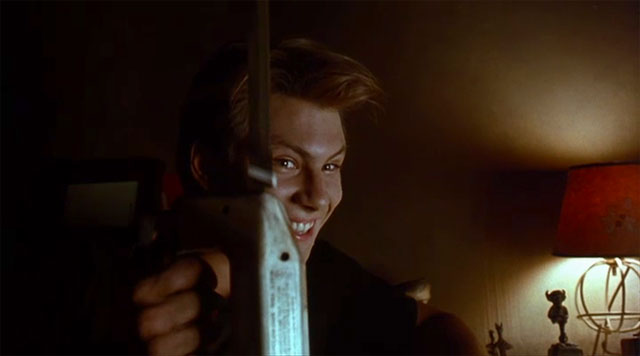 Modern appliances! Slater takes down the mummy, and ALMOST takes out Buscemi... but has a change of heart at the last minute. Which is too bad because... 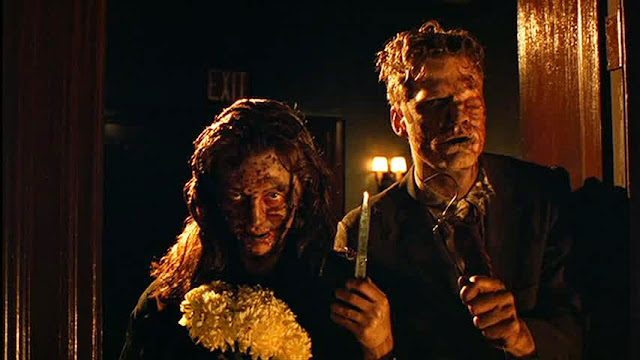 Buscemi reanimates Slater's sister and friend and sends them after Slater. We are to assume this does not end well for our hero. What I LOVE about this movie is that it is unapologetically a creature feature from one end to the other. They don't go too left field with ghosts or demons or any kind of nonsense that feels really out of place. They manage plenty of smart twists and turns and some great moments of pure genius that make these classic-feeling monster stories really shine. 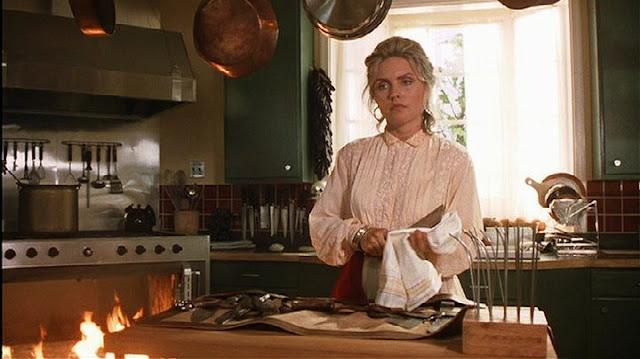 Debby Harry is rather impressed with the stories as well. She does indeed let herself get distracted with each tale, and she gets annoyed with Timmy, and with herself for doing so. But it doesn't stop her from listening again and again... 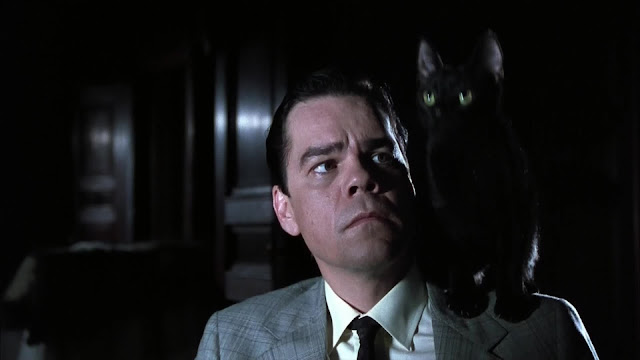 The next tale is a Stephen King story adapted by George Romero. There was a lot of buzz that this film was originally intended to be another Creepshow follow-up but they went a different direction. I don't know anything about that honestly. I do know that "The Cat From Hell" is my least favorite of the three main stories featured in the film... but man if THIS is the weakest tale, then we're in good shape. Basically Buster Poindexter is hired by Dr. Finklestein to kill a cat that is picking off people that have profited from using cats as test subjects for a pharmaceutical company. Pondexter is a hit man who agrees to the odd job, and goes after the cat with gusto and panache. BUT... 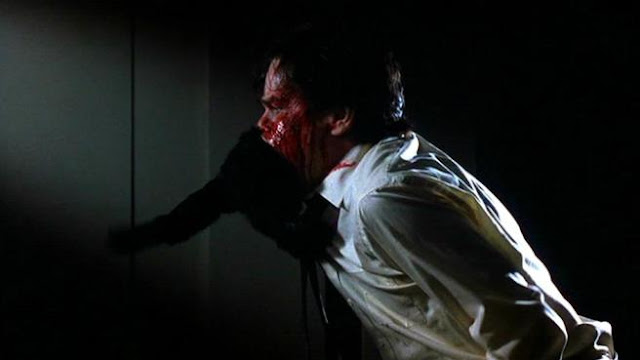 This happens. The cat climbs down Buster Poindexter's throat, waits for Dr. Finklestein to come back to the house... 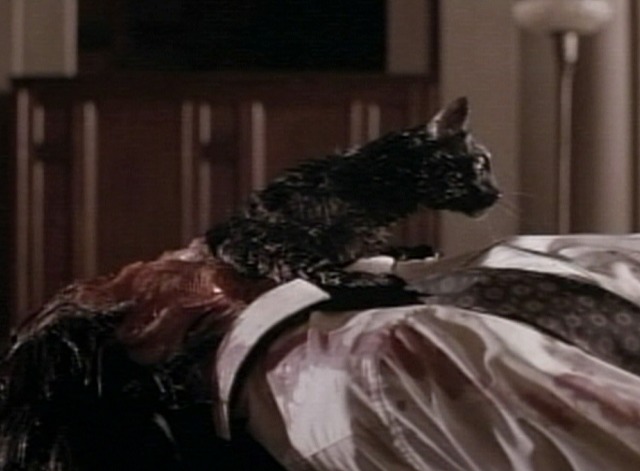 ... and then coughs himself up like a murderous furball. 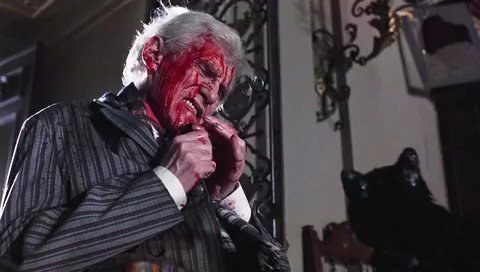 He jumps up in Dr. Finklestein's lap (this is actually famous character actor William Hickey, who did indeed voice Dr. Finklestein in The Nightmare Before Christmas) causing him to have a fatal heart attack. It's a pretty cut and dry tale of an evil old man who is besieged by a murderous, vengeful cat and hires a hitman to take care of the problem, only to have said hitman... invaded(?) by said cat as a sort of "surprise I was hiding in the cake!" kind of moment that kills the old man. You know like you hear about on the news from time to time.

I can only assume that at this point the cat went off to kill an evil gnome living in Drew Barrymore's baseboard. 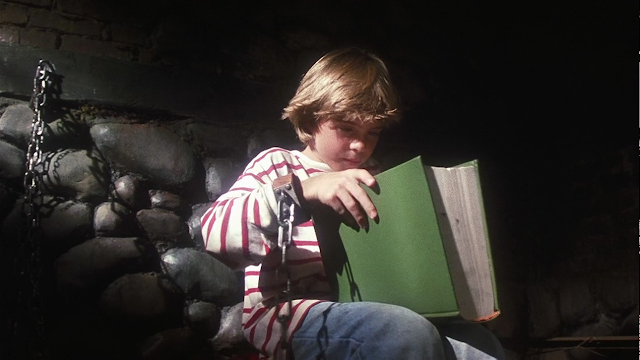 The stove isn't quite ready yet, so Timmy takes a stab at another story. I'm not really sure what his end game is here though (I mean, there's the way things play out at the end of the movie, obviously, but I don't assume that was his plan all along) because it doesn't really matter how long you keep a hungry witch distracted with bedtime stories... she's still got you in a cage in her pantry. It's not even like he's running out a particular clock to save his life... he's trapped. But anyway... 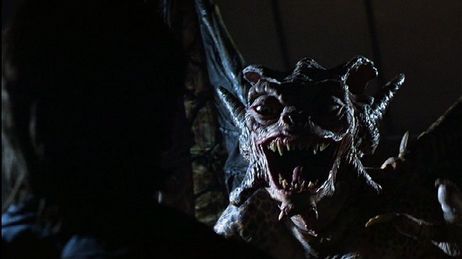 The last story in the trio is my absolute favorite. I think Lot 248 comes in second place, and The Cat From Hell comes in third (unless you count the wraparound, in which case, The Cat comes in last) but this final story, "Lover's Vow" is just so poetic and artful and twisted and gorgeous to look at and tragic to think about... it has it all. This one's a gargoyle story. James Remar is a struggling artist who witnesses a demonic gargoyle kill someone in an alley near his apartment building. The gargoyle spares his life on the condition that he never tells anyone about the gargoyle. Remar promises to keep the secret and the gargoyle lets him go. 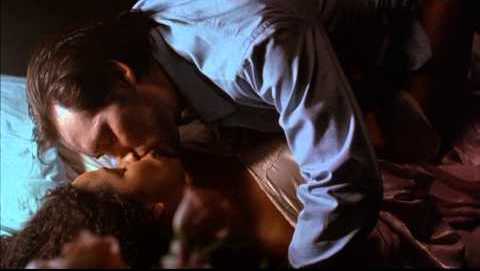 Remar meets the beautiful Ray Dawn Chong and they become a couple very shortly after his encounter with the gargoyle. His life takes a turn for the better. They marry, have some kids, and he becomes a mush-less-struggling-much-more-successful artist. They live it up real good. 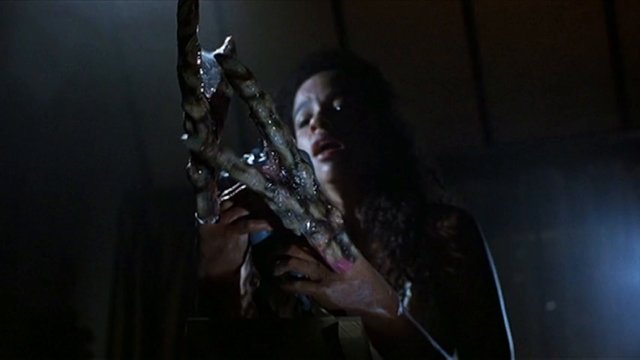 Then Remar does something incredibly stupid, but necessary for the story to work. HE TELLS HIS WIFE ABOUT THE GARGOYLE. He shows her drawings of what it looked like, and even a FREAKING BUST HE SCULPTED OF IT. And surprise surprise, his wife turns out to BE the gargoyle. She reverts back to her gargoyle form and so do their precious little darling children:


The gargoyle kills the guy even while professing her love for him. But a pact is a pact no matter how tragic the consequences of breaking it. Them's the breaks. Honestly though, I have always LOVED this story. It is so deliciously tragic and the perfect kind of story for Tales from the Darkside. What makes it even worse is that the guy breaks his promise out of love! Love for the very creature he made the promise to! When faced with the mummies and gargoyles of this movie, can you blame me for being a little less impressed by the killer cat? 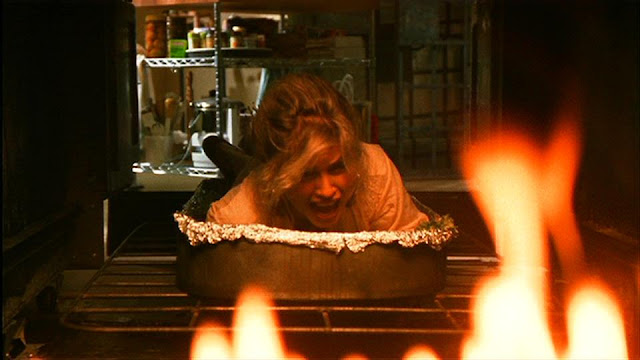 Debby Harry realizes that Timmy, the little jerk, has distracted her almost to the point where she won't be ready for her dinner party! She makes a few fatal mistakes that would have Julia Child spinning in her grave, and the tables get turned, Debby takes a rack of HUGE needles to her back, and she ends up getting Hansel-and-Gretel-ed into the oven by Timmy. That smug little jerk then eats a cookie as he smiles at the camera and walks out.

This is one of my all-time favorite anthology horror films. It just has it all! It has a perverse sense of humor, it has art, and it feels like real effort was put into making it a good movie. If you've never seen it before, check it out! If you haven't seen it in a long time, check it out! If you love this movie and watch it every other month or so, check it out! You'll be glad you did!

I'll be back soon with more Grotesque Goodwill Goodies! So until then, Happy Haunting!

I'm doing this countdown as a part of the official Countdown to Halloween, so be sure to pop over there and look and see who else is participating this year.
Posted by Derek Ash at 11:26 AM