Welcome back everyone! Today I'm back on the anthology theme, and this time I'm talking about horror classic: 1982's "Creepshow," written by Stephen King and directed by George A. Romero! 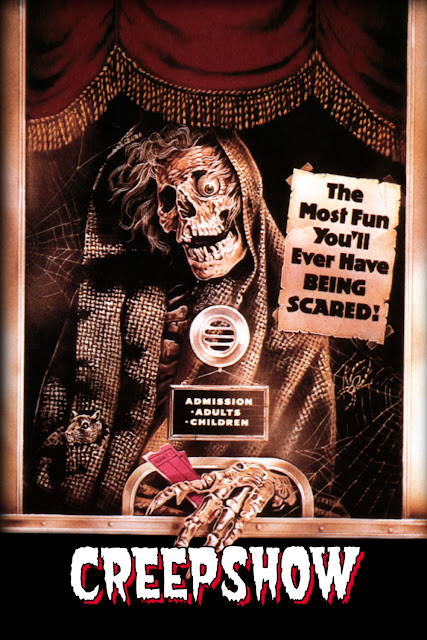 I want to preface everything I say in this article by giving you some personal background: I saw Creepshow for the first time as a pretty young kid. I remember my mother and my aunt always watching a lot of horror movies around me, without much regard to what I was taking in. Ultimately, as an adult I am thankful for this now... but back in the day I just remember the dread this movie put into me. I was sent outside to play by myself after having a complete meltdown during "The Crate" but came back inside very quickly after realizing how terrified I was to be alone outside after having seen the lion's share of the movie. With all that being said, I do have a certain level of nostalgia for this film. I know I was subjected to it more than once growing up, though nothing rings clearer in my head than that first viewing. I've watched it a couple of times as an adult, but it has probably been over a decade since my last viewing, so this time, with my 15 year old daughter it was nice getting caught up with the stories again. 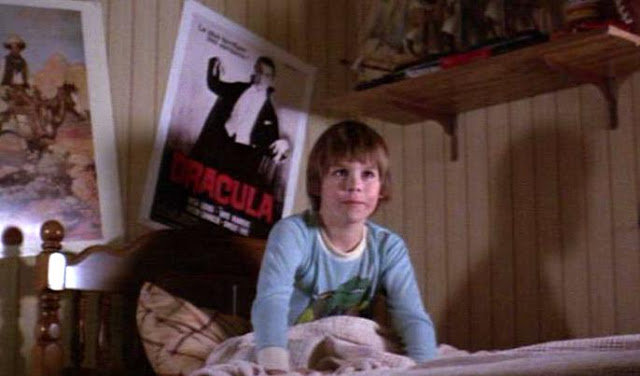 Something that I always forget about this movie is that the framing story is supposed to be sometime in October. Probably not Halloween night itself, but there's a Jack O' Lantern in the front window of the Northrup family's home. This little detail made me smile and love this movie all the more. I never knew that the kid in the framing sequence was actually Stephen King's son, Joe "Hill" King! Billy is a kid you just know is going to be trouble... but MAN he has an awesome room! After Billy's dad lectures him, slaps him, and tosses his Creepshow comic book in the trash, Billy starts colluding with this guy: 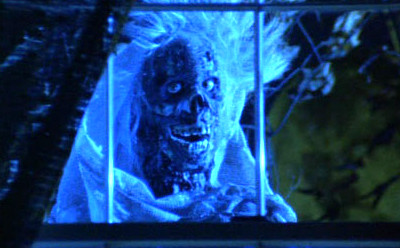 The Creep! The creep is really well done here, and the transition from live action to animation is not a bad one at all, considering the comic-booky feel of the entire movie. Having seen Creepshow 2, I definitely feel like they fail to do the transitions half as well there as they did in this first one. 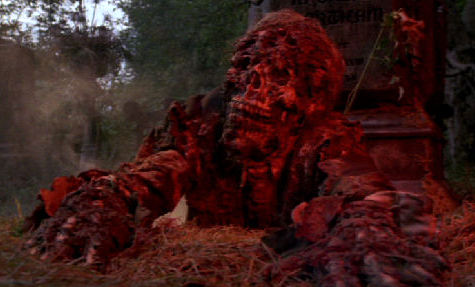 Of course the first story in the bunch is "Father's Day" where we get the famous line "I WANT MY CAKE!!!" But I forgot how fun this one actually was! I honestly expected to be a little bored during this viewing, but with only maybe one exception I'll mention later, I found the whole movie to move along at a nice, brisk pace, to do a great job building suspense, and to instill a great sense of ghoulish fun into all the stories. I was thinking I was going to have to "tolerate" this movie but then ended up having is cemented in as one of my all-time favorite anthology horror films. 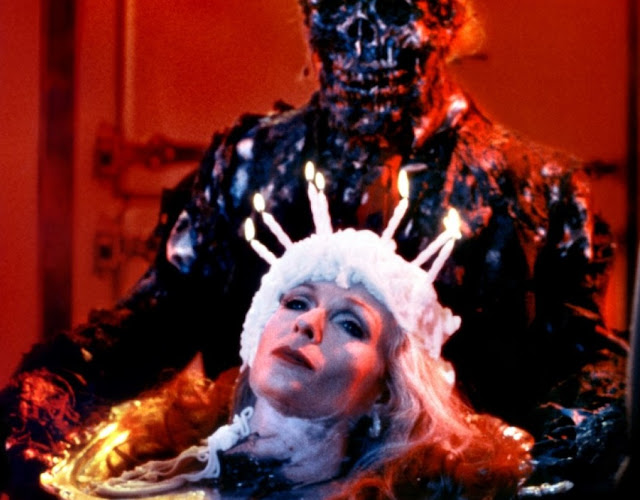 Of course everyone remembers the big finale of this one, with the frosted head on a platter, but there are so many great flourishes, so many nasty, biting insults and one-liners being tossed from one snobby, self-absorbed family member to another, and so many creepy little moments leading up to the end that I think this one gets remembered for the wrong things sometimes. 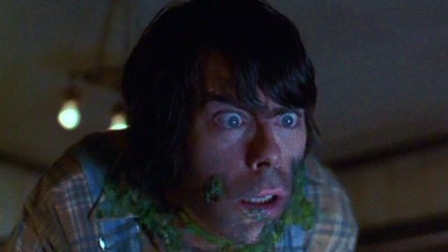 "The Lonesome Death of Jody Verrill," injects a lot of goofy humor into a story that is equally horrifying and just plain sad. We laugh at how much of a dufus Jody is throughout, but the feeling of loneliness and defeatism throughout just makes us sympathize with the sad sack as we watch him being swallowed up by extraterrestrial weed-growth. 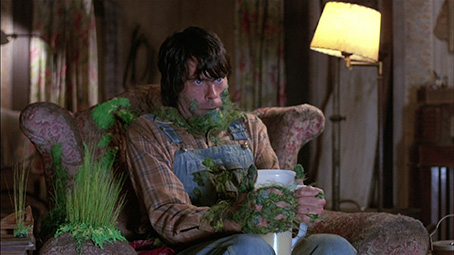 King's performance here is certainly not oscar-worthy or anything, but he does exactly what the character needs to do, and that is humanize him. We get the feeling that Jody's a bit of a man-child, and when we see him at the end, getting ready to take his own life, it feels like the first mature decision he makes through the whole short. I'm probably giving this WAAAY more thought and analysis than I should be, but this viewing really, REALLY made me appreciate this movie more than I ever have! 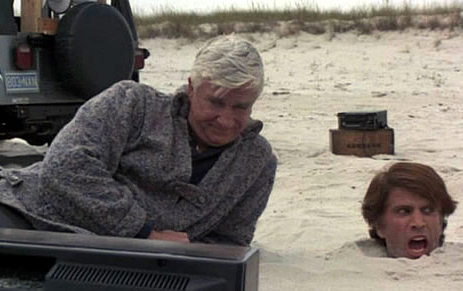 "Something To Tide You Over," feels like one of the weaker entries in the lot, though not by a whole lot... I think the only reason it really feels that way is that it goes on for a bit longer than it should. They could have sped up the story and ratcheted up the tension a bit more by getting to the beach a bit faster in the first place. Once Leslie Nielsen plants Ted Danson in the beach and leaves him there, I would like to say things speed up a bit, but we just get waaay too may shots of both Becky and Harry getting splashed in the face with sea water before we finally get to the pay-off. And then watching Richard wander around his house for a while and talk to himself seems to drag a bit before we finally reach the conclusion. 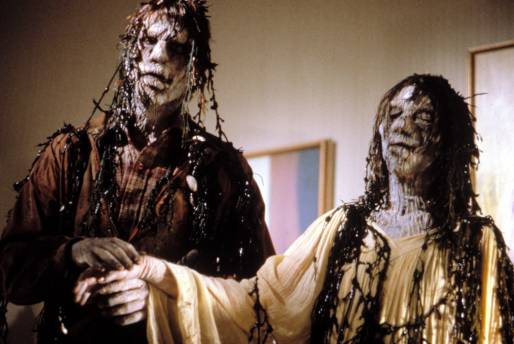 This is probably the only story that could have done with a good trimming. I would have liked to have seen some sort of return to the framing device in the middle of the film, kind of checking in on Billy somehow at this point in the film. That would have made the time to do so. This is also the story I had the most problems with because I don't genuinely believe there was anyway Ted Danson couldn't have broken free from that sand. Sand isn't cement. Even if "You can't get leverage!" as Richard tells Harry at one point, you can certainly wiggle around, and use your chin to clear room, and I just don't believe you could trap someone so permanently that way. If he was in that tight he would have suffocated long before he drowned. I... don't hate this story, there were just reasons it felt a little less awesome than the others I guess. 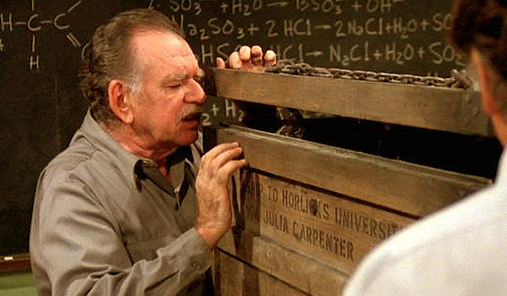 My absolute favorite story in the bunch has to be the 4th story, "The Crate" which terrified me the most as a kid. I think that in and of itself has a lot to do with why I like it so much. As a kid monsters under the bed or in the closet, or under the stairs are very powerful ideas. And the creature from The Crate (referred to as "Fluffy") is such a clear, visceral embodiment of all those fears that it just resonates.

I also love the characters in this story. Everyone from Dexter, the stuffy professor who very nearly loses his mind as he watches two people get chowed-down on, to Henry, the suffering husband who keeps fantasizing murderous endings to his relationship with his boorish wife Billy. The characters are pretty fun and you end up liking to two professors more than you probably ought to, all their vices considered. 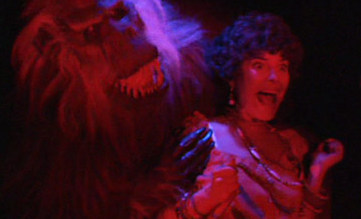 There's just nothing I don't love about this one, folks. From the effects to the story to the acting, it all just gels. It doesn't bother me nearly as much as it used to as a kid, but there was something about watching the janitor getting dragged slowly up into the overturned crate to be devoured that still gave me a nasty case of gooseflesh. Ugh. 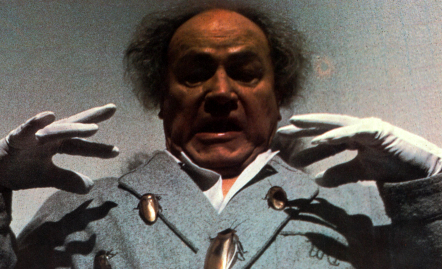 The final tale, "They're Creeping Up On You," was never one I was all that nostalgic for, but boy do I appreciate it more now! This claustrophobic, germophobic, katsaridaphobic little story, about a corrupt businessman who has tried to hermetically seal himself off from the outside world, actually has a lot more going for it that I remembered. Mr. Pratt is an old bastard who uses his money to hurt others, while tucking himself away safely in his supposedly germ-proof apartment. Until the roaches show up to take a sort of karmic revenge on him. It clips along at a pretty brisk pace, and the tension builds nicely, using something as simple as the appearance of scurrying cockroaches in a sterile, white environment to kind of help us visually gauge how intense things are getting. As the roaches begin to reach critical mass and we know Pratt's time is short, it gets a little panicky for the viewer as well. 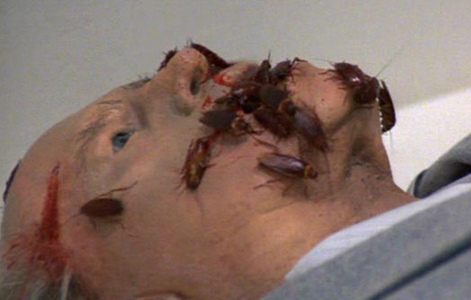 The ending sequence, as you watch Pratt's body erupt with cockroaches is hard to look at, even knowing that it's a practical effects dummy and not a real body. 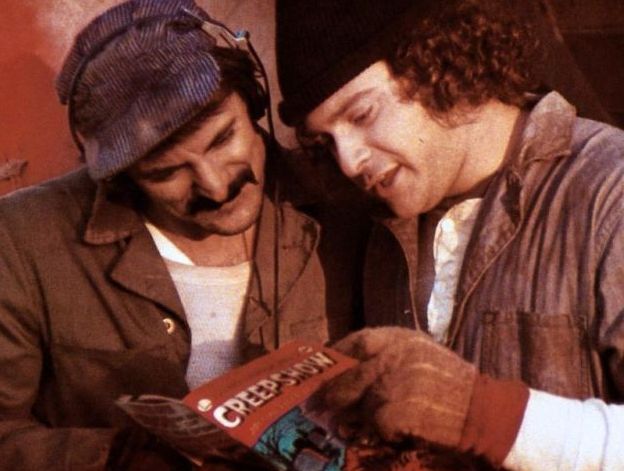 Finally we fly back to the framing story where we find that the garbage men cometh and the Godfather of Gore himself, Tom Savini, and his cohort Marty Schiff have snagged Billy's comic book and are poring over it. Interestingly enough, they notice that you can no longer send for the mail-away voodoo doll, because someone has already clipped the order form. I wonder who could've... 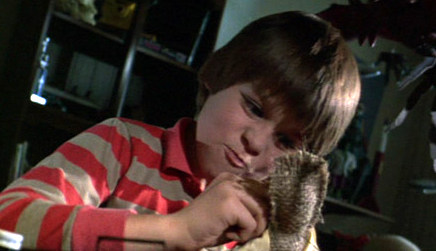 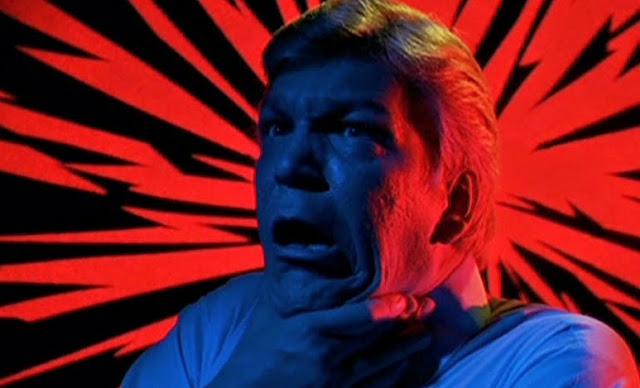 And of course, who is the intended victim but good ol' Dad (played by horror alum Tom Atkins)? The film ends on a happy note, and we all walk away a little wiser for it.

As I said before, I was very impressed with how much I got out of this viewing! It holds up very well for what it is, a schlocky, campy, comic-book influenced horror anthology. There are a few late-70's early-80's moments here or there that date the film for sure, but overall, those are nothing distracting whatsoever. I can safely state my love for this film and yell it from the rooftops because this little baby really does a great job.

Well that's it for tonight kids! I'll be back soon with some Gristly Goodwill Goodies! So until then, Happy Haunting!

Remember, I'm doing this countdown as a part of the official Countdown to Halloween, so be sure to pop over there and look and see who else is participating this year.
Posted by Derek Ash at 2:46 PM