Welcome back! Today I'm going to focus on just a couple of Goodwill finds, but very special ones in the Goodwill Geek's household! 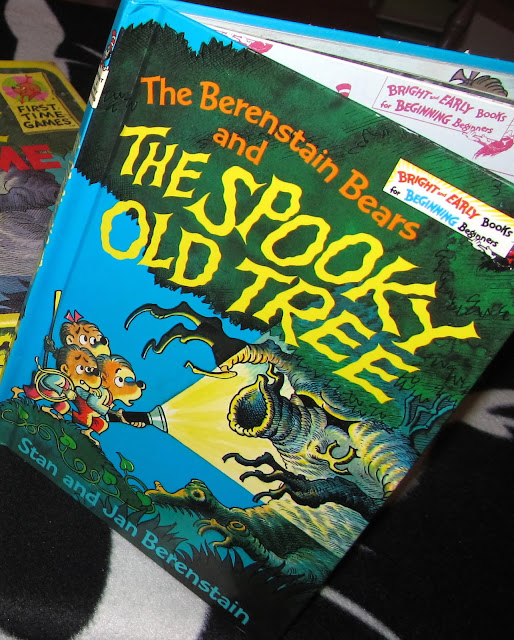 I don't remember exactly WHEN I found Stan and Jan Berenstain's "The Spooky Old Tree" book at Goodwill, but I realized it was one I remembered fondly from when I was a kid myself. This book came out in 1978, which was the same year I was born! I was born on October 4th but I have no idea what day this book was released on. But we're around the same age anyway. 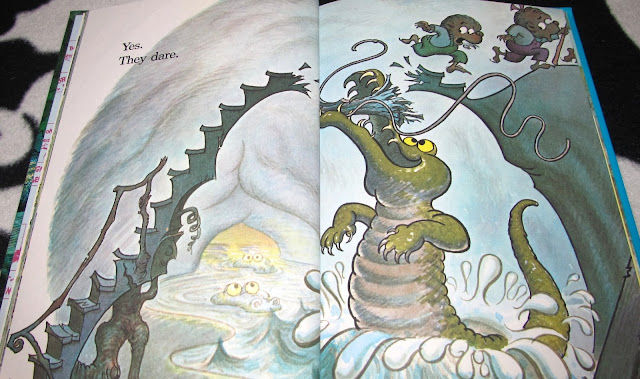 This book is fantastic! It's a kid's book version of the Goonies going on an adventure in the Addams Family house.  The book manages to build suspense with very little wording and very little in the way of plot besides: Do they dare keep going? Yep! There are crocodiles... 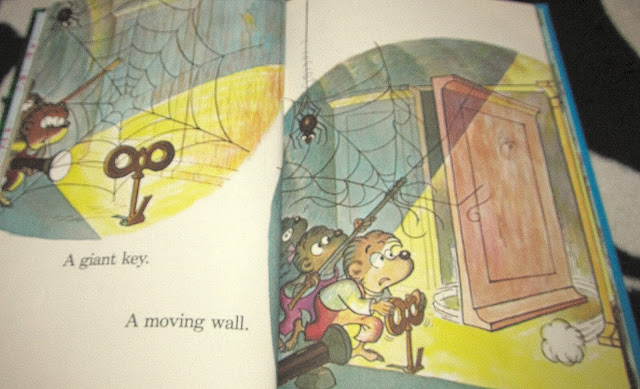 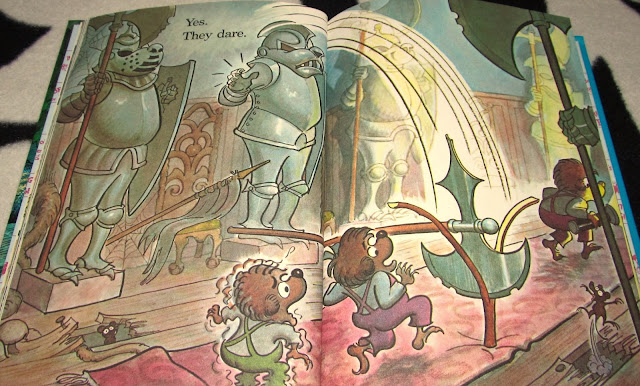 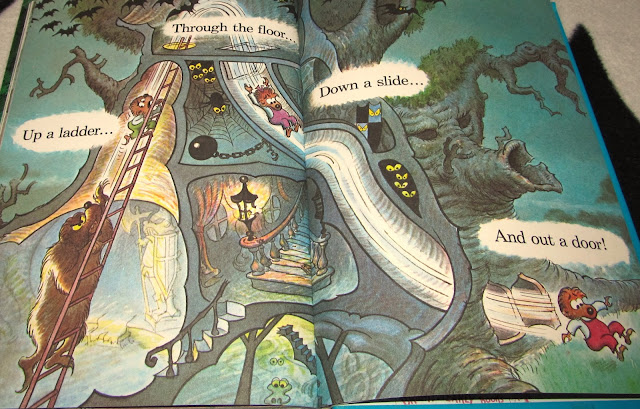 And a ferocious grizzly bear that chases them hungrily out of the Spooky Old Tree. My boys THRILL over the adventures these bears have in this tree. It's ridiculous. And if you think the Berenstain Bears are just not your thing, think again. This is not one of the wordy, moral touting books with a lesson about strangers or enjoying your birthday too much. This is a nice, succinct adventure story in a creepy wonderland for kids. It has a firmly established and well-deserved permanent position on our Halloween books shelf, and it gets read at LEAST once every Halloween season.

What's even better? They made a board game in 1989! I paid a little more for this one than I would most board games... but it's complete, and it's a special case so I relented. 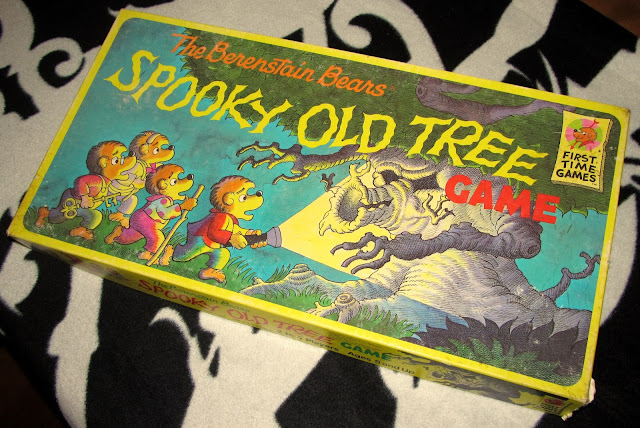 The cover of the box reveals that they've added a fourth, key-toting bear to the posse, whereas the book only has three kids, equipped with rope, a flashlight and... a stick. 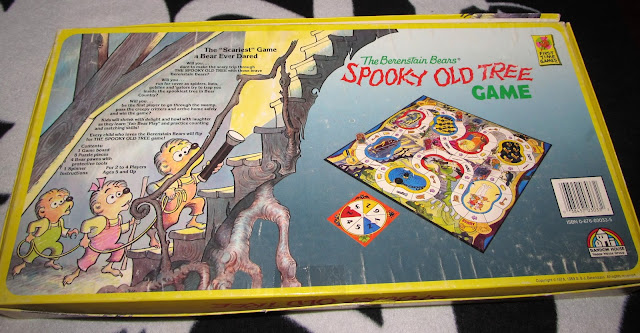 The "Scariest" Game a Bear Ever Dared! We haven't tried this thing out yet, but we're GONNA. I showed this thing to my boys and they FLIPPED OUT. So we'll see if this thing can be as hair-raising a they seem to think the book is.

I love everything about this box. The instructions sheet is even awesome to behold. Check out these silhouettes! 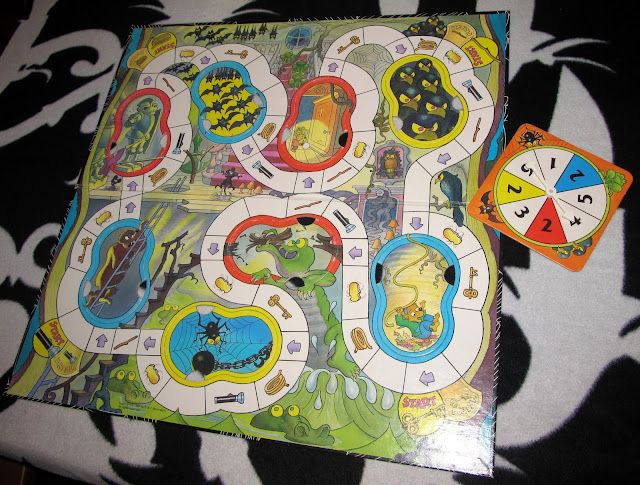 Here's a look at the whole game board, and the spinner. All of the weird pear-shaped portions of the board with color boarders are designed to flip over. I'm not sure why. I believe they all represent hazards of some kind... but as we have yet to play the game... I have yet to find out. But this gae board looks like so much fun! It's frame-able in my opinion. They put a lot of attention to detail into this thing and they threw in some fun little points of interest: 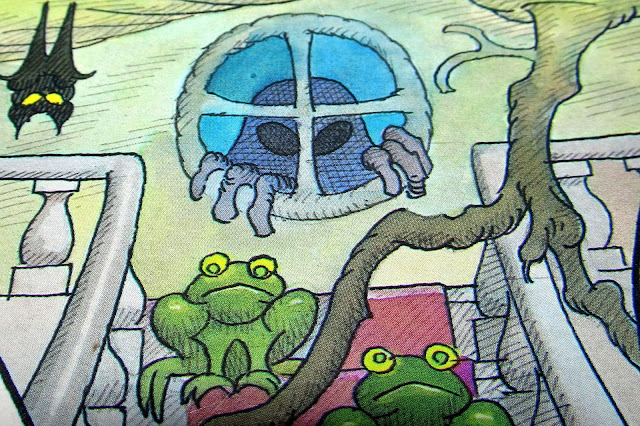 Like this guy here! Creeping in the window with his creepy crawly fingers... what the heck even is that!? Nothing like this nightmare fuel shows up in the book. He lives in this board game only. 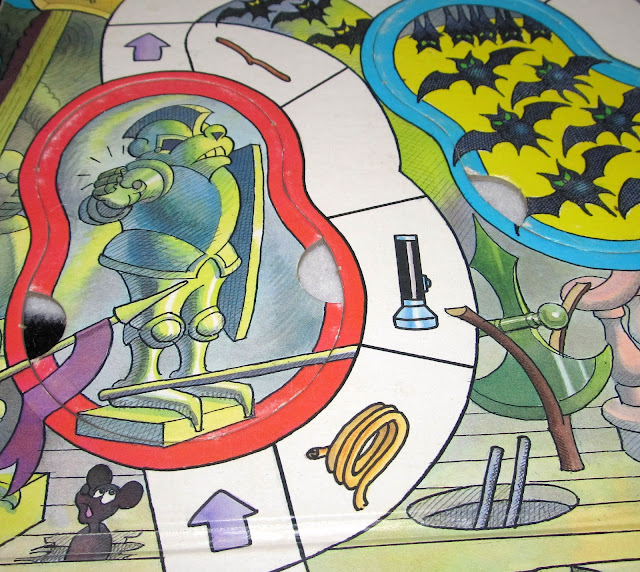 A lot of the threats from the book are represented, like the killer suits of armor, 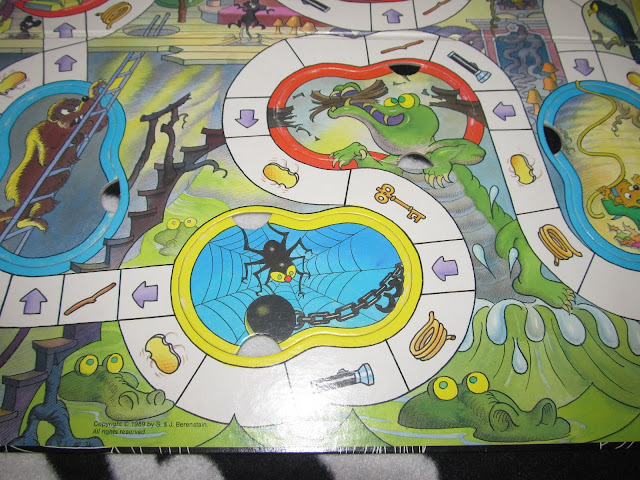 And the snapping crunching alligators under the stairs. So cool. I know you probably think it's lame that I'm getting this hyed up over a board game based on the Berenstain Bears... But dudes. This is basically what my life is all about these days. LET ME HAVE THIS. 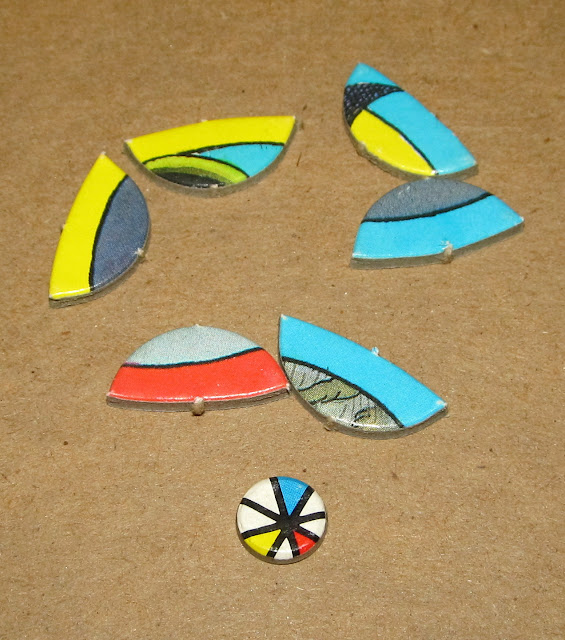 I don't know why exactly, but I was also tickled to see that the cardboard pop-outs to a lot of the game pieces still live in the box. Like the center of the spinner, and the tabs on some of those pear-shaped pieces that flip. These could have-- SHOULD have been thrown away... but here they still are. A testament to hoarding in a way.

Well that's it for tonight kiddos! I'll be back soon with more Gross Goodwill Goodies! Until then, Happy Haunting!
Posted by Derek Ash at 7:36 PM