Welcome back kids! I'm talking about anthologies again today, and I thought I'd check in on the 2012 film, V/H/S! 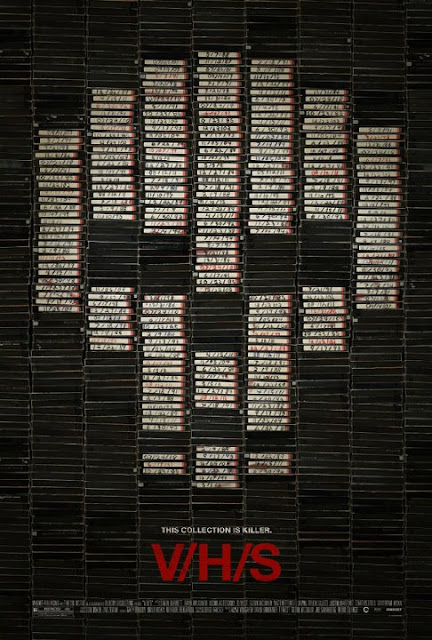 Now, I'm going to level with you on this one. I kind of like this movie, but I also kind of don't like this movie. I have a very distinct love/hate relationship with this film for SURE. I've mentioned loving this movie right here on this very blog before, but my passion has decidedly cooled over time and I see it with a more critical eye these days. 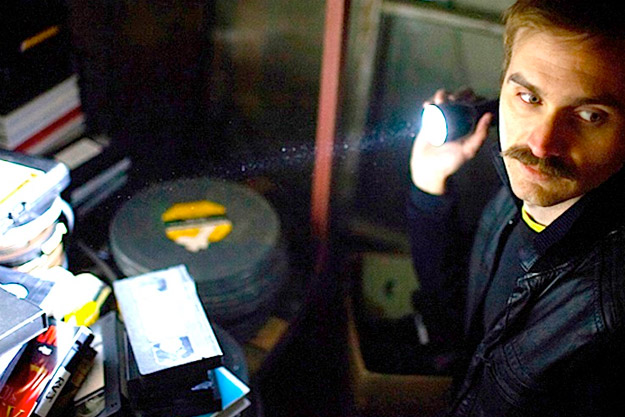 The framing story "Tape 56" isn't anything special. It sets up an interesting idea, and it has some very cool moments in the telling, but ultimately it fumbles the execution. It's too weird, too mean, too lacking in any genuine fun to do anything for me. Basically, a group of guys who do cruddy stuff on a regular basis are hired by someone to steal a VHS tape from a house. They break in and find a strangely empty house, with one room containing a seemingly dead old man sitting in a room full of tapes and televisions. As you do when burglarizing... the guys pop in a few tape to watch what's on them, and our anthology is up and running! 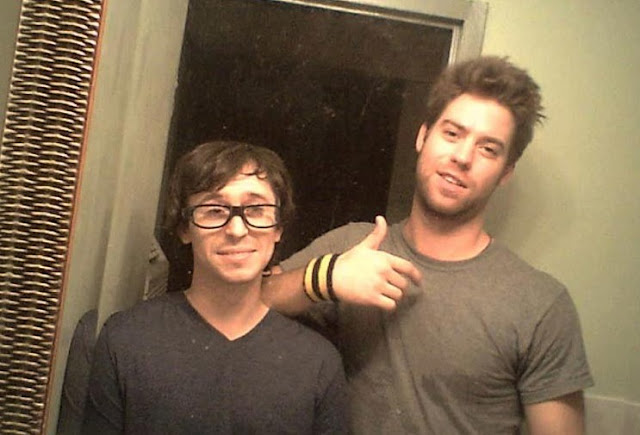 One of my biggest gripes about this film is that we have a lot of found footage stories in media that has no business being on VHS tapes. For instance, the first story "Amateur Night," is filmed on a pair of spy-camera glasses that would obviously be some sort of digital recording. I mean, yes, you could record this media onto a VHS tape after the fact, I get it. But still. Anyway... these guys are two of a trio of guys out to seduce some ladies and then covertly film them while having sex. 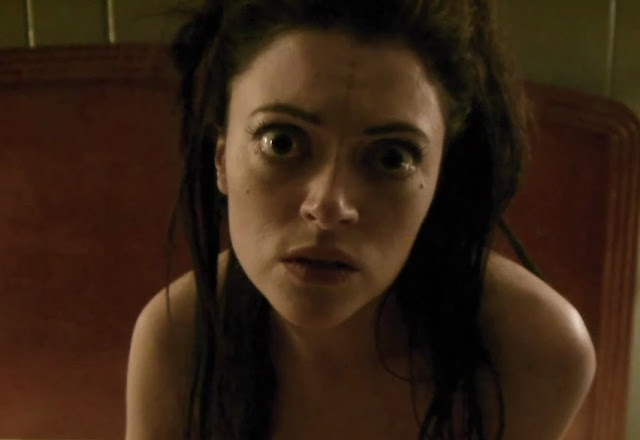 They bring a couple of girls back to their hotel room. One of them passes out drunk, and to their credit, the guys leave them alone. I mean, these guys are still creeps but they aren't taking advantage of a passed out girl, which says they draw the line somewhere I guess. The other girl they bring back with them is the one above. She keeps telling the guy wearing the camera glasses, "I like you," and it is obviou she has some sort of interest in him specifically. 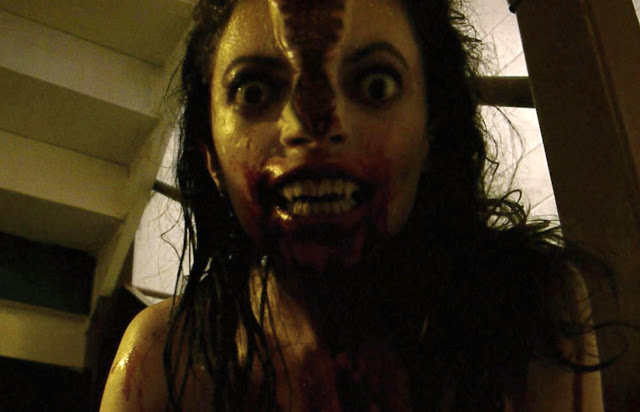 This interest becomes even more apparent when she kills and drinks the blood of camera-guy's friends (NOT the passed out girl though, I don't THINK) and even though she has transformed into the split-faced horror pictured above, she seems to be expressing some sort of friendly feelings towards him. Oddly, the blood of the other two guys seems to make our vamp-lady sick, so maybe she's just trying to express that camera guy is her "type". Oh-ho! Blood type joke!

Overall this is one of the better stories in the movie, and a good way to kick off the stories. It is very bloody, and very nudity-filled, and someone gets their junk ripped right off and tossed on the floor... so not for the light hearted by any means. 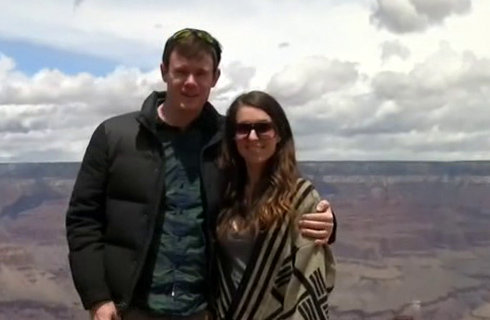 We kick back to the framing story for a bit, then another tape is popped in, and we start the story "Second Honeymoon," which is an odd duck. It's probably the slowest of all the shorts in this movie, and for all the build up there's really not a ton of pay-off. With all that being said, I have a soft spot for this one nonetheless. 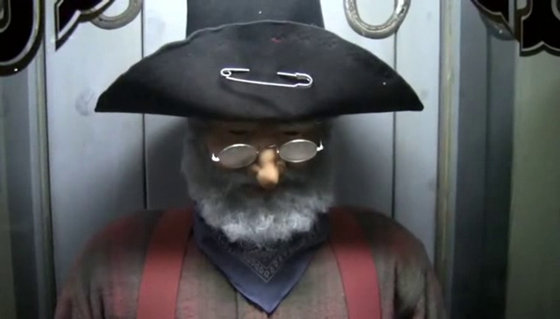 A couple is celebrating their second honeymoon, and much of the short is just scene after scene of the couple mundanely exploring roadside attractions and the like. The horror kicks in when the couple go to sleep in their hotel but the camera continues to roll footage, showing a stalking stranger menacing them in their sleep at night. 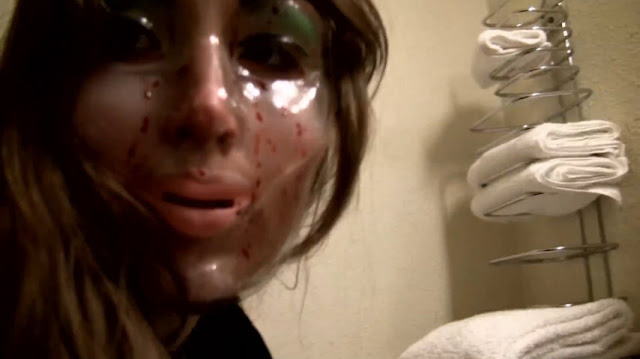 Long story short, the stalker turns out to be the female lover of the woman in the honeymoon couple, and it seems they've been colluding to kill the husband, which they do. We never see the killer's actual face, only the translucent mask pictured above. In the end, this short just feels out of place in this movie. It doesn't feel right with the rest. I get that there's an attempt to tell a variety of different style stories here, but this one doesn't keep up with the pack. 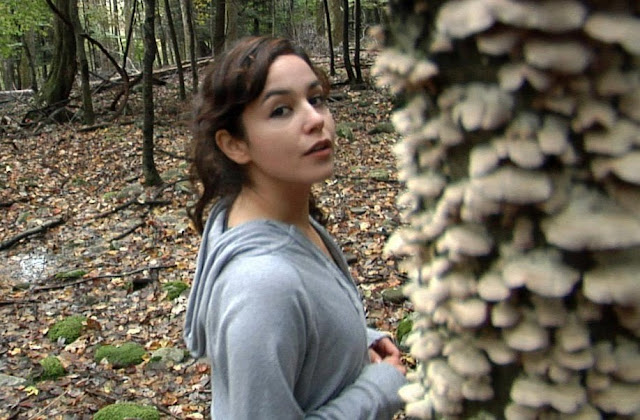 We return to the creepy framing story for some more creepy fun as members of the crew start disappearing and we start the third movie, "Tuesday the 17th"! I really liked this one, although I've read a lot of folks online felt it was one of the weaker stories. The title is an obvious reference to Friday the 13th (start counting days on your fingers) and personally, I thought it was a fun homage to camper/slasher movies. 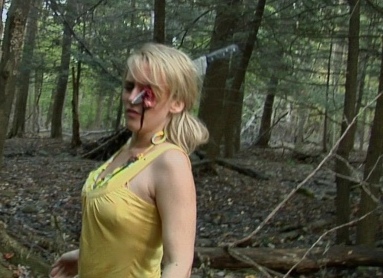 I think it might have actually benefitted from having just one more victim, believe it or not. The camera tricks were nice though, and the fact that the killer is either a) only visible as distortion through the camera or b) somehow just causing distortion on the recordings is a nice touch. 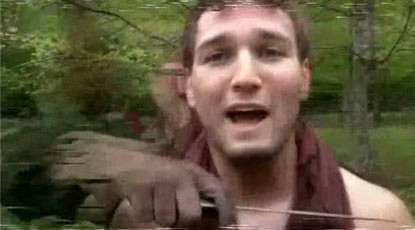 This was an interesting one, with spooky elements, a feeling of the woods being haunted by past victims, and an amped-up movie-style killer that just won't stop coming no matter what you throw at him. (I did question the presence of booby-traps since the main character would have had to go out there and set the traps ahead of time... which makes no sense). 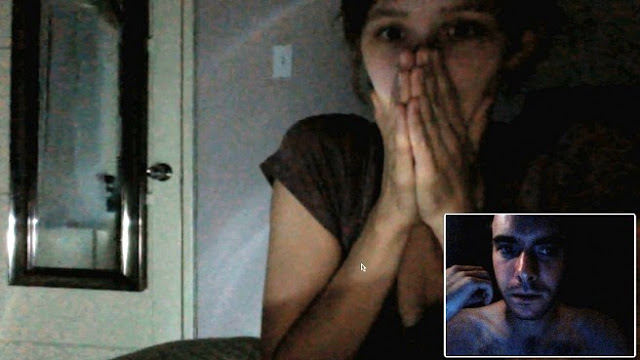 Then we're back to the framing story, and we jump into story number 4 "The Sick Thing That Happened to Emily When She Was Younger," which is MY least favorite story of the bunch. Here more than ever, it is apparent that this media (a Skype chat) should not be on a VHS tape. 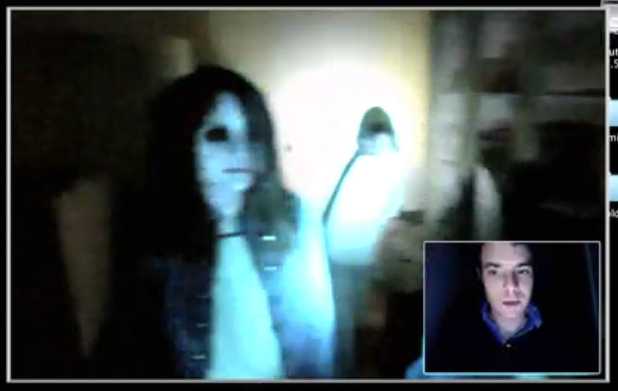 This whole story just irked me. The boyfriend character outright annoys me, the build up is kind of fun and spooky, but the payoff is just worthless. The girl who plays Emily is cute as a button and easy to believe, and I did feel bad for her ultimately, but the situation she's in just seems so ridiculous once you understand (sort of) what's going on that your sympathy kind of evaporates towards the end. 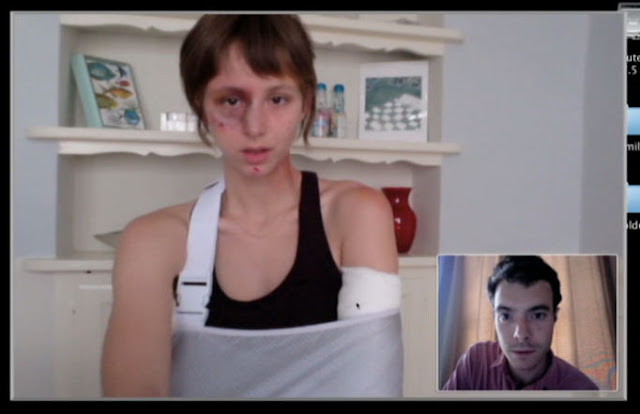 Honestly, I think dropping this story, and "Second Honeymoon," and making the remaining three shorts longer would have worked a lot more in the film's favor. They could have developed the stories a bit better and fleshed out the characters and stories a bit more. "Emily," and "Honeymoon," just feel like chaff to be sloughed off. 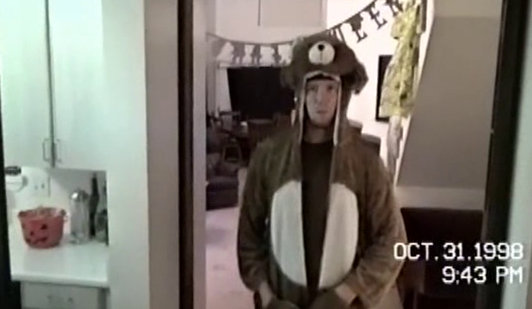 The final story kicks in AFTER the resolution of the framing story! Weird. There's no reason for this to make any kind of sense as we've been watching the videos through the eyes of the guys stealing the video tape. And spoilers, they're all dead by this point. So... Anyway. "10-31-1998" is my absolute favorite story of the bunch. It's a Halloween story, so that doesn't hurt it, and it stars a quartet of buddies going out on the town to a costume party and Haunted House. They get lost, show up at the wrongest of wrong houses, but don't realize it's the wrong place. 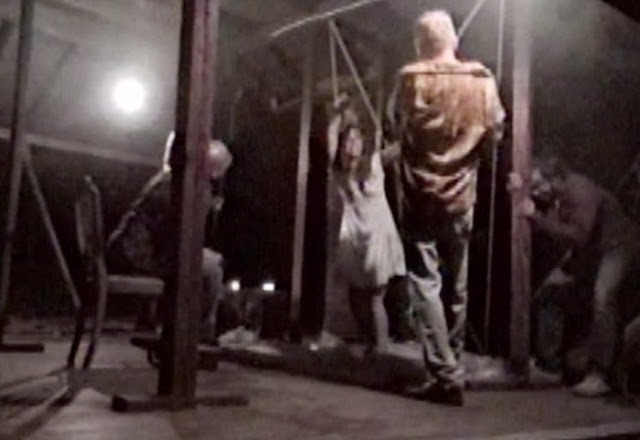 We don't get a lot of scares until after the guys go through what they believe is a Halloween haunted house and reach the attic, where there is some sort of ritual taking place, involving a group of men and a tied up young woman. The guys realize this is NOT a party or a put-on, and they rush in to save the girl and escape the house. THEN things get crazy. The house which has been creepy and ominous up to this point, with some off-screen event, and a few spooky happenings, gets cranked up to 11. 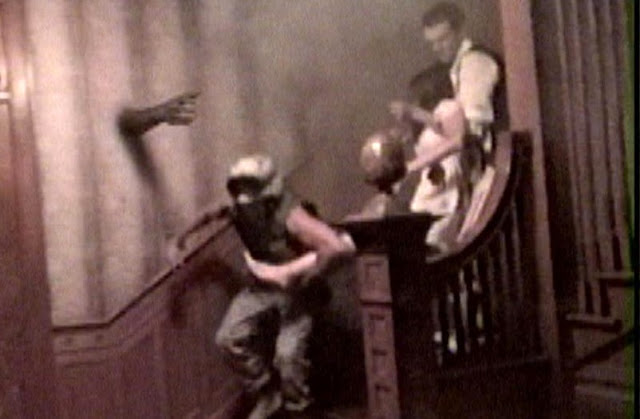 The house goes full-tilt Murder World on them, with inanimate objects hurling themselves at them, doorknobs disappearing from doors to prevent exit, and most impressive, arms and hands sprouting manically from the floors and walls to grasp and grab. I'm still not sure what the whole ending of this piece was all about honestly, I just have a deep suspicion that while the guys THOUGHT they were doing the right thing by saving the damsel in distress, they were decidedly WRONG to do so.


After this segment ends, we see a bunch of footage of the jerks from the framing story going about their recorded antics (they upload their hijinks onto the internet apparently) and then we roll credits, left with kind of a weird, dirty feeling. I repeat here again though, this movie should have been boiled down to three, better developed, stronger stories, and the framing story should have been polished up a bit more too. Overall though, I like this movie. I don't LOVE this movie, but I do like it. It has some genuine moments of fun, and some make-you-think concepts that were nice. On the other hand I could have done without some of the gross-out moments, the boring ones, and the what-were-they-thinking concepts that should never have made it in.

Well that's it for tonight kids! I'll be back with some Grim Goodwill Goodies soon enough! Until then, Happy Haunting!

Remember, I'm doing this countdown as a part of the official Countdown to Halloween, so be sure to pop over there and look and see who else is participating this year.
Posted by Derek Ash at 3:09 PM