Hey there kids! Today let's flip through the pages of a few short story anthologies I've picked up specifically for this year's Halloween Read Pile. 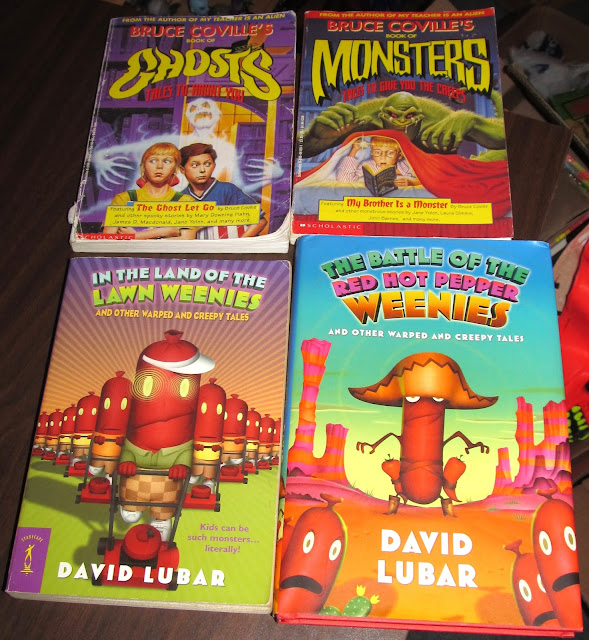 Here we have a group shot of the four books I'll be highlighting, two books each from two different series of books. Bruce Coville's "Book of..." series, and David Lubar's "Weenies" series. Let's dig right in and get talking spooky stories shall we? 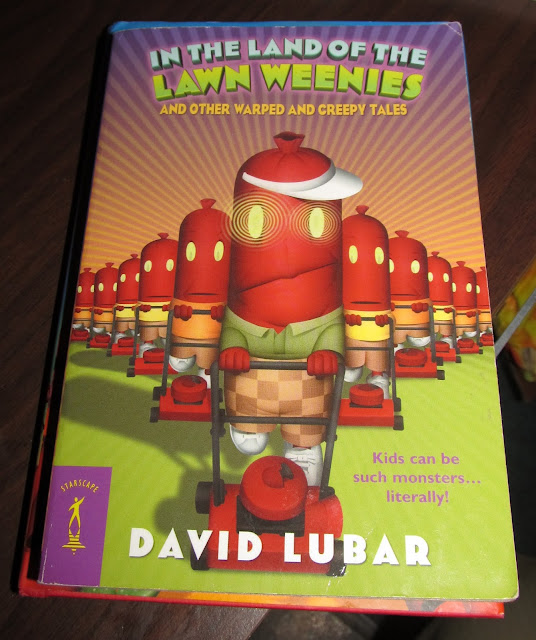 In the "Land of the Lawn Weenies" does not look at first glance like it would be a good Halloween read. I think I often passed over the Weenies books over the years because I assumed they were comedy anthologies. But in fact, the complete opposite is true. Lubar's shorter-than-short tales in the two books I'm featuring here are quite effective. They remind me quite a lot of the stories found in "Half Minute Horrors" which I picked up and read last year. 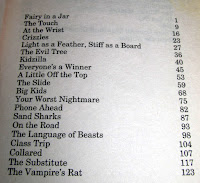 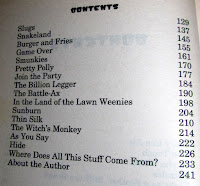 I felt like "Land of the Lawn Weenies," Lubar's first foray into Weenies territory, is a bit stronger than the other Weenies book I picked up, which I'll talk about below. The stories are unexpectedly bizarre, often deliciously mean-spirited, and some of them border on being genuinely disturbing.

Stories like "The Slide" and "Smunkies" stand out for the feeling that dread that Lubar builds up over the course of a very short period of time, and "Join the Party" manages to be just a little spooky while also being kind of an uplifting, bittersweet story. I felt like "The Evil Tree" and "The Language of Beasts" were a little weak, but almost all of the stories were enjoyable and over in the blink of the eye before I was shuttled along to the next. 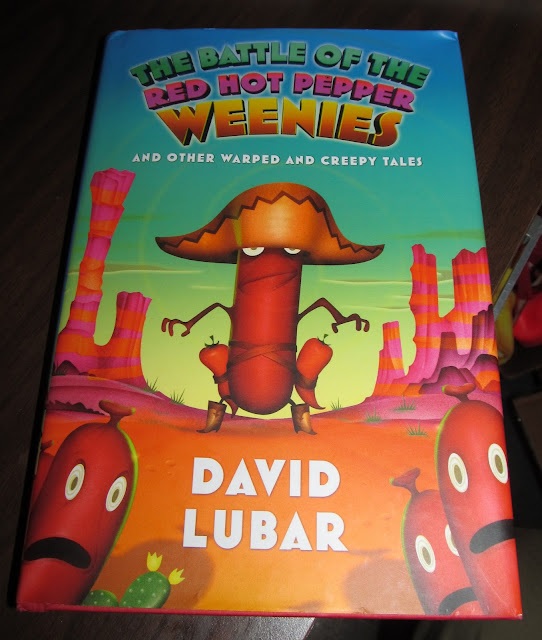 There are currently seven books in the Weenies series, and "The Battle of the Red Hot Pepper Weenies" is the one smack-dab in the middle and number four. And unfortunately, it feels a little bit like Lubar is writing a bit too much to cater to the format instead of simply writing stories that genuinely creep you out. There's six years between the two books I have here, and it feels like Lubar is kind of phoning this one in. There are still some great sotires to be found, but this one felt a bit more padded with filler than the previous one. He put out the most recent collection, number seven, in 2014, so I'd be curious to see how that one reads at this point. 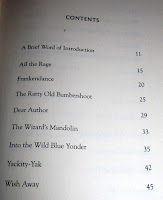 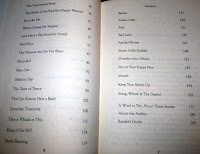 There is some shivery fun to be found in "The Department Store," "Braces," and a few others I can't even really recall at the moment, but waaay more of these just fall under the jokey or bizarre category, and the story "Dear Author" just feels like a nasty jab at readers who send him story ideas, or who at least claim to have done so. I might still check out some of the other Weenies books based on my great enjoyment of the first book... but I don't expect much from the later volumes. 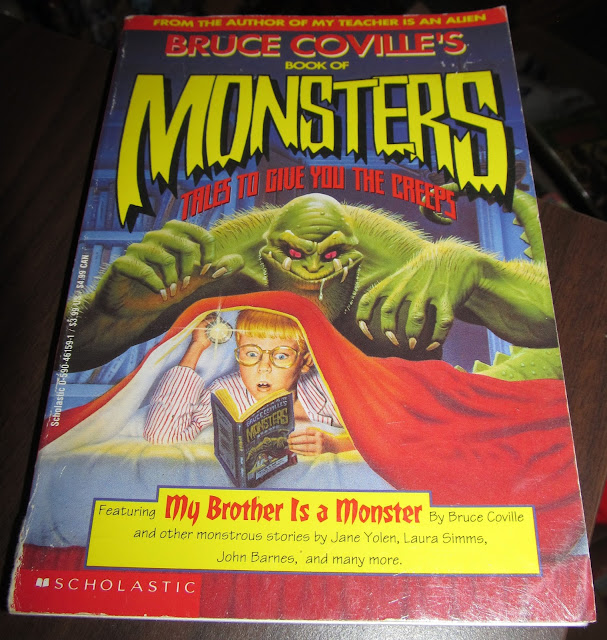 Bruce Coville is sort of the unsung, poor-man's R.L. Stine. I actually know him best from his "Into the Land of the Unicorns" series, which my daughter adored growing up... but he's also the guy who wrote all of those "My Teacher is an Alien!" books, and a bunch of Magic Shop books involving haunted or enchanted items bought from a magic shop (one of those, "the Monster's Ring" is a great Halloween read, although very similar to Stine's "The Haunted Mask") This "Book of..." anthology series is not solely written by him, which is a series that includes Books of: Aliens, Nightmares, Magic, Ghosts, Monsters, and Spine Tinglers. With many of those topics actually receiving second volumes as well, making for a total of somewhere around 10-12 books total. 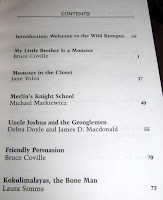 This time around, I'm talking about the weaker book first. This "Book of Monsters" was a semi-fun read but ultimately I felt a little cheated by the end. Many of the stories are just kind of weak, or jokey, or feel like advertisements for other book series. And as much as I like creepy folktales, I like my folktales to actually be creepy, not just kind of a bland retelling. Even Jane Yolen's and Joe Lansdale's stories, (which were each a paltry almost-three pages long) while fun to read, and would have made nice pallet-cleansing stories in a different collection, are pretty much just monster jokes. On the other hand... 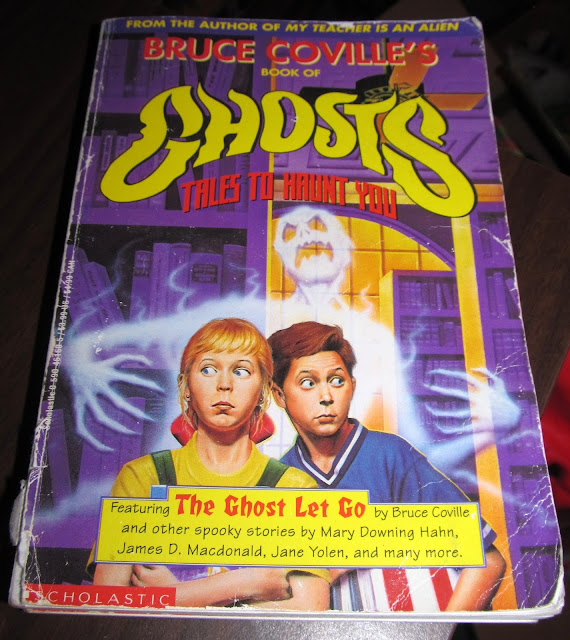 Bruce Coville's "Book of Ghosts" had a much better pay-off. There weren't many duds in this collection at all. Almost all of the stories had some sort of spook-factor to them. Even Coville's story, which included characters from some other book or story series, felt standalone and had some good moments of creep and bittersweetness to it. 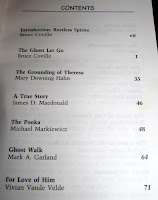 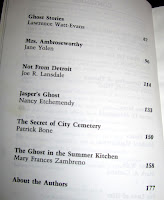 There's some great talent collected together here as well. We see both Joe Lansdale and Jane Yolen again, who are both personal favorites, and the ghost story maven, Mary Downing Hahn contributes a tale as well. "The Ghost in the Summer Kitchen" was a very nice tale, if slightly predictable, and "For Love of Him" by Vivian Vande Velde actually turned up later in a different anthology in my Halloween Read Pile, and I read through the story both times I liked it so much. I recommend this one very highly!

Overall, I recommend Coville's "Book of Ghosts" and Lubar's "Land of the Lawn Weenies" especially if, like me, you like to gather together creepy collections of short stories for your Halloween reading.

That's it for tonight kids! I'll be back sooner than you're probably entirely comfortable with to share more Gobliny Goodwill Goodies!

And remember, I'm doing this countdown as a part of the official Countdown to Halloween, so be sure to pop over there and look and see who else is participating this year.
Posted by Derek Ash at 7:22 AM