Hey there! Today's post is going along with the anthology theme AND along with the stuff-I-found-at-Goodwill theme! It's a goocher! Let's take a look at some books I picked up that were put out by Whitman publishing in the 60s! 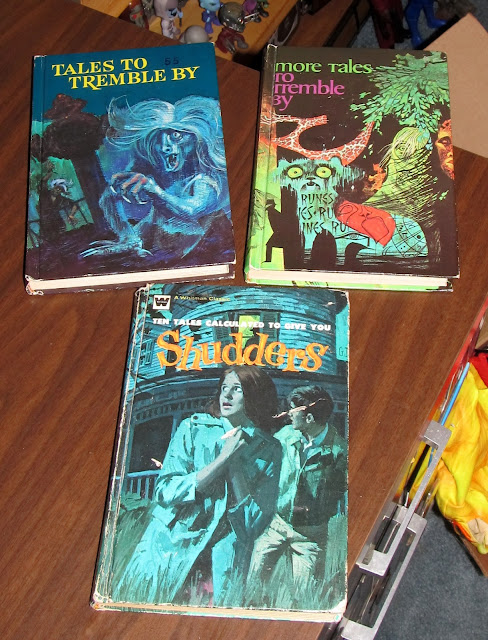 Before we move on I just want to take a moment to drink in the covers of the three books together for just a moment. These things were cheaply made and distributed back in the 60s, and I had quite a few of Whitman's books on my bookshelf as a kid, including versions of the Wizard of Oz, Robinson Crusoe, and a few others. They all have the same lightweight feel due to pasteboard covers and bindings that are more glue than stitching. But just look at that cover art! Let's get a closer look. 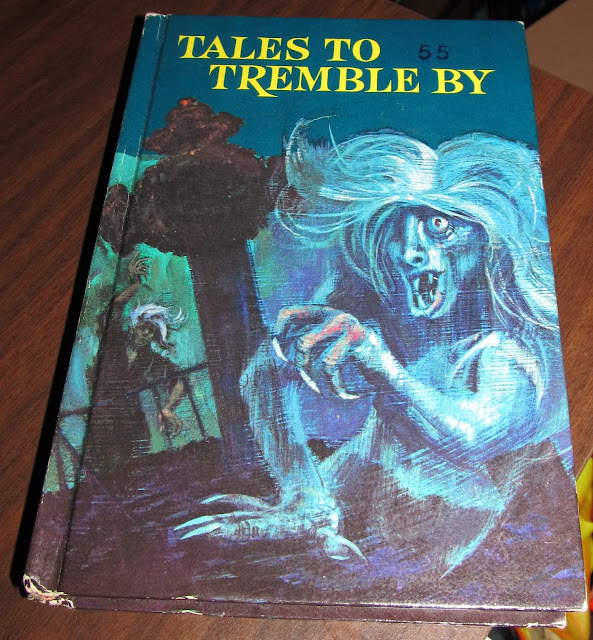 The first book is called "Tales to Tremble By" and I cannot figure out who the cover artist is but LOOK AT THIS THING. 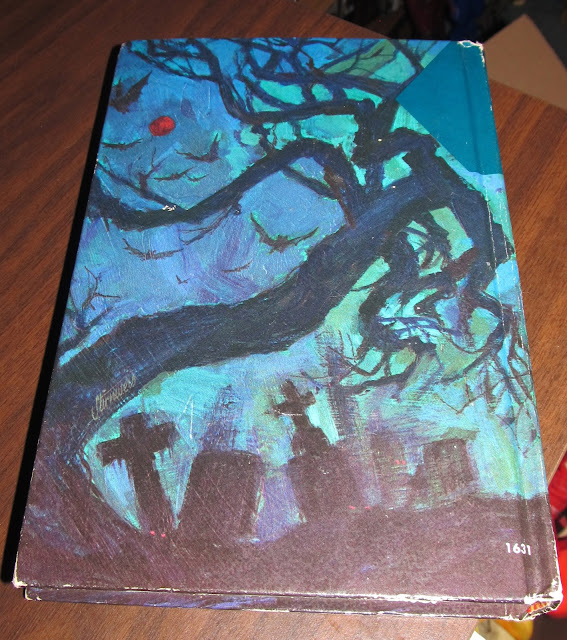 It's a wraparound cover, but the back isn't nearly as exciting as the bizarre, clawed spirit on the front. 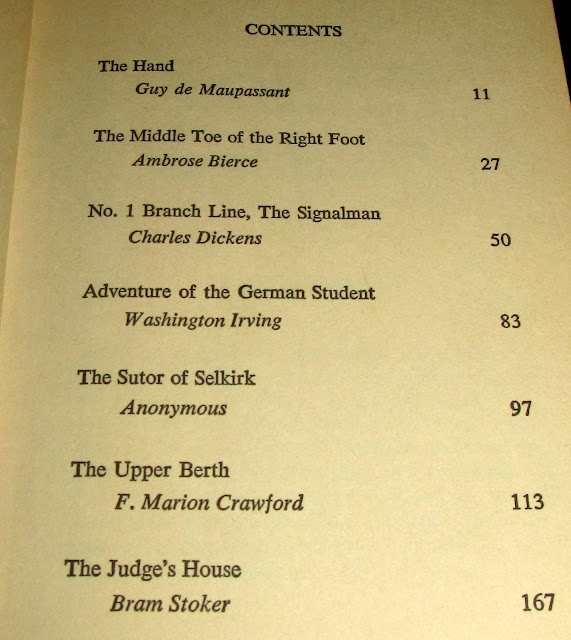 None of the stories are dud by any means. They're all creepy and atmospheric and each one deals with a different type of haunting. I would say the slimy water-logged ghost of "The Upper Berth" and the ever classic "The Judge's House" by Bram Stoker are my absolute favorites though. But honestly, there's not a stinker in the whole bunch. I was very pleased! 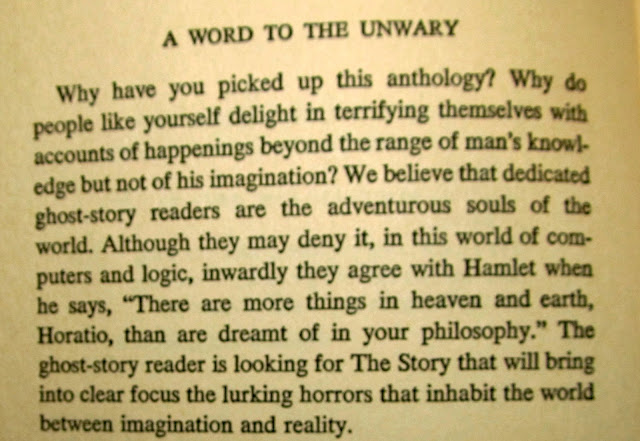 I love the introductions to these books as well. You can really tell someone was having fun and wanted to get the reader excited. 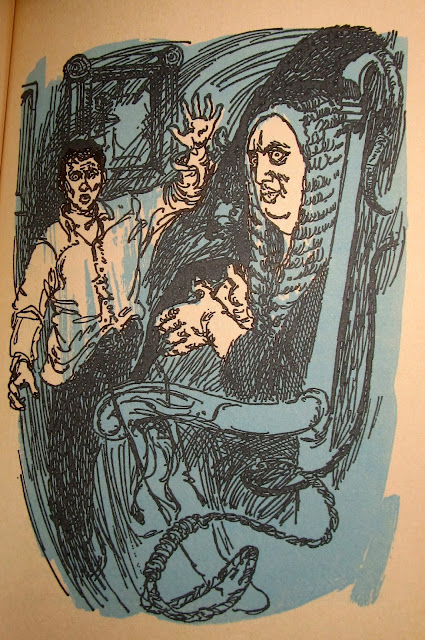 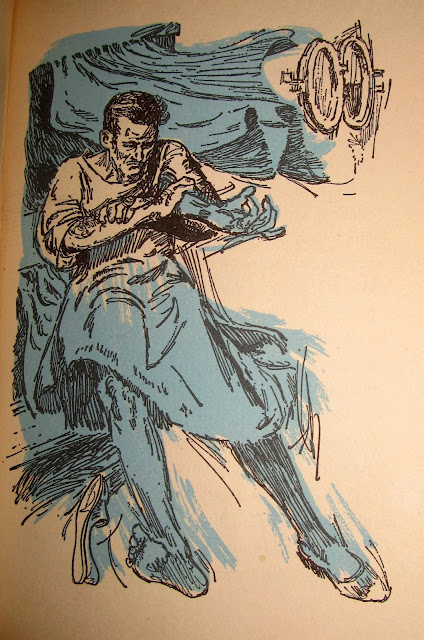 And here is a picture from "The Upper Berth". The interior illustrations were credited to Shannon Stimweis and while they are serviceable... they aren't amazing. 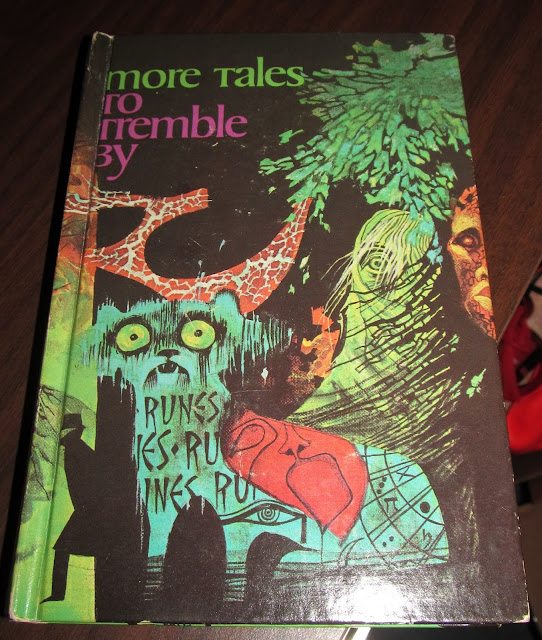 The second volume in the Tales to Tremble By series us the ante in almost every way. This cover is INSANE. Additionally it references the stories in the book! Upon reading each story within I would then scan the cover to see where the reference was hidden in the details on the cover. It also helps that the artwork, on both the cover and interiors, done by Gordon Laite, is much more dynamic, animated, and eerie. 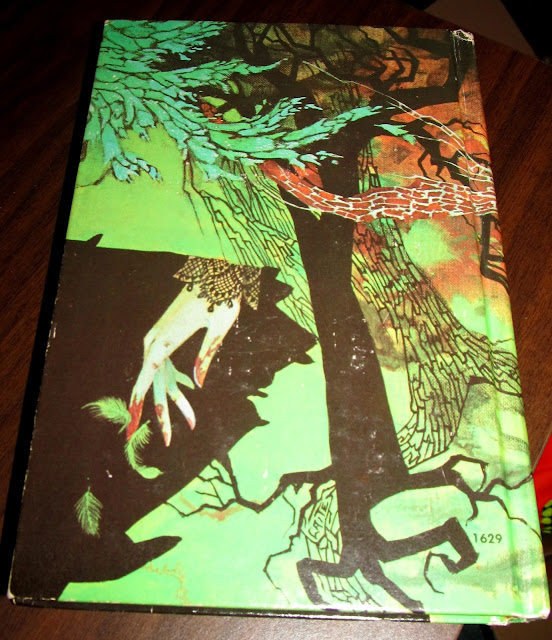 This time around there are even some points of interest on the back cover. 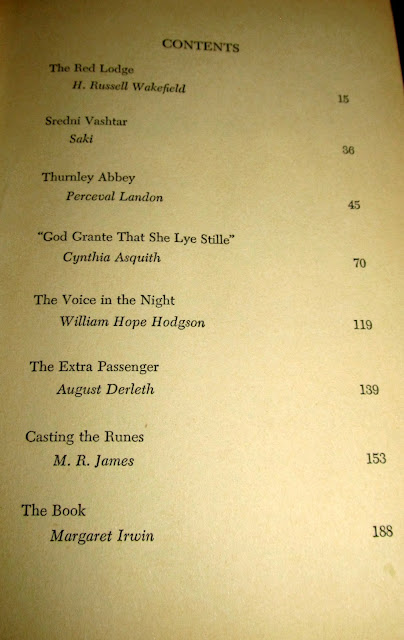 And while the first book was good, the second book is even BETTER. Every single story seems to have a bit more bite to it than the last. "The Red Lodge" is a genuinely disturbing story of a family's holiday in a house haunted by some particularly repulsive spirits. "Sredni Vashtar" is a mean spirited little tale with a very satisfying ending. "The Extra Passenger" is a creepfest all around, featuring justice from beyond the grave, and "The Book" was a deliciously dark entry featuring the downfall of a family man due to some late night reading. "The Voice in the Night" is one of the earliest examples of disturbing "body horror" that I can think of. I would say the real star of this volume was "God Grante That She Lye Stille" however, as it spent the most time building atmosphere and had some genuinely shocking twists and turns. 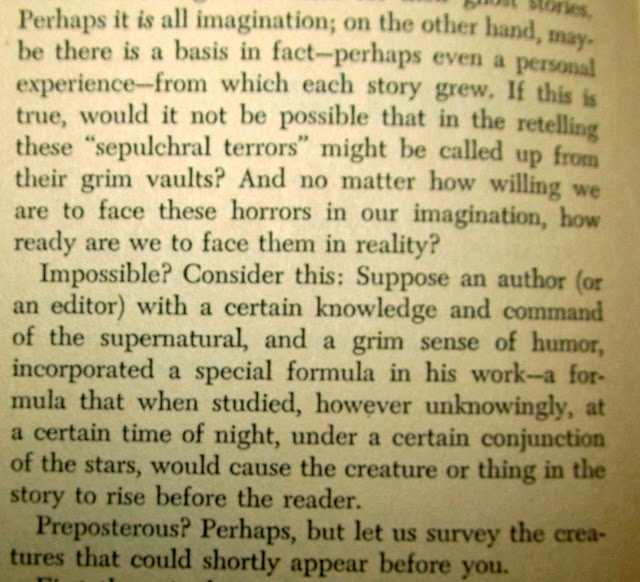 Even the introduction to the second collection kicks it up a notch, suggesting that by simply reading the stories within you may end up summoning the things featured in the stories to haunt you. 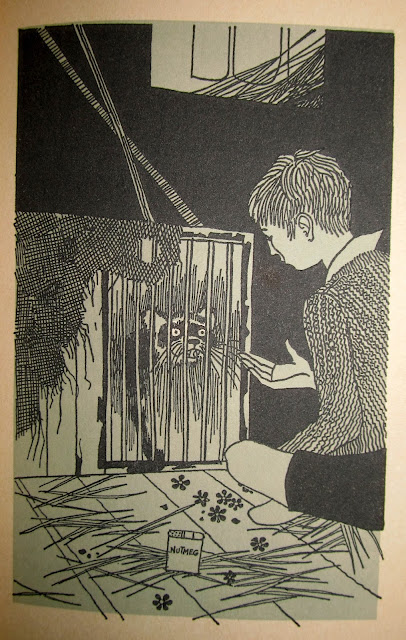 Here we have the boy from "Sredni Vashtar" worshipping at the altar of his fearsome "god". 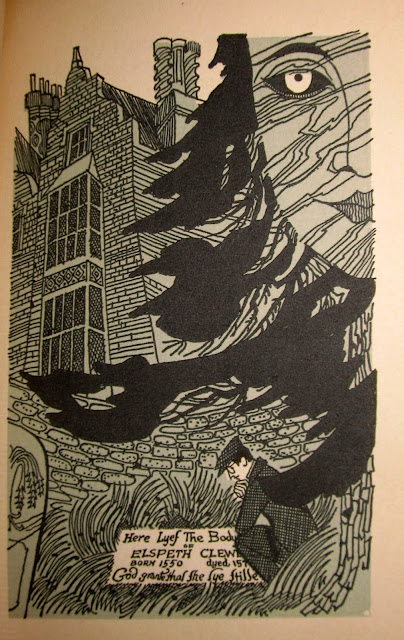 The illustrations from "God Grante That She Lye Stille" were so good I included two of them. Here's the narrator visiting the gravestone that holds the titular phrase. Dig that spooky spirit face watching him though! 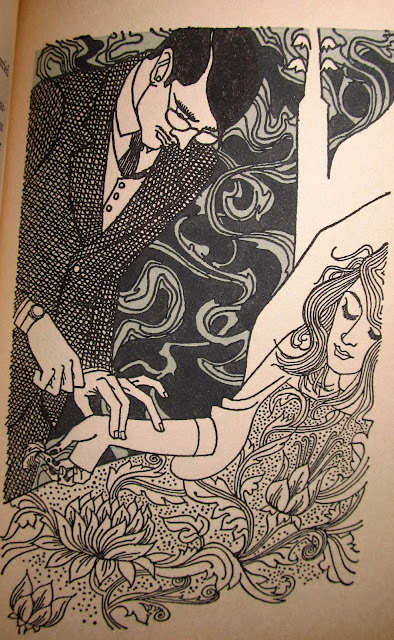 The trippy patterns and facial expressions in this illustration just make it gorgeous. 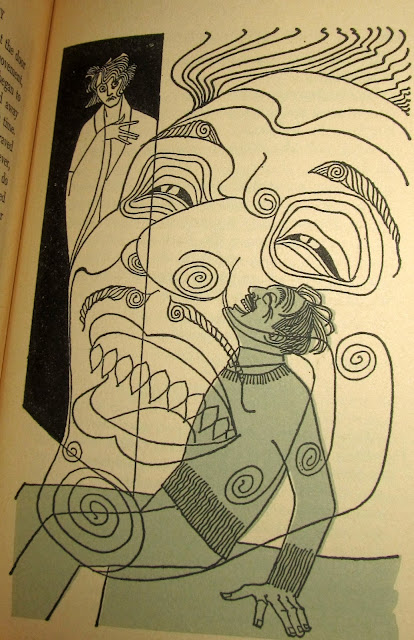 And here we have the father from "The Book" just absolutely losing his s**t. I LOVE the curlicues used to detail his face here. 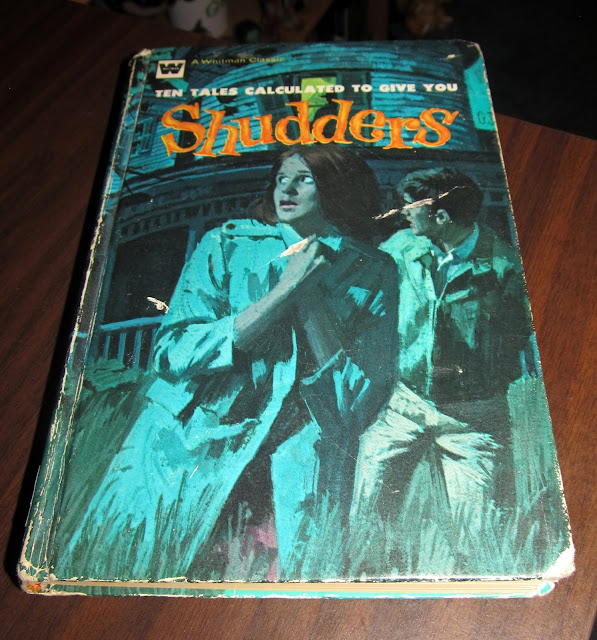 Finally we have "SHUDDERS," or possibly the whole title is "Ten Tales Calculated to Give You SHUDDERS" which I love the idea of a bunch of scientists sitting around, deep in calculation on how to make me shudder. 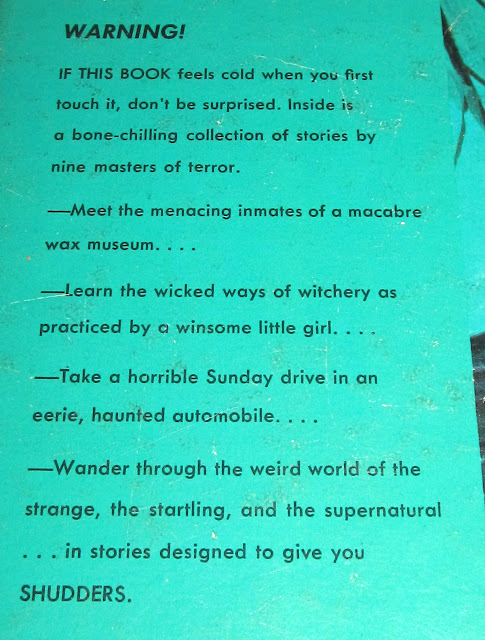 If this book feels cold when I first touch it? Awesome! I love these little details. You never see stuff like this anymore. 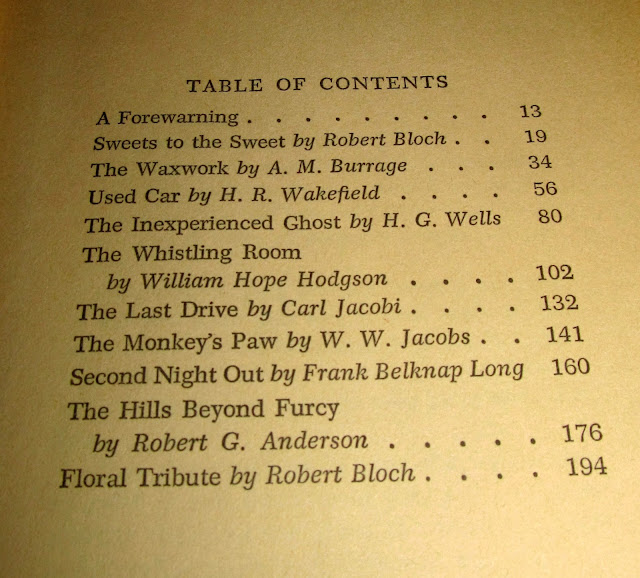 This collection has one of my all-time favorite stories, which is "Sweets to the Sweet". I was SO excited when I saw this was included! I first read this story as a kid and was completely enamored with it. Robert Bloch really is an amazing writer, and luckily he has two entries here. Again though we have a book full of stories that will not disappoint. I think if I were to cut any story it would have been H. G. Wells's "The Inexperienced Ghost" but only on the basis that it does not really fit the tone of the other stories, not because it isn't a good read. "The Monkey's Paw" is just a classic, and one of my absolute favorites, "Used Car" felt so similar in mood and tone to "The Red Lodge" from the previous book that I wasn't surprised to discover it was the same author! H.R. Wakefield was really very good at instilling dread in his stories. 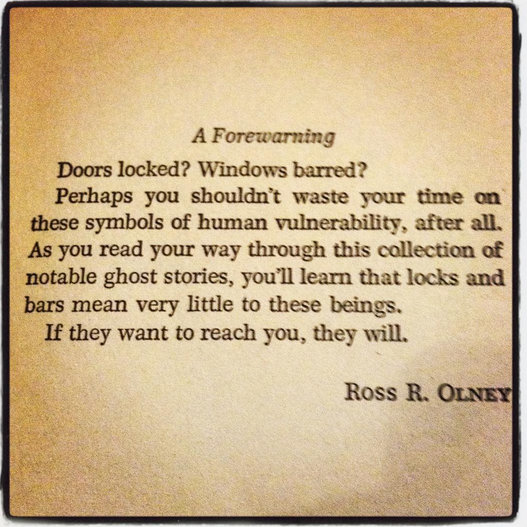 Also, the introduction to "SHUDDERS" isn't above pretty much just flat-out threatening you with bodily harm. So... enjoy!

I have to say there are few things I enjoy more than curling up with a good collection of supernatural tales for the Halloween season, and these old anthologies really hit the spot! The next time you're out thrifting, don't discount older looking collection of ghost stories because you think they'll be to dusty or out-of-date. These are some of the best kinds of tales to read as October progresses!

That's it for tonight kids! I'll be back soon with more Groaning Goodwill Goodies... so until then, Happy Haunting!
Posted by Derek Ash at 6:44 PM