Hey there everybody! Today I want to get back to TV anthology shows for another look-see.

Monsters was an anthology show that lasted for 3 seasons. It was pretty low-budget and had some pretty awful episodes, but it also had some incredibly fun and memorable episodes regardless of its handicaps. 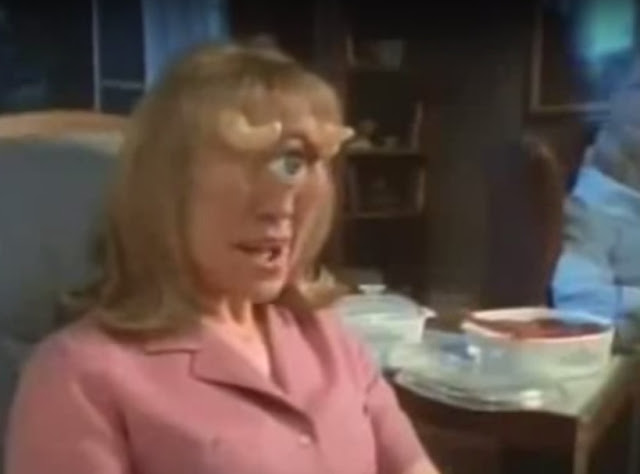 The opening sequence was one of the best aspects of the show to be honest. It features a family of suburban monsters huddling around the TV in the living room to watch their favorite TV show: Monsters! The mother and daughter appear to be from a Ray Harryhausen pedigree, with their horns and cyclopeon eyes. 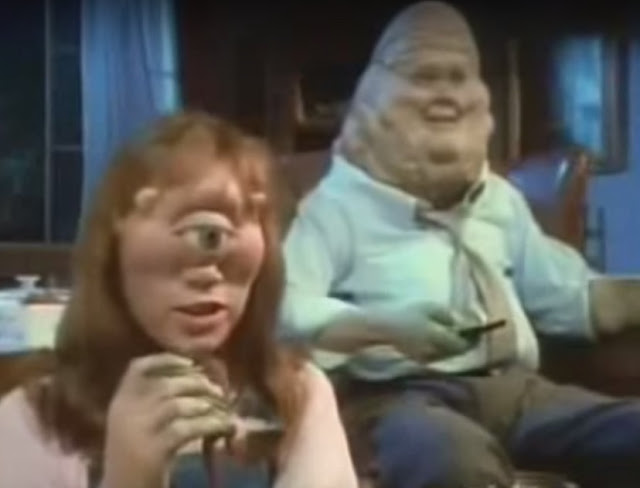 The father is a potato-headed lumpy mass with one normal arm and one arm that looks more like a gnarled tentacle. They settle in with their assortment of disgusting snacks for a shared family viewing of the show. And the episode I want to talk about today is "Small Blessings," which really stood out to me as a kid. This is a pretty fun one, honestly. It's all very tongue-in-cheek, played for laughs, and full of some pretty subtle humor mixed with some fairly blunt sight gags. 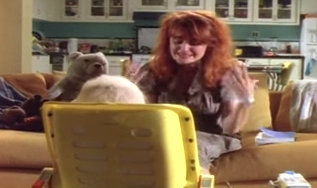 For an episode of Monsters, it's honestly a bit tame... but it does have some bite... Julie Brown plays new mother, Wendy. I remember the fact that Julie Brown was doing an episode of the show was a really big deal to me at the time. I knew her from MTV and from Earth Girls Are Easy, and she was funny as heck!

It isn't clear what's so different about Wendy's situation right away compared to most new mothers. The viewer KNOWS something is off because 1) they won't let us see the baby as Wendy is trying to convince it to sleep and 2) this is "Monsters". 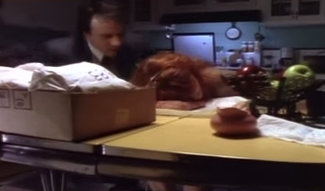 We soon find out that baby Eric is a fanged, meat-hungry freak baby. His parents love him regardless, though Dad Louis (played by Kevin Nealon) is much more accepting of their bundle of joy than Wendy is. Wendy is having a hard time accepting Eric for who he is, considering baby Eric has been known to disfigure visiting relatives that get their ears too close to his mouth. 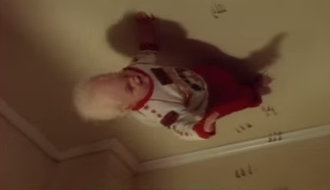 For the most part, Eric is played by a fake looking series of dolls. There are a few close up shots that Look a bit better... but if you're looking for sharp, polished effects here... move on. You just have to kind of go with the flow on this one. 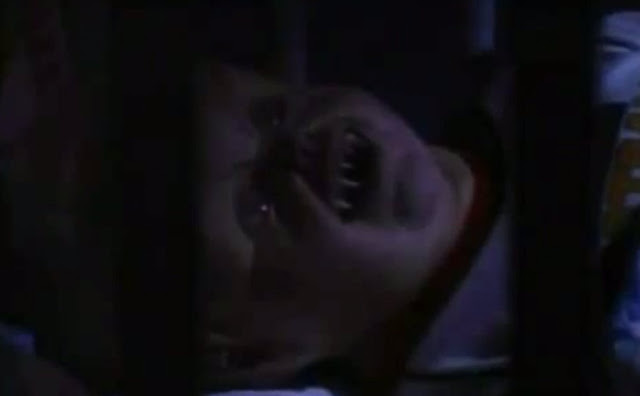 Eric is quite the handful. He almost never sleeps. He regularly breaks out of his crib and gets into mischief (like on the ceiling above) and unlike most cranky newborns, Eric was born with a full set of sharp teeth and a hunger for: 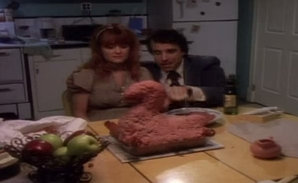 Raw meat! In fact, the meat delivery boy (played by David Spade) comments on how much meat the family has begun buying. Wendy just despairs over the fact that there are only so many ways she can serve raw meat to her hungry boy. 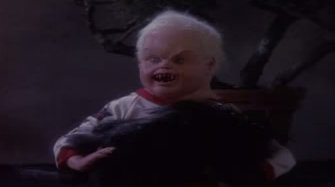 Unfortunately, it turns out that several pets, and even some people, have been the victims of horrible violence just recently. And Wendy suspects Eric is the culprit. Especially one night when he gets loose and shows up on the front porch with a neighbor's half-eaten pooch. 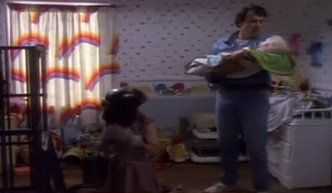 In one of the episode's funniest moments, we see Wendy welding a cage in Eric's nursery to keep him contained while dad tries to comfort the child. Domestic bliss! 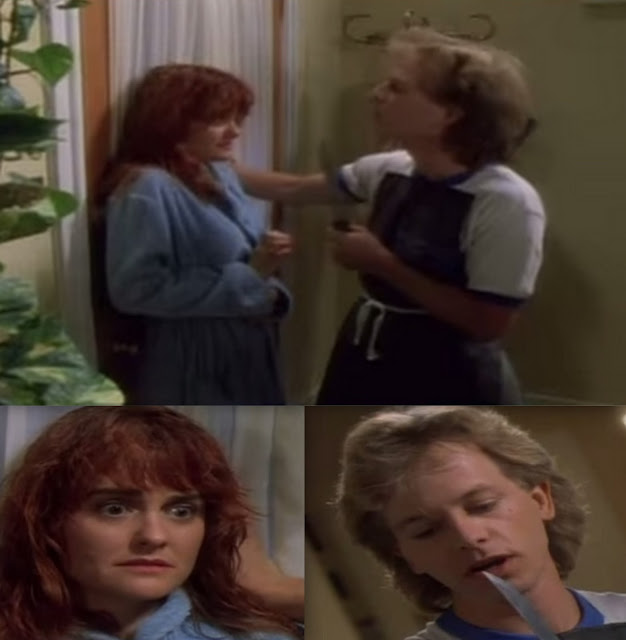 But then plot twist!!! Wendy discovers it ISN'T Eric after all whose been going on the killing spree! It's actually Teddy, the meat delivery boy! He's a psycho and he wants to become a famed serial killer! 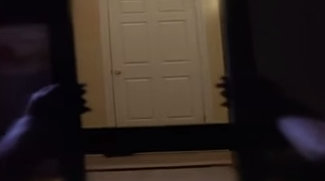 Lucky for Wendy, either her welding skills are crap, or Eric is just getting stronger and more aggresiv by the day, or both... because Eric hears Teddy menacing his Momma and breaks free! 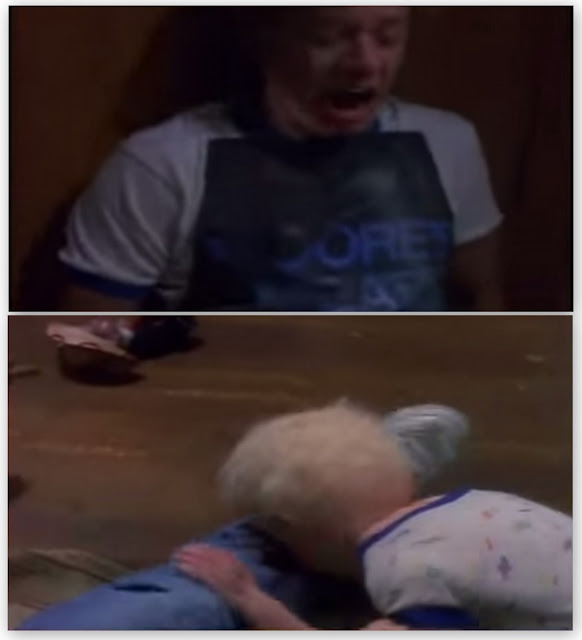 The inanimate doll that is obviously NOT a baby of any kind takes a bite of Teddy's leg and sends him running for the hills. Wendy finally accepts Eric in her heart when she realizes the baby loves her too despite his... abnormalities.

Now honestly, David Spade's character should NOT have escaped. It is my one major gripe about this episode. I don't even care that the baby looks fake! It's kind of funnier that way! But Teddy should have been straight up eaten by Eric the monster baby. There is no excuse for not having the episode end that way. Wendy and Louis could still share the warm embrace with their freakish son while he was contentedly digesting a belly-full of meat-delivery boy. Where was this episode's sense of ironic justice!? Could they seriously not have picked up a plastic Halloween skeleton, squirted some blood all over it, and draped Teddy's signature apron over it? It could have been EPIC. But overall, I forgive it for just being so stupid and fun to watch. You can tell Nealon really has some fun delivering his lines defending little Eric, and Julie Brown actually does a great job acting as Wendy the beleaguered mom. overall, I would recommend this episode, but caution viewers to keep their expectations loooow. A lot like many of the other episodes of Monsters actually. But therein lies its charm.

That's it for today kiddos! I'll be back soon with more Grizzly Goodwill Goodies! Until then, Happy Haunting!

I'm doing this countdown as a part of the official Countdown to Halloween, so be sure to pop over there and look and see who else is participating this year.
Posted by Derek Ash at 6:04 PM