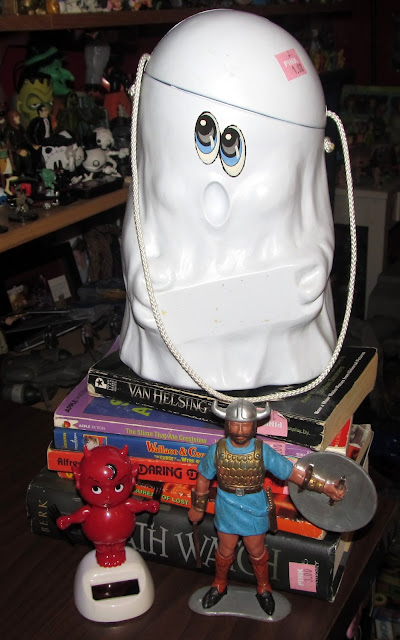 There's actually two group shots here to show everything off. It just all looked really crowded in one giant shot so I tried to break it up a little. 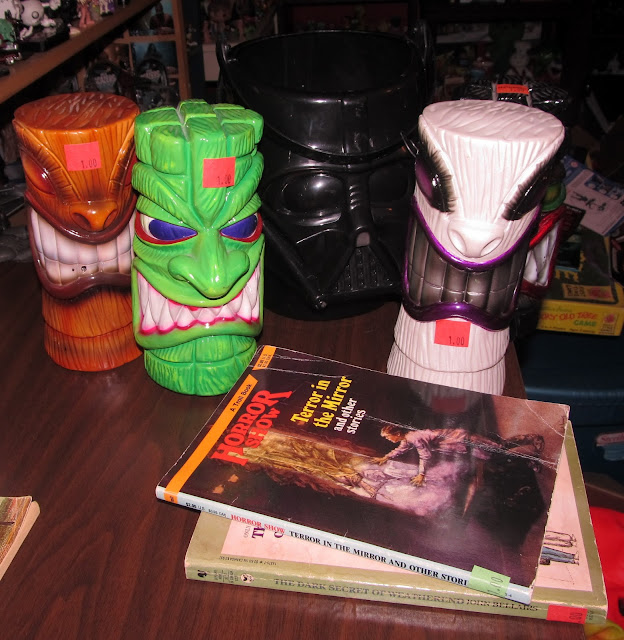 As you can see there was quite a lot of fun stuff I discovered, so let's check it all out! 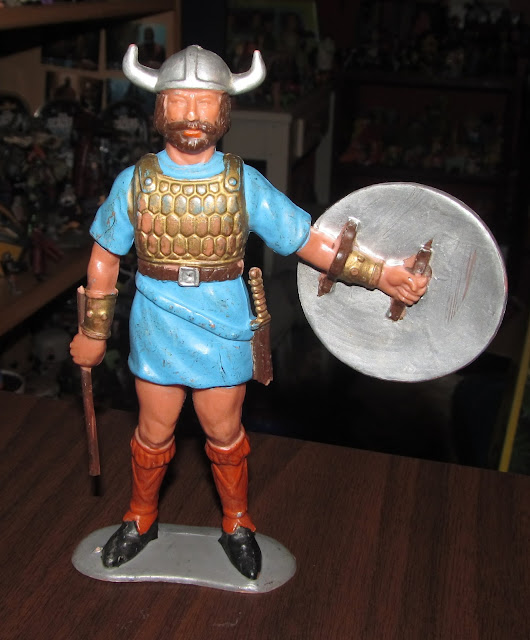 This first one I hemmed and hawed over whether to include it with the Halloween stuff or not. In the end I decided to go for it. We'll pretend he's your brother-in-law, Gary, dressed up for a Halloween Party. In reality this is "Gustaf" from the Marx Toys line of viking figurines. There's not year stamped on the base, so I have no idea when this was produced. I really like the old-style feel of these Marx figures though. 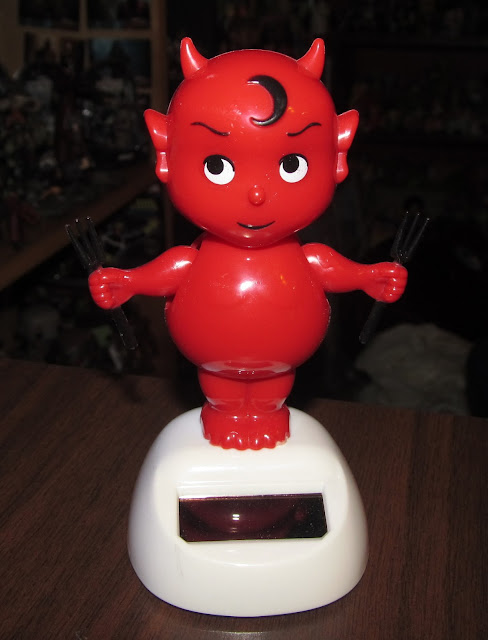 This is more like it! This adorable baby devil dances when you place it in direct sunlight. I could honestly do without the base completely though. Or it would have been nicer in black. The devil is just the freaking cutest! I have a little devil collection going and this fits in quite nicely. 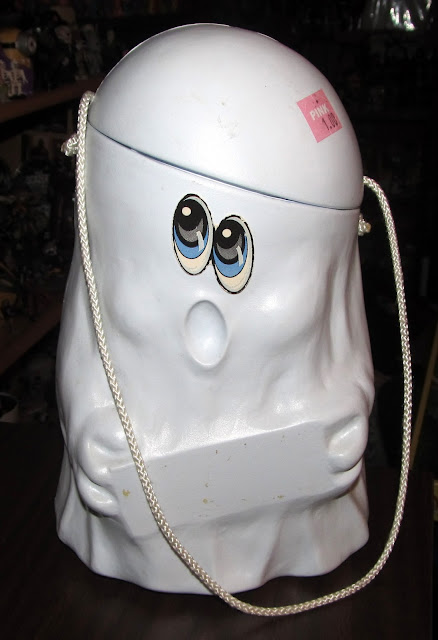 This ghostly fellow is a Mars Trick or Treat Pail! He used to have a Snickers sticker to make it look like he was holding a Snickers bar. The fact that it wa missing was almost a deal breaker for me. I felt bad leavng him behind though... and so I got an idea: 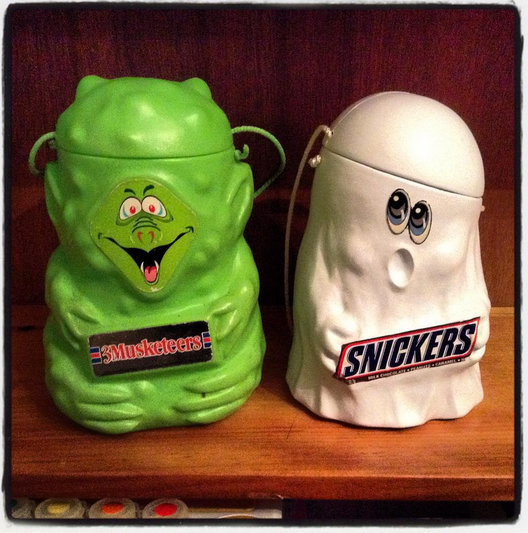 So I patched him up! It doesn't fit perfectly, but for my purposes he's just fine. My wife has the goblin holding the Three Musketeers Bar, so now all I have to do is track down the Pumpkin pail holding a Milky Way Bar and I'll have all three! 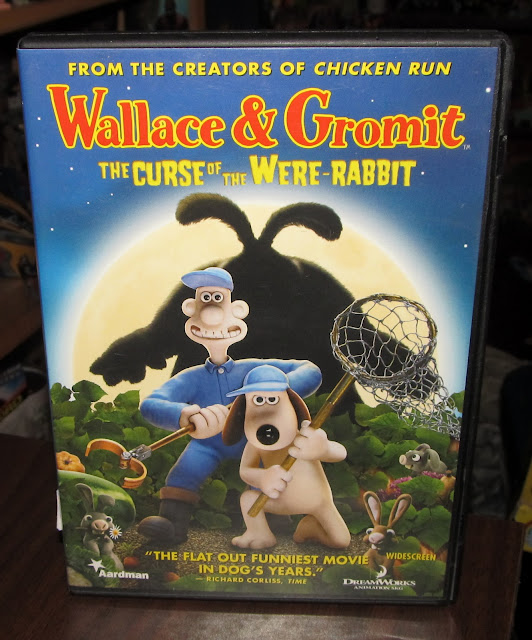 This was a nice surprise! In with the DVDs I found a copy of "Wallace and Gromit: The Curse of the Were-Rabbit" which I will be watching with my boys this season! 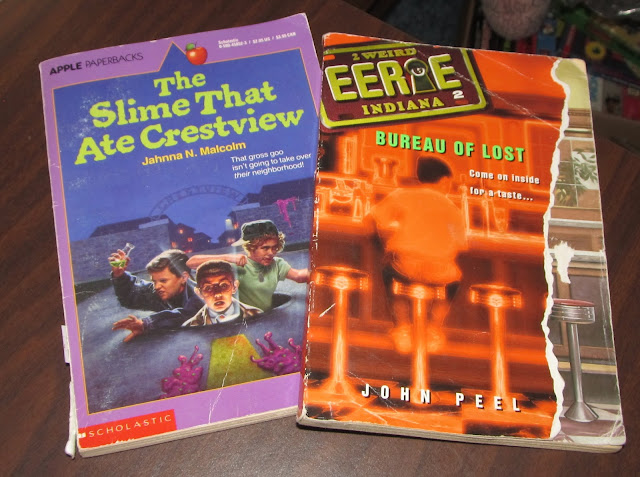 Anything "Eerie Indiana" related gets an automatic pass into my shopping basket at Goodwill. So "Bureau of Lost" was a no-brainer. And "The Slime That Ate Crestview" has a couple of things going for it. First, it's about a blob-monster (a mold/slug/hybrid to be clear) and those are some of my favorite kinds of monsters. Secondly, it was written by Jahnna N. Malcom (which is actually a married couple, not an individual) who wrote the excellent "Scared Stiff" which I bought and read last year as a part of last year's Halloween Read Pile. This Slime book went onto this year's pile and was devoured in less than a day. While it wasn't quite the same caliber of creepy as "Scared Stiff" it was still a very fun read. 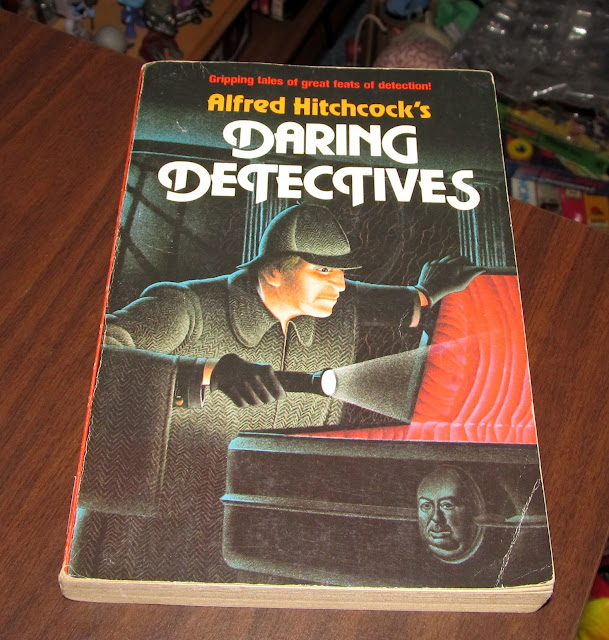 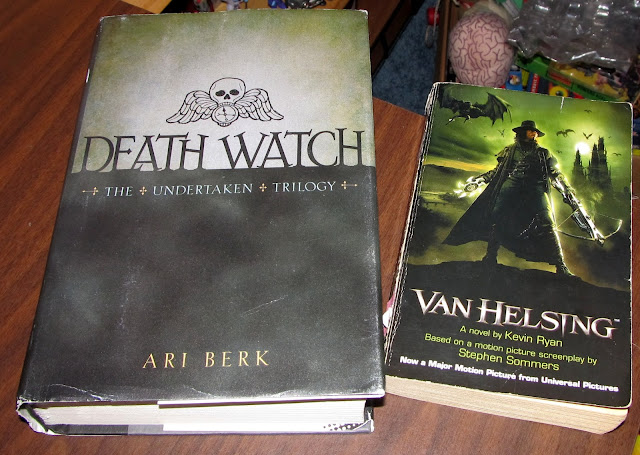 I thought this book, "Death Watch" from The Undertaken Trilogy looked interesting. It has all to do with death, the afterlife, and the chosen few that protect the border between the two? Maybe? Or maybe not that at all. Anyway, it sounded interesting. And I can't resist a movie novelization even if it is for "Van Helsing" which I've never watched all the way through. 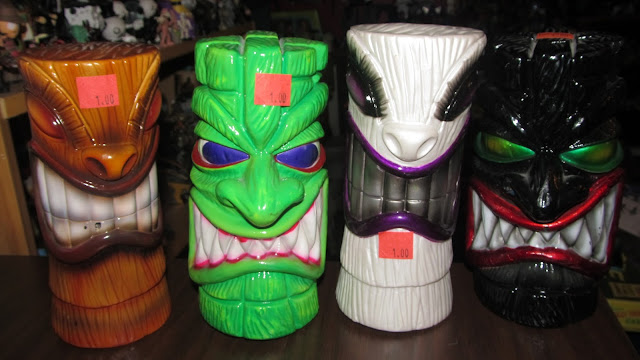 THESE GUYS! These looked fun, and though my original plan was to only pick up the green and white ones, the whole set begged me to bring it home, so I did. Only the black one on the far right was actually in the Halloween merchandise. The others were actually scattered all over the store, one in the toy department, and the other two on end caps near the front registers. These are some sort of custom jobs as they have artist stickers on the bottoms, identifying who did the paint jobs: The first one in brown was done by Craig Judd, the green and white were done by Larry Salazar, and the black one had no identifying sticker, but looking them up online it looks like another Salazar too. These things are called Hot Rod Underground Tikis and they come in about 4 different sculpts, and several different paint designs from different artists. While these are more items I don't 100% consider to be Halloween, I felt like they fit well enough. 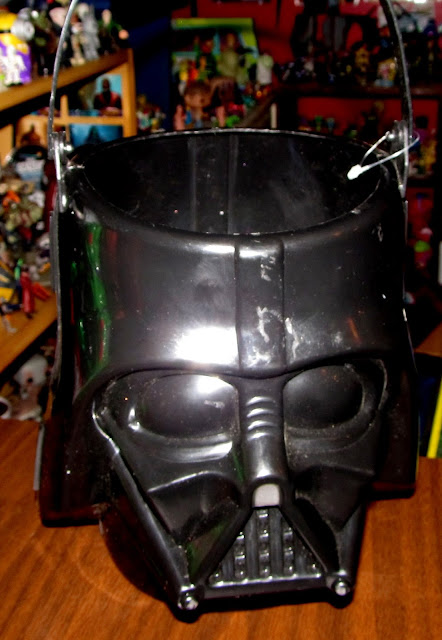 A Darth Vader trick or treat pail came home as well. I don't really have a ton to say about this one, honestly. There it is. 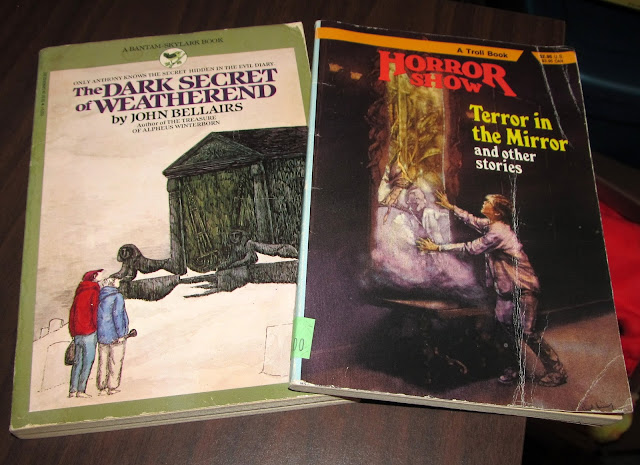 Finally, it is a rare day when I manage to find a John Bellairs book that I don't already own. So "The Dark Secret of Weatherend" was a pleasant surprise indeed! "Horror Show: Terror in the Mirror and Other Stories" just might make it into this year's Halloween read pile... but it also might not. We'll see. It's pretty BOOKED up already! Ha! See what I did there?

Well that's it for tonight kids! I'll be back soon with more Grizzly Goodwill Goodies! Until then, Happy Haunting!

(UPDATE!!! Dex of AEIOU and Sometimes Why has posted an interview with me as a part of his Halloween Web series! Please be sure to go give that a look, as well as all of the other interviewees has already featured, and will continue to feature throughout the month!)

I'm doing this countdown as a part of the official Countdown to Halloween, so be sure to pop over there and look and see who else is participating this year.
Posted by Derek Ash at 9:06 AM