So this post is going to sort of serve as a dumping place for a BUNCH of Halloween stuff I've found in previous weeks but wanted to share in October. This was, for the most part, not all bought at the same time, although much of this is probably all from no more than about three different trips to Goodwill total. There's a good mix of toys, spooky books, games, and other junk, so it'll probably be a nice assortment with a little bit of something for everyone. Let's check it out! 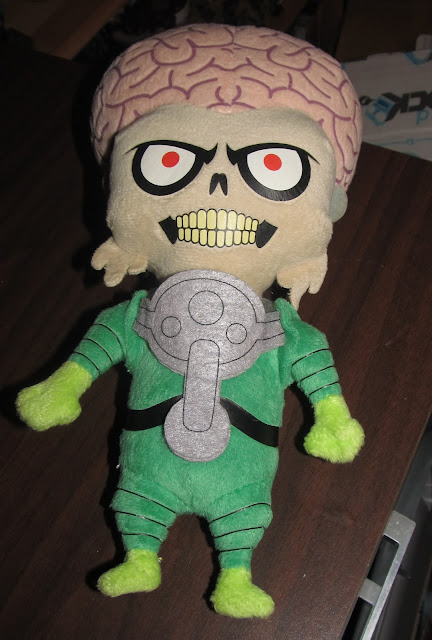 I found this "Mars Attacks!" claw-machine refugee for a dollar about a month or so back. He looks great with my stuffed Walking Dead "Well Zombie" sitting around gnashing their teeth at one another. 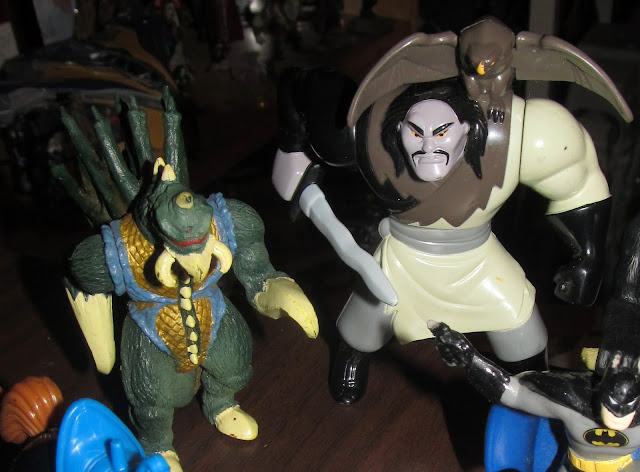 These guys were a couple of awesome finds in a grab-bag with some other toys (there's Batman, a Gorilla, and a horse I think? Just out of frame here... but these two guys were the Halloween-iest) the fella on the left is a Kaiju by the name of Gigan. I have had a lot of really great luck either finding or being given a bunch of these Trendmaster figures featuring Godzilla monsters. These are exactly the scale I want these in, and since watching even a single Godzilla/Kaiju film is still an item on my bucket list, this level of commitment it perfect for me. I am in LOVE with the character designs, and have a bit of a crush on Mothra if I'm being honest.

Next to Gigan we have Shan Yu, the villain from Disney's Mulan. I'm not really a Mulan fan per se, but I am a fan of this huge, gray, imposing, zombie-looking warlord with a giant buzzard on his shoulder. Shan Yu's eyes in the movie are actually a thousand times more disturbing than they are right here on this toy... but I think if they had accurately reflected the depths of soulessness in Chan Yu's creepy peepers, kids would have been crying into their Happy Meals and defecating uncontrollably (and not just from the McDonald's food). He is currently menacing my Scooby Doo action figures, because honestly he looks like someone from a Scooby Doo episode, right? 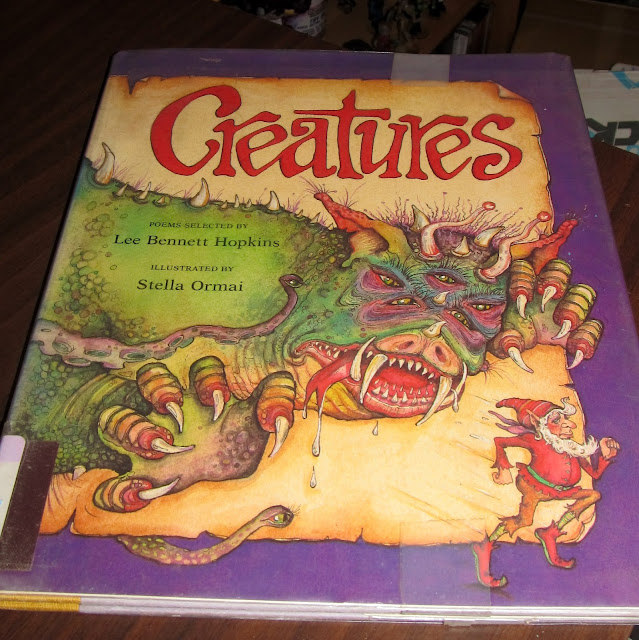 "Creatures" is a collection of poetry compiled by Lee Bennett Hopkins and illustrated by Stella Ormai. I have vague memories of this book from when I was a kid, which was why I picked it up, honestly. But it was disappointing. I was expecting more monsters and less gnomes, fairies, and sprites. This book desperately wanted to appear to be a Halloween book (I mean look at that cover!) but unfortunately there are only about 4 or 5 poems in the whole book that fit the bill. 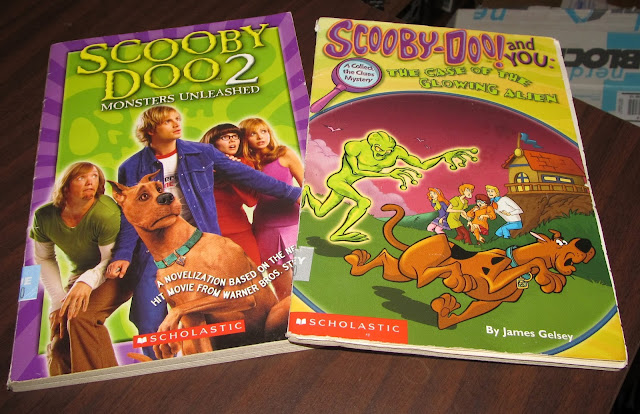 Some Scooby Doo Chapter books! The first one is the novelization of the second movie, which I felt was wholly superior to the first live action movie, although neither of them was truly what I considered to be "good" Scooby Doo. The monsters in Scooby Doo 2 were the really fun part. I've been compiling a collection of chapter books to share with my boys and, as is the case with "The Case of the Glowing Alien," Scooby Doo pretty much always comes home from Goodwill as my kiddos genuinely adore ol' Scoobs. 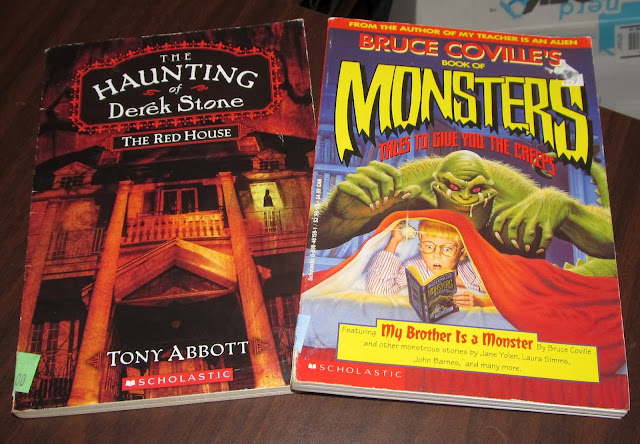 I brought these two books home together. I plan on giving Bruce Coville's "Book of Monsters" a bit more attention in this very countdown, so let's ignore it today. Instead, I want to talk about "The Haunting of Derek Stone: The Red House" by Tony Abbott. I found a book that collected the first two Derek Stone books together in one volume sometime last year and FELL IN LOVE WITH THEM. This is a great example of me picking up some random book by some random author at Goodwill and discovering a new series of books that I just fall in love with. Derek is facing the threat of an undead ghost army overtaking the land of the living, and even though this is a YA series, it makes your flesh CRAWL. I'm shocked at some of the stuff Abbott gets away with in these books! Great read, highly recommended. 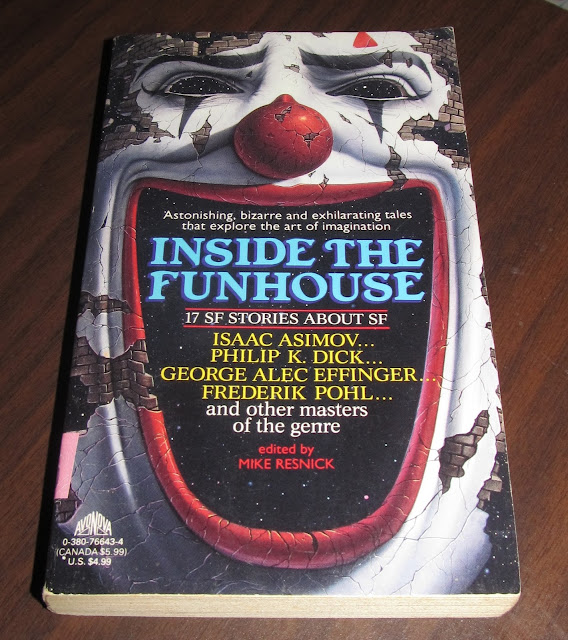 This isn't a horror collection. It's a collection of sci-fi stories about... sci-fi story writers I guess? But the cover is absolutely horrifying. So I'm including it here. Behold and be afraid. 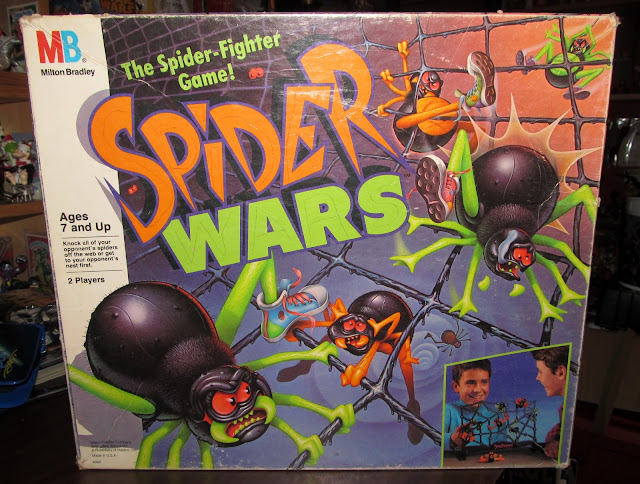 Here's a fun one! Spider Wars by Milton Bradley circa 1988. This is a nice looking game with fun pieces and a really fun looking web-style playing surface/thing. Check out those spiders on the cover, and the awesome spider-figures in the game! This thing screams Halloween in black and neon orange and green. This one came complete with the whole shebang, except for one vital thing: 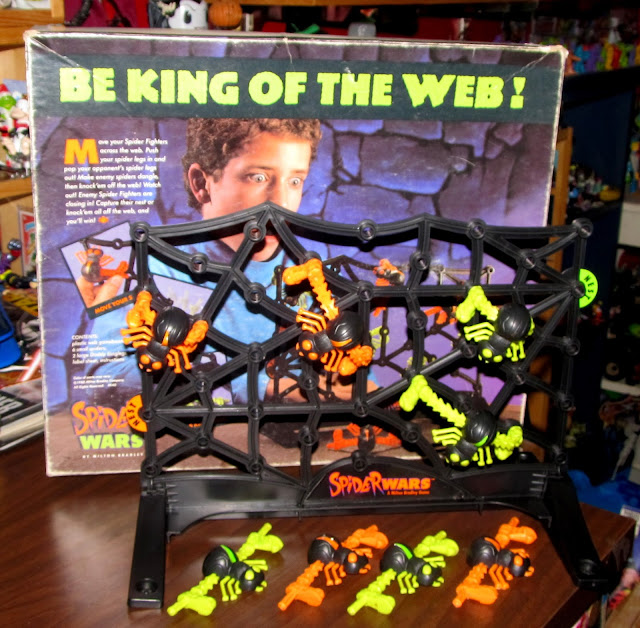 I really desperately need to get my hands on a copy of the directions! There are some very basic mechanics of the game that don't make sense when we're trying to play. I have in fact play tested this with my 6 year old son and we did have fun, but I feel like there are some rules we are not observing that we probably should have to make this game a little less one-sided? 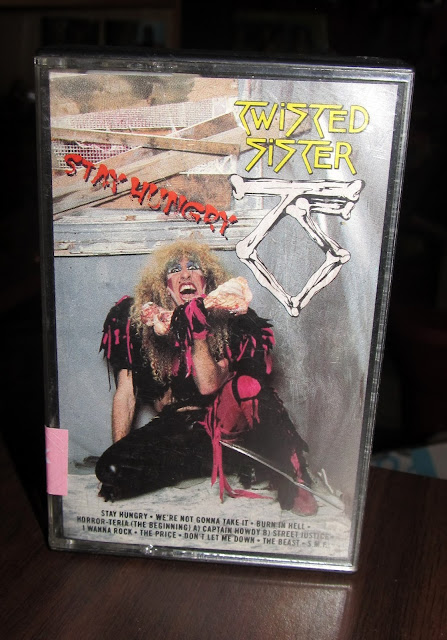 Twisted Sister, and Dee Snyder specifically, gnawing on his raw meat, scared the CRAP out of me as a kid. This cassette has "We're Not Gonna Take It" and "I Wanna Rock" included, which are great songs. 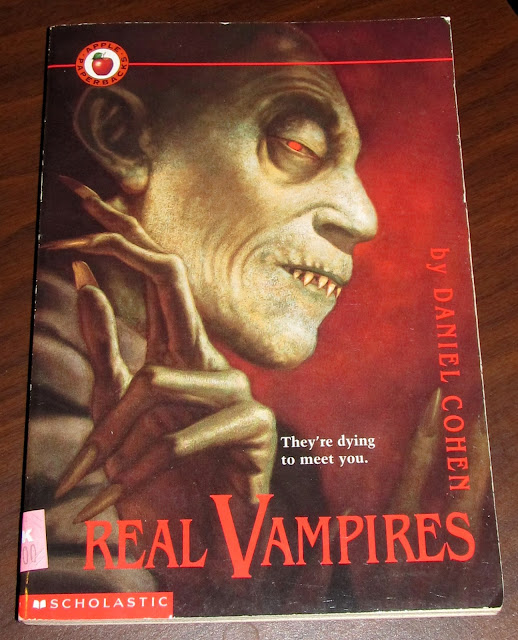 This is a collection of vampire lore compiled by Daniel Cohen called "Real Vampires," which I have to contest the title of a bit... but check out that cover art!!! Anyone know who this is? I can't find reference to the cover art in the book anywhere. Anyone recognize this work? I want to see more! 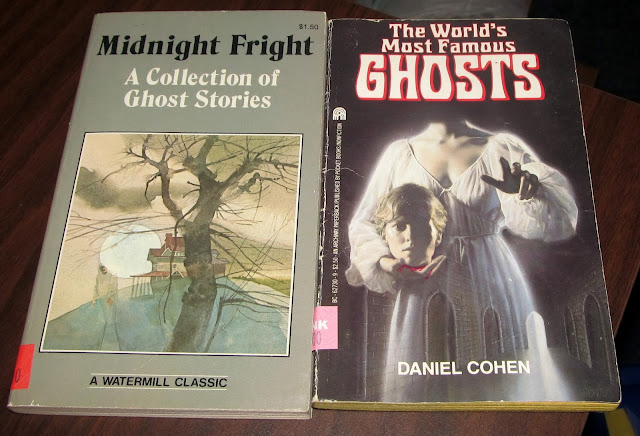 No Halloween season would be complete without a couple of cheap Ghost Story collections! We can see Mr. Daniel Cohen hard at work again with "The World's Most Famous Ghosts" and a Watermill Classic collection: "Midnight Fright: A Collection of Ghost Stories" I probably won't be reading either of these before next Halloween, but I've added them to the potential Halloween Read Pile materials. 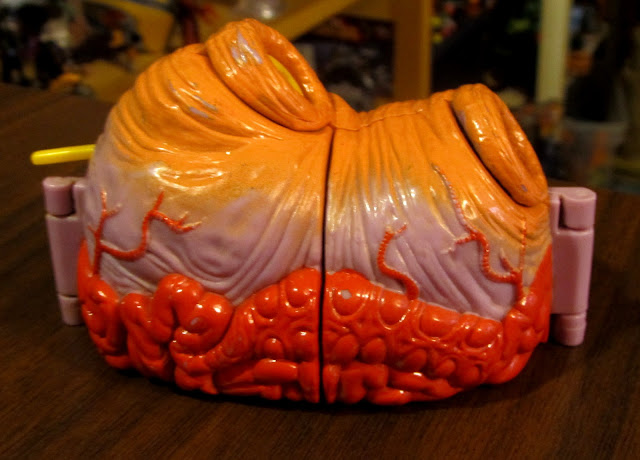 This was a fun find! From "Those Characters From Cleveland" (The creators of Madballs, My Pet Monster, Popples, Strawberry Shortcake, and many more) an on-again-off-again subsidiary of American Greetings, comes Body Wars!

These were Mighty-Max/Polly Pocket style fold-out mini-playsets, featuring germs and anti-bodies fighting each other for control of various internal organs that folded out into battle stations! Unfortunately this stomach I found didn't come with any of its characters or accessories, but I still found it be be gross and endearing. Had Body Wars come along when I was a bit younger (These came out in '94 when I was about 16 and in highschool so no dice...) I would have been OBSESSED with them. This is exactly the kind of thing I loved as a kid. 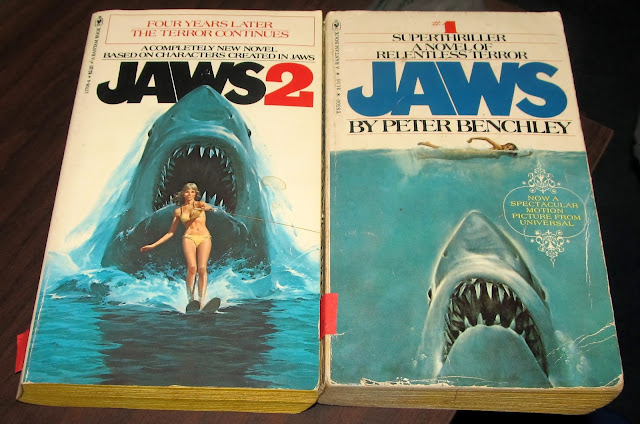 I never say no to horror movie novelizations. It kind of irks me looking at this picture that I have the books out of order. Ugh. Who does that? Me I guess. But anyway. I love the original Jaws film, and because my friend Miss M loves the whole franchise with a level of passion bordering on public indecency, I have learned to appreciate the other films as well. This will not be the last time you see a Jaws novelization during this countdown. We're going to need a bigger blog.

And that folks, is where I leave you on this, m second post of the countdown to Halloween! I'm doing this as a part of the official Countdown to Halloween, so be sure to pop over there and look and see who else is participating this year. As always, I will be back with some more Garroting Goodwill Goodies sooner than you'd like... so until then Happy Haunting!!!
Posted by Derek Ash at 3:50 PM