HAPPY OCTOBER!!! LET THE COUNTDOWN BEGIN! Every day this month I will be posting something Halloween-y to get keep us moving right along to the big day!

This October, I have decided I'm going to try a (semi) running theme. Not EVERY post I drop into the blog this month will fit with the theme... But I'm going for... most?

So I'm kicking things off with an old favorite anthology horror film of mine. This was something I originally watched on Showtime when it came out back in 1993. 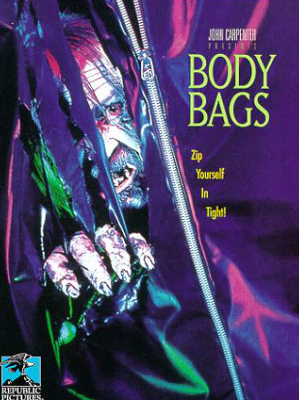 John Carpenter Presents: Body Bags! I haven't watched this one since back in the day, but I have many a fond memory of the movie. I couldn't wait to see it, so I fired it up on YouTube and gave it a go.

SPOILERS IN FULL EFFECT from here on out, just a warning. 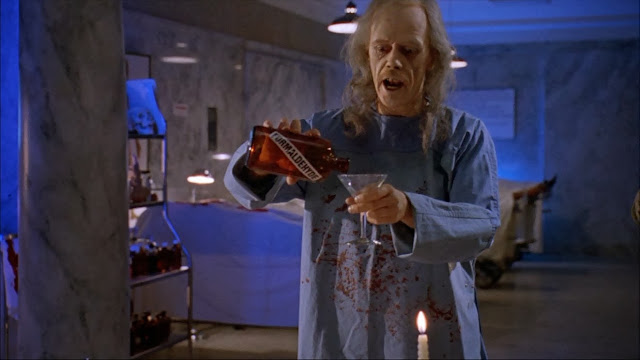 The framing story is actually incredibly clever in execution. John Carpenter himself is obviously having a blast hamming it up as "The Coroner" in a morgue. He is our disgusting Cryptkeeper in a blood-spattered smock. In the truest horror-host fashion, he's irreverent and ghoulish in equal measures. He takes us on a tour of the morgue, trying to find interesting deaths to share with the audience. This is fantastic. I love seeing John Carpenter in his disgusting makeup, channeling more than a little of Michael Keaton's Beetlejuice in his gallows humor delivery. 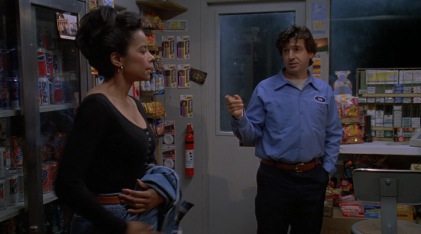 The first tale is "The Gas Station" and while it isn't especially original in concept or hard to predict in execution, it is fun. And fun is the name of the game for me on this one. We have a pretty good idea of who the menacing psycho is going to end up being from the get-go, so all of the atmosphere and build-up feels a little unnecessary... but that doesn't mean it isn't appreciated. The story has a little bit of space to breathe, and it doesn't feel too rushed. Frankly, I was in love with this story as soon as the location was revealed to be a gas station! The banality of the setting, plus the isolation, the time of night, the inescapable fact that this is a real situation that real people find themselves in... well it is an EXCELLENT situation to set a horror film in. Robert Carradine's gas station guy "Bill" is the very first character we're introduced to, and he plays it exactly like he's that guy you always meet on the first day at a new job. Kind of awkward, kind of helpful, not sure what to make of you yet. He doesn't do even ONE Revenge of the Nerds laugh though, which is kind of disappointing. 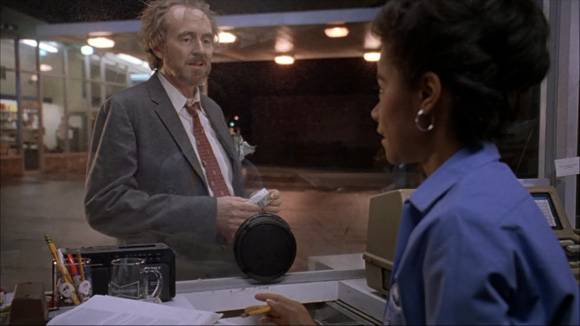 Alex Datcher plays Anne as a plucky heroine, and we're pulling for her from the start. She never overdoes it reaction wise, and she never seems stupid. She makes a couple of dumb mistakes like locking herself out of her booth and exploring a restroom alone, but we can almost, almost forgive her these as we can see ourselves having to deal with the same crap at our own jobs. Maybe not the EXACT situations, but similar ones. For the most part Anne reacts in realistic fashion to the events of the story. It never really feels insulting or contrived, which is nice. The REAL draw of "The Gas Station," however, has to be all the sweet, SWEET cameos! We have Wes Craven show up as a more-than-a-little creepy customer, who to a first time viewer must surely stand out as a prominent suspect destined to return later to menace again. And may I just say that Wes puts in an amazing performance here, given how little he had to work with? He's is creepy as HELL. 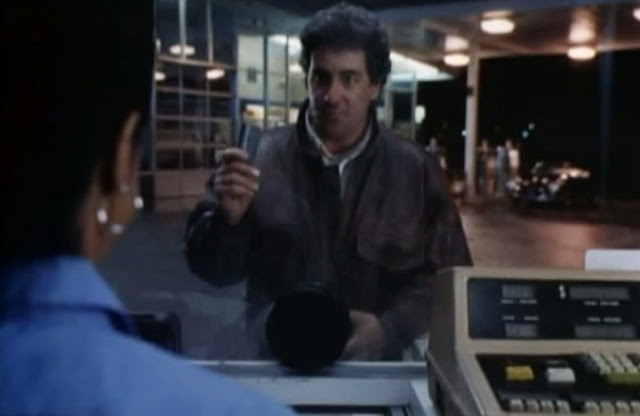 Then of course we have another horror pro, David Naughton (of An American Werewolf in London fame) putting in an appearance as the WAY-too-nice-NOT-to-be-a-serial-killer guy. His charm and his good looks and his charisma all scream, "He will wear your skin like a Halloween costume!!!" Because this is a horror movie and anything that appears to be overly nice, charming, cute, beautiful, wholesome, or just generally good in any kind of way is probably out to kill you. Except when it's a red herring (and even sometimes when it IS a red herring). 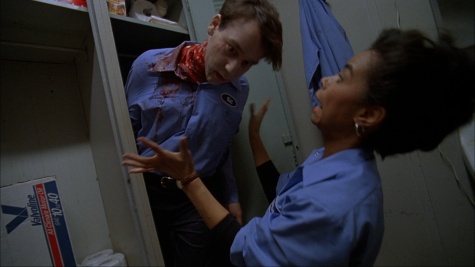 Of course, Sam Raimi's dead body is the real "Bill" and Robert Carradine is the killer, which was kind of obvious I guess. But how cool is it that Sam Raimi, Wes Craven, and David Naughton all decided to show up for this thing? Plus horror movie (and Carpenter film perennial) Buck Flower as a homeless guy! This is the stuff that makes "The Gas Station" by far the best of the three tales shared. They sort of blow their load in the first third, leaving us to wonder what could possible top this in the next segments. Answer: Nothing.

There are also various throwbacks to Halloween throughout, with references to Haddonfield, and one scene extremely reminiscent of Michael Myers, with our seemingly down-for-the-count killer sitting up in the out-of-focus background while our heroine is collecting herself in the foreground. Just great stuff all around. I wish the other two stories were a bit more in-line with this one so the whole thing could have been a classic all around. 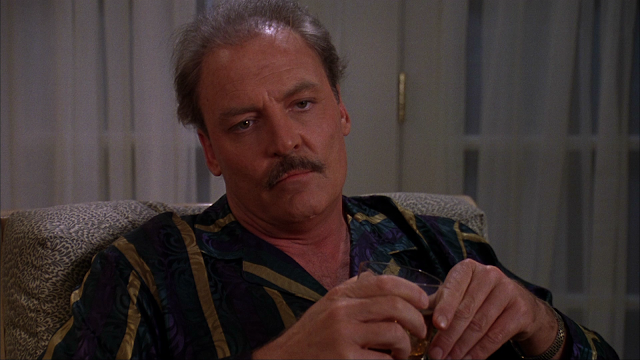 The next story is my least favorite of the bunch. It feels completely out of place and asinine compared to the other two stories. It throws the whole thing off balance and completely derails the movie until we see Carpenter reappear as the Coroner later on. Honestly, Stacy Keach puts in a pretty solid performance as a guy worried about losing his hair. I actually really like Stacy Keach, and he's pretty great in his character... It's just that this character and this particular story should never have made it into this film. 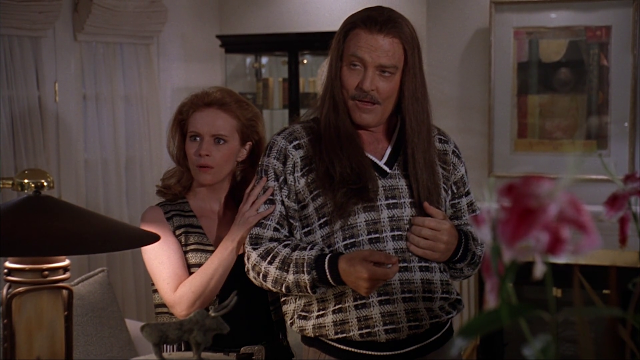 He plays a guy going bald, and most of the story is all just build up, with him getting more and more desperate and more and more despondent with every moment. First off, they spent WAAAAY too much time getting us to where we needed to go. This segment seems to drag on FOREVER because the biggest portion of it deals with the various ridiculous lengths the character is willing to go to to try and either cover up his baldness, reverse his baldness, or argue about his baldness with his girlfriend, Sheena Easton. (Yes. THAT Sheena Easton.) The whole thing plays out more like a sitcom than a horror film. It's ridiculous. So what does this guy do? He goes in for a procedure at a clinic that can magically give him a full head of long, luscious Fabio-esque hair. Nothing suspicious about that right? 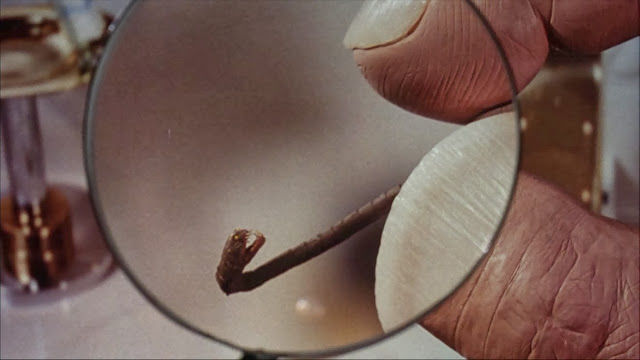 Sigh. Wrong. The hair is aliens. Brain eating aliens. And they take over the guys body, and he looks like this: 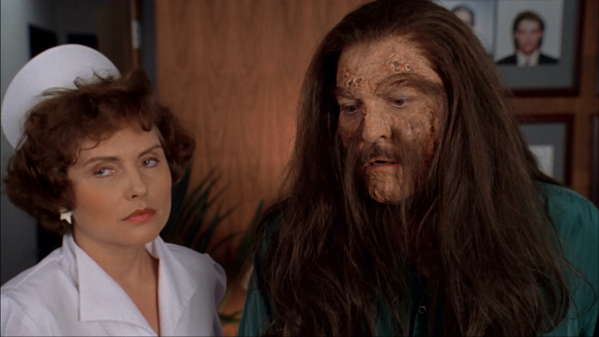 So that Deborah Harry (one of my favorite horror anthology alums!) can harvest the alien hair worms from his head. Ugh. It's just all so stupid. What is even more confusing is that when we're in the morgue before the story begins, the Coroner's introduction for this particular vignette doesn't seem to have ANYTHING to do with it. It really makes me wonder if this was the original intended segment for this part of the film. Everything about this story annoys me. From the set design to the horrible practical effects (see the giant play doh finger above) to the just really dumb idea. I mean, this plays out more like an episode of "Monsters" than a quality piece of filmmaking (even if it was made for TV). 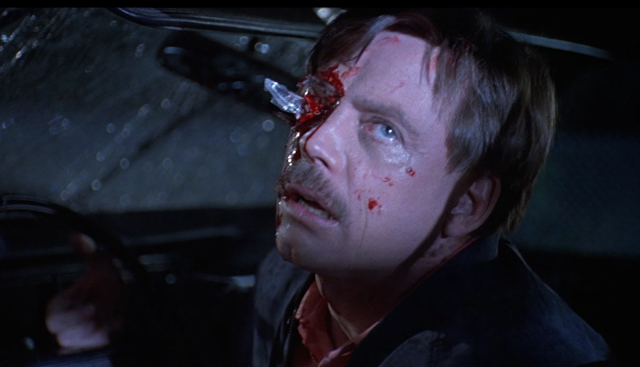 The final story sees Luke Skywalker get an eye poked out in what begins as a PSA for not driving distractedly. Honestly, I think I would have liked this one a LOT better if there was a different story between "The Gas Station" and "Hair" segments. If they had kept to a serial killer theme, throughout, this one would have felt a lot less ridiculous. But coming back from Stacy Keach's ridiculous hair implants just to jump right into Mark Hammill's eye implant just makes them seem too similar. What was needed here was a more cohesive middle story. "Eye" isn't a bad short honestly, it just ends up feeling a bit tacked on. 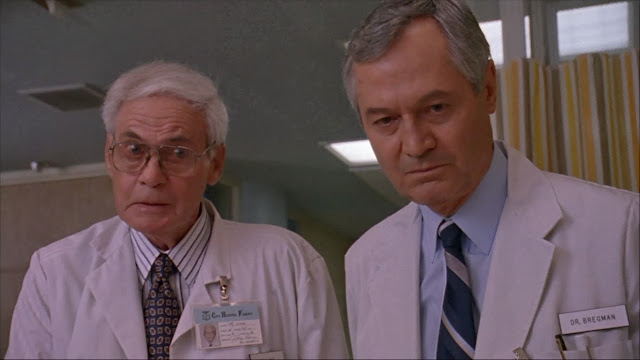 Veteran Horror/sci-fi guys John Agar and Roger Corman show off their bedside manner before giving Hamill's Character, "Brent" the news that a new experimental eye transplant may give him his vision back. Taking a cue from the 1991 horror film "Body Parts" Brent's new eye used to belong to a necrophiliac serial killer! Wackiness ensues. 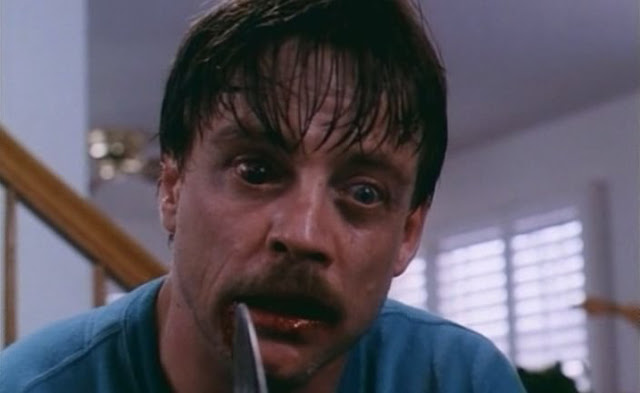 This story ends up pretty much the way you know it has to. There are some good, trippy sequences where the eye makes Brent hallucinate, and even makes him start to act on the impulses of its previous owner before he pops that sucker like a zit with some garden shears. Pretty much the whole message here is: Keep your eyes on the road while driving at night or else the spirit of a necrophiliac will inhabit your eye socket and make you try to kill your wife. 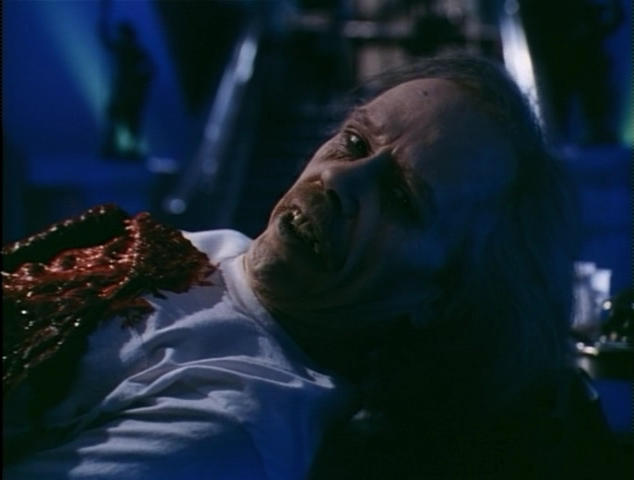 We then make one last jaunt to see Carpenter's Coroner character hop into a body bag of his own, revealing that he was a cadaver the whole time! Not a real shock mind you, but a fun little twist that makes the guy that much more endearing. Again, Had they dropped "Hair" from the line-up, and put something more similar to the "What's Cooking?" or "Undertaking Parlor" episodes of Tales From the Crypt in the mix. As it was, for all the macabre delight Carpenter seems to take in playing the Coroner in the framing story, we see very little of that bleed through to the stories, which is a shame.

That's it for tonight kids! I'll be back very soon with some Gutwrenching Goodwill Goodies! So until then, Happy Haunting!
Posted by Derek Ash at 8:24 AM