Countdown to Halloween Day 28: Goodwill Finds, Brewer Store PLUS a Potpourri of Other Finds

Welcome back! I know it's going to be hard to top the incoherent ramblings about a random pile of comic books that was my last post... but I will try. This is the penultimate "Goodwill Finds" post of the season. I have one more planned for the day after tomorrow, but I gotta admit, I'm already getting misty at the idea of not reporting on all the Halloween-y goodness I've been finding this season. What makes it all even more bittersweet is that these items were all picked up the weekend before Halloween, and everything was already half off! Now, I'm not complaining about saving more money, believe me. But when they're trying to liquidate their stock a week ahead of the holiday itself... Man. 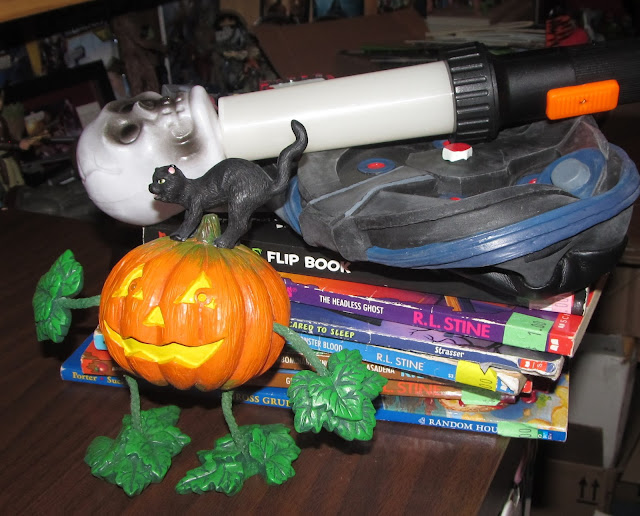 Alright, enough jibber-jabber. Here's the pile-shot. Before we dig into it, I want to let you know as well that at the bottom of this post, I've added a few other miscellaneous items that I picked up here or there that I wanted to share before the end of the season, but didn't really have a good place to do it before. So BONUS material! Yay! This is a pile of stuff I picked up in the Brewer, ME store.

First up is this light-up skull wand. It reminds me SO MUCH of the lightsabers they make for roleplaying and the skull on the end is so cheap and classic looking that I HAD TO OWN THIS. 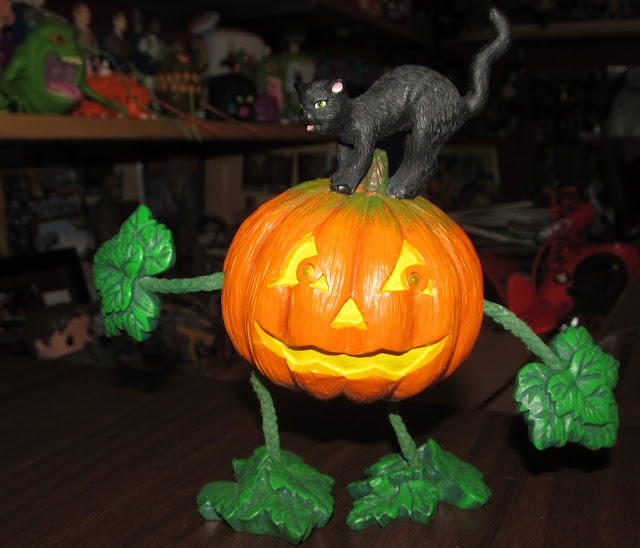 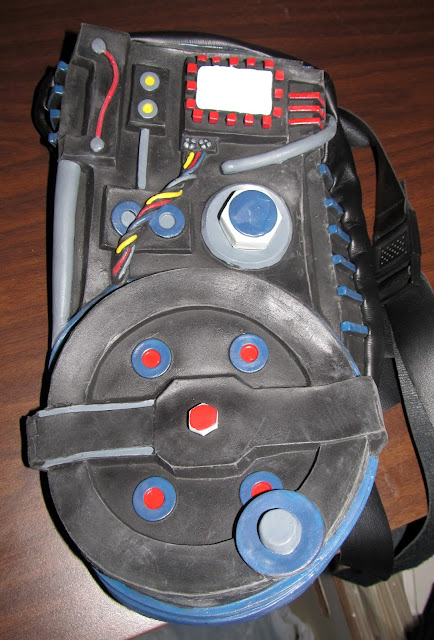 The picture of this rubber proton pack makes it look much bigger than it actually is. Think like.. a baby Ghostbuster... or a dog... I'm not even sure what this originally went to. The pack is on weird, like fake leather straps... and even weirder, the thing opens up on the side that would go on your back, like you can put stuff inside it. Maybe it originally had a foam insert? Or... you can use this thing as a purse maybe? I don't know. I just know it's a freaking proton pack and I wasn't going to leave the store without it. 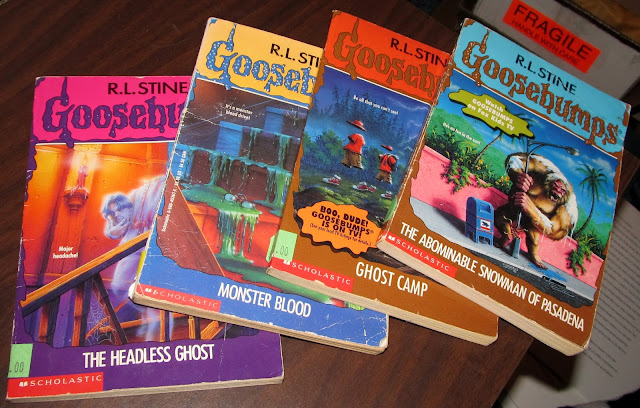 I've maybe mentioned that my son is going Goosebumps crazy all of a sudden? So I of course brought home four of these books. I'm keeping my eyes peeled for "The Blob that Ate Everyone" specifically for myself. I'm starting a Blob collection. I don't have to justify myself to you.

Even though that's pretty much what every single line of this blog actually is. Just one big justification of... well pretty much everything I do. Let's not examine all this too closely. Let's move on. 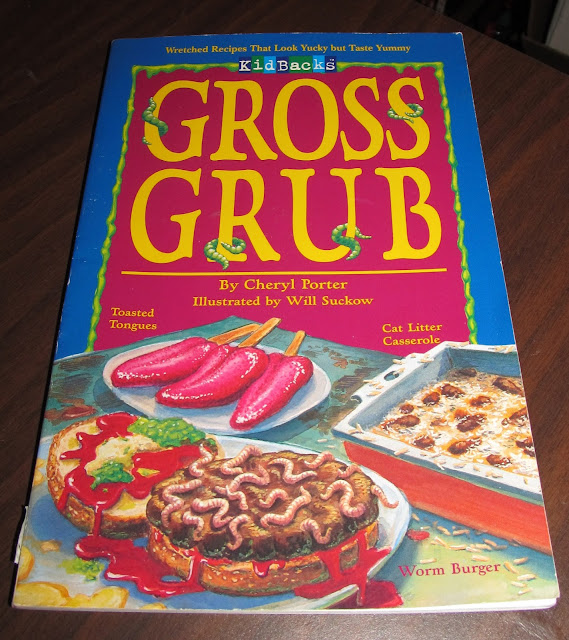 I picked up a fun looking cookbook called "Gross Grub" that has all kinds of disgusting looking food inside. There are all kinds of fun recipes inside... although I don't think I'm ever going to be able to make convincing-looking tongues out of meringue like they do in the book. I might take a stab at it someday though. If I do I'll post pics here. 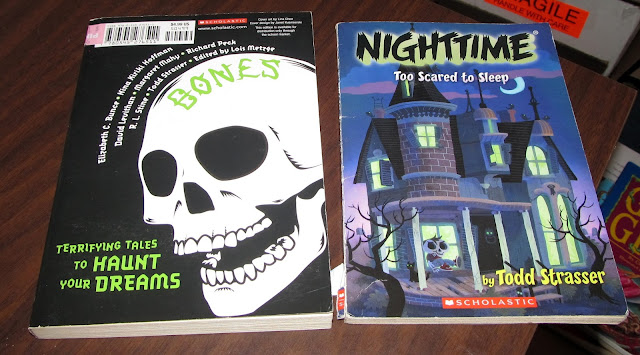 Finally, I found a couple of anthology horror story books. I think one of these may be a last minute squeeze-read in the ol' Halloween Read Pile. I need a book I can finish in just a couple of days so I can be reading my final book by Halloween. So one of these might work. "Bones: Terrifying Tales to Haunt Your Dreams" is actually one of those two-sided, flip-over books where there's a whole other book on the other side. In this case it's the book "Bites" that I read as a part of my Halloween Read Pile last year. I didn't like that one very much, but that's the magic of anthologies. You never know what you're going to get. Or maybe that's a box of chocolates. "Nighttime: Too Scared to Sleep" is an collection of stories by Todd Strasser... whom I've never heard of. This one may actually be the winner though. Because it's only about 90 pages long and I am really intent on hitting 31 books before Halloween gets here. So... yeah. Quantity over quality and all that.

All right! That does it for my trip to Brewer. But that wasn't all I wanted to share tonight! As I mentioned above, there were a few odds and ends this season that I wanted to wait and see if there was a post (like this one...) that needed some... beefing up. So, even though these items are all from assorted other trips to Goodwill, I thought I'd collect them together here just to show them off. 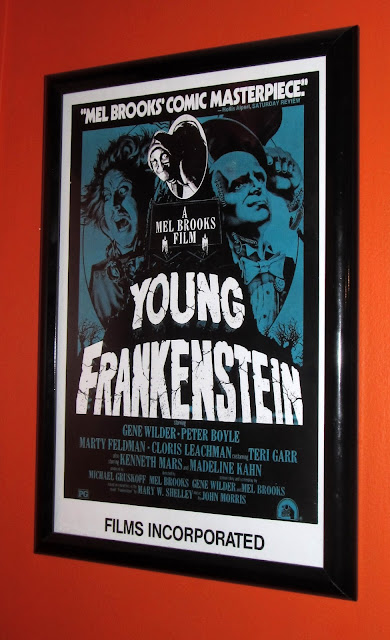 I found this AWESOME framed poster of Mel Brooks's "Young Frankenstein" at the Ellsworth store awhile back. they actually had a whole bunch of other Gene Wilder posters there as well, but this was the only one that interested me. Had they had "Haunted Honeymoon" I would have been all over that too... but it was not meant to be. This is actually hanging u in my living room because I don't have this kind of wall real-estate in the cave anymore. 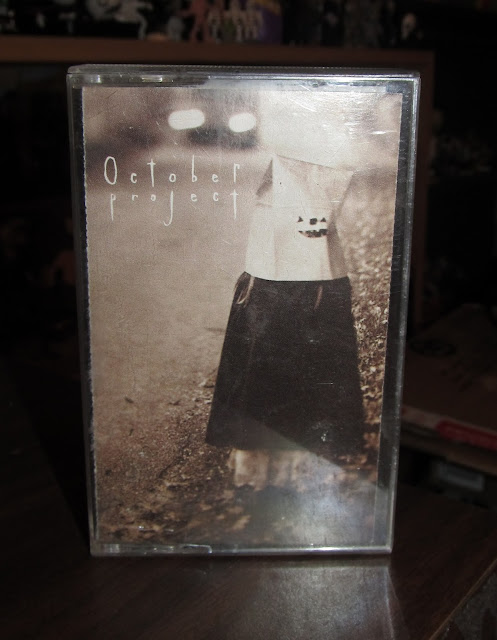 I made several rules about collecting cassette tapes that I promptly broke for various reasons. I swore I would not collect stupid looking cassettes ironically. Broke that rule. I swore I would not collect novelty tapes just for the sake of owning them. Broken as well. I also swore I would not buy cassettes based on cool cover art without knowing anything about the artists. So this is an example of that rule being broken... and why I should have stuck to my guns. While "October Project" is a KICKASS name for a band, and a creepy kid in a paper bag jack o' lantern mask is KICKASS AS WELL... the music on this cassette is just so not kick ass it hurts:


So I don't even know how to describe this genre of music other than "bait-and-switch." 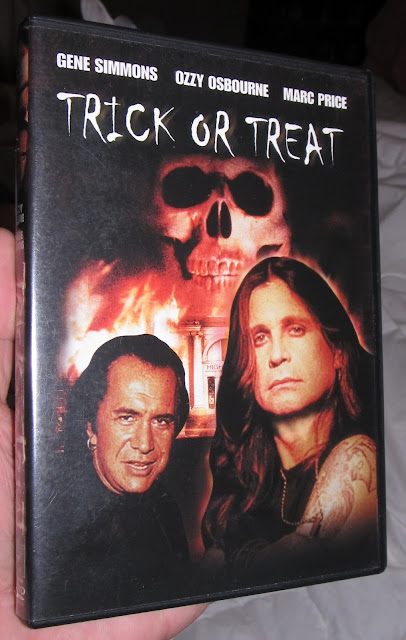 I also picked up this dvd of "Trick Or Treat" (not to be confused with "Trick R' Treat" which I discussed just a few posts ago) about the undead rocker Sammy Curr. Watching this movie has been on my to-do list ALL MONTH and I just haven't gotten to it. Not sure I will before Halloween gets here either. I wanted to watch it back to back with "The Midnight Hour," but the night I watched that I ended up watching "Late Phases" on Netflix instead. I regret nothing. Maybe I can still squeeze this bad boy in before the season is over... even if I can't, I may not be able to wait for next Halloween to check it out. November is notorious for late Halloween viewing around here (December and January can be too, depending on what movies I receive as Christmas gifts...) so it's not impossible. 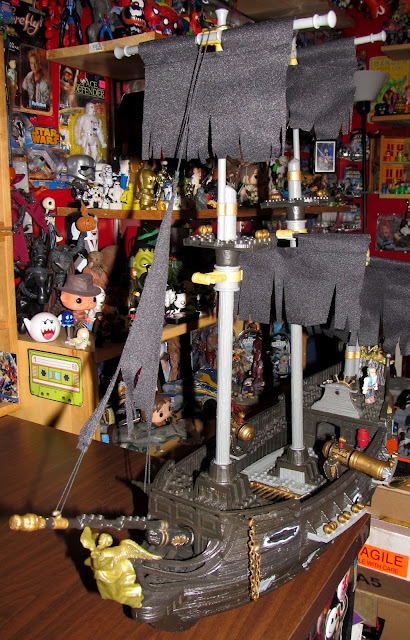 Finally, I just wanted to show off the Mega-Bloks Black Pearl that I got in a 3 dollar grab back in pieces. There are a couple of pieces missing... but I would estimate that this thing is like 80-95% complete. I JUST watched "Pirates of the Caribbean: The Curse of the Black Pearl" with my kids, as my older son was very curious about them. He desperately wants to see the other two now, and I'm more than happy to oblige, as soon as I can track down copies of them. I don't hate those movies by any means. 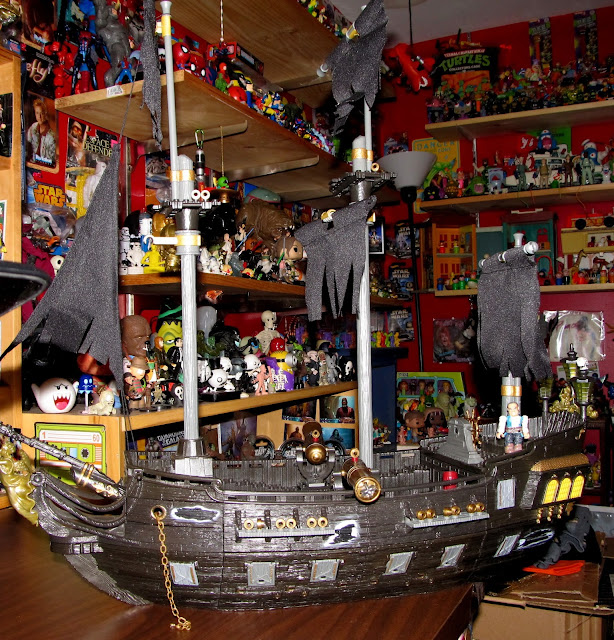 I've gone into great detail as to why skeletal pirates are such a MUST for Halloween in the past, so I won't your time or mine by reiterating here... but I think this thing is just amazing to look at. I'm totally going to load it up with skeleton pirates.

Alright, that's it for tonight kids! I'll be back soon with more Grievous Goodwill Goodies soon enough, but until then, Happy Haunting!
Posted by Derek Ash at 2:40 PM