Hello everyone! Tonight I'm back on anthologies, but this time it's all about comic books! I pretty much just dug out all of the anthology horror comic books I could find in my collection (there are more but I FRUSTRATINGLY couldn't find them all. It's driving me INSANE!!!) 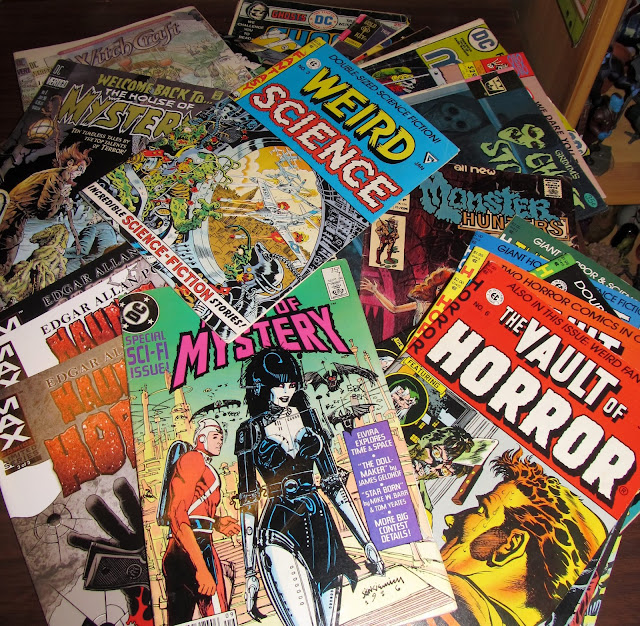 Here's a nice group shot of all the comics, scattered on my desk. I kind of just love the look and feel of this picture. But let's dig in, shall we? 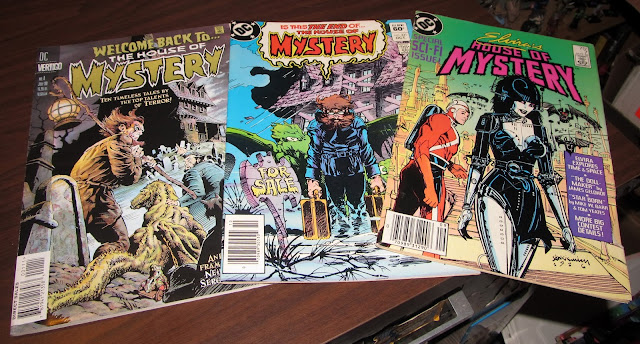 If you're looking for some sort of well-thought-out, archival history of anthology horror comics, you have come to the wrong blog. Pretty much I'm just going to be pointing at stuff and going: "Hey isn't this cool?" for this entire post. What I really want to focus on is the presence of a "host" or some sort of framing story that keeps the anthology format moving. So the comics that lack this aren't going to get much more than a quick cover shot before I move on. First up: House of Mystery!

This one is a favorite for various different reasons. 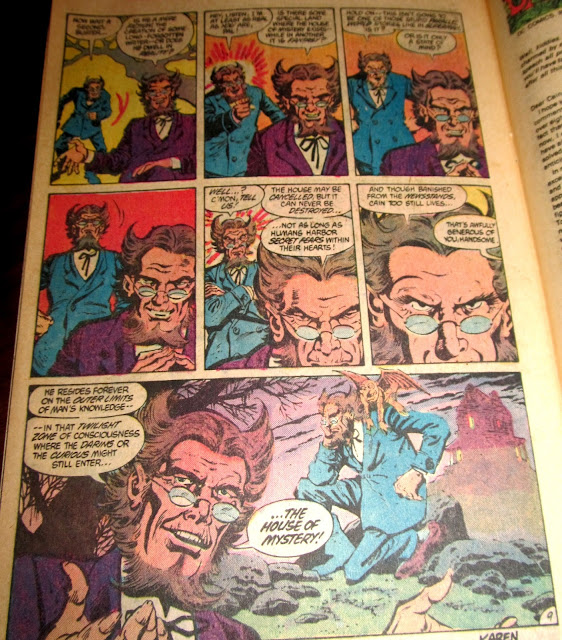 First up, is Cain. Yes, THAT Cain. As in Cain of Cain and Abel. If you are even passing familiar with DC's House of Mystery (and it's brother book, the House of Secrets) then you will know that Cain, the first murderer is the host of House of Mystery, where he delights in repeatedly murdering his brother Abel in various nasty ways. Cain lives in the House of Mystery, Abel in the House of Secrets. The Houses and the brothers are actually canonical DCU locations and characters, and have been used in stories alongside superheroes, and arguably most famously as a part of Neil Gaiman's run on "The Sandman" where the brothers play rather large roles in the stories. The only issue I own of the classic series is the issue where they announce the series is being cancelled, in October of 1983. Ho-Hum. 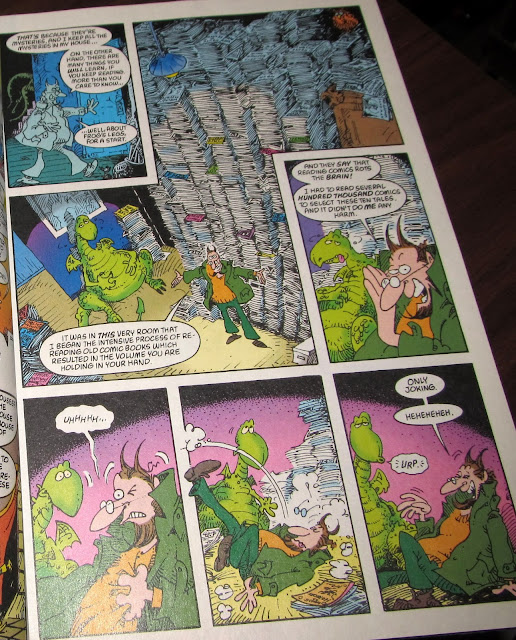 There was a reprint special put out in 1998 by the DC/Vertigo imprint with 10 different stories collected from the House of Mystery comic, as well as "PLOP!" another comic that featured Cain and Abel. The framing story was written by Neil Gaiman and illustrated by Sergio Aragones. The stories contained within are prime examples of House of Mystery storytelling, and what I've come to realize is that while the stories were often clever and even beautifully illustrated, they were always a bit rushed. 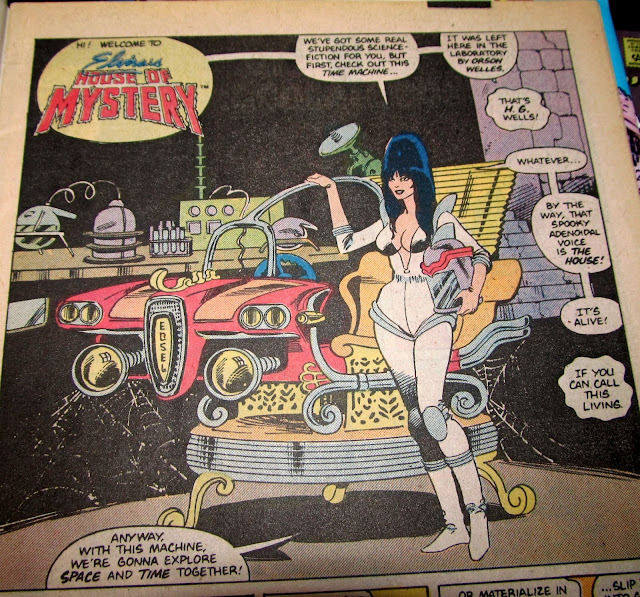 The House of Mystery was taken over by the Mistress of the Dark herself, Elvira in 1986. Apparently this was only an 11 issue run, and I was lucky enough to find the 7th issue in the series in a recent trip to the Big Chicken Barn. This is a "Special Sci-Fi Issue!" She and the House banter back and forth quite a bit in the framing sequences, and apparently it is her mission to track down the missing Cain. This all takes place during the Crisis on Infinite Earths event. 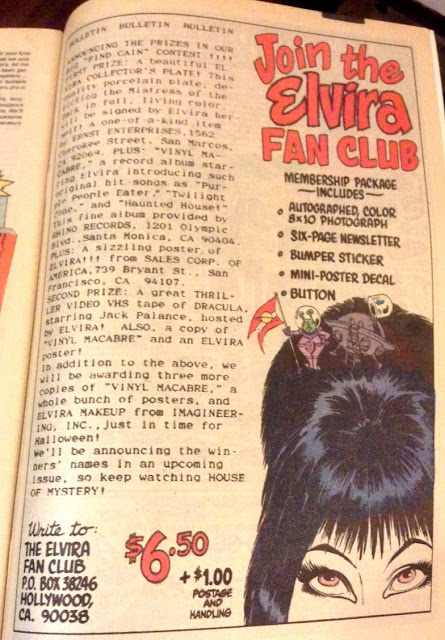 I think probably the most exciting thing about this comic book is the offer to join the Elvira fan club though. I mean... for just less than 8 buck I get an autographed 8x10, a newsletter, a bumper sticker, a mini-poster decal, AND a Button!? If I wasn't afraid of just wasting 8 bucks, I would totally send out for this tomorrow, just to see what happens. 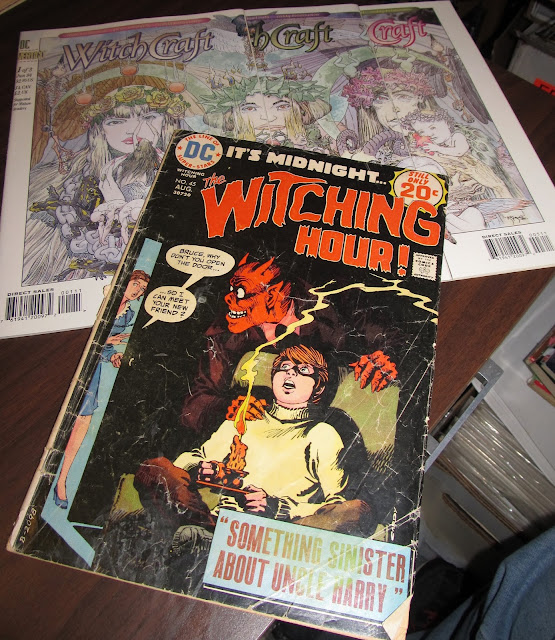 Another DC horror anthology comic is "The Witching Hour" which featured three witches. These witches were Mordred, Mildred, and Cynthia. 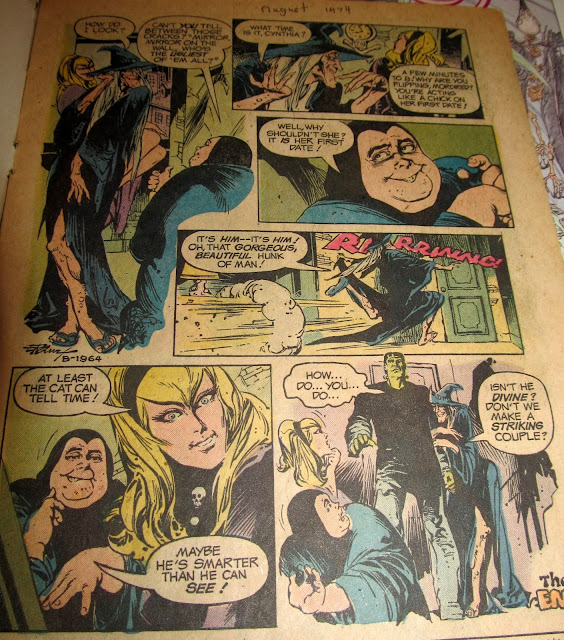 These witches would also come to be very important in Neil Gaiman's run on "The Sandman" as well as earning themselves a mini-series called "WitchCraft" in 1994 written by James Robinson, and illustrated by 4 different artists: 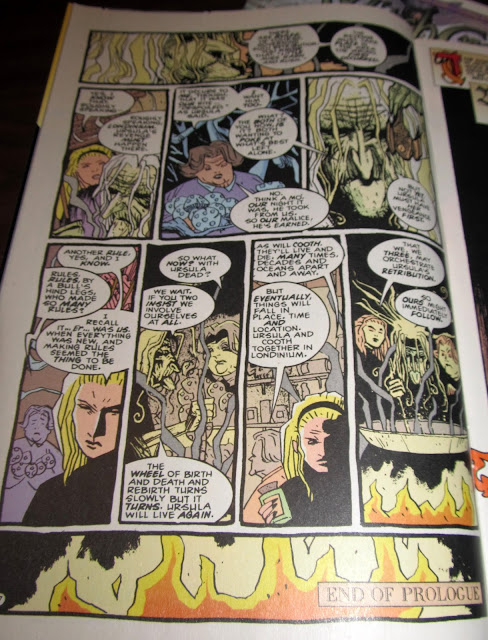 The "Witchcraft" miniseries both is and isn't a horror anthology in and of itself. It tells four distinct stories, but they are stories of reincarnation and revenge, and they all tie back directly to the framing sequence. I'm making the case here and now that this actually IS a form of anthology storytelling, albeit one a great deal more structured and intertwined than most. 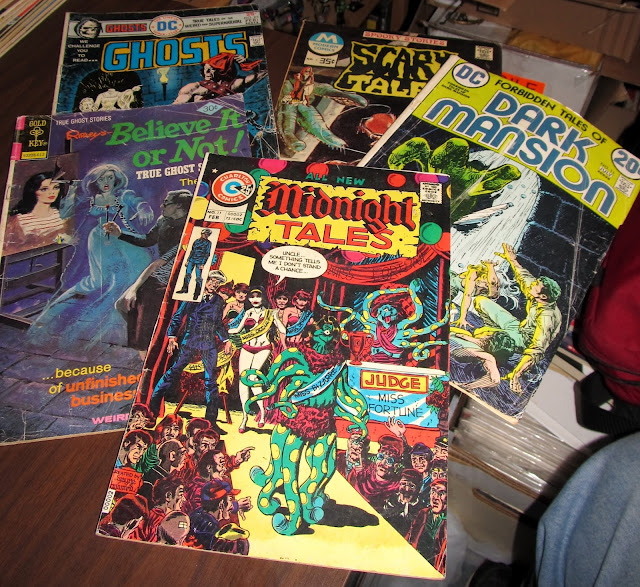 The next pile of comic books I want to focus on are the ones sent to me by my online friend, John Gaither of the Robot Monster Space Super Hero blog (say THAT 5 times fast!) who regularly floors me with his kindness and generosity! Of the 5 issues you see above, the "Ripley's Believe it Or Not: True Ghost Tales," and the DC comics, "Ghosts" did not have a framing story or "host" character, so I won't be delving in past the covers... But the remaining three had some fun characters to welcome us in. 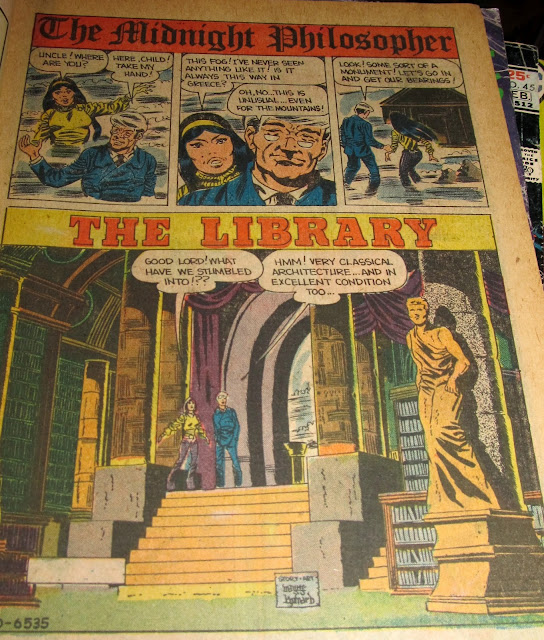 "All New Midnight Tales" from Charlton Comics  stars The Midnight Philosopher, Professor Cyrus Coffin and his niece Arachne, and apparently, the theme of this particular comic was that they would head into a mysterious locale or situation each issue, and then the stories included would reveal clues as to the nature of the mystery. An interesting idea. 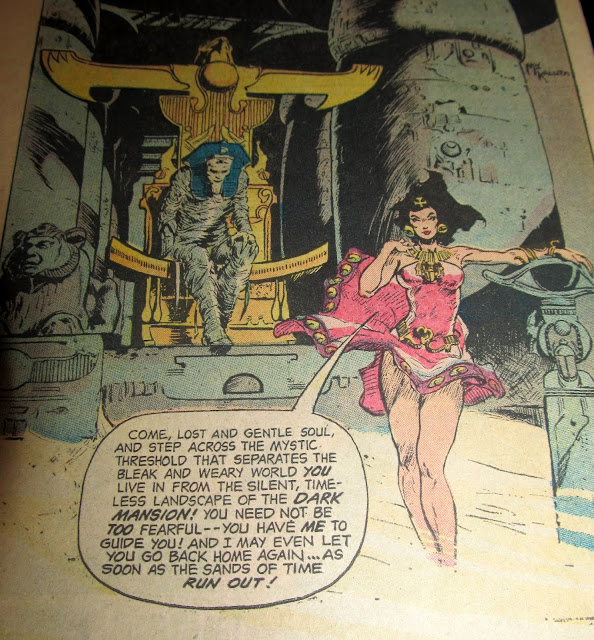 Next from DC comics we have "Forbidden Tales of Dark Mansion", and its host, Charity! This is a pretty cut and dry set up with Charity popping in to give us an introduction to each tale, and a closing anecdote after each one wraps up. Apparently Charity there went on to become a supporting character in the Starman series. 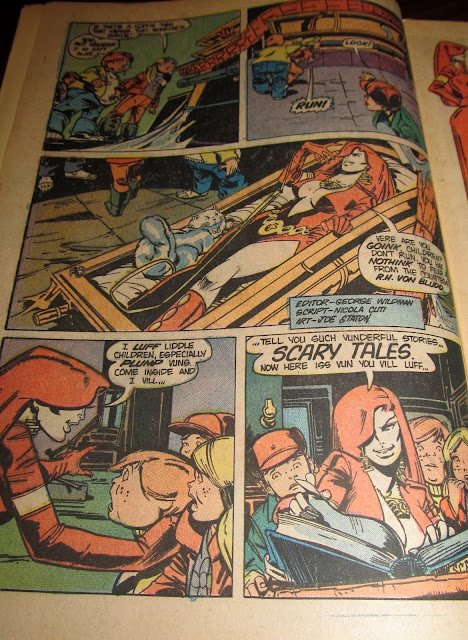 "Scary Tales" was originally a Charlton comic as well, but the copy John sent me here is a reprint put out just a couple of years later by "Modern Comics" which I find very interesting! Countess R.H. Von Bludd is our host, and as this is the very first issue, we are treated to a collection of vampire stories, and more than one of them feature her in them! 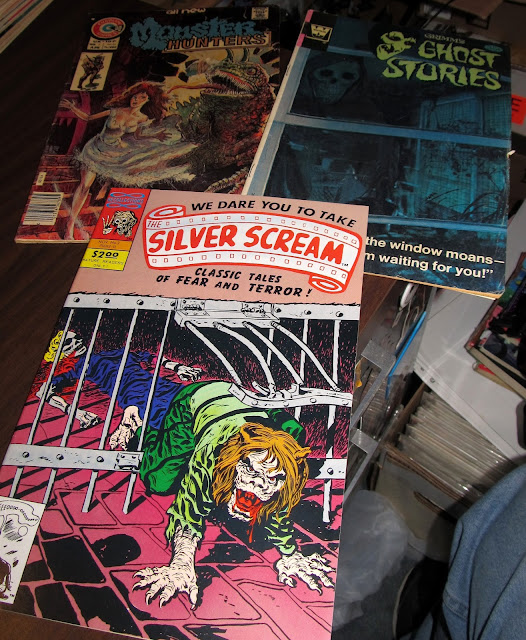 The Charlton comic "Monster Hunters" is a straight up anthology with no host from 1976, and "The Silver Scream" is a reprinted collection put out by "Recollections" (Lorne-Harvey Publications) back in 1991. We're not going to pull back the covers on either of them. Instead, let's take a closer look at... 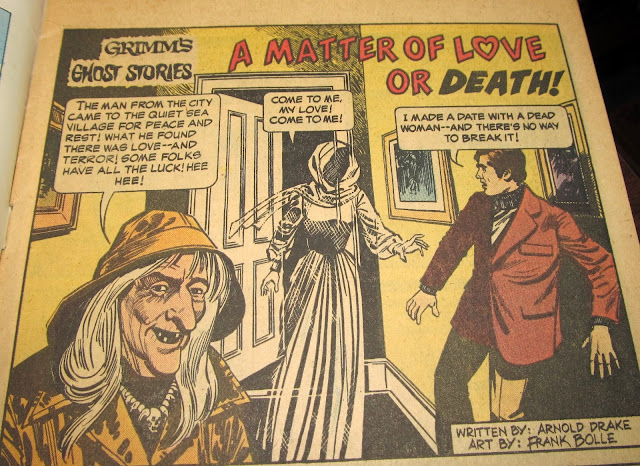 "Grimm's Ghost Stories" from Whitman Publishing, circa 1978. As far as I can tell, the host here is the titular "Grimm" who is a clotheshorse hag who changes her outfit for every story. She dresses as a fisherman for the first story, a bullfighter for another, etc. I love the guy's quote above: "I made a date with a dead woman-- and there's no way to break it!" 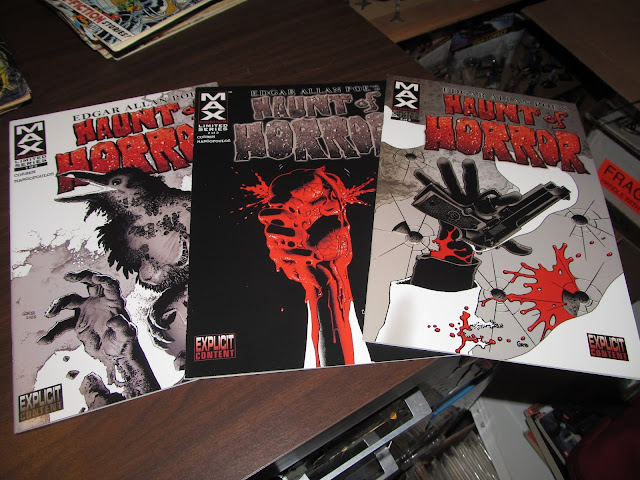 Edgar Allan Poe's Haunt of Horror is a much more recent affair, although it's still almost a decade old, having been published back in 2006. It is a part of the Marvel MAX imprint, which was for mature readers only. The stories are all loosely based around the stories of Edgar Allen Poe, and while some of the tales are literally interpreted, some of them are veeery subjective. There is no framing device, per se, but we do get this guy in the front cover of each issue: 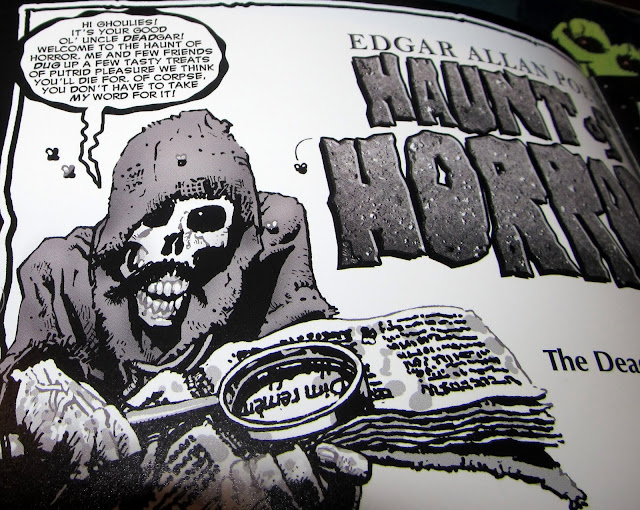 Uncle Deadgar! And each issue is presented by the "Dead Poe Society" which gave me a chuckle. 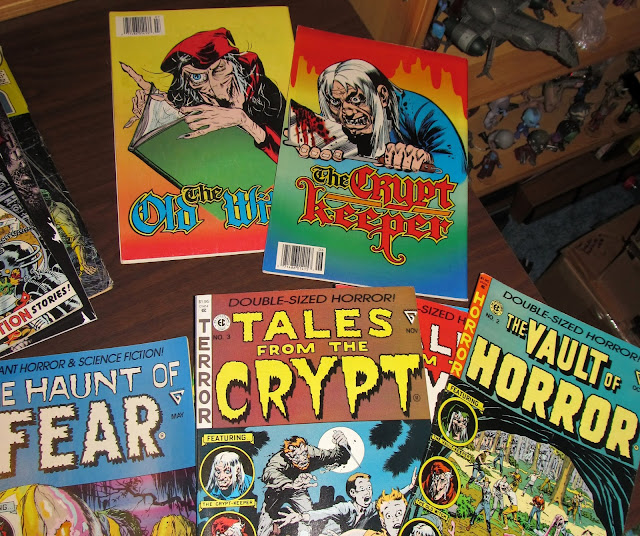 And finally, I would be remiss if I didn't mention some of the MOST famous anthology horror comics of all times: The Haunt of Fear, The Vault of Horror, and of course: Tales From the Crypt! The issues I own are all reprints that were put out in the early 90's. Each issue is technically a reprint of two comics, the first being the title comic, and the second one being "Weird Science Fantasy" or "Crime SuspenStories" or some other random EC comic from back in the day. Of course, you talk about classic EC horror comics without taking a look at their three horror hosts: 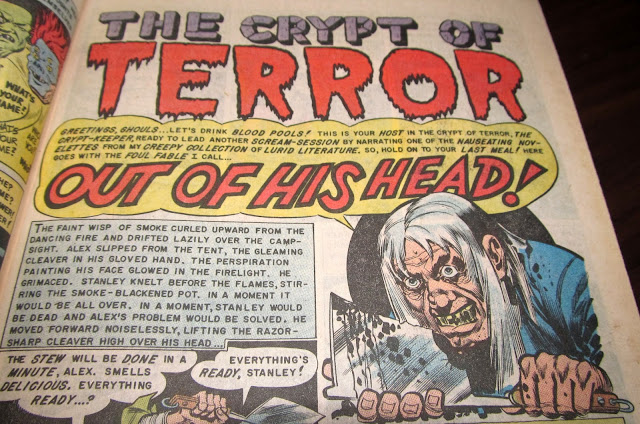 The Cryptkeeper! This guys quite a bit different than the Cryptkeeper we know and love from the HBO anthology show! 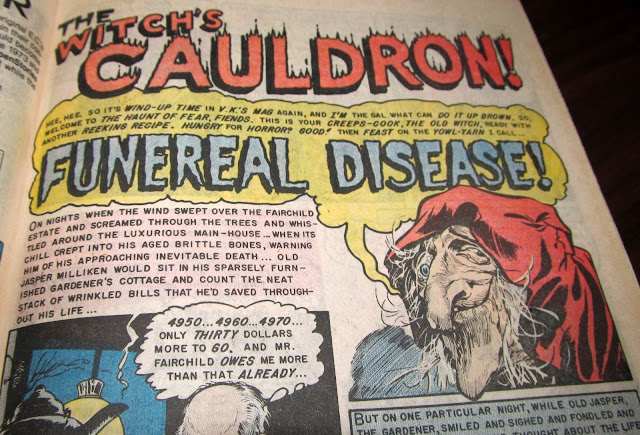 The old witch is the primary host of "The Haunt of Fear," though all three hosts actually show up in all three of EC's horror comics. 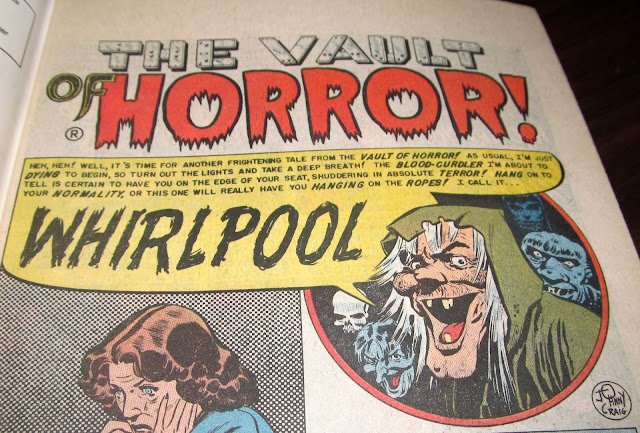 And I'm not even sure why they needed a Vault Keeper. He seems a bit redundant, honestly. Basically the Cryptkeeper in a hoodie. Like I said, if you were expecting to be educated or otherwise enlightened in any way by this post, I feel you must understand by now that this is simply not going to happen.

And that's all I have for tonight folks! Just a weird and wacky melange of comics that all happen to be horror anthologies! I'll be back soon enough with some Graverobbing Goodwill Goodies! Until then, Happy Haunting!
Posted by Derek Ash at 7:45 PM