Welcome back my fine feathered friends! Today I'm back on about Anthologies! This time we're taking a look at a particularly memorable episode of the series, "Tales from the Darkside!" We've already looked at the film, so now let's look at an episode from the show that inspired it! 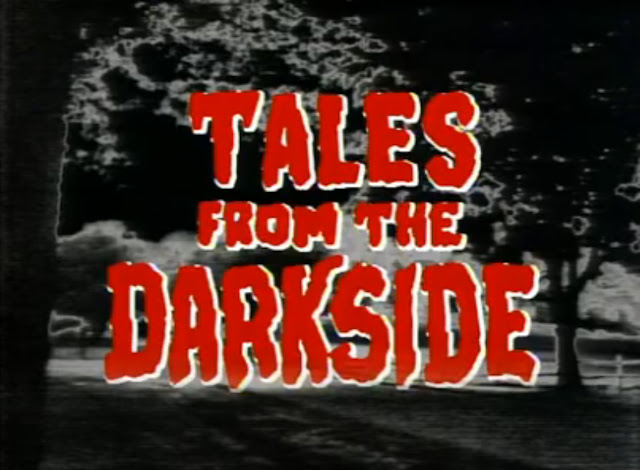 Tales from the Darkside had an incredible theme song. The opener itself was pretty weak, just showing some black and white scenery that flips over into a negative image before the title logo pops up... but man that THEME SONG!!! It had this weird, whiny sound to it that strikes the brain somewhere between the areas where a Theremin and a saw you can play with a violin bow would normally land. 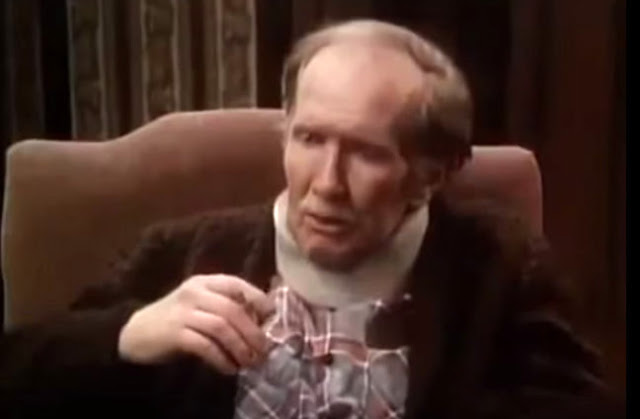 The episode I'm featuring here is, appropriately enough, a Halloween one! Called "Halloween Candy" this story may sound familiar to you, so stop me if you've heard this one before: There's a crotchety old man who would rather freak out trick-or-treaters than hand out candy. He gets his comeuppance in the form of a murderous, pint-sized supernatural trick-or-treater. Sound at all like one of the stories in (still coming up in this very countdown!) Trick 'R Treat? You wouldn't be the only one to think so. But I'm not going to harp on the similarities, since this episode of Tales came first, but Trick R' Treat did it waaay better. That's not to say I didn't have room in my heart for both. 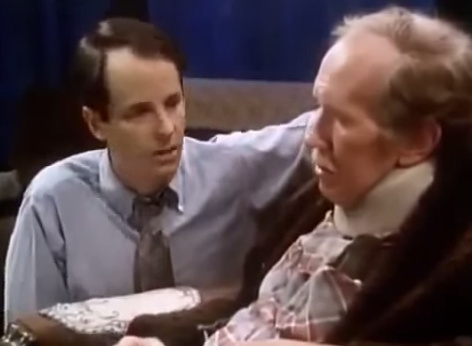 Cantankerous old Mr. Killup hates kids, hates Halloween, and hates trick-or-treaters begging for candy. His son Michael has a strained relationship with him, to put it lightly, but cares for his dad out of obligation. The episode opens with Michael trying to convince his dad to hand out the candy he has supplied him, to save the trouble of undoing all of the Halloween pranks that are sure to follow. 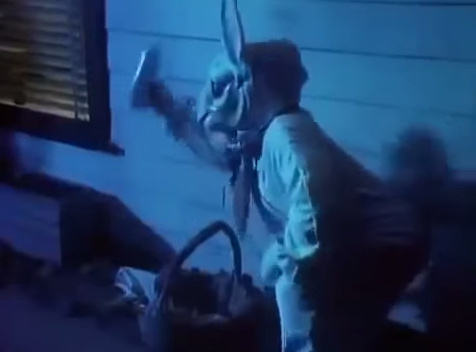 Well grumpy old men will be grumpy old men, and shortly after Michael leaves, the hungry hoards of candy-begging juvenile delinquents descends on the Killup house. This kid in the bunny costume is arguably the creepiest looking thing in the whole episode, and shows up with an Easter basket loaded with spray paint for the folks not handing out treats. 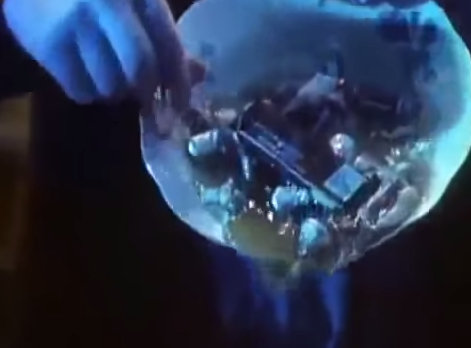 MR. Killup puts a stop to those shenanigans IMMEDIATELY. Finally, when a kid dressed as a devil shows up and finally pushes Mr. Killup over the edge, the old man gets in a Halloween trick of his own when he mixes glue, mayonnaise, honey, and assorted other foul goop together to make "Goblin candy!" which he gleefully scrapes into the disgusted kid's bag of treats.

This does not go unpunished. 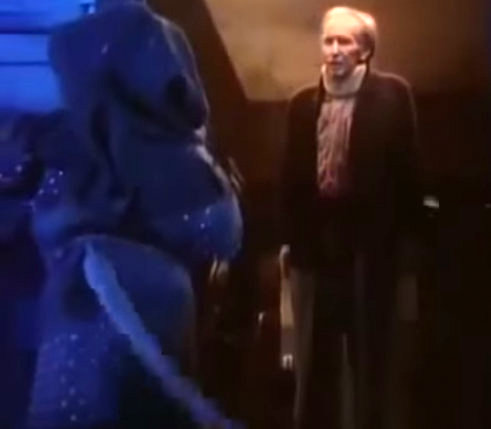 Later that night, much later than the average trick-or-treater would remain out... there comes a knock at the door after Mr. Killup has fallen asleep in front of the TV. Outside stands a ridiculously persistent, booming-voiced trick-or-treater who will not take a no when it comes to getting a treat. Mr. Killup denies this request and tries to ignore the "kid" but to no avail. It becomes very apparent very quickly that this is no run-of-the-mill Halloween prankster, and that Mr. Killup is in for more than a ding-dong-ditch or a tree-TP-ing. 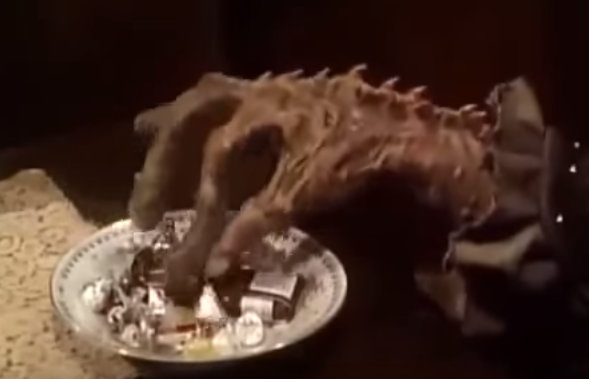 The Halloween creature pushes its way inside after menacing Killup from the porch for awhile. He almost gets ahold of a treat but Mr. Killup manages to fight him off. Things settle down for a bit, but Mr. Killup can't help but feel like this Halloween night is taking an extra long time to get over with. He's getting really hungry as well, and since Michael won't be bringing more groceries until the next day, Mr. Killup finds himself with very little to eat. 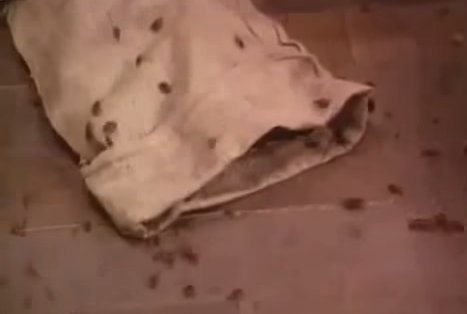 I should note at this point that Tom Savini is the director of this particular episode. I mention this because there are some close connections between this episode and ANOTHER anthology horror film I have yet to discuss here on the blog: Creepshow! There are several scenes, (including one involving the goblin's trick-or-treat sack, left discarded in the entryway) with maybe-real-maybe-not invading bugs, much like the Creepshow segment "They're Creeping Up on You" which Savini was a big part of. 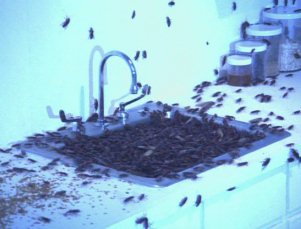 The image above is from Creepshow, and there's even a kitchen scene to match in Halloween Candy: 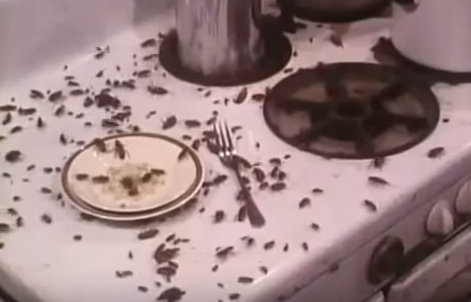 Things begin to escalate from there... As Mr. Killup realizes "That's not a mask..." and then begins to suspect that something is wrong with time. Time in his house seems to have frozen, making Halloween night last forever, and Mr. Killup is just getting hungrier by the second. 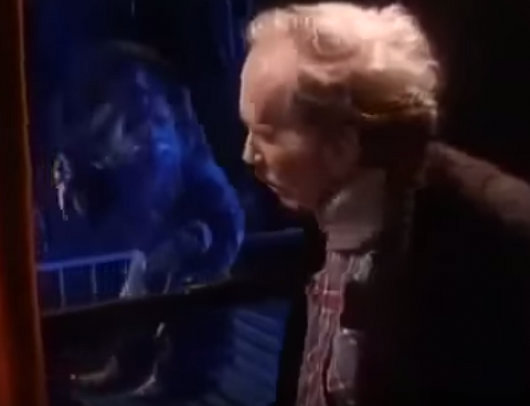 There is a final confrontation with the Halloween Goblin, as Mr. Killup looks out to see it sitting on the porch swing, and then finds it crouching directly in front of him inside the house! 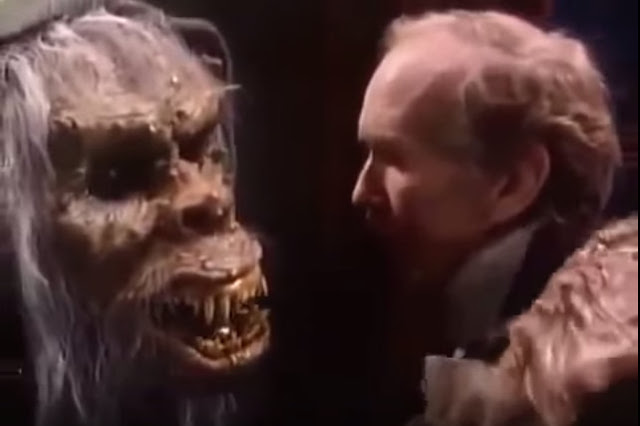 Mr. Killup does not survive this encounter, though mostly out of sheer terror and clumsiness rather than any violence on the part of the goblin. I want to take a moment here and talk about how great I truly feel this episode is. It obviously influenced Michael Dougherty more than a little when he was putting together the Sam vs. Mr. Kreeg segment for Tr'T... and you can totally see why. This episode while a little cheap and goofy feeling at times, is for the most part very good. It sets a good atmospheric tone, and builds to the climax of the episode very well. It has a very cinematic feel to it, and with a little tweaking it would actually have felt very much at home in a film like Creepshow. 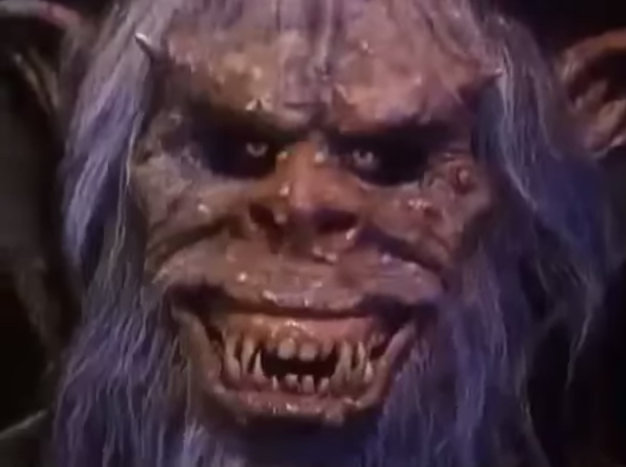 The Goblin, by the way, bears more than a passing resemblance to another Creepshow beastie: 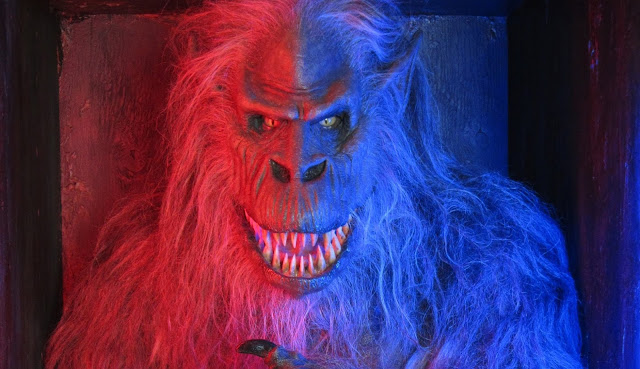 Fluffy, from The Crate! While not identical or anything, there is pretty obviously a "Savini Style" at work here. 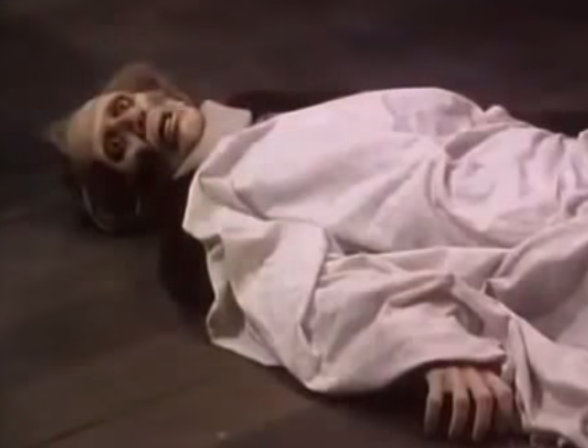 The outcome of the episode is rather bleak, and not just because mean old Mr. Killup got his just desserts... but because due to the time loop he was trapped in, he also wasted away to the shriveled up corpse you see above, placing his son Michael under investigation for Senior neglect! Yes, the medical examiner tells Michael to get a lawyer because he's obviously not been feeding the old man properly! MAN! IRONY! UNDESERVED PUNISHMENT!

Well that's it for tonight kids! I'll be back soon with some Gasping Goodwill Goodies! Until then, Happy Haunting!

Remember, I'm doing this countdown as a part of the official Countdown to Halloween, so be sure to pop over there and look and see who else is participating this year.
Posted by Derek Ash at 2:14 PM