Welcome back ladies and gents! Today I'm featuring another load of seasonal goodies I brought home from Goodwill! Let's not waste time jawing about it, let's dive right in! 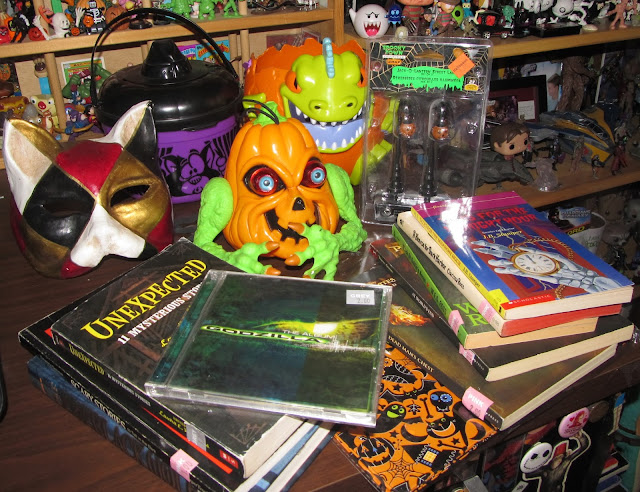 Here is the usual picture featuring the whole lot of goodies. Let us explore posthaste! 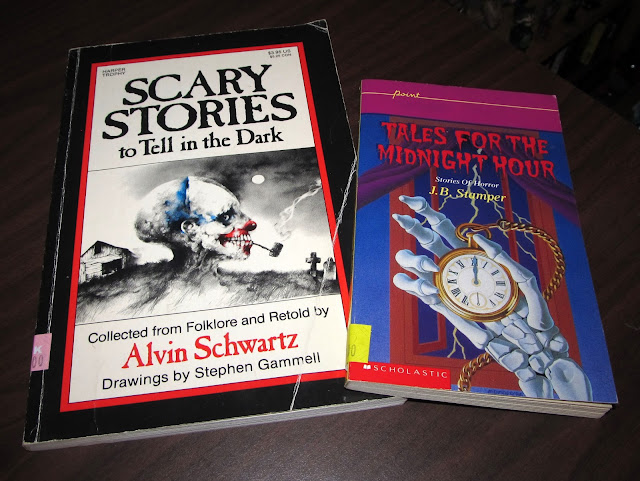 A couple more horror anthologies, one I'll be featuring in this very countdown, the other I will be saving for next year's Halloween Read Pile. I'm not going to waste too much time talking about either books because I'll be beating them to death in the future. I will say though that this was the last of the Scary Stories books I still needed to find in order to complete the trio, so that had me pretty excited! 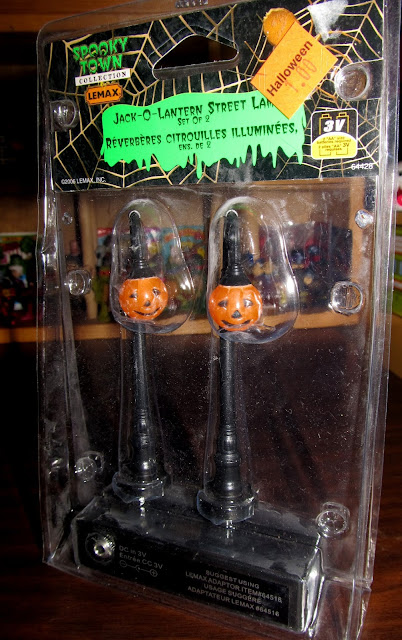 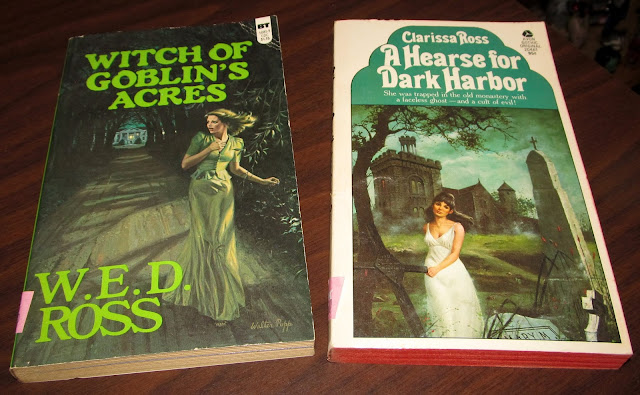 I think it's hilarious that there is a blog dedicated to books with covers featuring Women Running From Houses (which sadly appears to have been inactive since 2013... but still you guys) but even that has never really been enough to compel me to buy any of these MANY MANY books that I usually see at Goodwill. Until now. I'm still not 100% sure what possessed me to buy these ones, but... 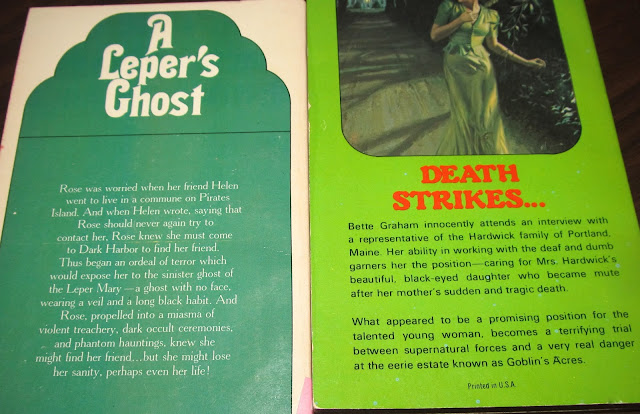 I think the ridiculous title, "Witch of Goblin's Acre" had something to do with it... and the fact that the book  just so happens to take place in MAINE (!) sealed the deal. And let's just say if anyone ever says the words "Faceless Leper Ghost" to me, it doesn't matter what's going on... I'M IN. This is powerful information people. Use it responsibly. 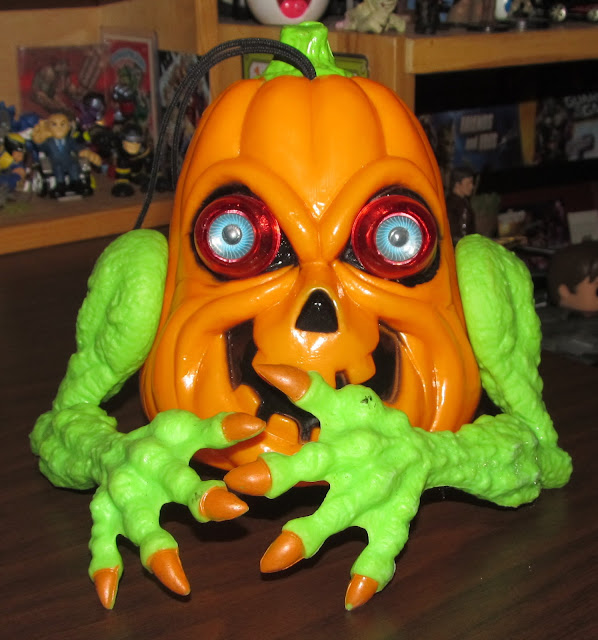 I freaked out when I saw the hands on this thing, because at first I thought I had discovered a stray Boglin at Goodwill. It's not crazy to think I could honestly. I've found a near-complete Castle Grayskull, and now not one but two Madballs at Goodwill, along with countless other awesome 80's toys. But alsas-alack it was not meant to be. This was not in fact a Boglin, and my disappointment at this realization almost made me put this guy back... but I calmed down, recollected myself, and reevaluated the situation before deciding anything too rash. At this point you must realize I brought the guy home. He's pretty great. I don't remember when I remember seeing these things come out, but I believe it was a while back. Not like decades perhaps, but long enough to appreciate more what I probably thought was damn annoying back when it originated. Pretty sure this guy jiggles and laughs maniacally while playing ear-piercingly intolerable theremin music.  But I haven't put batteries in him yet to test and see, so I can't tell you. 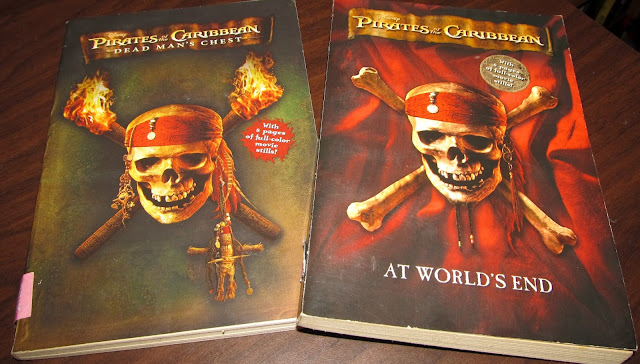 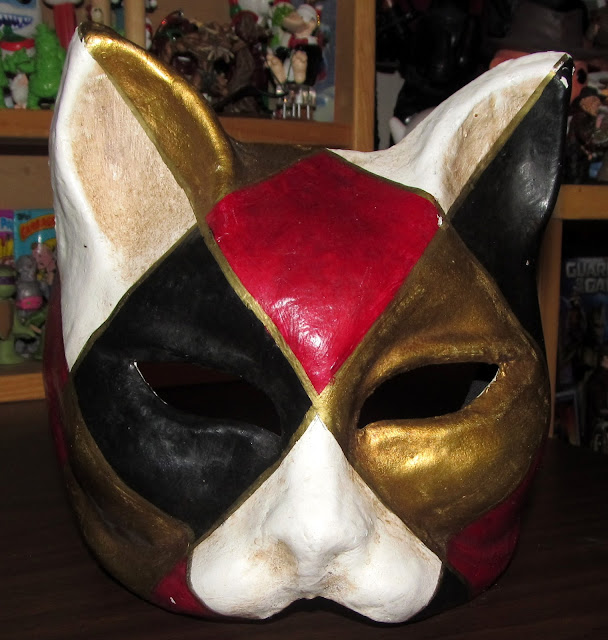 This mask wanted to come home with me so... I let it. Not much else to say there. I like harlequin and comedia del' arte themed masks and when I find ones in nice condition I usually pick them up. 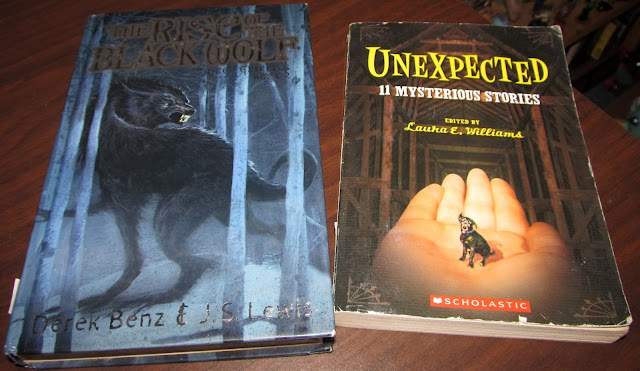 Derek Benz and J.S. Lewis wrote a trilogy of books called the Grey Griffins books, and "Rise of the Black Wolf," is the second in the series. I've read the first one, really enjoyed it, and now have the entire trilogy to dig into (I already have book 3). "Unexpected: 11 Mysterious Stories" edited by Laura E. Williams loos like a good contender for next year's Halloween Read Pile as well! 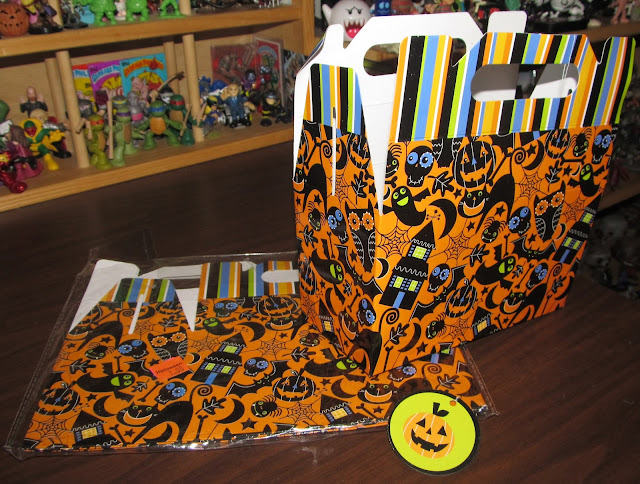 These treat boxes smelled like mildew as soon as I took them out of the plastic. Ugh. My wife tends to make a lot of baked goodies for friends between October and December, so I thought these would be a good fit... Too bad really. I may try to salvage them somehow. They aren't food-ready but that doesn't mean I can't clip the artwork and use it for something else. 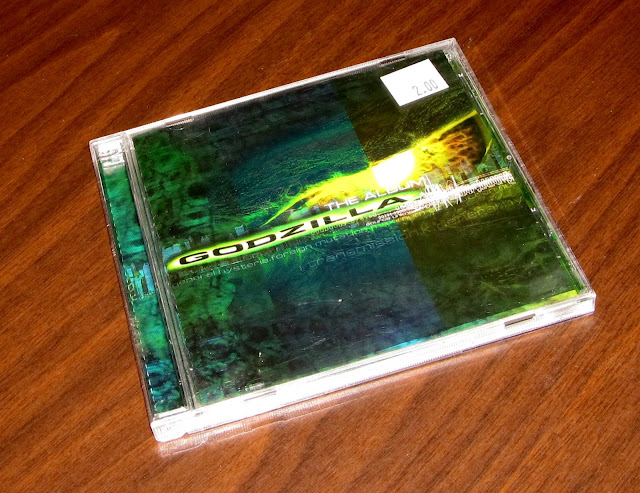 I brought home the soundtrack from the 1998 Godzilla film as well. My friend Brian of Pop Pop! It's Trash Culture fame recently recommended a track from this album (Greenday's "Brain Stew" specifically) to me while we were doing the Eclectic Mayhem Podcast together, so when I spotted it for sale at Goodwill, I snapped it up! 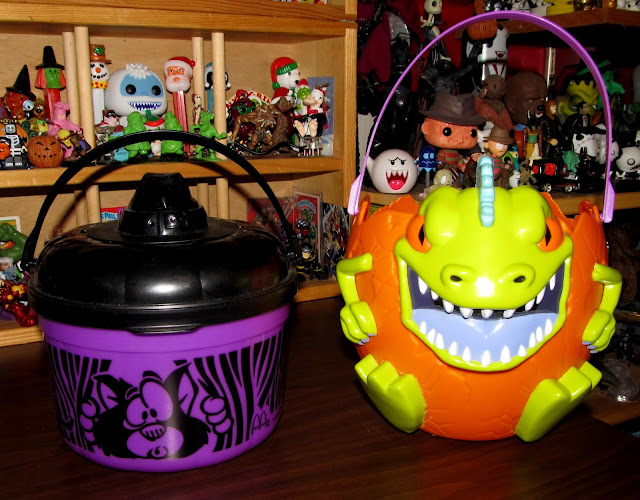 And finally, the two items I think I was most jazzed to find. The one on the left there is a McDonald's Halloween Pail from 1986 (UPDATE: While the bucket is stamped "1986" this bucket is actually from the 1993 series. Thanks to reader "Retro Robot Review" for the correction!). It's actually the witch bucket, but I like the cat peeking out from her hair so much more that that's the side I photographed. The bucket on the right I THINK is a trick-or-treat pail but honestly, the fact that it's an egg could indicate that it was an Easter bucket of some sort... but obviously someone at Goodwill agreed with me, because this orange monstrosity was in the Halloween section. These make LOVELY additions to my Halloween pail collection!

Well, that is it for tonight my friends! I'll be back soon enough with more Gorgon-Gazing Goodwill Goodies! Until then, Happy Haunting!

Remember, I'm doing this countdown as a part of the official Countdown to Halloween, so be sure to pop over there and look and see who else is participating this year.
Posted by Derek Ash at 8:01 AM