So Payday Friday is my official day to visit Goodwill. As I've explained before, I sometimes make quick stops here or there for a couple quick items that grab my eye, or sometimes we make a special trip out to one of the bigger stores on the weekends as a family, but Payday Friday is the day I comb the Ellsworth store, top to bottom, inside and out to find the geeky stuff that makes me go "Mmm."

So what did I bring home today? Not a lot honestly. I found six items to buy, and three of them are right here: 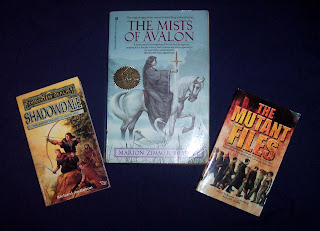 So I always find a few books, it's just a given, with the volume of books to pick through that I will find a few that tickle my fancy. So I'll start with those. 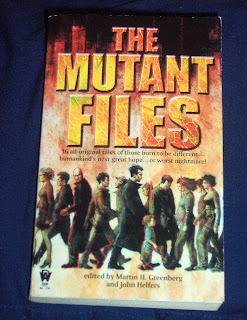 I'll start with this one first, as it's the one I have the least to say about. Edited by Martin Greenberg and John Helfers, from DAW publishing, "The Mutant Files" is an anthology about people born with a little extra sumthin'-sumthin'. I'm always willing to give anthologies a shot, because even if I really enjoy just one story out of th emix, I consider it worth it. And I like the topic. Got this one for .99 cents. 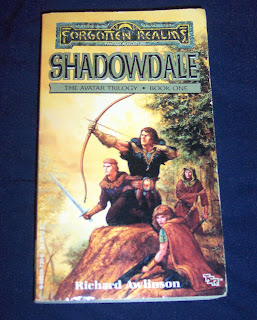 As a general rule I don't usually buy or collect many of the official TSR role-playing world novels. I will pick up Ravenloft books if I see them, and the Forgotten Realms books about Drizzt Do'Urden by R.A. Salvatore in the big collected editions, but not much else. But then there are the the Avatar Trilogy books. With the names of famous landmarks in the Realms, like Waterdeep, Tantras, and the above book, Shadwodale, the story follows a band of adventurers during the Time of Troubles, when the gods of Faerun were cast out of their godly realm and forced to take on physical avatars in the physical world. I thought the idea of gods made flesh was a fascinating one, and some of the later developments involving the main characters were mind blowing to the 8th grade me, back when I read this series. So when I saw this at Goodwill tonight for .99 cents, I decided to try and find the other two books and read them again, and see if I was as impressed now as I was then. 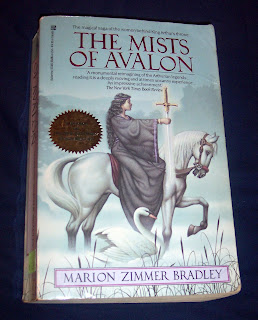 Marion Zimmer Bradley's "The Mists of Avalon" is one of those classic pieces of modern fantasy that everyone is supposed to have read. Well, I havent... but at .99 cents I couldn't NOT pick this gargantuan mammoth of a book up. I mean, seriously. Look at the picture I started this post. I paid .99 cents each for those three books. And this one is like... 3 or four books in one. It's kind of intimidating... but I am going to get my geek cred up where it should be. (when I am moved into my new house, and unpacked, look forward to a post about other books in this kind of "How do you call yourself a geek if you haven't read that?" category that I have picked up at Goodwill in the past few months.)

Now onto the items that are not books: 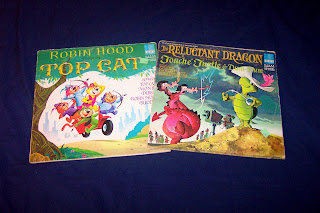 I have a pair of vinyl records from 1965 that feature Hanna-Barbera characters in retellings of old fairy tales and children's stories. 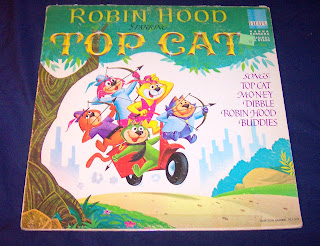 First, there's Top Cat in Robin Hood. I love that Robin Hood and his Merry... cats... are riding a vespa. 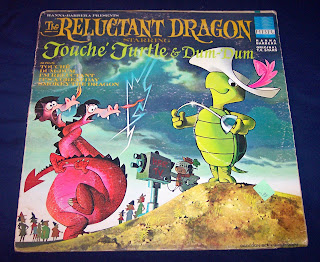 Second, we have Touche Turtle and Dum-Dum Dog in the Reluctant Dragon. I have no idea what this story is, but look at that cover! I have no way to play these records and see what kind of condition the sound is in, and it really doesn't matter to me. I just love the artwork. These are the second and third albums I've bought from Goodwill just for the cover art. I plan on hanging these up somewhere and displaying them prominently, and with pride. For me too, it's great that these are not just Fred Flintstone or Yogi Bear. These are semi-obscure members of the Hanna-Barbera canon, and that makes me appreciate the fact that they even exist even more. Oh, and at .99 cents apiece, I felt absolutely 0 guilt picking them both up.

One last item to go: 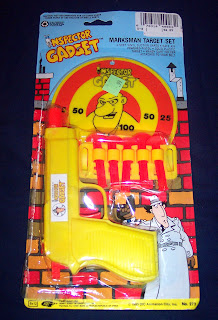 It's not exactly the most exciting piece of merchandising I've ever found, but I was pretty excited when I realized that the loose dart gun pieces and accessories scattered all over the toy department shelves all fit back into this Inspector Gadget blister pack. What we have here is an Inspector Gadget "Marksman Target Set" from 1993. It comes with a villainous target, a belt clip with 5 darts, and a yellow dart pistol with an Inspector Gadget sticker on the side. Since I managed to get all of these toys back into their original packaging, I will leave them in it, because for once I feel like the full display effect is achieved more by the package artwork than by the toy set itself.

So that's pretty much it. I picked up three more books, but I'm adding them to the stockpile for my Countdown to Halloween in October.

I also picked up some non-Goodwill purchases, but since every blogger everywhere has a set of these items and has blogged the HELL out of them, I don't really feel like I have anything new to say. Let's just say I'm really digging a new set of action figures based on an old line of action figures, and leave it at that for now. Maybe when the internet has cooled on them a bit, I will post a review of my own.

Until then, I will continue to bring the geeky finds I bring home from Goodwill and elsewhere!
Posted by Derek Ash at 7:01 PM