It's League of Extraordinary Bloggers time once again, and this week we're talking about mixtapes:


"What songs were forever being looped on your car’s stereo back in high school. A cassette could only hold a dozen or so songs, so that’s the magic number of songs to list. If your car didn’t have a cassette deck in high school, go ahead and pretend it did, you punk."

See my mix tape after the jump!

So, in high school I was suddenly starving for music. Up until that point most of what I had listened to and loved had been music from popular movies, the radio, and what my mom would listen to. When I hit highschool and suddenly MTV seemed a lot more relevant to me... I started discovering new music through my friends, in SPIN magazine, the discount bins at music stores (we still had those) and just about any other place I could find weird, fun new stuff.

I gave them names like "Booming Vibrations" or "Dark Moods". I would always include a collectible art card from a artist like Brom, Charles Vess, Larry Elmore, or whoever else I'd gotten ahold of from the local comic shop as the cover.

I don't have any of those old mix tapes anymore, but I can tell you that some repeat offenders on them were Nine Inch Nails, Tori Amos, They Might Be Giants, Prince (I thought it was the height of cool that I still enjoyed Prince's music in a time when everyone else was starting to hate him). Songs from the Best of Blondie, ABBA, INXS, The Crow Soundtrack, The Batman Forever Soundtrack, The In The Name of the Father Soundtrack, among other various sources genuinely pleased my eardrums back then.

The playlist I present to you below is what I could remember from a mix I called "Square Pegs". These are 12 songs that exemplify the sort of musical variety I wanted to hear in a mixtape back then.

In the Name of the Father - Bono and Gavin Friday
This song is all frentic rhythm and beat, with Bono just losing his shit to it. I love a couple of other songs on this same soundtrack, including Sinead O'Connor's "Thief of Your Heart" and The Kinks "Dedicated Follower of Fashion"

Prince - Starfish And Coffee from themark1100 on Vimeo.
Starfish and Coffee - Prince
Loved everything about this album, and I am a genuine Prince + the Revolution fan. After the NPG started up, he started to lose me. Sign O The Times was a transition from the Revolution albums to the albums that would come later. And it has some damn fine songs. I just loved how this one track almost played like a song off of Prince's long-lost children's album.

Birdhouse in Your Soul - They Might Be Giants
There are not many songs/albums by TMBG that I don't at least like, much less love. Some other favorites (just from that time period) include Triangle Man, Snail Shell, and We Want a Rock.

Pretty Good Year - Tori Amos
I was absolutely in love with Tori Amos. She was completely batshit insane... and I loved her for it even more. There is not an album of hers from Little Earthquakes until Scarlet's Walk that I don't enjoy. After that, I sort of tuned out. 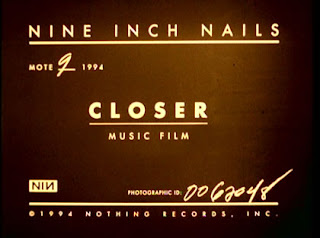 Closer - Nine Inch Nails
(I didn't embed the video because it is FILTHY. So if you want to hear this one, go check it out on youtube for yourself.) NIN was one of my favorite bands in highschool, and I tracked down every single I could find. The remix of this song "Closet to God" is amazing. Filthy. But Amazing.

Comedown - Bush
I just really loved this song. I didn't really get into the rest of the album as much, thought I did like it. Went to see a Bush concert after I had graduated from high school one year when the Goo-Goo Dolls were the opening act, and I remember liking them better (at the time). I would stay up late at night watching MTV, just waiting for "Come Down" to come on. In the days before the internet.

Insulated Man - The Drovers
I actually wanted to use a different song by the Drovers from the Blink soundtrack called "The Boys and the Babies" which just has some genuinely wild fiddling at the beginning. I absolutely could not find a version of it to share here, but "Insulated Man" is my second favorite from the same soundtrack.

Beetlejuice Theme - Danny Elfman
Just good, solid Elfman. I would also put the two Harry Belafonte songs onto my mixes quite often as well. When The Nightmare Before Christmas came out, there was just no stopping the Elfman goodness from bleeding all over my mixtapes.

In Liverpool - Suzanne Vega
Suzanne Vega's albums 99.9 and Objects of Desire are my absolute favorite works of hers, even though I appreciate some of her stuff from the 80's as well. I was obsessed by this song about longing and all the imagery in it. I'd never seen the video until today... and I don't really like it.

The Sweater Song - Weezer
This song just felt so... cool to me in high school. It was off-beat, the lyrics seemed so random, and the video told a sort of pseudo-story.

Today - The Smashing Pumpkins
This song still makes me smile and cheer up when I'm needing it. I put it on nice and loud in the car and just rock out.

Ridiculous Thoughts - The Cranberries
(Hey, is that Frodo?)

This mixtape project took me BACK, let me tell you. Memories of riding in the car with my friends, at get-togethers with my friends from the drama club, or just sitting alone in my room, thinking my hormonal teenage thoughts... A lot of these artists I still listen to on a regular basis, like Prince and They Might Be Giants. I like my music even quirkier these days.

My thanks to the League for such an inspiring topic this week! For some other great mixtapes from years gone by check out:

- Brothermidnight over at Green Plastic Squirtgun is going to share his music tastes from high school with us just this once... but he'd really like us to just forget this ever happened.

- Hobgoblin over at the Monster Cafe has a mixtape with an even more diverse and random selection than mine. Must be seen to be believed.

- Reis over at Lair of the Dork Horde posts a playlist that will literally (I mean LITERALLY) thrash your face off.

- And our fearless League leader Brian over at Cool and Collected celebrates with a hair bands with a full can of Aquanet! (it's kind of catching in my throat...)

- And Jon over at Geek Cultural posts a mixtape that actually BLEEDS 90's goodness.

I'll be back tomorrow with some more Goodwill goodness! Until then, Happy Hunting!
Posted by Derek Ash at 3:48 PM