Well, it's time for another entry towards the League of Extraordinary Bloggers theme of the week.

Reboot and Recast! "Remake one of your favorite movies with a cast of current Hollywood stars." And what movie will I be rebooting and recasting? I think I'm going to have to go with... 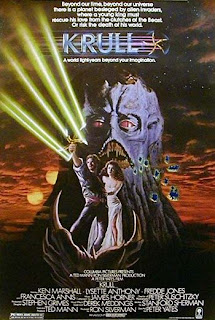 See how I'd do it after the jump!

So Krull in the 80's was this:
The story of a monstrous, almost god-like extra-terrestrial evil that comes to a world of swords and sorcery and proceeds to wreck stuff up. It was full-on operatic cheese that in some ways works as a fun examination of how a sci-fi antagonist would fare against fantasy protagonists. There are wizards and shape-shifters vs. space ships and laser weapons.

But my God the Cheese!
Unfortunately, unless you have a very strong stomach for cheese, melodrama, and outright stupidity in some of your storytelling... this movie doesn't hold up well. Fortunately, I can appreciate all of those things under the right circumstances... but even I have to admit that most of my love for the original movie has to do more with the nostalgia factor and my childhood self being awed by the contents of this movie. 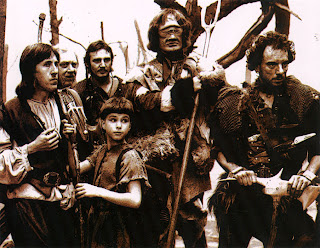 The Plot
So in the original, The Beast arrives on the planet Krull with his army of Slayers in his mountain-like starship. He's there to prevent a child from being born who could some day rule the galaxy. The child will be the offspring of Prince Luke... errr Colwyn and Princess Leia... errr Lyssa (not siblings). The wedding is crashed, the princess is kidnapped, and Prince Colwyn must try to save her and destroy the Beast. He begins his journey with the help of Ynyr the Old One (Think Obi Wan here, folks) and his traveling party quickly swells to include Ergo the shape-shifter (sort of a C3-PO) ,  Rell the cyclops (the group's enigmatic monster buddy, a la Chewie), a band of outlaws lead by a man named Torquil (the bad ass Han Solo of the group). The journey quickly becomes a sort of Rube Goldberg quest involving just about everything BUT directly saving the princess (all the different tasks serve their different purposes towards the whole, but its all a bit convoluted) and like, half of everybody dies. I won't tell you which half. There are flying horses, a giant white spider, evil doppelgangers, and a fortress that teleports to random locations every dawn.

How I would do it: The Borg Come to Westeros.
First off, the lines between Sci-Fi and Fantasy would be much more clearly defined. The Beast, the Fortress and the Slayers would all be clearly techno-organic in nature (think Warlock from New Mutants) intent on assimilating all the organic matter in the area near vicinity of the fortress. The Beast would be a parasitic, invasive hive mind very similar to the aliens in Slither and The Faculty, terribly lonely, longing for a connection, but with a cold, evil, machine-like bent. Princess Lyssa would be his captive, but instead of wandering around like a refugee from a Fleetwood Mac album cover through a series of conch shell interiors, she would have her mind invaded and messed with during her captivity as the Beast toys with her. The Planet of Krull would be a classic world of heroes with swords and sorcery as their source of power. The original movie did a pretty good job of having gritty, flawed heroes with its filthy outlaws and quirky magic users. The real benefit of updating this world would be to give it the same treatment as current hits like The Lord of the Rings and Game of Thrones. With the technology at our disposal these days, the environment would be more lush and rich, the magic effects more awe-inspiring, and the production values in general more believable. Plus, the technology of the villains would be that much more amped-up if done in the style of movies like (gasp! dare I suggest it?) the Bay-Formers movies. Spectacle has its purpose as long as it doesn't eclipse the script. Speaking of the script, a ton of the on-the-nose melodramatic speeches and interactions would be jettisoned for a newer, fresher feel. With this large a cast, a writing style seen on a project like Joss Whedon's Firefly/Serenity could be exactly what the doctor ordered. This reboot would not be a farce or parody of the original, but a good sense of camaraderie and humor sprinkled in with the death and drama would be welcome (All Whedon's strengths). I think focusing the actual quest a bit more to make the story meander a bit less would be nice as well. Keep the Widow of the Web, but so help me GOD, no flaming, flying horses in this movie.

Prince Colwyn and Princess Lyssa
Would now be played by:

Hemsworth would bring the feel of a real hero to Colwyn, with a hot-headed edge that needs to be coolecd by experience. Lawrence would give us more than just a fawning, defenseless Lyssa. She'd have some fight in her.

Ynyr the Old One and Torquil the Outlaw
Would now be played by:

Jones's Ynyr would be more grizzled and tough on Colwyn, which is what is required to hone a dull blade into a sharp one. And Harrington is totally a cheat, because his Jon Snow just looks perfect as Torquil... but he can act, and he would make for a great sidekick to Hemsworth's Colwyn, and there should totally be a action-buddy moment or two between these two heroes from different social classes.

Ergo the Magnificent and Rell the Cyclops
Would now be played by:

Baruchel as Ergo the sometimes successful shapeshifter would serve the same purpose as before, as the much-needed comic-relief character. He's funny and awkward without being too grating. And Neeson is the strong, stoic type that would be just perfect to play Rell this time around. These two characters had a nice moment or two in the original movie, and that could be expanded upon in another father/son type of dynamic, to build on that theme. Plus, Neeson was in the original as a member of the outlaw crew, and cameos by actors from the original films are obligatory.

Then to round out some of the secondary cast:

The Emerald Seer and the Widow of the Web
Would now be played by: 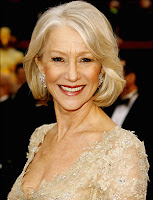 Bill Nighy would give us the most profane, crotchety old Emerald Seer you can imagine. And Helen Mirren will just never stop rocking, no matter how old she gets, so she's a shoo-in as the Widow of the Web. Can you imagine the chemistry between Tommy Lee and Helen? Maybe we can even throw in a sex scene.

The Beast and the Slayers

These guys were all pretty cool for their time period, but the Beast was a creature of corrupt intelligence, and  someone who wanted to twist Lyssa to his will. For that you require a villain like: 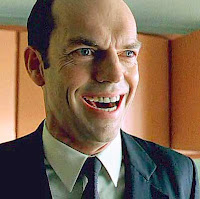 Every monstrous godlike figure bent on manipulating pretty princesses to their will needs to have some sort of human avatar to do the emotional heavy lifting. Weaving knows evil. His Agent Smith is the essence of a manipulative technological parasite, and with some extra effects and his natural ability, the Beast could be unforgettable. The slayers could be anything done with either superb CGI or really great practical effects, , so long as they refelct the nature of the beast, and seem less art-deco and more industrial/inorganic to the extreme: 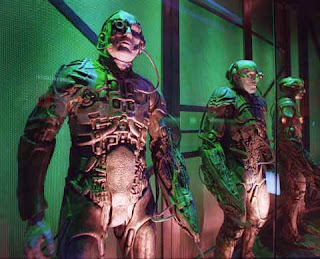 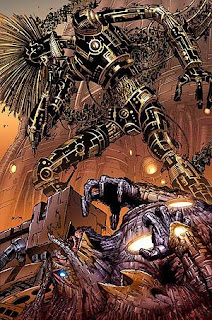 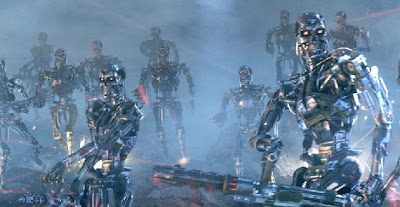 The challenge then becomes: How do the heroes prevail against such odds?

So, that's how I'd do my Krull reboot. Would you enjoy it? Tomorrow I'll be back with more Goodwill related geekiness, but for now, go check out some more of my fellow League-Members' Reboots and Recasts like:

- Pull up a seat at the Monster Cafe and see how fellow newcomer to the League Hobgoblin would redo the movie The Earthling!

- I see that the Reis O'Brien (over at the Lair of the Dork Horde) and I have a similar taste in 80's fantasy films, lead stars, and a Game of Thrones! Check out his reboot of the Beastmaster!

- Howie Decker over at UnderScoopFire has a remake of the Three Amigos (that he in NO WAY wants to have happen) with a comedic cast worthy of at least a few good belly laughs.