So today I'd like to show off a few more graphic novels I've found at Goodwill. There have been many, but today I am going to focus on two titles in particular:

More to come, after the jump!


Now to be fair, while Matt Groening is the creator of the Simpsons... he is not typically the writer of Simpsons comics. So it may be a misnomer to call them Matt Groening's Simpsons Comics... but that really doesn't effect me. Each of the trades that I've found at Goodwill (including the two I mentioned back here) are an anthology-style collection of stories written and drawn by a handful of different writers and artists. Some of the art is done strictly in the "house style" of the Simpsons, while other interpret the material a bit more loosely. As I've mentioned a few times now, I'm in the process of a move, so these books are all boxed up right now... but I wish before that had happened that I had taken some interior shots of the different books so you could see what I mean. 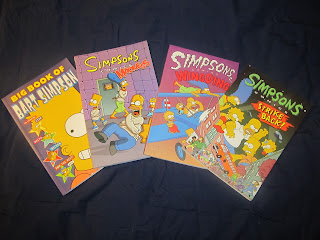 I didn't have to think very hard about bringing these home with me because a) these look like fun b) I am a casual Simpsons fan and c) I am very much a comics fan. "The Big Book of Bart Simpson" was a part of a different haul than the 3 on the left, "Simpsons Comics Madness", "Simpsons Comics Wingding" and "Simpsons Comics Strike Back!"  The volumes pictured above were .99 cents apiece, and they all came from the Ellsworth store.

On the other hand, Jeff Smith's "Bone" comics are consistently hailed as a modern classic of comics. I already own the complete collected b&w edition, which is an amazing read, and I cannot recommend it enough. The story of cousins Fone, Phoney, and Smiley Bone in the mysterious Valley, encountering villains such as Stupid Rat Creatures, and the Lord of Locusts, and making allies in Thorn, her Gran'ma Ben, and Lucius Down is an excellent fantasy adventure with lots of heart and humor sprinkled in. Time magazine even lists the collected edition as one of the top ten best graphic novels ever. 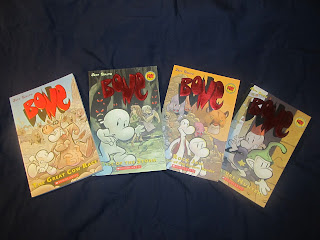 So, if I already own the collected edition you may be tempted  to ask: "Why are you bringing all of these books home Goodwill Geek?" My reasons are twofold: 1. They're the Scholastic published color editions! These tales look amazing in color! Everything about the story is enhanced by the gorgeous addition of color to Smith's original b&w drawings. And they're of a nice, smaller-than-a-trade-but-not-tiny-like-a-digest size.  2. I can let my kids handle these books. I might wait until the boys at least are a bit older... but my daughter can read these ones without me fearing that they will be destroyed. The only four copies I currently possess are "Vol. 2: The Great cow Race", "Vol. 3: Eyes of the Storm" "Vol. 5: Rockjaw, Master of the Eastern Border" and "Vol. 8: Treasure Hunters" But I will track down the other 5 volumes at some point. The two books on the left in the picture cost me .99 cents apiece during one trip, while the two volumes on the right cost me 1.99 apiece on a different trip.

Just a shorty post today guys. With so much going on around here with us moving, I have less time to write, and less items out and about to write about. But I'm going to try to drop a line or two each day, even if it's not always strictly Goodwill Hunting related.