All right, I have a lot of guilt over yesterday's post. So I want to make it up to you with a nice juicy post about an awesome game I found at Goodwill for just 1.99! It's a looong one, but with lots of great pictures of the game.

I present to you: Milton Bradley's Hero Quest!!!

See a Buttload more pictures and details after the jump!

So... when I saw the box for this game at Goodwill, I almost didn't pick it up. Why you ask? Well, because it was sure to be missing pieces (it was) and I felt like my family probably wouldn't be willing to play this with me anyway... (they aren't... though in their defense I haven't actually asked... I'm assuming). But it put me in mind of a game I'd owned as a younger lad called Dark World: 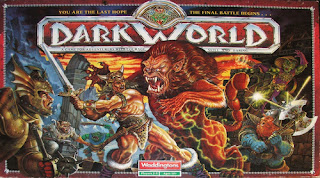 ... and that's what finally won me over. I never owned a copy of Hero Quest when it was originally released, back in 1991 but Dark world was either heavily influenced by Hero Quest, or they were designed by the same team, just for different companies. (I still have the manticore from the game above stashed away somewhere. If I can find him, I'll post a pic.)

Interestingly enough, this game, Hero Quest was also the reason that my favorite Sierra game of all time "Hero's Quest" had to change their name to "Quest For Glory". Just a fun fact. And knowledge is power!

So opening the box, I was assaulted by a rainbow of plastic and cardboard, all well loved, and well played with. Someone got to play this game a few times. Or at least, they played with all the stuff in this game. 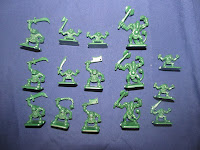 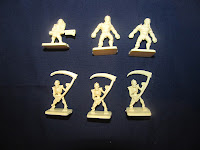 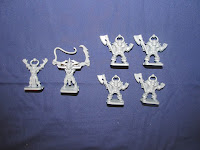 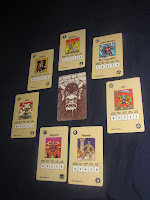 First: behold the LEGIONS of EEEEVIL!!! We've got your standard white-colored undead here, with a few skeletons, a couple of mummies, and a cleaver (I guess?) wielding zombie. An assortment of green orcs, goblins, fimirs and several weaponized variants on those... and finally a host of gray chaos warriors, a chaos wizard, and a big-ass gargoyle sans wings (I told you some pieces were missing...) but still looking mighty intimidating indeed. He's the guy with the whip. You can see the stat-cards for the monsters on the bottom there. The slavering horned beast in the middle is actually the art on the back of the cards and it is one of my favorite things about the set. I love cheesy old role playing game artwork! 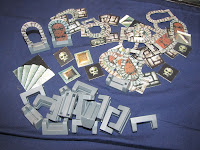 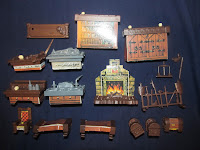 Here we have the gameboard itself, which looks like it should light up and a little plastic game piece of John Travolta should boogie across it. On the bottom left there's a pile of doors, archways, and the little plastic things to hold them up (which, I love you guys to death, but not enough to put all those doors in all those thingies just for a picture... there's a couple there, see?) and some skulls and things to mark deathraps and other secret things on the board. On the bottom right you see a pile of furniture. These are scattered across the board to create environment and obstacles (and I'm sure they serve other purposes too, I just haven't read ALL of the instructions yet. Get off my back.) The furniture was all assembled inside the box, and looks to be in pretty good shape, with a few exceptions. 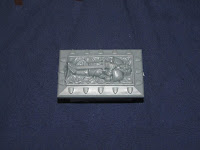 I love the detail put into the pieces though. They didn't really skimp much here, as you can see from one of my favorite pieces here, this sarcophagus. 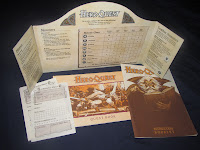 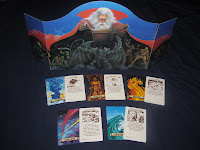 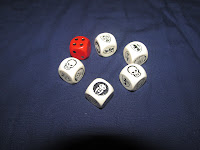 Here we have the hero characters, Dwarf, Elf, Barbarian, and Wizard with their figures and character cards. The Wizard figure is missing, and both Elf's and Barbarian's swords have seen better days.

Left middle is a shot of the storyteller's screen, the rule book, the quest book, and a pad of character sheets. I was impressed that all of this was still in there, to be honest. These are usually the first to be separated from the flock and tossed in the trash.

Actually, I lie... it's usually any form of cards included in the game, and in the right middle shot you can see a series of elemental spell cards, air, earth, fire, chaos, and water. I also wanted to get a shot of that totally METAL art on the front of the storyteller screen. Finally we have the game dice. six in all, one red, the others white with skulls and other random crap on them. Don't know why. Haven't read that part yet. I assume skulls are bad though. 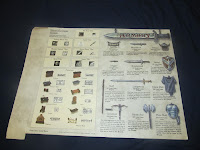 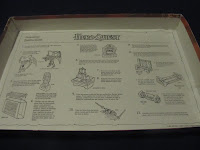 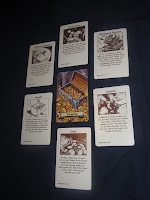 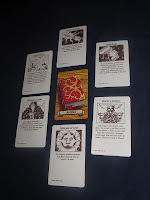 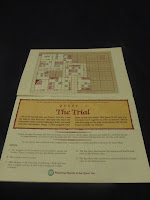 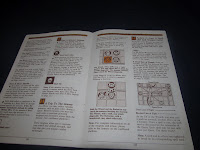 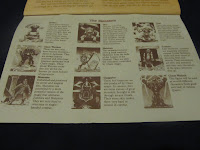 Here we have several shots of the box interior, the instruction booklets, and a sample from the quest book. Also some more of the cards, these being treasure cards and artifacts. Some of the treasure cards are not all they're cracked up to be, as in the mix there are monster attacks and cave-ins. I believe they would be the Monopoly equivalent of a Chance card. The artifacts are magical inventory items used to improve your characters. No monsters or cave-ins in there. I love how much time and effort was spent on every detail. The weapons list on the coverall inside the box is awesome to behold.

Here's some flavor text... just to give you a feel for what you're in for on your quest... so:

I love the ideas behind these types of games. They aren't quite full on Dungeons and Dragons, but it's those players that they're mainly geared towards. They're just more of a junior version. But with the time and commitment you need to put into setting one of these bad-boys up, it had better be one hell of a wild ride! Hasbro tried to reignite the trend with Heroscape  back in 2004, and I went in whole hog for a while... but again, playing this sort of game takes 1.) Time 2.) Space and 3.) Willing participants. And I am usually in short supply on all three. Someday I'll probably end up doing a blog entry on that game too, even though it wasn't even remotely Goodwill bought. But I reserve the right to talk it up.

Back to Hero Quest for a moment: I really adore everything about this set. The box art, the card art, the figures, the flavor text in the booklets... it's all such great fun. This came right out of the early nineties, and it's still shaking off the cobwebs of the late eighties. You can just feel it. The colors, the art, the picture on the back of the box which looks like it MUST have been a comic book ad at some point. I love it all. Yeah, there are some missing pieces... but I can replace those with other things. I've got some seriously awesome How To Train Your Dragon figures that came in a tub like army men, and the dragons and heroes from that set would be PERFECT for this game. So Hero Quest? You're here to stay.

I hope this makes up for yesterday's post, and I promise I will never let things go that south ever again. And remember: Tomorrow is payday Friday! Yay! So there's that to look forward to.
Posted by Derek Ash at 6:43 PM