So, I've been meaning to tell you all about this really great Quick Stop I made at Goodwill last week, and I find myself staying up late to finally get it posted. What was so great about it? Well, let me give you a hint: 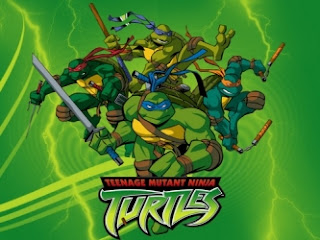 So, the image above is from the TMNT series that was shown back in 2003 and lasted until sometime in 2009. I was never a  watcher of the show, and I'll tell you why. I think at the time, I didn't like the idea of them messing with my precious turtles. I hated that there were way less mutant animal villains, (or that's how it seemed as I browsed the toy aisles) and was flabbergasted when I discovered that Baxter Stockman was now some sort of beheaded cyborg instead of a human/fly hybrid. I pretty much decided to ignore the whole thing and hope it went away. To put it in X-Men terms, the 1980's TMNT cartoon was the Claremont/Byrne X-Men run, and the 2003 TMNT cartoon was the weird, Morrison/Quitely run that scared me. These turtles felt like a high-concept reboot of the concept that wanted to distance itself from the turtles of the past, and just change things for the sake of changing them. So I stayed away.

Now with Turtle-Mania starting to hit again, there seems to be a real love for the nostalgia for the old Turtles that Nickelodeon is definitely trying to capitalize on. I think this time around they are definitely keeping their adult fans clearly in mind as they reboot the series and toy line. But what's funny is that you're seeing a lot of the influence of the 2003 series in there too. Sort of like... in X-Men terms again, when Joss Whedon did Astonishing X-Men and did a beautiful hybrid that melded the nostalgia of Claremont/Byrne, with the new higher concepts of the Morrison/Quitely run. It really embraced and melted down those two concepts into one stronger whole... and I hope Nickelodeon recognizes that same need for nostalgia balanced by something fresh and new and sleek.

Now... I have gone back and fully explored the Morrison/Quitely run on X-Men, and I love it... So maybe it's time to go back in time to 2003 and explore the TMNT reboot of that decade. And a great way to begin are the cool finds I made in my latest Quick-Stop at Goodwill:

2003-Series TMNT Toys (and a couple from the 2008 TMNT movie too)!
Now, mind you, there was this creepy woman being creepy in the toy department when I showed up, and she was pawing through everything, oblivious to the TMNT goodies laying around. But as soon as she saw me pick up a Turtle figure... all bets were off and she needed to look at them all too. She only got a handful of figures that I didn't really want anyway, but jeez, I hate people who hover like vultures and watch to see what I'm going for and then try to get it before I do.

The tires on this vehicle fold down to form some sort of hover-craft. It's a fun vehicle with a nice, detailed design. And it was only .99 cents! Any doubts I had about the 2003 TMNT series evaporated when I saw the price tag. I try not to buy stuff just because it's cheap. That way leads to madness... and hoarding. But that .99 cent price tag literally made the decision for me to pull the trigger on this one.

The shell sub is incredibly cool, and would be even cooler if it had both of its arms intact. I almost left it behind, but then the woman grunting under her breath while she sniffed the other Turtle toys might have gotten it (I also try not to buy out of spite. I am usually pretty nice, and let stuff get away from me if I feel like it's going to a kid who will play with it, or a fellow collector who will treasure it... but not grunty McSaddlebags. She can just go hang.) and I figured that if I kept its missing arm turned to the back, it would still make a nice display piece. ALSO .99 cents!!! I was pretty psyched to discover these first two vehicles for .99 cents apiece, even if the sub was missing an arm.

Next up I found this Battle Bike Raphael, which was the only item that cost me 1.99... but which I can totally justify, because it includes a figure and a vehicle. All the other figures and vehicles I bought were .99 cents apiece, so this pairing for 1.99 seemed pretty legit. Again, though, this was one where I looked at it and wondered if I was just getting carried away. Was I just getting swept up in a buying frenzy, or did I really like this motor-cycle riding, extreme-sports geared Raphael? Spoilers: I decided I did.


Finally, there was a pile of ridiculous variant TMNT figures, and Happy Meal figures. And looking back, there is a part of me that wishes I had convinced myself to scoop up every figure I saw there and just start growling "MINE!" at the weirdo woman with the serious hygiene and social issues. But when I really looked at them all, these were the only ones I really wanted. And once I got home and realized that I had picked up a cave-man version of Splinter, I thought I would probably have left him behind too. Each of the four you see above was .99 cents as well... which is a deal slightly over-shadowed by the vehicles I picked up first. No weapons were included except for a weird wooden-style sai that obviously went to some cave-man Raph who wasn't even in the neighborhood. The two figures on the right are Leo and Donnie from the 2008 computer animated feature film. Donny is in pretty good shape, but Leo has some major scrapes on his toes and left knee, and his sheath is missing, so that cool as hell chest strap you see there? Yeah, I have to tape that down or it flops forward and sticks out in front. I think the real star of the four is April though. This probably has to be my favorite action figure version of Ms. O'Neil. 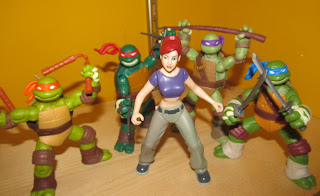 She's not wearing the yellow jumpsuit, which is fine, and she looks like she goes perfectly with the newly redesigned action figures. I mean, look at them! How sweet is that line-up right there (they are getting pissed that I still haven't reviewed them...) with April as the center of attention?

So anyway, for under 8 bucks (because I have Goodwill discount card) I brought home a bag of TMNT goodies. I was excited as SHELL.

I'm still in the process of moving, but we are so much closer to being done now than we were just a week ago! Soon I'll have pictures of the new Geek-Cave, which will be undergoing extensive shelving additions in time... when I can afford it. Buy my real point is that my posting may still be a bit sporadic over the next few days/week. I hope to be back VERY soon with my awesome Payday Friday finds, and I'm still sitting on some nice stuff I brought home from the Brewer Goodwill a little while back, so there's that to look forward too... but most importantly, a TON of stuff is coming out of boxes soon, and I will get pictures, and share all my Goodwill (or otherwise) Goodies with you soon!!!