A Handful of Single Items

I know I've spent some time detailing the awesome grab-bag finds I've made at Goodwill (and there's more of those to come) but today I thought I would focus on some single items that I've picked up at Goodwill. these are things that have been found sitting all by their lonesome and were brought home to live on my shelf: 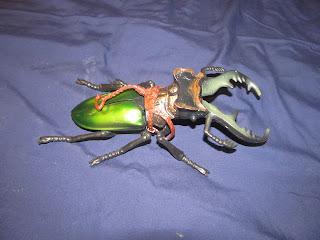 Find out more after the jump!

I picked this stag beetle toy up for .99 cents. I brought it home. It clacks it's jaws together at the push of  a button. It has a leash. It's wings lift up and reveal some sort of storage or footholds. The copyright info on the belly didn't give me much, reading only "Chap Mei 2007 Made in China All Rights Reserved". After hours of searching the internet for "Stag beetles with harness" or "stag beetle toys" I finally slapped my forehead and thought to Google "Chap Mei" and "Stag beetle" together, and found a lead on what the hell this thing is. I found this article over at Action Figure Insider. Apparently it's from a line of knock-off action figures produced for stores like Big Lots and Rite-Aid, called Adventure Heroes. It's included in two different play-sets, the first being the "Giant Crawler" set and the other being the "Sky Wing Playset" both pictured below:

Another toy mystery solved thanks to the internets!


The next item I'll mention is this Rufus the Naked Mole Rat bobble-head from Disney's Kim Possible. I had never watched Kim Possible while it was on, but I was aware of it, and I was aware of the fact that a naked Mole rat had a prominent role on the show. For years now I have owned a squeaky toy of Rufus wearing a sombrero that was from an old Kim Possible Happy Meal. He's goofy and wonderful, and always has a prominent home on my shelf. so when I saw this huge bobble-head of Rufus all decked out in his Buenos nachos look... I knew he would have a home with me. I paid 1.99 for this guy, and never regretted it once.

Back in July I detailed my love of William Joyce and his children's book creations. Rolie Polie Olie is one of those creations, and so when I found this toy for 1.99 I thought it would look great in my collection. I love robots anyway, so Olie here is a no-brainer. He still works too! If you pull out his hands, arms, antenna, or push the buttons on the front of his shorts, he makes various noises. It's hard to tell the scale here, but he's about 6 inches tall and his head is about as big around as a baseball.

Last up fr today is this Buffy the Vampire Slayer action figure. She's not the best reproduction I've ever seen of the character, but since I love the show and I have no plastic on my shelves to prove this, this figure will definitely do in a pinch. She was carded when I found her, but I open everything for play-- I mean display. She has a collection of other accessories that were included, but they're all packed away for now, so you can see her decorative stand, crossbow, and stake. Pretty much the most iconic weapons anyway. She also came with a dagger and a second stake. She was 2.99, and a good deal in my opinion.

Each of these items were picked up at different times, but they all represent a little a-ha moment for me at my local Goodwill.
Posted by Derek Ash at 11:52 AM