So, today was Payday Friday, which comes once every two weeks. It is a bi-weekly holiday because it marks my regular visit to Goodwill. now, I occasionally sneak in additional visits on Laundry Day, or on trips to other towns with my wife and kids. But this is Payday Friday... and it is the Goodwill visit I look forward to the most.

It turned around after a while, and I found a handful of fun books, a couple of mugs, and a toy I was actually very excited to bring home and display on my shelf.

First of all, the half-off color is currently green. So when I found one of these first two books, and saw it was half off, I laughed out loud and knew it had been left there specifically for me, considering the League's assignment this week: A book about Road trips, "Road Trip USA"! by Jamie Jensen, from Moon Travel Handbooks. 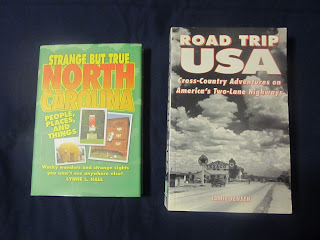 See More of Payday Friday's Haul after the jump!

Included in the book are all KINDS of awesome, out-of-the-way sights to see and places to visit. And it's broken up in a really interesting way, by various stretches of road, such as Route 66, "The Mother Road" or US-50, "The Lonliest Road", and even US-83, "The Road to Nowhere". All the photos are in b&w, but they get the job done. It's a heavy tome that you could seriously stop a burglar with, and with it's green 3.99 price tag, I only paid 1.99 for it.

I also found this cool book about North Carolina (My mother's side of the family is all from NC, so this was a must-have) "Strange But True North Carolina" written by Lynne L. Hall, published by Sweet Water Press. It's an excellent collection of landmarks, eateries, festivals and events, famous hauntings, weird laws, and even a run down of the various celebrities to come from the Tar heel state. At 2.99 this is a bit steep for me to pay for a book on the average, unless it's something really special... which I felt this was. 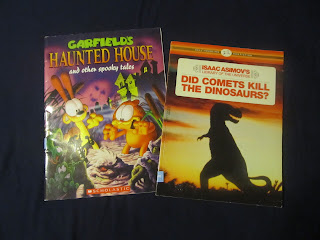 Next we have a couple of obligatory children's books. One is an anthology picture book (not comic strips) of Garfield horror stories, "Garfield's Haunted House, And Other Spooky Tales". I have nostalgic feelings towards Garfield since my aunt has a huuuuuuge Garfield collection from waaaaay back, and I always loved staying up to watch the Garfield specials around the holidays. Garfield may not be the comedian he was back in his heyday, but I still have a soft spot for that fat old cat. (Plus I can work this into the Halloween books pretty easily). This one was .99 cents.

The second book is "Did Comets Kill the Dinosaurs?" a kids science book written by none other than Isaac Asimov himself! This is an anniversary edition of the book, but I still thought this reprint from 1990 is pretty spiffy. Another .99 cents down the dinosaur's hungry gullet. 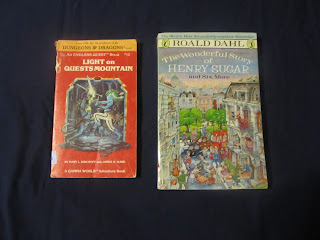 Next we have another one of my personal favorites, a Dungeons and Dragons Endless Quest book, "Light on Quests Mountain", which to be fair is not Dungeons and Dragons at all, but instead a Gamma World choose-your-own-adventure story. Buuuut tomato, tomato-- wait... you can't hear me saying that out loud... nevermind. .99 cents.

Then there's "The Wonderful Story of Henry Sugar, and Six More" by the ever amazing Roald Dahl. I thought I had every children's book by Dahl at this point, but discovered this one today. I was pretty excited.  It was worth every penny (and then some) of the .99 cents I paid. 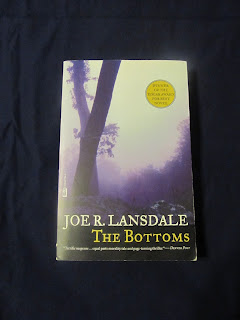 The weirdest thing happened. I had a passing thought of Joe R. Lansdale while I was browsing today, and thought it would be pretty cool if I found one of his books. No joke. Lansdale is responsible for the stories behind the movies Bubba Ho-Tep and the Masters of Horror: Incident On and Off a Mountain Road, and one of my absolute favorite Batman stories ever involving the God of the Razor "Subway Jack" which he then wrote a comic mini-series about. So I'm always interested in a little Lansdale. So when I found this excellent looking read, I thought it was very odd, sinc eI had just been thinking about him earlier, and hoping I'd find one of his books. I figured it would be more than .99 cents... but it wasn't!
That's it for the books. Now, I also made some non-book finds that I was pretty excited about: 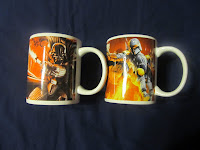 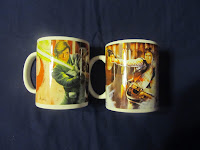 This is a two-sided set of coffee mugs, one featuring Vader vs. Luke, the other featuring a shoot-out between Boba and Han. These were 1.99 a piece, and they're from 2011, but I liked them very much so I brought them home. 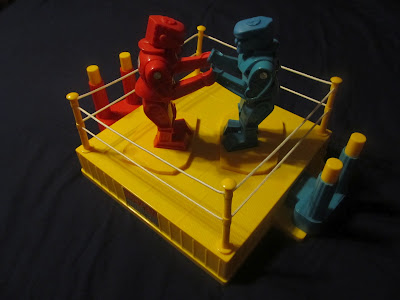 Rock 'Em Sock 'Em Robots! I found this after having given up on the toy section, and heading over to books. I returned for one final swoop through toys and found this behemoth was freshly on the shelf. I love the look of this game, and it looks excellent on my shelf, so I was happy to pay 3.99 for it in the end.

So what felt like the worst Payday Friday ever turned out to be a pretty great haul after all. '

It's a Payday Friday miracle!