So here's a thing that happened to me today and was pretty exciting... I got some mail!

Of course, when I arrived home, I tossed the package on the bed, left briefly to see a man about a horse... and when I returned, this is what I found:
It seems that my new Teenage Mutant Ninja Turtles were a bit miffed at not having been featured on my blog yet. So they weren't letting me open this package until we came to... an understanding. I promised them I would put up a review within the next few days, and they let me open the package (with some help).


See what we found in the package, after the jump!

Michael Lewandowski over at the super-awesome Memories of Toymorrow blog, recently had a giveaway. He wanted to celebrate his blog getting 10,111 pageviews, and to do so, he was going to randomly pick a couple of his followers who "wanted in". And.... jboypacman (the guy behind the also super-awesome Revenge from the Cosmic Ark blog) and I both wanted in... and we won! Out of the loot, I wanted a particular action figure, and a set of books. Michael sent the rest of the loot to jboypacman.

And today... my loot arrived!!! Let me tell you... with all of the packing, and paperwork, and the insane amount of stress involved in moving to a new home within the next week or so... winning this contest and receiving this package were like little smile-inducing atomic bombs in my brain.

The package was decked out in Michael's trademark trippy optical illusion from his site, and Donny was planted squarely on top to prevent any premature opening. Once we made ourselves a deal:


I let the heroes in the half-shell take over, and Leo and Raph made short work of the packaging tape with sword and sai. Donny accidentally took a tumble under the lid, but the rest of the gang felt it was time for some bubble-wrap body-surfing. I found myself... mildly jealous.

They quickly got back to business and (after retrieving Donny from under the box) made a discovery: Batman! (The original "fat-face" 1989 Kenner Batman Movie action figure, with his utility belt retraction action still working!)  The guardian of Gotham was bound in a strange white material, as if gift-wrapped! Had the Joker finally achieved victory and wrapped up our Dark Knight in a pretty bow? Could the caped crusader be -gulp- dead?

Nah. He was just playing possum. He gave the teen turtle titans a bit of a tiny scare and then quickly freed himself from the nefarious wrappings. There followed a brief misunderstanding that led to a bloodless yet action-packed altercation between our heroes (not pictured... but it was incredible) they quickly realized they should ally themselves against their mysterious common foe: the wrapped gift that had been Batman's travelling companion in the box.

They steeled themselves for the unknown horrors that surely awaited them beneath the colorful comic-book wrappings. They decided the best defense was a good offense, and dove into their dirty work with a gusto!

In a wild frenzy of shredded (oops... wrong choice of words) obliterated gift-wrap, the mysterious package was finally laid bare! A set of vintage TSR Dungeons and Dragons books! Included were The Dungeons and Dragons Expert Rulebook, and Dungeon Module U1: The Sinister Secret of Saltmarsh! Now I loooves me some vintage D&D almost as much as I loooves me some vintage Batman action figures! 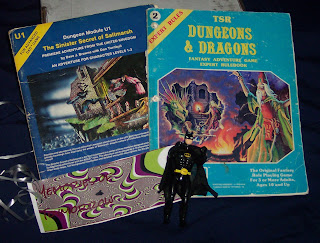 Once the package was unwrapped and thoroughly gone through, the Turtles returned to their shelf, content in the knowledge that they would get a proper review on Goodwill Hunting 4 Geeks in the coming weeks. I leave you, dear followers, with this final shot of my ill-gotten loot, and also a final thank you to Michael over at Memories of Toymorrow, for rocking so gosh-darn hard!

I'll be back soon with more Goodwill Goodies, so keep your eyes peeled!