Another Bag of Wonders

So today's a big one. I want to focus on another grab bag I picked up at Goodwill once upon a time.

Yessss... there will be toys. These were special ones too. I love finding old treasures at Goodwill. And the post earlier this week about Tri-Clops and Ram-Man was indeed a precursor to this one... but I found THIS particular bag of wonders first. In fact, it could be easily pointed to as the one purchase that changed me from a casual Goodwill shopper... into The Goodwill Geek! 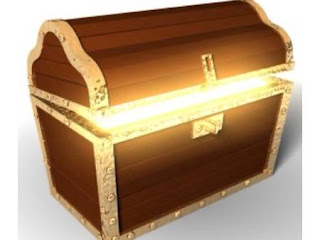 Find out what toys I found, after the Jump!

The Goodwill Geek's Origin Story: A Tale of Tragedy and Woe
When I was a kid, I loved action figures. I was born in '78, so I was a child of the eighties, and a young lad of the 90's (it wasn't until around the age of 12 or 13 that I finally gave up action figures and toys, and mostly then only because my mother bagged them all up and took them to the dump, insisting I was too old for them...). So I really lived in the Golden Age of Action Figures. I hit the prime time for the original Star Wars line, the original 3.75 GI Joe line, most of the Teenage Mutant Ninja Turtles, and many, many more. When I was very young, my collections of Fisher Price Little People, Star Wars, Transformers, and Masters of the Universe figures, when piled on the floor in their entirety, could easily have toppled over in an avalanche and crushed the little tyke version of myself. Unfortunately, we moved around a great deal when I was a child, and the bulk of my toys would often be left behind in the moves... so bye bye to all of them. My Ewok Village, my Castle Greyskull, my Grimlock the Dinobot... all left behind in various moves.

The Geek Begins: But Has So Much to Learn:
As an adult, I sit and stew, thinking of those toys, and wishing I had them back. This is part of what motivates me to be an adult collector. So when I finally made it a goal to start tracking down toys from my childhood, I did what most do, and I started with eBay. Expensive, stressful, not-all-it's-cracked-up-to-be eBay. I started small, with a few Real Ghostbusters toys, and a couple of TMNT, MotU, and Thundercats toys that had been favorites of mine. Panthro, Leech, Baxter Stockman, and Granny Gross were some of those early purchases.

And then... the Turning-Point!
It was within that same year that we got a Goodwill in nearby Ellsworth, ME for the first time. I had not really been inside of a Goodwill store in ages because the closest ones were in Belfast, Brewer, and Bangor, and all of those stores were about an hour or more away. Early on I was still really mystified by Goodwill, and was only checking it out casually, even though I'd already made some great finds (I'll have to share my very first geeky Goodwill purchase during their grand-opening another time). The day it turned into pure crack that would make me a lifelong addict was the day I found a grab-bag in the glass case at the front of the store containing ALL of these:

As you can see there were eight Masters of the Universe figures, and one Sectaur. Also in the bag was a vintage Saurod figure from the MotU film line, though his helmet was broken off, and a set of limbs from a Modulok, though no heads or torso pieces. And full disclosure, the Hordak in the photo above is from eBay, because the Hordak from my Goodwill bag broke about a week later, and his legs came loose (the red wrist-shield/bat thing is from Goodwill though). I sold those pieces off on eBay in this lot:

But when I saw that bag of action figures in that glass case... I knew they were for me-Me-ME-MEMEME. I didn't dare leave that spot, because I was afraid ninjas would then rappel down from the ceiling, smash the glass, and make off with those toys in a puff of ninja smoke. This is a thing that happens occasionally.

I was sort of shaking a little bit, maybe, (not like a crack addict, mind you... just regular anticipatory shaking most normal people totally experience) when I asked the clerk to let me see the bag. I knew these figures would be some ridiculous amount around 50 bucks, and someone had obviously recognized they were of value to put them there behind glass... and sure enough as I turned over the bag to see the tag, my heart skipped a beat-- 9.99! Wait what? Just under ten bucks for a huge chunk of my childhood returned to me? Sure, Hordak's legs fell off and battle-damage He-Man's chest plate is stuck... but they went up on my shelf nicely.

Just looking at He-Man makes me turn into a 5 year old all over again. He literally encapsulated everything I thought a hero should be back when I was a little tyke.

A lot of people vote Buzz-Off out as a lame hero, but as a kid he was one of my absolute favorites. The fact that both of his wings were still attached was awesome. I never cared for his weird bee-face helmet. Mekaneck... well, I had him as a kid but I never really cared about him one way or another. I do think that since he apparently wears a blue unitard under all his armor, it doesn't matter that he's missing his chest-plate, because he still doesn't look naked. He still makes a welcome addition to the good guys on my shelf though.

I never had Clawful or Webstor as a kid because Clawful was apparently impossible to find, and Webstor terrified me more than anything has ever terrified anyone anywhere, ever. I think it was the spider thing. And yes, I realize that is not Clawful's chest plate, it's Zodac's... but it matches his color scheme, and it covers his massive Master's moobs, so I'm totally keeping it on him.


These are the two that I was most excited to find until Hordak's legs popped off... (guys I was DESTROYED). I was actually considering tracking down both of these figures on eBay just before this visit to Goodwill. So that was really strange and destiny-ish to me. Skeletor, Beastman, and Merman were my unholy trio of evil as a kid (before Hordak showed up and dethroned all others) so Merman is another one of those figures that instantly transforms me into a kid again. He even has his armor, but I was disappointed that he didn't have his corn-cob sword included. I could have just glued Hordaks legs into place so I could display him... but that just felt like cheating. I HAD to replace him because Hordak is the SHIT, and he was the boss of every single other villainous action figure I owned as a child. Somehow he was one of the only action figures to survive every move to a new place we made.

The Commander Waspax figure is from the Sectaurs line (one of the few lines I never collected as a kid, but desperately wanted, because a kid in my neighborhood had the WHOLE set, and I was SO jealous...) and was an odd but pleasant surprise. He stands taller than the MotU figures, but he looks great, and makes me want to start tracking down some more of those toys as well.
So this was IT. The purchase that did it, and now, on a semi-bi-weekly schedule, I faithfully return... to see what wonders I can unearth from the depths of... Goodwill! And now... I am the Goodwill Geek!