So today I want to focus on just one treasured item I found at Goodwill a while back. I spent a little more than I would for the average item at Goodwill, but have absolutely no regrets. You'll see why in just a moment. What is this item that I treasure so dearly, and that I want to dedicate an entire blog post to?
Well, here's a hint: 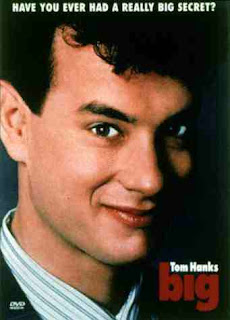 See this wondrous item after the jump!

So, the movie Big came out in 1988 and it dazzled the 10 year old me in a way that a lot of other movies had never really managed to. It was a movie about magic with not a single special effect to be seen... and it was all about my own experience as a child: powerlessness.

Big was a movie about a boy named Josh who wanted the kind of power over his life that a child can simply not have. Since that power was not available to him, he wished to be an adult. He wished to be Big. But he didn't just squint his eyes shut and blow out the candles on his birthday cake while making the wish. He didn't wish on a shooting star, or throw a penny down a well for Corey Feldman to steal... 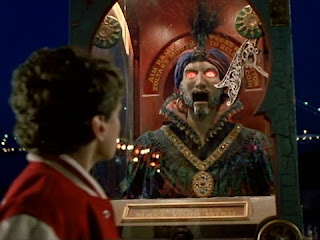 He made his wish on a Zoltar machine on the boardwalk. Zoltar is a sort of quarter operated arcade-game-slash-fortune-teller-machine that appears as a man in a turban inside a glass case. After depositing your quarter, Zoltar opens and shuts his mouth as you aim a ramp at him, hoping to land your coin in his mouth. If you succeed, you receive a card stating: Your Wish is Granted. And then... magic happens.
Below is a video of a replica of that machine built by Roger Hess in 2008. It's almost completely identical, and gives me the same chills that the machine in the movie does:

An official Zoltar mug! The mug was made in 1996, 8 years after the movie was released in theaters. I found this at Goodwill over in the kitchen wares department for 3.99. He was just sitting there, staring at me from between a bunch of mugs with painted cottages and fruit on them. Zoltar! At Goodwill!

The paint is not exactly spot on with the movie version of Zoltar, but he's almost every bit as ominous and mysterious as he is on film.

Zoltar's jaw is not hinged to allow it to open and shut as it does in the movie (possibly to prevent him from vomiting piping hot coffee on your lap every time you take a drink...) but I suppose you could simply drop quarters into his head to make a wish.

Big was the ultimate wish fulfillment fantasy movie. For kids, it was the wish of being independent, of being in charge of yourself, of getting everything you wanted. And for adults? No one really ever looks at it this way... but for adults it was the fantasy of being able to say "You know what? Thanks, but no thanks. I think I'll be a kid again." And Zoltar made it all happen.

One last thing before I go today: Last week, the League of Extraordinary Bloggers topic was "Road Trip!" many of the League contributed with all kinds of crazy stops all over the map. Well... one Leaguer, Chris Tupa, over at Tupa's Treasures decided he would put together a map featuring a cross-section of locations from various Leaguer's road trips, creating one big League Road Trip! It is beautiful, and you should definitely go check it out. I want to personally thank Chris one last time for doing it, because it was pretty freaking amazing.
Posted by Derek Ash at 3:18 PM