Here's a quick post about a 1.99 grab bag with some pretty awesome toys in it I found a few months ago. It is also a precursor to a big post I'll drop sometime this week, about one of my most favorite Goodwill finds of all time. 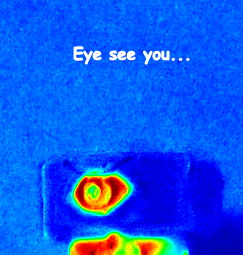 Read more after the jump!

I am always looking for toys from my childhood, so finding this bag for 1.99 was a real exciting treat for me:

Jackalman from the Thundercats line, plus Ram-Man and Tri-Clops from the Masters of the Universe!!! Of course there were no accessories included, as is usual with Goodwill finds, but boy these guys are great all on their own. I think I may take some time and $$$ somewhere down the road and try to get Tri-Clops's armor and sword on eBay, because he just looks so naked. Ram-Man still works perfectly, and I laughed when I saw the little lever sticking out of the back of his foot. I had forgotten what a delicate looking little mechanism it was that made him work. Jackalman's fighting action is broken, so his arms just hang limply at his sides, but he's so cool to look upon anyway that I totally don't even care. He makes the third vintage Thundercats figure in my whole toy collection, and only the first one that I've come across by chance. I paid 1.99 all together for these three guys, and I left that Goodwill feeling ridiculously happy.

As I said before, this is a precursor to a bigger entry later this week, so stay tuned. I'll be dropping a nice juicy post about one of my absolute favorite Goodwill finds so far.

In related news, a fellow League of Extraordinary Bloggers member, Brothermidnight over at Green Plastic Squirt Gun, is doing a series of posts on eleven wondrous finds he made recently at his own local Goodwill. He doesn't have the same sort of Goodwill experiences that I do, so he's titled the post revealing the first three items "One good trip can make up for 10 bad ones". I suggest you go over and check out what he found! It drives me almost insane with jealousy... but anyone who finds a great geeky deal at Goodwill makes me geek out as well.

Happy Hunting!
Posted by Derek Ash at 9:24 AM