As I mentioned earlier in the week, I went to Bangor and Brewer ME this past weekend to go school shopping with my family. While there, I made sure to stop into the Goodwills in both of those towns. Today I'm going to share with you some of the things I found in the Bangor store, none of which were jaw-droppingly amazing or anything, but there was one toy in particular that made my day.

I'll post the stuff I found at the Brewer store some other day coming up.

But for now: Bangor. I'll start with the books. There's always books. 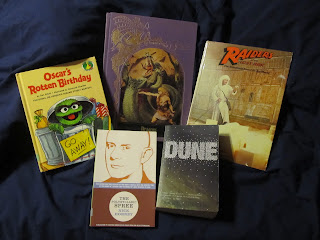 More details after the jump!

First up is this Raiders of the Lost Ark: The Storybook based on the Movie. 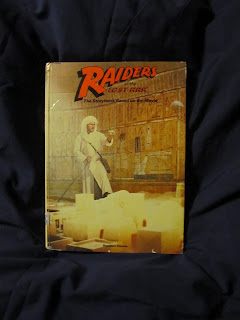 I love finding old book adaptations of awesome films, and this one gets bonus points for being a kids' picture book. 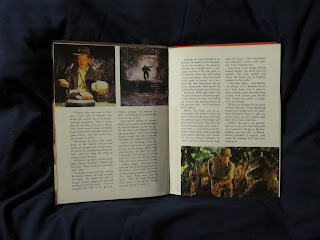 As you can see, it's pretty densely written, so this would be one of those storybooks that a parent would have to read to their kids over the course of a week's worth of bed-times... or probably a good, focused three hour binge might cover it. More time than would take to watch the movie at any rate. I was pretty pleased to find this book, even though it has some pages taped into place, I love having old pieces of merchandise from classic, awesome films. I paid .99 cents after Raiding the children's book section. 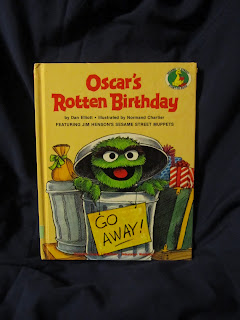 In the short time I have been running this blog, I may have mentioned a time or two that I am a nut about Sesame Street. I especially love vintage kids books from the 70's, and early to mid eighties. When I saw this book I had to have it. So I very ungrouchily paid .99 cents for this adorably written and illustrated book about Oscar's Rotten Birthday. 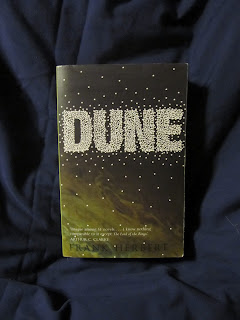 Okay... confession time again. I have never read Frank Herbert's Dune series. But as I mentioned on here about Marion Zimmer Bradley's The Mists of Avalon, it is one of those books that I feel every geek should have under their literary belt. So when I saw this really interesting looking copy for 1.99, I bit the bullet and picked it up. Sometimes that's all it takes for me to be interested, such as seeing something that seems old and dusty dressed up in a new way. Sort of like when my wife tells me to pretend my broccoli is really tiny trees filled with screaming monkeys who are being pulverized by my giant teeth when I eat it. It gets me interested. As soon as I get all my two-thousand boxes of books unpacked at my new house, I am SO doing a post on books I've found at Goodwill that are Geek MUST-READS (I of course have read none of them). 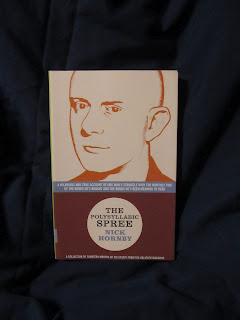 Okay, so Nick Hornby is another one of those authors who I have been getting recommendations to read from several of my friends for YEARS now. He wrote the books that the movies High Fidelity and About a Boy were based on (They are the books, High Fidelity and About a Boy, respectively). I still have not read a single book of his. Now I will correct this, by reading a collection of essays by him about books he has bought, and books he ACTUALLY reads out of the books that he has bought. It actually sounds ridiculously interesting to me, as a bit of a book hoarder myself (as I am continuously demonstrating on this site... There's always books...). I genuinely look forward to reading this book, and hope it acts as the gateway drug to the other books Mr. Hornby has written (My wife read "How to Be Good" and was kind of "meh" about it... but I'm still willing to give him a try). I paid .99 cents for this book. 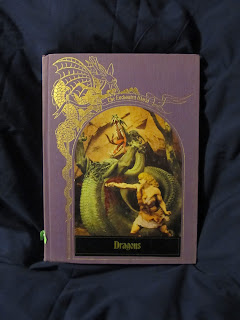 I loooooooooove (in a way that can not adequately be illustrated by any number of 'O's) Time Life Book's "Enchanted World" series. I only have about half of the series so far, and whenever I see one I don't already have floating around in the wild, I pee a little. So this was an embarrassing purchase for me.

There used to be (back when there was a navy base in Winter Harbor, ME) a local event called "Trade Days" where the navy families being transferred each year would try to dump as much of their stuff as humanly possible, as quickly as humanly possible. So there were yardsales as far as the eye could see. One year I picked up most of my set of Enchanted World books, along with an almost complete set of Calvin and Hobbes collections. I paid 5 dollars apiece for each STACK of those books, and I walked away, whistling Dixie that magical, magical day.

Any chance I have to add to my incomplete set is a chance to feel my heart leap into my throat and kick my tonsils around. I paid 1.99 for this book (not as great a deal as I got on Trade-day... but still pretty satisfying) and I walked away whistling once more. 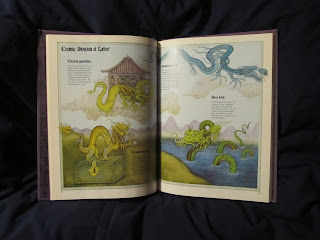 I love the format of these books. I also love the fact that each volume goes in-depth not only in recounting stories from each topic, but also in studying the interpretations of each topic in every way imaginable. They also explore running themes in folk-tales, mythology, fairy-tales around the world, drawing parallels and comparisons from different cultural versions of each. This book focuses on "Dragons", so we get several different versions of dragons, from Oriental dragons to European dragons, to dragons from ancient myth. These are an excellent read, and the varying styles of artwork throughout are just incredible to take in. The books on "Night Creatures" and "Ghosts" are deliciously dark and eerie, and tell some pretty great tales for Halloween. Surprisingly, (or maybe not so surprising to folks other than me) the books on "Giants and Ogres" and "Water Spirits" have some pretty terrifying tales to tell as well. 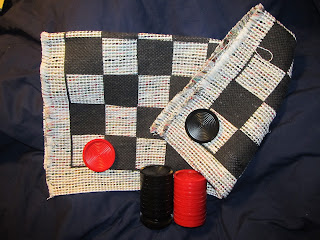 GET COMFORTABLE. THIS IS A STORY. Once upon a time, on the grand-opening of the Ellsworth, ME Goodwill, I found a few pretty awesome things that I will share with you at some point. But today, I tell the tale of an item I DID NOT walk away with when I left that store that day.

I spotted not one, but TWO of those nice blanket checker board sets, with the giant checkers. Some people find them ridiculously tacky... I find them charming. Anyway, not the point. The point is that there were these two women with their carts, babbling at each other about stuff they needed for going "upta camp". You see, going "upta camp" is a favorite pastime here in Maine, and these women were shopping for games to take "upta" with them. SO... I patiently eyed those two sets of blanket checkers, hoping to snag ONE when they babbled their way by and finally left me to browse the toys in peace. So what did they do? THEY BOUGHT BOTH SETS!!! Ludicrous! I call shenanigans! Who on earth could possibly need TWO sets of blanket checkers for going "upta"? I almost went apoplectic right there and then on the floor, but then I saw something else that caught my eye and I felt all better.

Anyway, I found a set of blanket checkers while I was in Bangor on Sunday. Funny thing is... I found TWO sets. I like to think those two women (they were mother and daughter because one was horribly old and the other one was just horrible) were too flummoxed by the cerebral intricacies of blanket checkers and began screeching at each other like howler monkeys while they were "upta" and decided to re-donate the two sets... of which I bought one BECAUSE WHY ON EARTH WOULD I NEED TWO I ASK. I paid 2.99 for the set. End of story. 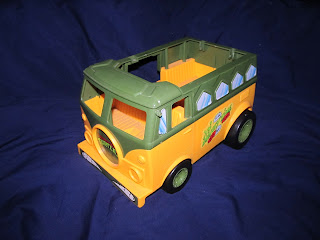 Finally, there is this guy. He's missing some parts, yes. Like a roof. And the big fly-swatter piece off the side meant to swat Foot Soldiers... to name two. But when I saw this item on the bottom shelf, buried under some stuffed animals, I gasped. I was pretty happy with this find, and I have a project planned to spruce it up that I will share on here when I have completed it. 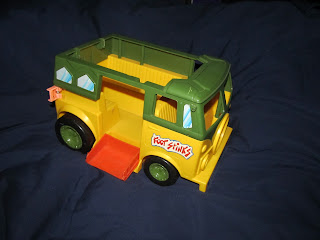 I never owned the "TMNT Party Van" as a kid, and finding big ticket toy items that I wanted as a kid just makes my day, complete or not. Most of the stickers are in great shape, and the toy itself is still sturdy, so I am pretty excited to see how this looks on my shelf when I'm done with it. I paid 2.99 for it, which honestly, felt a little steep, but I REALLY wanted this van, so I just sucked it up.

I also found 8 (!) other items at the Bangor store that I am saving to share as a part of my Halloween countdown in October, so you will just have to wait. Again, this was not the most amazing haul I've ever taken home, but it had a couple of items that I felt were real gems included. Can't WAIT to share my Brewer, ME Goodwill goodies sometime soon! I also made another Quick-Stop at the Ellsworth store Thursday on my way home from work, and made some pretty cool finds that I can't wait to share.

Until I do though, Happy Hunting!
Posted by Derek Ash at 7:52 PM