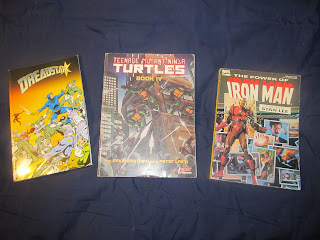 All of the books I show you today are from different trips a while back now, so this is kind of a highlights reel instead of a single haul.

More after the jump! 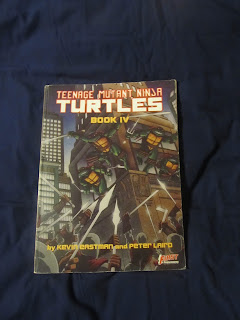 So first up is volume four of Eastman and Laird's original "Teenage Mutant Ninja Turtles" stories. As a kid I watched the shows, and I bought the Archie published TMNT comics that were based more around the show as well. I owned almost every toy in the playmates line, and I counted myself one of the greatest fans among the legions who loved TMNT... but I've never read the original comic books these guys were based on.

When I found this book I saw a way to correct that over sight, so I literally spent another couple of hours pawing through the books section to see if I could find any more of the series, but only turned up this one volume. Volume 4. I don't suppose anything super important happened in the first four volumes anyway... but I'd still like to wait and see if I can find the others somewhere before I dive into this one. This is one of the intrinsic risks of being a Goodwill Geek. You may find the fourth or sixteenth, or simply the second book in some series that you desperately want to check out... but not the preceding volumes. I would have never forgiven myself if I had left this book behind on the shelf however, so there was really no choice. 1.99 Ellsworth, ME. 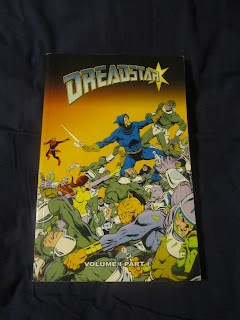 Of course, for every volume four you pick up, there's also a volume 1 of something kicking around that allows you to start things off right. As with this copy of Jim Starlin's "Dreadstar", Volume 1, part 1. Dreadstar is a great series by a great creator, and I was incredibly excited to find this first collection kicking the whole thing off. Dreadstar is a great Space Opera with a crazy cast of characters and an old-school flair that makes me smile. .99 cents (!) Ellsworth, ME. 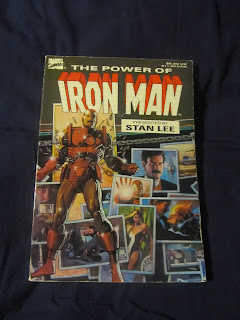 Something else I want to point out here is that these books are used. Sometimes they are used pretty badly. I check things over before deciding to buy or not, but for the most part, if the cover is intact, and the inside of the cook hasn't been torn up or used as a toddler's amateur art thesis, I'll buy it if it's something I like. So this copy of "The Power of IRON MAN" is not exactly mint. It's been read. It's not falling apart, but you wouldn't buy it new from a book store in this condition unless it was deeply clearanced. But the story inside? Pure. Gold. This is the old Marvel Comics Presents format they used to use before they started making trade paperback collections roughly the same size as actual comics. So it's bigger than your average TPB, not by a ton, but enough so it sticks out from the shelf about an inch further. And this collection is all about "Demon in a Bottle" one of the most essential Iron Man stories ever written. It is the story that establishes Tony as an alcoholic, and how he deals with that to become a stronger person and a better hero. Tony's not getting knocked down by kryptonite rocks... he's knock down drunk from scotch on the rocks. (I kill me!) But in classic Marvel story-telling fashion, Iron Man is rife with human foibles that he must overcome just as he must overcome the Titanium Man or the Crimson Dynamo. One of my more exciting Goodwill moments was finding this excellent, excellent book. 1.99 Ellsworth, ME.

I've got a BUNCH more really interesting trades I've found at Goodwill, and even some single comics (though I don't really collect floppies unless they're really obscure or special), but I wanted to keep this one brief. So... I'll be back some other day with some more graphic novel goodies found at my local Goodwill!