I've been waiting SO LONG to do this post... but I just KNEW I wanted to do it for Halloween, so I saved it and saved it forever.

Once in awhile, I come across a book that really hits me in the gut and captures my imagination in a way that no other book or books have before it. Thing is, I have a BUNCH of these. And so I have a special shelf that I keep those books on. It goes beyond just being "favorite" books. These are books that change the way I think about books. They challenge the way I think books can be written. They often open up worlds that I want to crawl into and live within.

Ever once in awhile I find these books at Goodwill. And those are some of my most epic finds. A while back, just before October hit, I featured a bunch of Sci-Fi books I had picked up from Goodwill. Well, originally I had planned to include the two following books. But then I decided to save them for Halloween. I bought both of these at Goodwill, about a week apart, for 1.99 each. 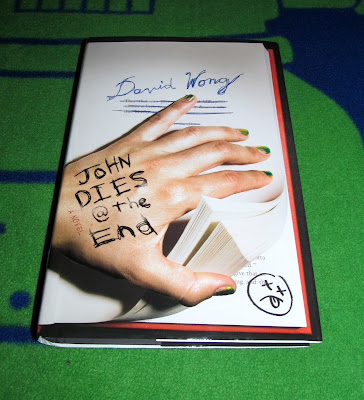 The first one is John Dies at the End by "David Wong", a pseudonym for Jason Pargin, one of the editors over at the Cracked web-site. It starts out feeling like a horror novel, but for all the wrong reasons. As the book progresses along you realize all the traditional horror trappings have been a sort of weird smoke and mirrors game and... that's the most horrifying part. The horror doesn't really matter, because the things that want to keep you horrified are so much more horrifying in their reach and scope that nothing will ever horrify you again. Does that make sense?

The story stars David and John, a pair of amateur paranormal investigators who didn't really choose that role for themselves... but they ended up sort of slacking their way into it. The story isn't completely linear, which I really liked. It's a sort of catching-up game where you have to kind of keep re-evaluating where you are in the plot. This makes things interesting. And the villains of the story exist within layers within layers within layers and have proxies serving henchmen serving other forces that sometimes seem like allies, but aren't, and vice versa. The meat monster is a distraction. The Jamaican is a distraction. The flying attack-mustache is another distraction. Even the giant world devouring beast is just another distraction. The real evil stays in the shadows all along. Does that make sense?

And through it all, what truly makes the book interesting is the voice of David Wong, as he processes the events, and serves as the most untrustworthy and frustratingly oblique (and at other times disarmingly direct) narrator in the history of fiction. There are whole portions of the story where David freely admits he is covering up certain facts... but you wonder if he's just telling you this to cover up the fact that he's really telling you the truth (in the story... I assume this is not a true tale... but part of me wishes it was, and THAT is what's so extraordinary about this book).

Throughout it all, John Dies at the End has a creepy sense of weight to it that is shot through like swiss cheese by its ever-present sense of FUN. It is a fun book. There's a lot of horrible and disgusting stuff that happens in this book... but they make it fun! Overall, it's the kind of book that I want to curl up with again in the future, just to discover what I might have missed on the first reading.

I watched the movie first, before reading the book, and having experienced both now, I will never watch the movie again. It is a hollow shell compared to the depths and weight the book has in comparison. The movie has completely informed my imagination as to what the characters look like... but that's it. 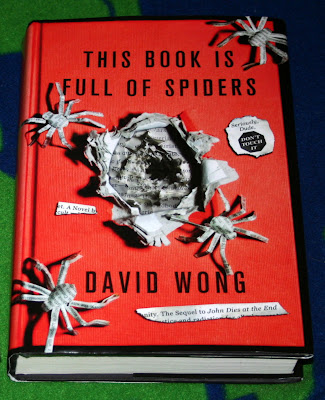 So after I finished the first book, I went back to Goodwill and found the sequel sitting in almost exactly the same spot. I am not lying about this. It was weird. Creepy almost. I suspect it had been sitting there the entire time, and I bought the first book not even knowing there was a sequel, and therefore not recognizing it sitting right there with the first one. And no one bought it for the entire time I was reading the first book... or something. I swear to you all I am not making this up.

So This Book is Full of Spiders is the sequel to John Dies at the End. And I have to say, a TON of people told me I was going to like this one better than the first... and I just did not. Now, I must be clear. I did not dislike this book in the least. BUT, the book is much more heavy-handed with the horror aspects and much less on the same flavor of humor as the first book. And the non-linear story-telling that worked so well for the first one is completely gone as well. That makes sense for the story in general, but it was missed. This one feels way more heavy and dire and is a little bit more depressing in parts than the first one as well. BUT it has so much awesome to it as well! This one deals with the same dark forces as the first, but they have a whole new set of henchmen and a whole new plan that is sooo much more... MORE than the first one. Let's just say... the first phase DOES involve spiders... but it moves swiftly on from that to a whole lot of other atrocious things.

Anyway... these two books together made it onto the shelf where I keep the books that change the way I think about books. They're damn good. And they are guaranteed to make your skin crawl for a variety of reasons. Trust me. Check them out. These are not your grandpa's horror novels. Aaand... they're not for everyone buuuut... they are for ME.

All right kiddos! That's it for tonight! I'll be back with more Gross Goodwill Goodies soon enough! Until then, Happy Haunting!

Be sure to check out all of the great blogs participating in this year's Halloween Countdown! You can do so by clicking this link, or clicking on the Cryptkeeper 2013 banner on the sidebar to the right! Also, check out the "Blog-O-Ween" Halloween Blog collective, again by following this link, or through the badge on the sidebar! Thanks!
Posted by Derek Ash at 8:08 PM