Halloween Countdown Day 12: Catching Up With the Goodwill Geek

I know it's kind of random to post one of these things in the middle of the month... but hey, random seems to be what I'm all about these days. For those not in the know, I wanted to start doing a monthly feature where I just get totally away from the "here's a bunch of stuff I've bought!" type of posts and really focus on some of the stuff I've been doing, or watching, or reading, or listening to. It's a way of putting a little more focus on the "Geek" part of the blog.

Since it's October, and the Halloween Countdown is in full swing, I want to focus on stuff I've been doing to get into the spirit of the season. I'll start with what I've been reading: 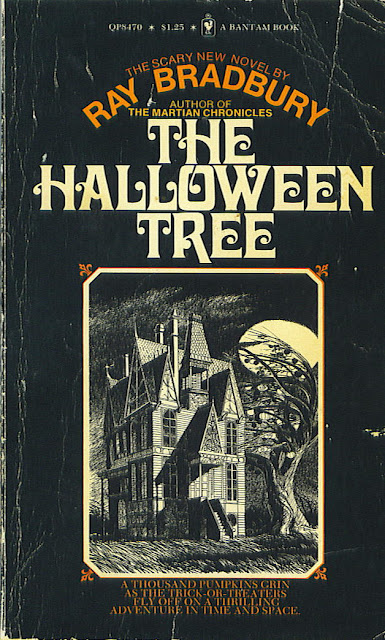 Nothing gets me in the Autumn-y, October-y, Halloween-y mood more than Ray Bradbury's The Halloween Tree I didn't read it last year because I was in the process of reading The October Country (Follow that link for even more Bradbury goodness, including the book pictured above...) which I had recently found after searching for it for what felt like FOREVER. But this book above almost an other, feels like a wonderful trumpeting fanfare for the start of all things Halloween. The story is a great one, a timeless one, and that's why I included Carapace Clavicle Moundshroud (if this book were Disney's Aladdin, Moundshroud would be the genie) in my list of Halloween Icons for this week's League post. I talk about the Halloween Tree quite a bit in the two posts linked-to above, so I won't go on here. Just. Love. This. Book.

Right after I set The Halloween Tree aside, I had already decided to continue on with Joseph Payne Brennan's anthology The Shapes of Midnight, which is a collection of old-school horror stories written back in the 50's and 60's. Brennan's stories are similar in some ways to his contemporaries like Bradbury, and there is a definitive hints of similar elements such as those found in predecessor H.P. Lovecraft's stories... but Brennan's writing style is much simpler, and without the flourishes in language found in those other writer's works. He's pretty meat-and-potatoes in his descriptions, and most of his stories end pretty abruptly instead of having a lengthy denouement where implications and ramifications of events are explored. Brennan's stories are full of monsters: slime creatures and zombie hobos, and murderous madmen are in full bloom here. But there are plenty of creep-out tales involving murder and karmic retribution, or people whose obsessions bring them to their own doom, or to the brink of doom at the very least. There are houses dreamed into existence, haunted backyards that devour prey like pitcher plants, and indescribable creatures dredged up from the ocean depths or even up from the depths of time itself. If you're a fan of books like the House on the Borderland, or even the short works of Stephen King, then Brennan is a writer you will stake you right through the heart.

I'm currently working on the simply titled Halloween which is an anthology edited by Paula Guran and contains stories by authors as varied as Peter Straub, ol' Mr. Bradbury once again, and Joe R. Lansdale. This was a late-arrived birthday gift from my wife, and she kindly decided not to save it for Christmas instead. I'm only about 4 or 5 stories in and so far I haven't really been wowed, but I'm in the process of reading Peter Straub's "Pork Pie Hat" which tells of a jazz musician recounting a childhood Halloween experience that haunts him well into his adulthood. It's been the best story in the book so far, which surprised me considering I did not think I would be a Peter Straub fan whatsoever. This short story has really changed my opinion and I may seek out more Straub later on. Don't know how the rest of the collection is going to be, but hopefully it won't disappoint.

As for television... I've become a fan of FOX's "Sleepy Hollow" which takes great liberites with the source material and-yadda-yadda-yadda. It's not a great show, as it has plot-holes out the wazoo, and the characters just don't behave in a fashion befitting the events going down on the show. After the first episode time-displaced Ichabod Crane just sort of seems to join the police, and works with them in solving all the weird X-Fil-- I mean cases that crop up in Sunnyda-- I mean Sleep Hollow. No one bats an eye at the fact that Ichabod is wearing the same anachronistic Sturbrige Village gear that he showed up in for however long the plot has been going on for. Apparently he washes it in his hotel room every night. And apparently the police are paying for Ichabod to stay at a hotel? There is so much MORE that bugs me about this show too. But I'm done tearing it down for a bit because I am genuinely having fun watching it! I like Tom Mison, the actor that plays Ichabod, even though he tends to be a bit ridiculous in his one-note portrayal of too-accepting-revolutionary-war-guy-in-modern-day Ichabod, with his inspirational speeches and profound dun-Dun-DUN proclamations about demons and conspiracies and the like... because he's just so earnest and likeable, and I get the feeling he's really enjoying the hell out of himself.

I also really enjoy Nicole Beharie's performance as Abbie Mills. With her no-nonsense attitude and troubled past she is the key to making this show feel more like Castle than Supernatural... with broad strokes of both shows influencing just about everything you see here. And the optimism displayed by the show when they reveal the characters will go through seven years of trials as witnesses to the coming of the Apocalypse? Priceless. This may all sound like I'm tearing this show down, but I really do enjoy it! It's familiar and comfortable, and influenced by everything that has come before it. It really just requires you to unplug your brain and check it at the door as they take a National Treasure approach to fighting off the End of Days. Equal parts Goonies and Monster Squad only with grown-ups playing deadly serious as they chew up the scenery. New interpretations of tired old baddies like resurrected witches, Dream-killers, and even the Riders of the Apocalypse are welcome as well. It all feels like retread, but retread you don't mind going over again because it's all so shiny and new. This show has guilty pleasure written all over it... but I feel no guilt whatsoever.

Before I'm totally done with this post, I also want to mention a podcast I have been completely and totally obsessed with for a good long while now.

"Welcome to Night Vale" is a radio news program in the small desert community of Night Vale. The voice behind the microphone is Cecil, who reports on all of the activities going on in the community. Said activities include: killer librarians, hypnotic glow-clouds joining the PTA, armies invading from below the bowling alley, hovering rest-room cats, a dog park being erected in which people... and dogs... are not allowed to walk, a five headed dragon announcing his candidacy for mayor (while in jail), STREET SWEEPING DAY (lock your doors!), angels living with Old Woman Josie, a waterfront boardwalk being built (in a town with no... water... it's a desert town), and hooded figures, menacing government agents, Sheriff's Secret Police, feral dogs, mute children, and a man in a tan jacket with a deer-skin suitcase whom no one seems to be able to describe after they see him, all lurking about, up to no good.

"Welcome to Night Vale" is not for everyone. If you are expecting a serious, "Twin Peaks" sort of story, go elsewhere. This is more Eerie Indiana meets Gravity Falls meets Saturday the 14th meets Lemony Snicket meets Shadow Rock. I am addicted to it. Listening to the ridiculous and dark events of Night Vale through the soothing filter of Cecil's voice, you are struck by how commonplace it all (sort of) seems to the residents of Night Vale. And you begin to understand something is terribly, terribly wrong with the world they live in there... and you wonder what world it is supposed to be... and then there's a Taco Bell commercial or something.

Night Vale has sky-rocketed in popularity in a relatively short period of time, considering it's only been around a little over a year. There's a wiki based on the show already, and a thriving fan-art community. They've already celebrated with a one-year anniversary episode, and a companion book is forth-coming. But all the extra stuff aside, the episodes are just FUN. There's always a twist, always a moment of revelation, always a moment so absurd that I laugh out loud, and always a moment that gives me a reason to think. I urge you to give at the very least, the first few episodes a try.

My favorite episodes so far?

But I really urge you to listen to all of them, all the way through. They are only about 20-23 minutes long and, at the time of this writing, there are only 32 episodes to get caught up on. There's a "Weather" segment to each episode which is really a song played by a different independent artist each week, usually having absolutely nothing to do with any of the stories being told in the episode (as far as I can tell). I really can't make it clear to you how addicted to and obsessed with this podcast I've become. It's like they created it just for me.

Well, that's it for this month's Catching Up With the Goodwill Geek (Halloween Edition). I'll be back soon with more Grave-digging Goodwill Goodies! Until then, Happy Haunting!


Be sure to check out all of the great blogs participating in this year's Halloween Countdown! You can do so by clicking this link, or clicking on the Cryptkeeper 2013 banner on the sidebar to the right! Also, check out the "Blog-O-Ween" Halloween Blog collective, again by following this link, or through the badge on the sidebar! Thanks!
Posted by Derek Ash at 5:18 PM