So, I may or may not have mentioned my love of Zombies on here before. I know, I know, EVERYONE loves zombies nowadays... but a zombie lover like me from the olden-days is finally living in a renaissance that rewards the faithful zombie lover with a PILE of content to fully entertain. I'm not just talking about the 2-thousand zombie films (with more being developed each year) already in existence, or a television show like The Walking Dead (with more on the way), or even zombie comic books, like... The Walking Dead and a dozen other titles... I'm talking about straight up read-words-with-your-eyes books.

I'm a big fan of well-written zombie fiction. Books like Max Brooks's Zombie Survival Guide and World War Z are at the top of the list. I had never read Pride and Prejudice (I don't think watching Bridget Jones Diary counts) until Seth Grahame-Smith added the Zombies, and FINALLY got me reading the classics. The Zombie Autopsies (clinical zombie fiction), Boneshaker (steampunk zombie fiction), and The Living Dead (anthology of zombie fiction) all rest on my bookshelf. So I like zombie books. 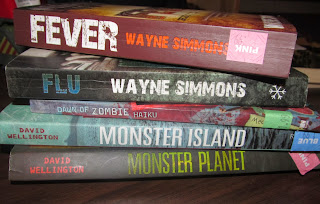 So going through my local Goodwill and finding this nice pile of zombie goodies was just awesome. I paid .99 cents for the two books on top, and 1.99 for the three on the bottom. 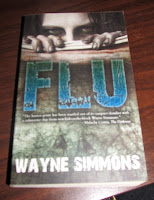 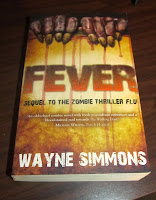 First up is a pair of books by Wayne simmons, Flu and Fever. These are the only two books he appears to have out in his zombie series so far, and I hope they don't suck. They apparently take place in (or start off in) Ireland, and the story spreads with the virus from there. If the Amazon reviews have any true bearing on my future enjoyment of this book, I look forward to cracking their spines. 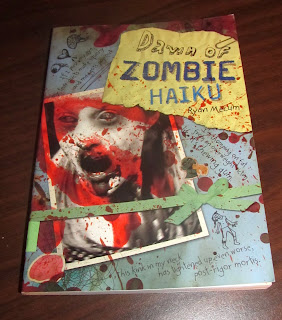 This one's interesting. An odd duck. I thought when I picked it up that it would just be a collection of Ryan Mecum's funny haiku about being a zombie (apparently for that I just wanted Mecum's Zombie Haiku this is "Dawn of" and there's a difference). But Dawn of Zombie Haiku actually tells a linear story even though the whole thing is told in haiku after haiku. It looks like a fun and quick read. Apparently Ryan Mecum is all ABOUT the haiku format, because on top of his two zombie books, he has some about Vampires and Werewolves as well. When it comes to horror haiku, apparently Ryan Mecum has the brain you want to pick. 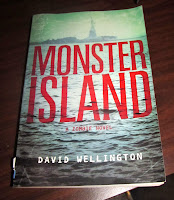 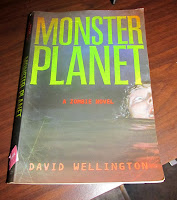 Finally, I found a copy of David Wellington's Monster Island and Monster Planet. Apparently I am missing the second book, Monster Nation which I combed the book section for more than once before giving up. Monster Island is the first book in the series, and Monster Nation is apparently a prequel. Monster Planet takes place 12 years after the first book. So... I may just go ahead and read these two and then read the prequel whenever I manage to track it down... or because I'm paranoid of reading a series out of order, and I am always sure there will be SOME detail in the prequel that will be VITAL to understanding something in the third book... I'll just wait and be frustrated. Sigh. BUT there are some extremely varied and mixed reviews of this series on Amazon, so it should be interesting if I even CARE about the prequel by the time all is said and done. Insert your own terrible zombie pun here.

Anyway guys and ghouls, that's it for me tonight! I'll be back with more Goblin-packed Goodwill Goodies before you can say "Braaaaaaaaaaaaiiiiiiins..." Until then, Happy Haunting!

Be sure to check out all of the great blogs participating in this year's Halloween Countdown! You can do so by clicking this link, or clicking on the Cryptkeeper 2013 banner on the sidebar to the right! Also, check out the "Blog-O-Ween" Halloween Blog collective, again by following this link, or through the badge on the sidebar! Thanks!
Posted by Derek Ash at 1:20 PM