I thought I would really kick off my Halloween Countdown with a bang!!! The first day of October deserves nothing less! As I mentioned a while back during one of my new "Catching Up With the Geek" posts which are totally going to become a regular thing... my daughter has a new love of special-effect make-up spawned from her watching the show Face-Off on SyFy with her grandmother. I've been watching a little bit of it with her lately as well, but mostly just the really interesting chunks of the show.

ANYWAY... I volunteered back in mid-September to be a test subject for her, since she seems to think that she is terrible at doing make-up on other people, and can only really do a good job on herself. I waited and sat on these pics until now because I wanted to feature them during the Halloween countdown. This... is my story. I went into the make-up chair with more than a little trepidation:

I regretted my decision to be her guinea pig almost as soon as she told me that I needed to wear a shirt "I didn't care about" and then put an old pink towel across my lap... "for all the blood." I kid you not, those were her EXACT WORDS. I had already liberally used a cheese-grater on my thumb-knuckle while shredding cheese for tacos earlier that evening... so I thought I had seen my share of blood for the day. Not so dear readers. Not so.

She started off by gluing a wad of toilet paper to my face and then painting a bunch of stuff over it. It surprised me, the thoughts I had while staring at the ceiling... my daughter painting toilet paper onto me. We plugged my iPod into its charger/speaker and blasted some mood music. She initially asked if we could skip Tom Waits's "Murder in the Red Barn" but I told her no. She needs to learn some frigging culture.

The Cramps were uh-huh-huh-huh-ing their way through "Creature from the Black Leather Lagoon" when she finished the burn-wound on my cheek. Rob Zombie started screeching into "Werewolf Baby" as she began the process of gluing a piece of latex glove over my left eye.

We made it through Horrorpop's "Hitchcock Starlet", The Squirrel Nut Zipper's "The Ghost of Stephen Foster" and Captain Clegg and the Night Creatures' "Transylvania Terror Train" before the eye was finished. Man that sucker itched the WHOLE time. But I was a good little guinea pig. I only whined a little bit. I imagined I was experiencing something akin to phantom limb syndrome... except I still actually had my eye and I still actually could have scratched it if there wasn't all this STUFF on it. So it was totally different.

Southern Culture on the Skids howled through "Werewolf" while my daughter applied a scar to my other cheek. Then Voltaire started in about how much he loved eating "Brains!" which I thought was rather appropriate, considering my daughter was zombifying me.


I think the longest part of the whole process when when my daughter decided I didn't look "dead enough" so she had to pale up my face, darken my lips and add shadows to other parts of my face. It felt like FOREVER, considering one of my eyes was sealed shut. Luckily I had the Creepshow singing "Grave Diggers" The Bubblegum Hearts singing "The Ghost of Vincent Price" and the Aquabats "Attacked by Snakes" to get me through the final stages. All in all the process took just under an hour, and we rocked almost all the way through.


Here she is showing off her preliminary "potato head" (her words not mine) sketch of her plan, and then her finished result. Personally I was very impressed with her work (I mean the make-up. The sketch we killed with fire afterwards... Kidding! I kept it in my cave as a souvenir.) 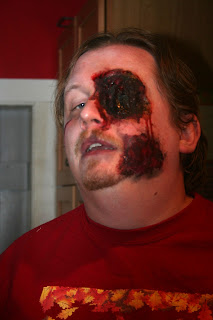 Here's a bit of a closer shot of the finished product... again, I feel equal parts pride and revulsion when I look at this photograph... and I feel that is the correct set of emotions to have welling up inside me at this time. 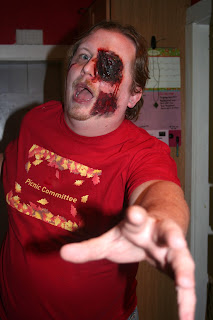 I had my wife take some action shots. As she snapped this one she accused me of being "such a kid" to which I replied "That's why you married me!" ... to which she had to simply shrug and acquiesce.

More action shots here... and as all monster-makers in all stories everywhere eventually learn... my daughter also learned: your creation will ALWAYS turn on you!!! Her brains were... less than filling to my disappointment. I'm not saying she's an airhead... but she is a blonde. 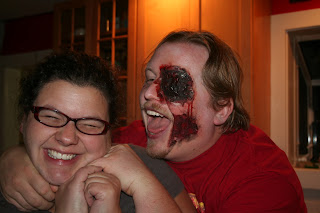 Mrs. The Goodwill Geek thought I was sexy as HELL. She's into big dead kids. She's freaky like that.

Can't even begin to tell you how nice it was to do this with my daughter. That's it for tonight boils and ghouls! I'll be back soon with some Ghastly Goodwill Goodies! Until then, Happy Haunting!

Be sure to check out all of the great blogs participating in this year's Halloween Countdown! You can do so by clicking this link, or clicking on the Cryptkeeper 2013 banner on the sidebar to the right! Also, check out the "Blog-O-Ween" Halloween Blog collective, again by following this link, or through the badge on the sidebar! Thanks!
Posted by Derek Ash at 5:43 PM