I've mentioned on here once or twice that Garfield's Halloween special is probably my very favorite of ALL the Halloween-y goodness they've ever put on TV. So I was pretty excited when I found this at Goodwill for .99 cents:

Garfield in Disguise by Jim Davis! This book was actually done after the T.V. special came out, as an adaptation. For those not familiar with the story, Garfield and Odie pick out costumes and go out Trick or Treating on Halloween night. Garfield's gluttony and greed naturally leave him stranded on an island with a spooky old house, a creepy old man, and a soon-to-arrive ghost-ship pirate crew who are returning to the island to retrieve a long-cursed treasure.

This book is a pretty straightforward adaptation of the T.V. special, obviously with no songs, but often with the lyrics from the songs transcribed right into the dialogue. There are a handful of notable additions to the story, such as the exchange between Odie and Garfield above. In the T.V. special Garfield pretty much just sings a song to Odie telling him to grow a pair and not be such a scaredy cat. In the book, we get a weird, one-page impromptu mythology lesson where Garfield's aim is obviously to terrify Odie.

The scene where Garfield and Odie escape from the Pirate ghosts in the old house has been significantly altered as well. Instead of simply fleeing the house and screaming their way down to the dock outside, Garfield pauses, tries on a ring, admires it for a moment, all apparentl while the blood-thirst pirate ghosts look-on, and then flees the house, screaming his way down to the dock outside. Where this happens:

Which is mostly significant only in that Garfield does NOTHING to help Odie when he falls through a weakened board on the dock. Which now that I think about it, makes no sense in either case. Their objective was to jump into the water anyway. The boat was long gone, and they knew this. Odie falling through the boards would only have gotten him into the water faster. Heck, jumping off the SIDE of the dock would have expedited things too:

Anyway, my point is, Garfield leaves Odie to fall in the show, and the dog is left to pull himself back up all on his own. In the book it seems Jim Davis (or someone) decided that was a bit too harsh, and wanted to redeem ol' Gar-Halloween-Field just a bit 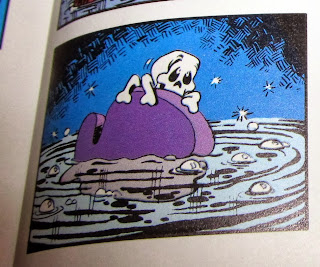 I just thought this was a nice, funny touch. The Jolly Roger on Garfield's pirate hat crawls up to the top of the sinking hat like a spider and tries to save itself from drowning. Just a little throw-away visual gag also not seen in the show. 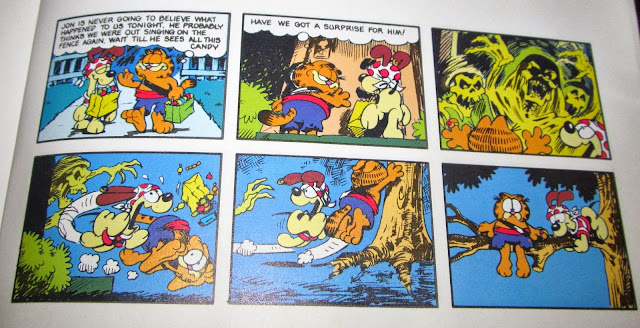 Okay, so now we get to the most dramatic departure from the show entirely. Here we have tired but relieved Garfield and Odie returning home after the night's events. In the show, this isn't even shown. We just see Garfield and Odie find their candy in their discarded boat by the river, and then they're at home getting ready for bed. HERE though, we get more menace from the pirate ghosts. But... why?

Oh yeah! Remember how they shoe-horned in that weird scene with Garfield leisurely taking a few minutes to steal the ring from the pirate's loot when he should have been running and screaming because pirate ghosts wanted to make his skin into a pirate flag? Well here's why. They wanted a few more pages of content and another quick encounter with the pirate ghosts who can apparently teleport from their island all the way into Garfield's house (completely bypassing the cat who has the ring actually WITH him, as he is walking home in the dark) but seem strangely daunted by a tree.

Turns out those pirates just want their ring back, and they poof off away like it's all good in the 'hood. THEN we get the going-to-bed scene. Rather abruptly too. The extra pirate scenes don't add a single coherent thing to this story except maybe page count... but they're a nice effort to squeezes a few more chills and thrills out of the stories. I mean, honestly, who doesn't want more skeletal pirates in EVERYTHING!?!?!? (I honestly think this is where my ghost-pirate obsession BEGAN). And seriously look: 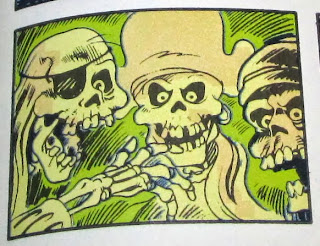 They AMPED UP the pirate ghosts for this book. I mean, look at the slack-jaw on that eye-patch guy! That is genuinely horrifying. I mean let's compare: 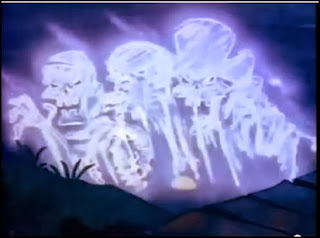 Here they are on TV. Spooky but pretty amorphous and tame really. Nebulous, glowing skeleton-ESQUE figures. 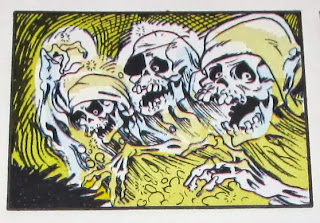 We go from that to this: WHAM full on Creepshow type stuff here.

Anyway, if you're a fan of Garfield, of Halloween, or like me, mostly just a fan of the Garfield Halloween Special... track this down. It's fun. Otherwise, don't worry about it.


Hey Kiiiiiiiiiiiiiiiiiiiiiiiiiiids!!!(to quote Binky the Clown) That's it for me tonight! I'll be back with more Gar-Halloween-Field Goodwill Goodies in the future! Until then, Happy Haunting!

Be sure to check out all of the great blogs participating in this year's Halloween Countdown! You can do so by clicking this link, or clicking on the Cryptkeeper 2013 banner on the sidebar to the right! Also, check out the "Blog-O-Ween" Halloween Blog collective, again by following this link, or through the badge on the sidebar! Thanks!
Posted by Derek Ash at 6:50 PM