It just wouldn't be Halloween without Scooby-Doo! In fact, this won't even be the last time he's featured in my Countdown! But to start, we have this deck of Scooby-Doo playing cards! 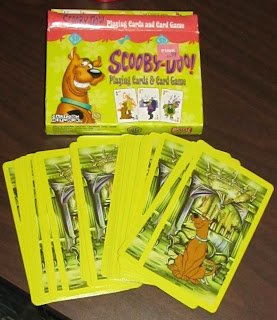 I found these for .99 cents. Unfortunately, three of the cards are missing from the set, so I won't really be able to use these to play... unless I want to alter three of the four jokers included to replace the missing cards. The art on the back-side of the cards is kind of green and simple, but also Gothic and cartoon-y and awesome. So we're off to a nice start. 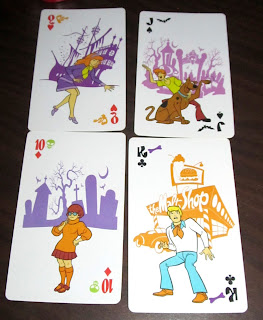 The 10's, Jacks, Queens, and Kings are all represented by a member of the Scooby-Gang. Velma is definitely a 10!!! Shaggy is on all of the Jack cards, Daphne is the Queen, and Fred is King. These are one out of three different poses featured for each of the characters in the deck. And each suit gets it's own spiffy background, so all the skull cards (diamonds) get a cemetery, all the Scooby-Snack bones (clubs) get a Malt Shop, all the bats (spades) get a different spooky cemetery (this one complete with a skull-headed gate and a half-opened crypt) and all the ghost cards (hearts) get a ghostly pirate ship. Fun little details that they didn't HAVE to include. The only weird thing about it is that there weren't enough trumps for Scooby to get his own, so he takes over the entire suit of spades (or bats), even the trump cards for that suit. The only one he even shares is the Jack card pictured above with Shaggy. All of the Ace cards (with the exception of Scooby's own Ace) is shared by Scooby and Shaggy together as well. Fascinating! 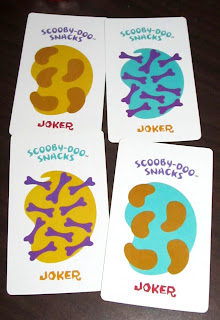 The jokers of the deck are all different kinds of Scooby Snacks. I honestly don't have a lot to say about these. You get two kinds. Dog bones and the more traditional style of Scooby Snack they used to sho on the cartoon whenever they'd bribe Scooby and Shaggy into risking their lives. I think I'd have to be one hungry hippy/beatnik/stoner to let someone talk me into being bait for a swamp monster for a couple of lousy dog treats. 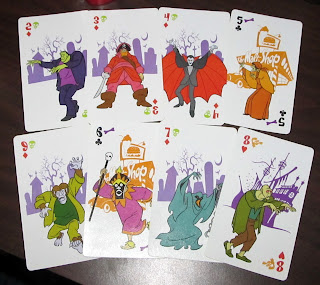 And finally, even more exciting than the trump cards are all of these guys! All the numbered cards from 2-9 in all the suits except for spades are occupied by the monsters! They all dominate their own number, so you always see Frankenstein's monster on the 2's, and the Witch Doctor on the 6's, etc.

So a pretty nicely dressed-up and SPOOKY Scooby-Doo card game over all!

That's it for tonight boils and ghouls! I'll be back faster than the swishing of a cat's tail on the back of a witch's broom with more Ghoulish Goodwill Goodies! Until then... Happy Haunting!

Be sure to check out all of the great blogs participating in this year's Halloween Countdown! You can do so by clicking this link, or clicking on the Cryptkeeper 2013 banner on the sidebar to the right! Also, check out the "Blog-O-Ween" Halloween Blog collective, again by following this link, or through the badge on the sidebar! Thanks!
Posted by Derek Ash at 8:43 PM