So today's post will feature a couple of old mainstays for any classic Halloween Geek. A pair of old McDonald's Halloween Pails! I just found these this season at Goodwill when the Halloween section was first spotted. I am lacking only a witch bucket at this point. 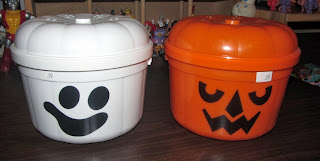 There's a pretty interesting article on these pails over at Sydlexia.com that goes way more in-depth into the history of these pails than I was ever aware of. Apparently, according to that article, the ghost bucket was released in 1989, and the McGoblin pumpkin bucket on the right came out 3 years before that in 1986. I remember having some of the pumpkin ones when I was younger, but not the ghost or witch later on. 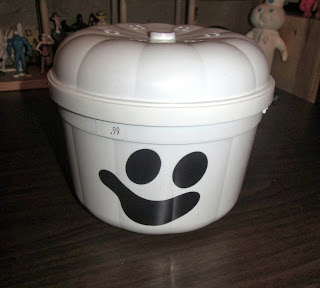 Even though these pictures aren't good at showing it, both of my pails still have their handles. You can still see the white Seasonal price tags on these guys (meaning they NEVER go half-price during their season) and so you now now I only paid .99 cents for each of these charmers. 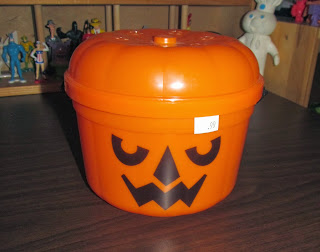 Honestly, out of all the different designs I might have stumbled across at Goodwill, I think I found the two I like the most. I like the sinister face of McGoblin more than the other two pumpkin designs, and the Ghost bucket is far superior to the witch bucket due to its simplicity alone. The look great out on display:

Here they are up on the curtain rod above one of my cave windows alongside the Scooby-Doo Halloween pails that came out last year. I think they look pretty frikkin' snazzy!

Well, that's it for tonight kiddies! I'll be back soon with more Gruesome Goodwill Goodies in just the beat of a terrified heart! Until then, Happy Haunting!

Be sure to check out all of the great blogs participating in this year's Halloween Countdown! You can do so by clicking this link, or clicking on the Cryptkeeper 2013 banner on the sidebar to the right! Also, check out the "Blog-O-Ween" Halloween Blog collective, again by following this link, or through the badge on the sidebar! Thanks!
Posted by Derek Ash at 2:20 PM