It really feels like Target is really the place to find some of the coolest stuff for Halloween this year. That's why I'n going to use multiple posts to feature some of the stuff I bought there this year. This first post... I'm focusing on ONE amazing find. This: 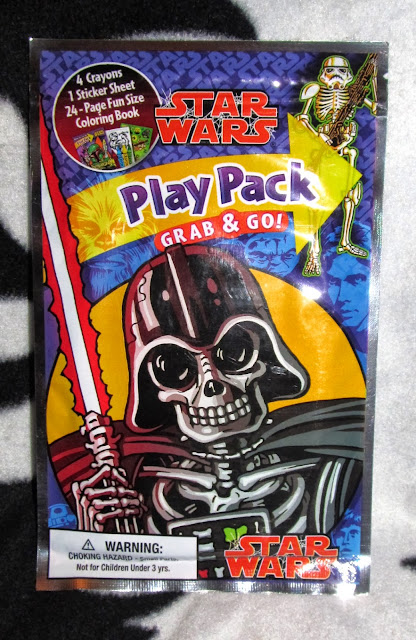 A Star Wars Grab and Go Halloween Play Pack! The first thing about this that caught my eye and MADE me buy it was that skeletal image of Darth Vader on the front. They had other versions of the cover art, but THIS one said "Even if I am filled with nothing but horrible crap... I am worth 1.00 because of this amazing image!" 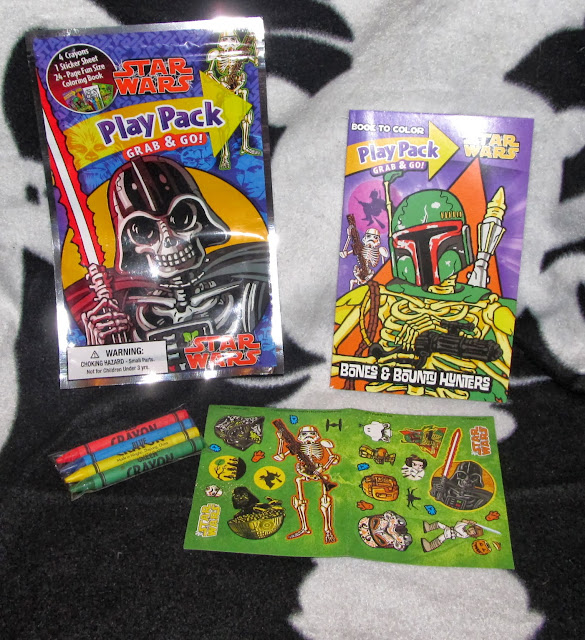 So this is what I got for my 1.00. The amazing cover art, a coloring book, a sheet of stickers, and 4 crayons. The crayons are a throw-away, honestly. But the stickers are great, populated with all of the same great art you'll find inside the coloring book. 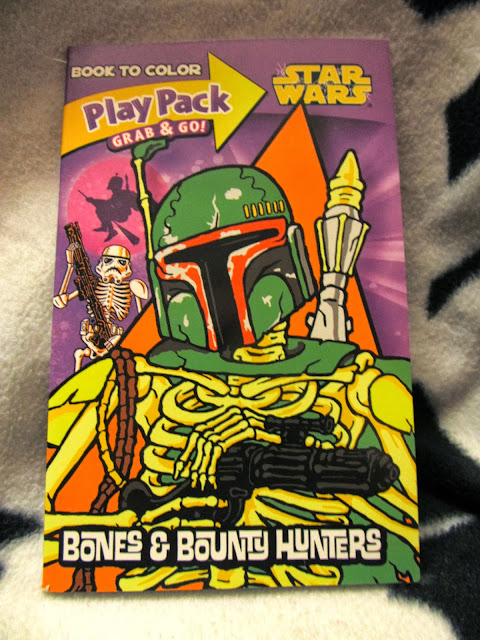 First off, let's take a moment to admire the cover art to the coloring book. There's a bony Boba Fett skeleton. He is amazing. I like the other odd little detials to be seen over his shoulder, like the skeletal Storm Trooper, and a Boba witch on a broom flying in front of the moon. 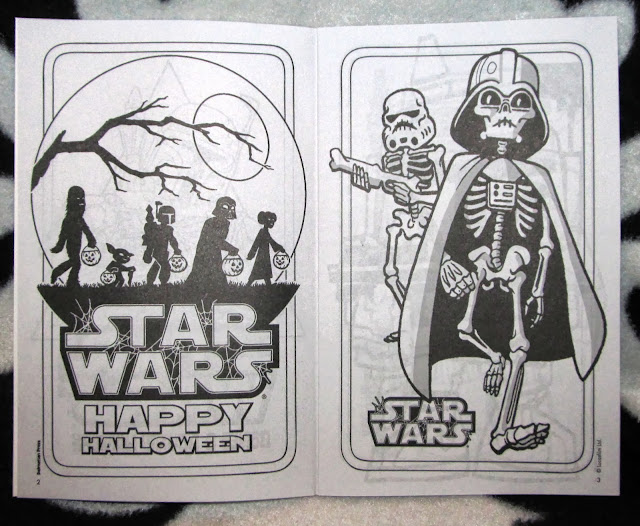 HEre we have a Trick or Treating band of... what? Kids dressed in Star Wars Costumes? Or Star Wars Characters going Trick or Treat together? Or some strange amalgamation of both? Either way they stomp across the grass under the light of a full that's-no-moon. And on the right there, am I the only one who thinks Vader is doing a total Pimp walk? I also love how the Storm Trooper's and Vader's helmets sort of ARE skulls in this picture, instead of them just being skeletons wearing helmets. 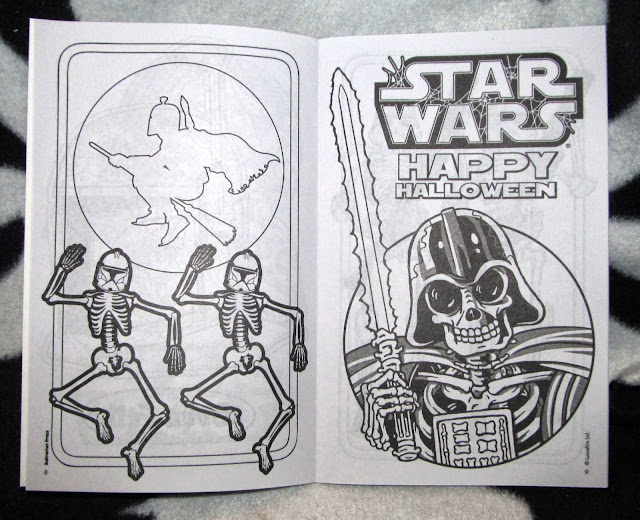 Boba Fett-as-witch makes his debut, along with some clone-trooper skeletons a la Spooky Scary Skeletons... And there's Vader from the front of the package... Look! his light-saber is made of vertebrae! 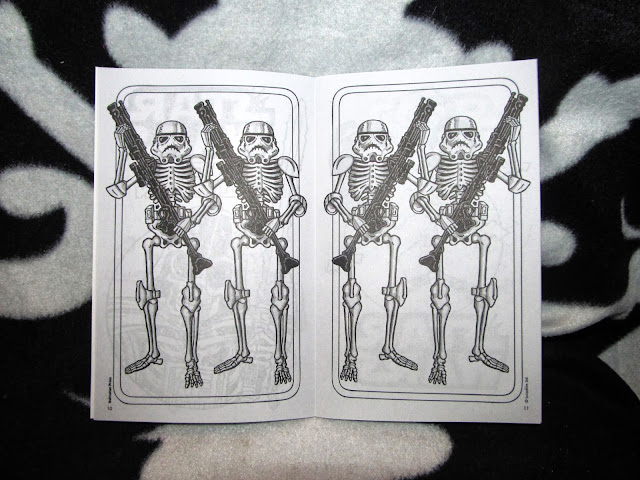 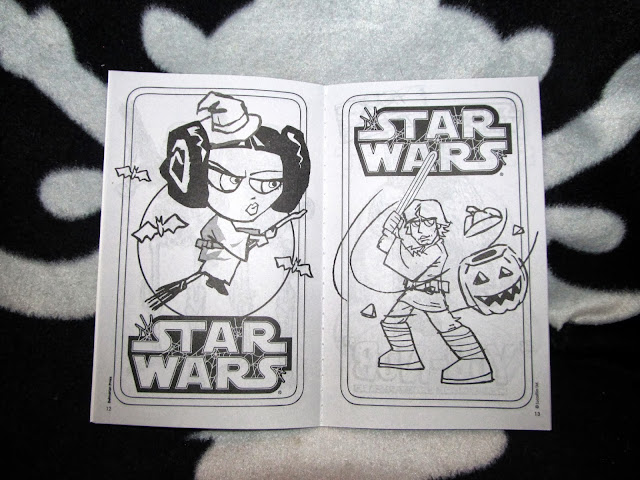 Cutesy versions of Luke and Leia in Halloween activities/attire. 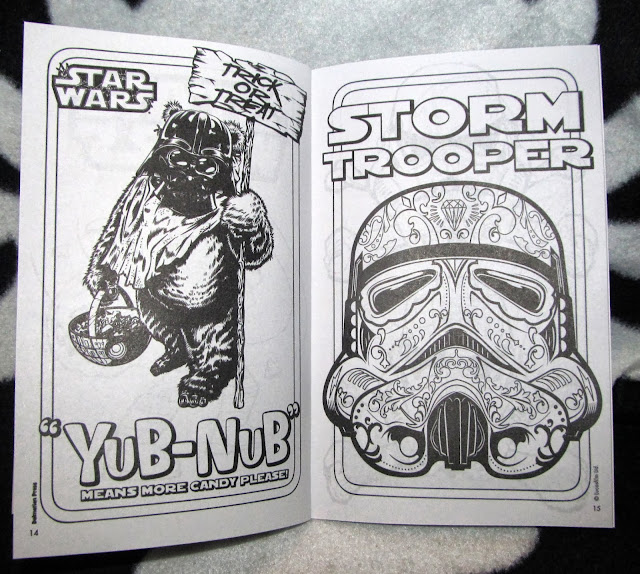 A couple of my favorite pictures here. A Trick or Treating Ewok dressed up as Darth Vader with a Death Star treat pail, and a Day of the Dead decorated Storm Trooper helmet. Simple but effective. 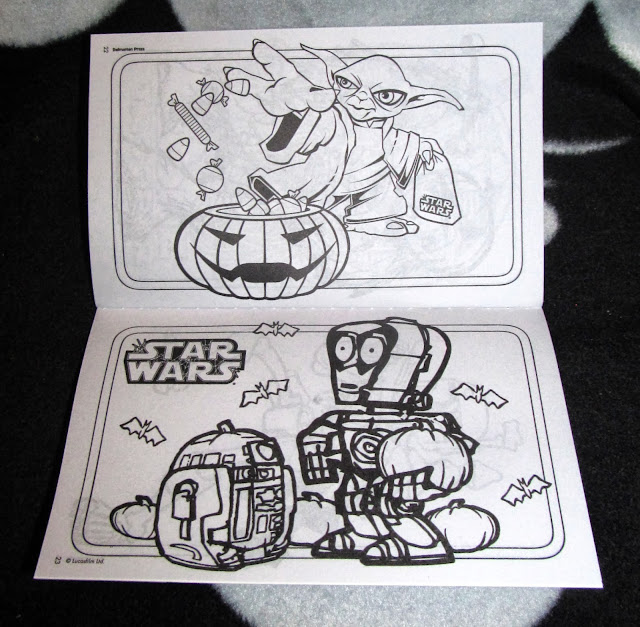 There are more images throughout the coloring book but these are all the ones that I actually like. A few stock images of characters with random "spooky" tree branches slapped on them were in there too, but this Treat-nabbing Yoda and these cutesy Halloween themed droids (R2-Punkin'-D2???) are where I'll be finishing up. I love the simplicity of the idea here, and how effective it was to use Star Wars and Halloween blended together in a weird meta-concept that really couldn't have a life of its own beyond merchandising. I would MUCH rather have seen these kinds of pictures on the McDonald's McBoo pails this year instead of just Angry Birds Star Wars. C'est la vie.

That's it for me tonight children! I'll be back with more Gulp-Inducing Goodwill Goodies sooner rather than later! Until then, Happy Haunting!!!