Even though the Countdown to Halloween has begun, the League of Extraordinary Bloggers still puts out the call! What's the topic this week?

When you hit up the toy store, thrift store, flea market, or comic shop, what are some of the things you’re actively hunting?

And let me tell YOU... this is really a hard one for me. I'm kind of a directionless explorer of a collector these days... but I do have a few items I really do hope to find in the future. Some of these are repeats from last year's Christmas Wish List, but some of those I have since achieved, some of those I don't really feel like I want anymore, and some newer items have jumped on board! 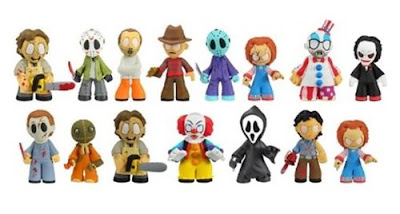 And these are just the miniatures! I think the only MUST-have out of this set is Sam from Trick R' Treat... and speaking of which, I've been keeping an eye peeled at Toys R' Us for any of the Funko POP Horror figures. Again, I'm mostly looking forward to Sam...

But I certainly won't turn my nose up at Ash, Daryl Dixon, or Michael Myers either.

9. ANY vintage Madballs stuff... but especially: 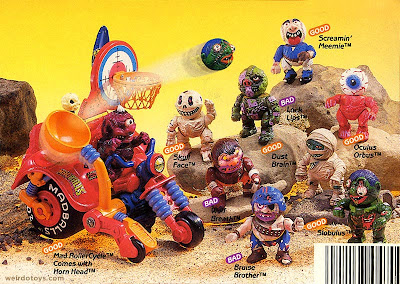 The Madball Roller-Cycle with action figures! I've seen a handful of these on eBay, abut I don't think I'll ever really pull the trigger unless I've got absolutely nothing else I'm looking for at the time. It tends to be pricey, and once I get the cycle I will NEED to get the action figures to go along with it.

I also seriously need to get more of the actual Madballs back in my possesion. I miss these.

I recently snagged a super-cheap copy of Palladium's "Teenage Mutant Ninja Turtles and Other Strangeness" from a secondary seller on Amazon. I've picked up similarly cheap copies of a bunch of Ravenloft source books in the past year. There's a stack of Vampire: The Masquerade books that I'll be featuring on here soon that I found at Goodwill... But I still want MORE. I was a role-playing game collector as a teenager. I only got to play a handful of times in my entire gaming career... but I collected the books like a fiend. And I loved almost all of them. White Wolf, TSR, Palladium, and even a handful of the smaller publishers who tried desperately to survive by publishing supplements for those systems.

I'd love to get my hands on a Planescape Boxed set: 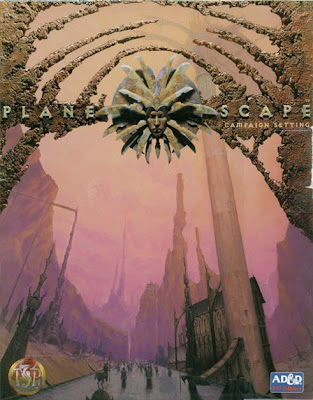 Along with a BUNCH of old stuff I had back then.

Toodee from the Mega Bloks Yo Gabba Gabba one of my absolute HOLY GRAIL items... and I refuse to pay almost 70 dollars for her. I like the design of the characters, and I especially like the Mega Bloks characters. I have everyone but Toodee now... and I even have a Funko POP! DJ Lance Rock to tower over them all. Toodee... come home to me. I don't even want the blocks in the set!!! I just want the figure!!!

And I wouldn't turn down a nice Battle-Cat either:

This one really shouldn't be a huge surprise. I'm a fan of sugary cereal mascots. I genuinely believe that a series of pvc miniature collectibles of all the various different cereal characters from my childhood would make a KILLING. I'm always on the look-out for any food mascot toys, but especially cereal.

I want ALL of these. It seems like they just never made it up to my neck of the woods in Maine.

I squarely place the blame on Shawn Robare of Branded in the 80's for this one... and on The Trash Man over at Pop Pop! It's Trash Culture for leading me down this road. There was a time as a lad when Garbage Pail Kids were my LIFE. I mean that in as literal a way as I possibly can without actually inferring that I would have died without them... And now I'd really like to get them back. Well... not mine obviously. I'd like to get a set of someone else's I guess.

I'd actually love to get m hands on almost all of the mini-figure lines I collected as a kid: Battle Beasts, Army Ants, Monster in My Pocket, Garbage Pail Kids Cheap Toys, etc. etc...

But none more than these little guys: 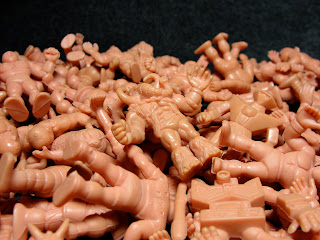 And between a handful of online friends who have donated a pile of them to me, and my own original handful that I salvaged from childhood... I'm off to a good start.

Mostly Real Ghostbusters, TMNT, and MotU toys. But also Thundercats, GI Joe when I find them cheap, Toy Biz X-Men, and old Star Wars figures. But mainly an assortment as random as the one I owned as a kid, spanning whatever toys just happened to catch my eye whenever. Especially these guys (and gals):

Well... that's it for me kiddos! Not a very Halloween-y post I suppose... but when the League calls, the League calls... (and since I didn't answer the call last week, I really HAD to this week... y'know?)

Let's see what some of the other members of the League want:

- Thirtyish Year Old Boy wants to be wowed and wooed by the hunt.

- Nerd Out With Me wants LEGO and a Hoverboard!!!

I'll be back tomorrow with Day 2 of my Halloween Countdown, and maybe... just maybe... there'll be some Gruesome Goodwill Goodies involved!!! (Or not. Who knows? I'm fickle.) Until then, Happy Haunting!
Posted by Derek Ash at 8:32 PM