This was actually supposed to be my post for last week's League of Extraordinary Bloggers photo challenge, but then I got horribly sick and we put off carving pumpkins until this week and boo-hoo I missed the deadline. But here we go anyway. I will say it's pretty unusual for my family to carve Jack O' Lanterns so close to Halloween. We usually have them up a week in advance at the very latest. 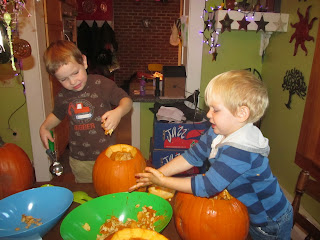 First up here is a handful of shots of my boys cleaning out their pumpkins. My older son (on the left) kept announcing how he has "gotten used to pumpkin guts" and was very excited he could do this task without dry-heaving this year. 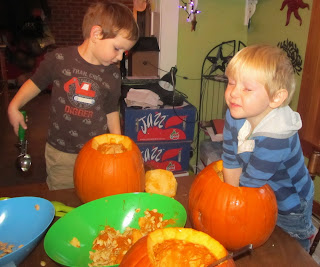 My wife and daughter are both tired and sick with what I've got, so I didn't really get to man pictures of them worthy of the internet. Luckily these two kids were cute enough for the five of us. 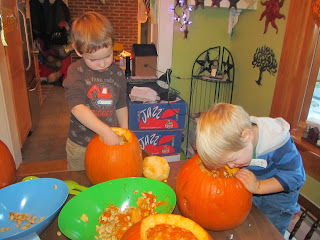 What's he looking at in there? 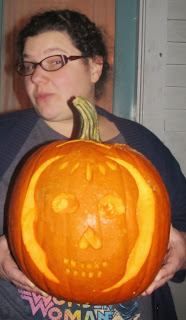 My wife's obsession is with Sugar Skulls this year, and so she designed her Jack O' Lantern accordingly. She also made these for some friends: 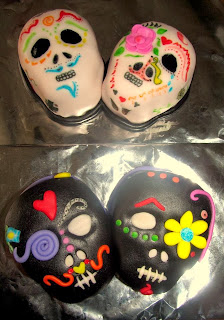 So from left to right: My pumpkin, just sort of a generic Jack of all Jack O' Lanterns. Then m youngest son's, which is meant to look a little like Jack Skellington, but mostly just a "pooky garry keleton" (spooky scary skeleton) which he did not carve himself, but gave very specific instructions in broken toddler English. Then there's my wife's sugar skull pumpkin again. Really love how hers came out. 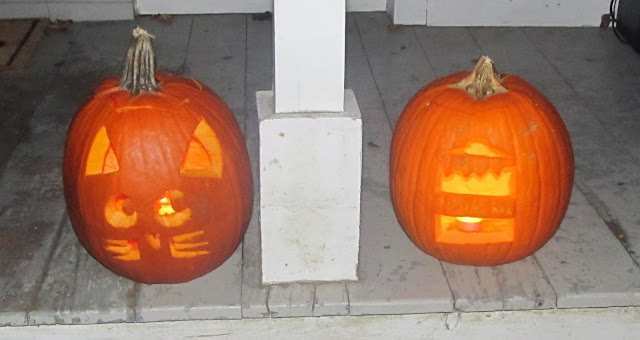 Next up we have my daughter's cat pumpkin and my middle son's "Trash Pack" Jack O' Lantern. (He's ALL about the Trash Pack this year, as you'll see when I post pictures of costumes). That is meant to be a trash can with ooze dripping from the lid, and the words "Trash Pack" etched in the front (that part's hard to see). 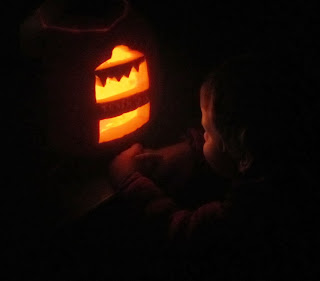 In one of my favorite pictures of '13, here he is admiring his Jack O' Lantern (Mom helped him with the carving, but they discussed the design ahead of time). 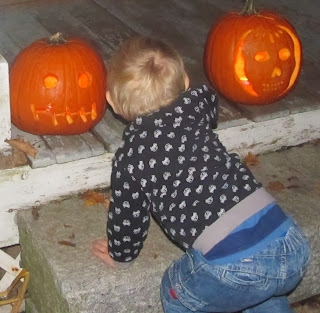 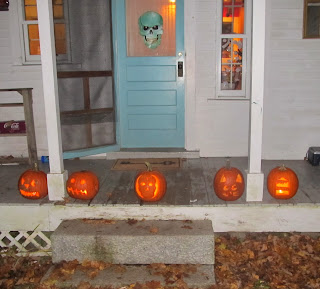 And finally, the whole effect with good ol' Skully up in the window, overlooking the Jack O' Lanterns and the crunchy Fall leaves. Perfect.

That's it for me tonight kids! I'll be back soon with some Groaning Goodwill Goodies! Until then, Happy Haunting!
Posted by Derek Ash at 5:30 PM