About a week and a half ago I was in the Brewer, ME Goodwill and found something I have been wanting to buy for YEARS: 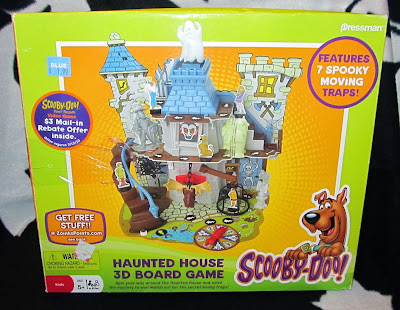 The Scooby-Doo Haunted House 3D Board Game!!! Ever since I started to collect Scooby-Doo Mystery Mates (Scooby-Doo themed mini-figures in the same vein as Hasbro's Super Hero Squad or Mattel's Toy Story Buddies) I have wanted to buy this game. Not to play, but to use as a display for all my Mates!!! 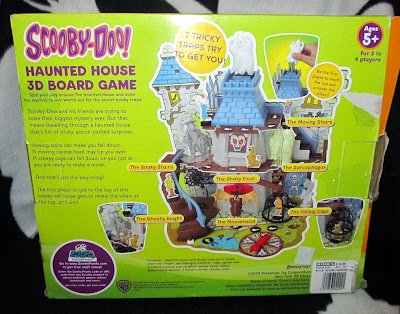 Thing is, the game retails at Toys R' Us for about 20 bucks. And I've just never really wanted to pull the trigger on it for that price. Especially since most of it looks like it's constructed from cardboard. But wouldn't you know it? I found a copy at Goodwill for 1.99!!! I couldn't believe my eyes! And even then, I assumed I would get it home only to find most-to-all of the pieces missing. 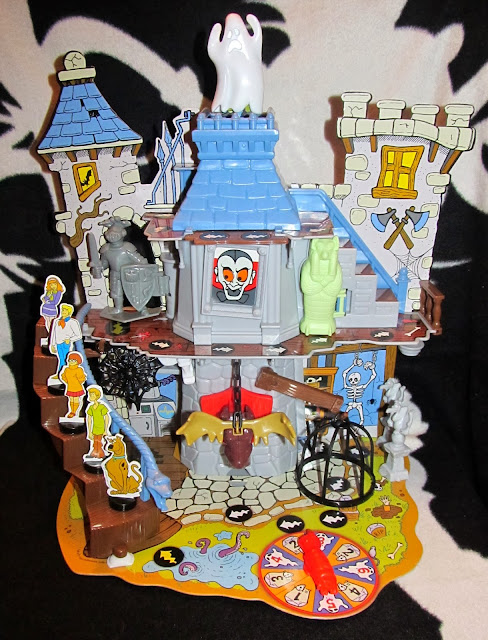 But they were all there! Everything you see here is everything that was supposed to be here! The instructions were in there too! There's a lot of fantastic parts to this game and they all do something to trap, trip-up, or tumble players moving around the board. You spin the severed arm there on the front of the board and then move the number of spaces it lands on. If the space has a gravestone, fine, just move that number. But if the space has a ghost? Look out! You then press the ghost on the top of the game (who is the "villain" the gang is there to unmask) and it sets into motion some of the booby-traps all over the game. It's a different set of traps each time. 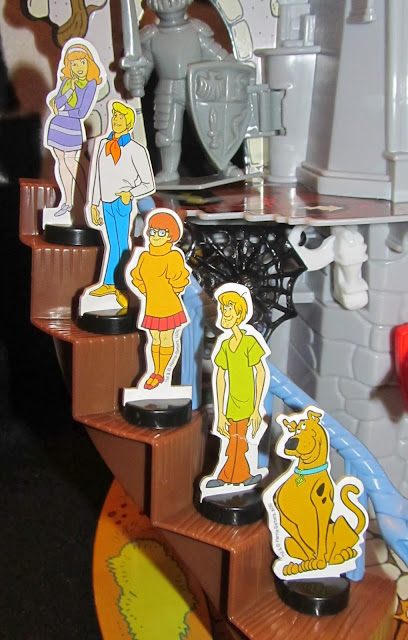 All of the Scooby-Gang pawns were in there too, and they were really the only thing I can complain of being damaged. Some of them look like they've been bent in the middle and creased. But don't they look swell? 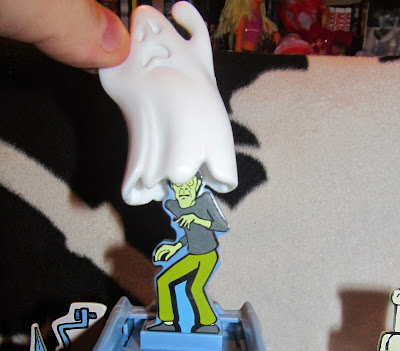 The winner is the first player to reach the roof of the house and unmask the villain. Here he is. Oh man! Old Mr. McCreedy's son! The one they kept locked up in the root cellar and electrocuted when he made noise! HE's the one who keeps scaring people away from the old estate so he can find the pirate gold stashed in the... well you get the joke and I want to stop writing it now. 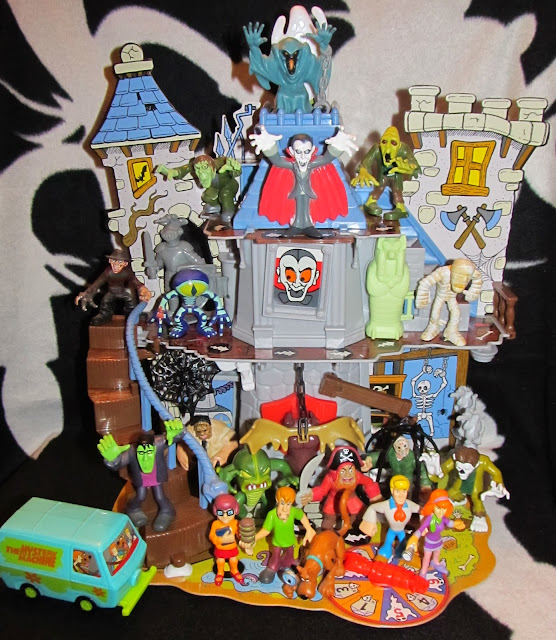 So then I decided to pile on all of my Mystery Mates to see how they looked... and quite frankly this was the only part of the purchase I regretted. This doesn't work as a display for these mini-figs at all. This discovery just made me that much more thankful that I never paid full-price for it at TRU... but now I'm glad I got it just because it's an awesome game!!! I have it out on display in the cave surrounded by Halloween PEZ dispensers just to celebrate the season, but I'll be dragging it out to play with my kids soon enough.

Well, that's it for tonight! I'll be back soon with more Groovy-Coolsville Goodwill Goodies! Until then, Happy Haunting!

Be sure to check out all of the great blogs participating in this year's Halloween Countdown! You can do so by clicking this link, or clicking on the Cryptkeeper 2013 banner on the sidebar to the right! Also, check out the "Blog-O-Ween" Halloween Blog collective, again by following this link, or through the badge on the sidebar! Thanks!
Posted by Derek Ash at 6:15 PM