What was brewing in Brewer

So I need to just go ahead and tell you about my trip to Brewer, ME a few weeks back already. Things are still crazy at my place, with the moving, and painting, and trying to get everything settled for three kids, but I need to just sit down and do it already. If I keep teasing it, you guys are going to think there was some miraculous discovery that cured cancer in that store... and believe me, there wasn't. There were, again, a handful of items that I found that were pretty cool, but that I am saving for my countdown to Halloween come October. But that only accounts for like... three things.

So... I'll kick it off with some books, and I'll move into the toys. 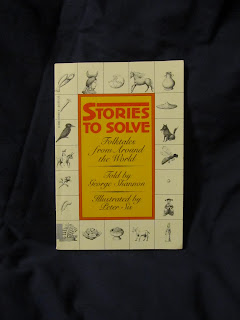 This was a neat little book of fable/riddles to read and try to figure out. I'm a sucker for logic puzzles, and a sucker for folktales and mythology... so this was a no-brainer. Probably the least exciting thing I picked up, depending on your interests. Got this for .99 cents.

I surprised myself by buying 5 Young Indiana Jones books. I think I was just excited by the fact that so many of them were there, it was almost an instant collection. I got books 1, 5, 6, 7, and 8.

I'm usually weird about the purity of the franchises I like, and I was never a huge follower of the Young Indiana Jones concept, on TV, in comics, or in this format. But honestly, now I just love Indiana Jones, and want to explore the expanded universe. In this case I'm honestly just looking for some fun, adventure-packed young-reader chapter books for when my boys get older. I can think of worse gateway books to introduce them to the world of kick-ass adventure stories.


William McKay and Les Martin are the authors of the five books (published by Random House) that I picked up. They range in topics from Gypsies to Ghosts, and look like they'll thrill some boys hungry for adventure. I paid .99 cents apiece for these. 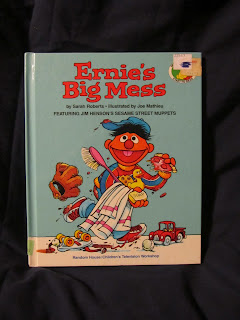 So on this same day I stopped in at the Bangor Goodwill, and found the book about Oscar's Rotten Birthday and as I mentioned in that post, I love me some vintage Sesame Street books. I love the artwork, I love the look and feel and tone of the stories. So seeing a second book from the Sesame Street Start-To-Read series from Random House was pretty neat. This story is a little strange in that Bert yells at Ernie, Ernie's feelings get hurt, and Ernie runs away from home and literally ends up sleeping in the street at one point. It gets a little dark folks. I still like the book, and gladly added it to my vintage Sesame Street books for .99 cents. 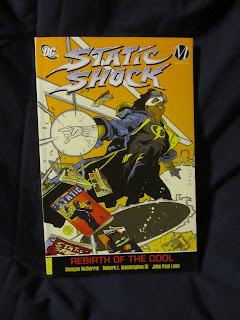 Finally, I found this Static Shock TPB, which I was VERY excited about! First of all, I have been meaning to read Static Shock for a very long time now, and have just never gotten around to it. This trade was in extremely good (I mean pristine) condition, and it collects all of the early stories together in one place, making it a one-stop-shop for me to catch up on all I need to know about the character and series. I can't wait. Second of all, there was a competing Geek moving in on the kids book section who had already scooped up what I thought was every available TPB in the place. He kept looking in my basket and asking questions about the stuff I'd found, and looking at a couple of things longingly. He even asked if he could look at something (one of my saved-for-Halloween items) and when I hesitated, told me to relax, he wasn't "going to take it or anything". So when I went back to the children's book section, it was a half-hearted look. I found the Indy books, and then this TPB, which my arch-nemesis-Geek had missed. I triumphantly paid 1.99 for this hard-fought beauty.

This guy I knew NOTHING about. I just liked the look of him, and honestly, I was inspired to pick this up for .99 cents because of ShezCrafti's Top 10 Favorite Cartoon Sharks that she posted for Shark week back in mid August. I decided that whoever this guy is, he's a cool shark toy. Turns out, after doing some research, that he is Bull Sharkowski, from the Cartoon Network show "My Gym Patrner's A Monkey", which I never watched. It seems it was to my loss, because after checking out this Youtube video:

I think it might have suited my sense of humor. I love how the shark's "headphones" are not headphones at all, but a water-breathing apparatus. It gives him that Darth Vader element in the most ridiculous and stupid way possible. This guy is Biff, Vader, and Jaws wrapped up in one. Anyway, once I got researching the toy itself, I found out it was part of a Happy Meal series that I already had a couple of items from, and this made me really happy. I'll actually do a post all about them some other time, so you can see why this happiness was warranted, exactly. 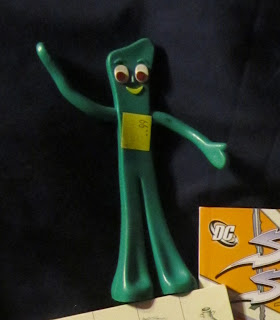 Next up we have a bendy Gumbi figure. I don't have a lot to say about him honestly. I like Gumbi as an iconic character in animation. He was .99 cents. I like that you can still go into some toy stores and find blister-packed bendy Gumbi figures to this day. 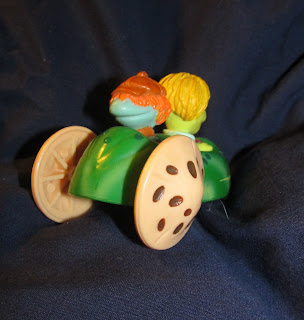 Now it's time to haul out the big guns. This is a Cucumber car with Wembley and Boober from Fraggle Rock driving it! This was put out in 1988, and very surprising to see hiding in the back of the toy shelves. This was probably the one item I was most excited about finding. I love me some Fraggles. I love anything even remotely Jim Henson related, to be honest. 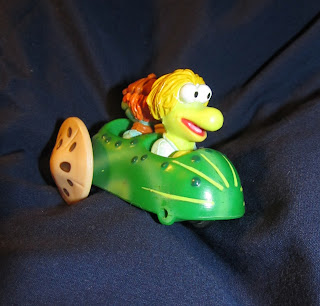 I also love Happy Meal toys. So win-win. I think of the four cars from this set I could have found, this is the one I would have wanted to find as well. 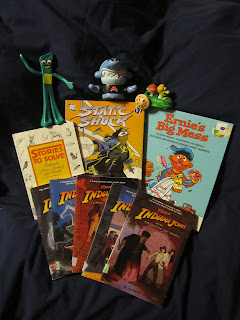 So that's it! That's the haul from Brewer! I know I told you nothing too majorly fantast-- wait up! What's this final item that my daughter brought up to me and gave me with a smile? One of the items that the other Geek hunting through the store looked at and wanted for his very own? Why... just this huge-ass Star Scream toy. 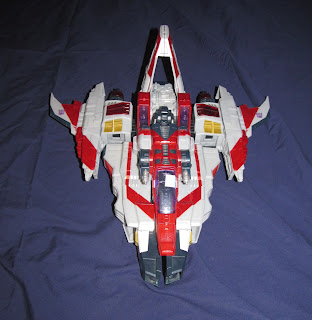 He's missing a couple of pieces (nothing I really mind besides the blaster from his left arm) and accessories, but for the most part he looks BADASS on my shelf (and I now know that he's not transformed properly above, since I've seen pictures online, but it's too late for reshoots because... packed.). I believe this is from the 2005 Legends of Cybertron line. 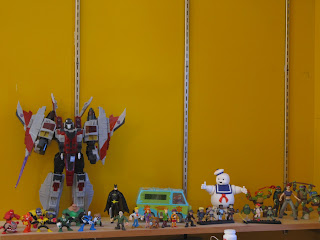 Here he is in robot form with my fat-face Batman and a bunch of other toys to show some sense of scale. I looooove him. I don't care what condition he's in. He's bee-yoo-tee-full. I paid 1.99 for this hombre!!! I was ridiculously happy with this purchase. (All of these toys are in storage now... SOB!)

So there's my trip to the Brewer, ME Goodwill. It wasn't a religious experience, but any shopping trip that ends with Fraggles and a Starscream the size of a toddler is a pretty good one in my book.

I'll be back soon with some more Goodwill goodies, so until then... Happy Hunting!