Day 3: My One Goodwill Online Purchase

I've been sitting on this post, and wanting to do it since I started the blog. How I managed to make myself wait for the Halloween Countdown, I'll never know. But here we go! 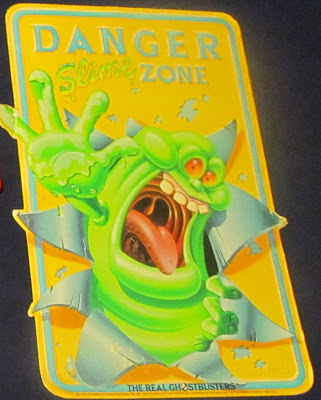 I have only ever made one purchase on the online Goodwill site. It is very similar to eBay in a lot of crummy ways, but the stuff on there feels like more of a treasure hunt because it's usually all posted in lots, and often the folks posting the lots have no idea what they've got their hands on. The shipping costs are ridiculous more often than not, but in this case I was willing to foot the bill as long as I could get the whole lot for a reasonable price. And... it turns out... I sort of did. I ended up spending just under 50 dollars for the following items: The image above should be a bit of a hint as to what this lot included. It was pretty great.

And I can think of few franchises from my childhood that would be more appropriate to feature in a Halloween themed post than: The Real Ghostbusters!

I saw a Real Ghostbusters toy lot on ShopGoodwill.com and fell immediately in love. I HAD to have it. And I was willing to duke it out to win it. 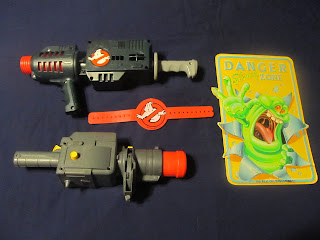 First off, it included these items. a wrist-band, the ghost projector/Ghostzapper, the Ghostpopper (sans poppers), and a Danger Slime Zone poster (there was an iron on patch too, but I couldn't find it for these pictures). The projector still works, though it only has one wheel and no decals. The popper looks awesome, but has no ammo. 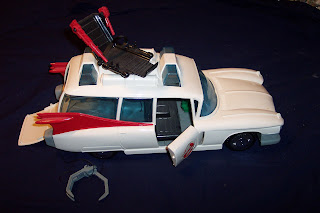 Next, the Ecto-1. This thing is in great condition. The biggest complaint is the sticker on the rear window is peeling off. It still has the ghost-grabbing claw, and the roof mounted seat with guns. It's bee-yoo-tee-full. This was one of my favorite vehicles as a kid. I used it with everyone. My Ecto-1 often traveled to space, through time, and was packed full of every single hero I could fit inside. It's only real competition in my heart was my Madball Rollercycle. And the G.I.Joe Mobile Command Center... but that bitch was a base not really a vehicle. Nope... Ecto-1 was my babe. 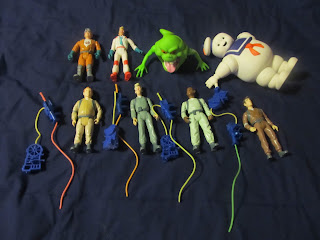 The last part of the lot included all you see above. The four original 'busters, WITH proton packs!!! (No mini-ghosts included... oh well) And two of the fright-features figures... and Egon has his tie!!! This is the one feature of this figure that ALWAYS seems to break off. Every screaming Egon figure on eBay seemed to have only a stump of blue tie. Another great feature? Slimer has ALL of his fingers intact! It seems like this is another of those things that seems to break off across the board. And rememberm this was not something I bought from an obsessive fan-boy on eBay. These were toys donated to Goodwill. And there is possibly one of my favorite toys of all time, Stay Puft! He's beautiful too.

That's all I got in the lot. I got these guys about a year and a half ago, and I haven't had one regret paying as much as I did for the lot. But that is NOT where my Real Ghostbusters collection ends. 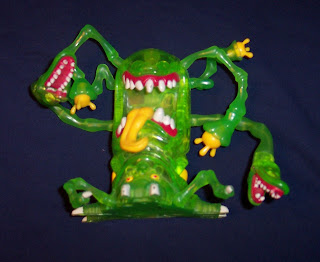 This is a toy I found at a yard-sale for .25 cents, even before I bought the lot from shopgoodwill above. I didn't recognize it, and I knew it had to be missing pieces, but I loved it. Come to find out later, it's from the Ghostbusters Extreme line, which was based on the cartoon sequel series to the Real Ghostbusters. I've never seen it, but I display this guy next to my other Ghostbusters figures with pride. 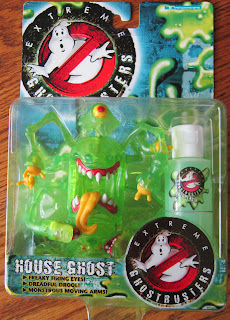 Here's what he would look like in his package. Notice what mine is missing? I'll give you a hint: 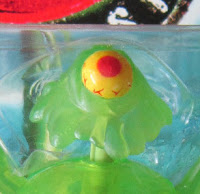 It really irks me that I don't have this eye. Had I known what was missing all that time ago, I would have dug around to see if that eye was floating around in one of the boxes at the yard sale.

Here's the rest of my collection:

All the mini-mates pictured here are from Toys R' Us, and all of the vintage figures not from the Shop Goodwill lot are from eBay. Back when I was young and foolish and could still afford eBay. Granny Gross was one of my all time favorite action figures as a kid. She was one of Hordaks high-ranking henchmen when it came to fighting the heroes. Howling Wolfman up there next to her was another huge favorite. 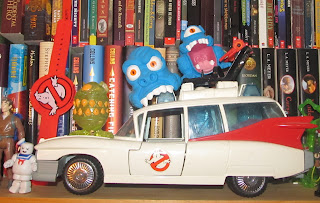 The yellow guy standing on the hood was from the same yard sale as the green Ghostbusters Extreme ghost. I recognized him at the time, even though I never owned him as a kid. Also .25 cents. The two water-squirting ghosts up there are from eBay.

I had to round out the rest of my Fright-features Ghostbusters because they were my favorites as a kid, even over the basic figures. That Janeane in the pnk jumpsuit was one of my lead female figures. I didn't have a lot of girl figures, so she and April O'Neil and Teela were the chicks along for every adventure.

Here is the entire collection in all of its glory. Yeah... getting my books down from ANY shelf is a real challenge.

I really loved the Real Ghostbusters as a kid. One of my favorite shows hands down. I had the proton pack, and almost a literal ton of the toys. So getting these and having them to display on my shelf feels really good. And sharing them with all of you as a part of my Halloween countdown feels even better!

Well, I'll be back soon with some more Ghoulish Goodwill Goodies! Until then, Happy Haunting!