So, it's the penultimate post of my Halloween countdown, and I am just exhausted. Mentally, spiritually, physically, literally, figuratively, financially, socially, emotionally, and any other -ly... exhausted.

So things are going out with a bit more of a whimper than a bang. I'm featuring some horror DVDs that I've bought at Goodwill in the recent months. I paid 2.99 for each of them, and I am EXTREMELY satisfied with them. So sit back, pop some popcorn, and get ready to watch: a poorly written review by a barely coherent blogger about some second hand horror movies he bought at Goodwill. Good times. 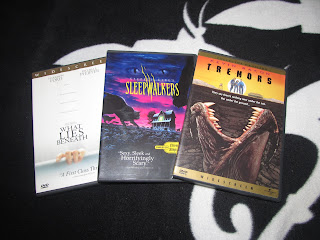 Read more after the jump... if you dare! 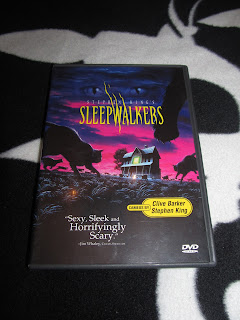 First of the lot is "Sleepwalkers" from 1992. This one I'm conflicted on. It is both a terrible film and a wonderful one in equal measures. The writing is not great. The story however, is an interesting idea. A mother/son duo of shape-shifting creatures who drift from place to place, feeding on youth and innocence. It's just executed poorly in this film. It was written by Steve King, and actually has cameos by both him and Clive Barker in the film. Hey... speaking of Clive Barker, I have this awesome book by him: 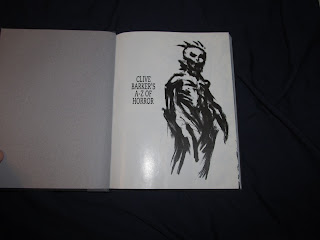 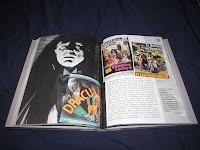 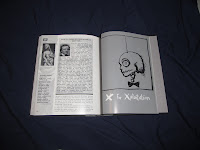 Clive Barker's A-Z Of Horror is an excellent if weird little reference guide to 26 different categories (one for every letter of the alphabet...) of HORROR. It is an amazing book, and I'm still finding new things the marvel at every time I flip through. This one set me back 2.99. Any way... what was I talking about? Oh yeah...

Stephen King's "Sleepwalkers" Everything from the special effects to the acting strive to tear this film down... but there are these moments of sheer excellence that shine through and save about half of the film. The cemetery scene, the weird, atmospheric scenes in the movie theater lobby, the strange behavior of the neighborhood cats... and the performance of Alice Krige absolutely saves it all. She is a creepy, terrifying, psychopathic, incestuous, raging storm of calm, deadly menace. And her one-handed catch-and-snap of an attacking cat is so badass it makes me cheer every time I see it. This is a movie I wouldn't have paid more than three dollars for, believe me... so it's good I found it at Goodwill. 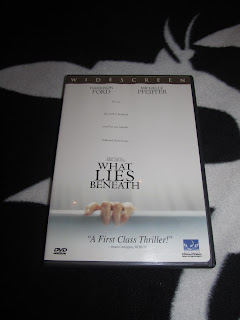 I have a certain HUGE affection for the ghost story trend started by "The Sixth Sense", and including "The Others", "Stir of Echoes", and this movie, around the change of the millennium. Speaking of The Sixth sense... did you know this was a thing? 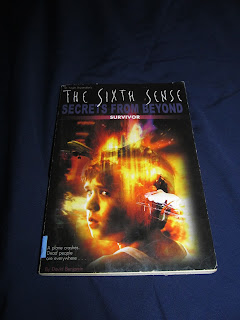 This is a Sixth Sense YA series of books. Yes. Soak that in. The same movie that included a kid with the back of his head blown off and a poisoned girl ghost vomiting in a tent... has its own not just kid's book... but kid's book series. I couldn't NOT buy this for .99 cents.

Anyway... back to "What Lies Beneath" I love this film. It has double-crosses, unexpected revelations, red herrings, a genuinely mysterious mystery, and a ghost with vengeance in its heart. The acting is excellent, and any cast that includes Catwoman and Indiana Jones just wins at movies. Love this movie.

You know what else I love? Awkwardly shoe-horning everything I was planning to blog about this month but didn't have time to into a post seemingly about three DVDs just to see if anyone is paying attention. Like... 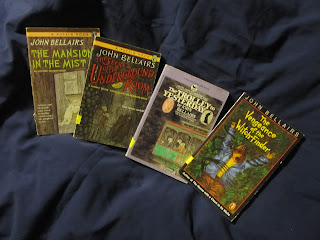 Books by John Bellairs that I've picked up at Goodwill for .99 cents apiece! The Mansion in the Mist, The Secret of the Underground Room, The Trolley to Yesterday, and The Vengeance of the Witch-Finder. John Bellairs wrote some of the best spooky books from my childhood. The House With a Clock in its Walls and The Spell of the Sorcerer's Skull are two of my absolute favorite books by John Bellairs, and since I am now a full grown adult, I've made it my mission to track down as many John Bellairs books as I can. I even sent an extra one I found out to my Great Pumpkin Patcher this year The Mummy, the Will, and the Crypt (to go along with their mummy theme). Okay... back to the DVDs! 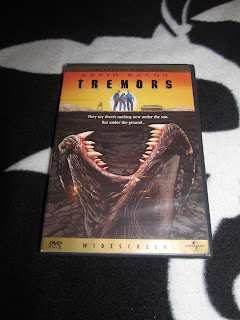 "Tremors" is one of the absolute best examples of 80's comedy horror. I LOVE this movie. And I love it even more that I was able to find it as a single movie, and not as a part of some sort of horrible "attack pack" with twenty other sequels.

Know what else will give you tremors? A picture of two toy Godzillas embracing. One of which belonged to my brother in law when he was a child (the purple one) the other I bought at Goodwill for .99 cents (the green one).

What was I blogging about again? Oh yeah... Kevin Bacon in the amazing 80's horror comedy Tremors. I love this movie. Everything from the desert setting to the hilarious survivalist gun enthusiasts played by Reba McEntire and Michael Gross. The beasts themselves were incredible to behold, and had a great M.O. 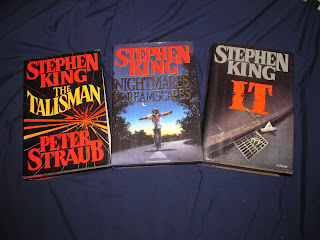 Speaking of M.O.'s... Stephen King books? Dammit I should have put this one in with Sleepwalkers!!! It's too late and I'm too tired. These are three of my ALL TIME FAVORITE Stephen King books (yeah, I know, one of them is only half Stephen King, but I don't care. It's still one of my favorites by him... and someone else) The Talisman is equal parts adventure, and horror. ANY short story collection by King is pure gold... and IT is the single best book by King ever. EVER. I picked up these three burglar killing tomes for 3.99 apiece. The most I've ever spent on books at Goodwill. But they were huge and worth it.

Tremors. Good movie. It is amazing. I feel guilty for chopping up its review with hugging Godzillas and Stephen King books.

It really is one of my favorite monster flicks from the 80's. If you haven't seen it yet, I feel sad for you.


You know who I feel sad for now? Me. I'm tired and it's Halloween Eve... and I'm tired. Hurricane Sandy didn't hit us the way we were scared it would... and I'm thankful for that.

Now I'm off to bed, and pleasant October dreams for one more full night. Halloween is tomorrow. I'll post pictures when it's all said and done... but probably not tomorrow. Tomorrow I will not be posting at all. I'm taking Halloween off. I had a real blast doing this countdown, but it was a lot of hard work, and I'm feeling burned out and glad it's done. I hope you guys enjoyed it as much as I did. That would make it all worth it. I'm totally doing it again next year either way.

Happy Halloween you guys! I'll be back soon with more Ghoulsh Goodwill Goodies soon enough. Until then... Happy Haunting!
Posted by Derek Ash at 7:08 PM