Those of you who actually follow this blog on any sort of semi-regular basis (and I like to pretend THOUSANDS of you do...) will probably notice that I don't usually give in-depth reviews of the books I purchase, and with good reason: I usually haven't read them yet.

But for my Countdown to Halloween I wanted the chance to actually speak with some sort of knowledge on a handful of the items I would be sharing with you. And with Ray Bradbury's recent and untimely death back in June (didn't seem that long ago honestly) I felt something I could speak on with some intelligence would be the October-y writings of one of our most beloved authors.


So today I'll be talking about The October Country, The Halloween Tree, Something Wicked This Way Comes, and From the Dust Returned. The first three books I bought at Goodwill for .99 cents apiece, the last one I bought from a place called the Big Chicken Barn, an antiques mall and used book store in Ellsworth, ME and I think I paid 2 dollars or so for it (can't recall). 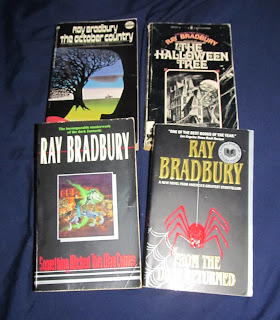 See more about these four books after the jump! 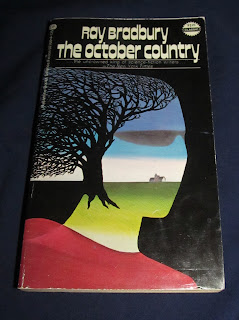 First up, I'll tackle The October Country, which if you recall from my second post on this blog, was a bit of a Holy Grail for me for a while. I have the most to say about this one, so get comfortable, or start scrolling. I had read somewhere about a creation of Ray Bradbury's called "The Family" which was his iteration of the Addams Family, Munsters, Uggly Family style trope. That the stories the characters originated from were from a book called The October Country, and then continued in From the Dust Returned.

But The October Country was out of print. I desperately wanted to read it. Neil Gaiman's short story "October in the Chair" was rumored to be a sort of homage to this book as well. I toyed with the idea of buying it online through eBay, but I was a pretty dedicated Goodwill Geek at that point (just without the blog) and so I made it my mission to try to find it second-hand and cheap before I paid an arm and a leg for it.

And then... one day... I just... found it. At Goodwill. For .99 cents. And all was right in the world. And let me tell you, I was not disappointed. There are some real gems of storytelling in here. There's not a ton of gore (though there is a surprising amount of it at times) and some of the stories are more atmospheric than anything... there is a real feeling of Halloween in the book that is never expressed overtly in any of the stories (except maybe the story "Homecoming"). What's really interesting is how Bradbury manages to get under the skin of the reader. In stories like "The Next in Line" and "Skeleton" Bradbury lets us boil in a stew of the characters' paranoia and neurosis that is more potent itself than the climax of either story. There's some great descriptive, almost poetic passages in this book as well. Stuff I want to write or draw and use as Halloween decorations. For example:

"A skeleton. one of those jointed, snowy, hard things, one of those foul, dry, brittle, gouge-eyed, skull-faced, shake-fingered, rattling things that sway from neck chains in abandoned webbed closets, one of those things found on the desert all long and scattered like dice!"

It's an incredible collection, and a great read for anyone in the mood for a set of mostly mild, not quite "horror" stories that set a nice orange and black tone. 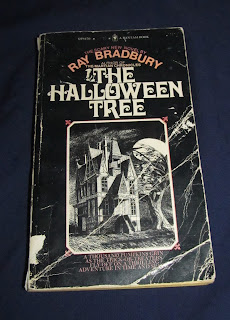 The Halloween Tree is a perennial classic of October. It's a story for young adults about a group of boys who go out Trick or Treating, and end up on a bizarre quest to see if their friend Pipkin will live or die. It explores various ancient cultures and the roots that Halloween draws from them: The Celts, the Mexican Day of the Dead, the ancient Egyptians and more. It's a little flowery in its text, to the point where I think young readers nowadays would actually be a little bored... but for those of us who truly love the spirit of Halloween and all it represents, all it symbolizes, and all it draws from... this book is a must read. Follow along with Carapace Clavicle Moundshroud and the kids as they explore the ghosts of Halloween past. 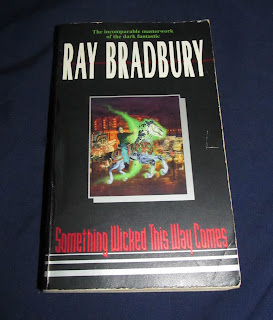 Something Wicked This Way Comes is a story that begins on October 27th, stars a supernatural carnival of darkness, and features a wicked witch, an evil magician, and a carousel with magic powers. Innocence is corrupted, children are tempted, and there is only one thing that will save them all. If you have not read this book, you should. It's another great Halloween-season read, and honestly, one of the classics that any Geek worth his or her stripes should have read by now anyway.

From the Dust Returned is really a continuation and a melting pot for a handful of Bradbury's stories. It actually completely contains the stories "Homecoming" and "Uncle Einar" from The October Country. It details all the comings and goings of the Elliot Family, full of demons, spirits, monsters, immortals, psychics, and other odd characters. It also stars the painfully human Timothy, adopted by the family after being left on their doorstep in a basket as a baby. He so wants to be like this macabre and powerful group that surrounds him, but he is cursed by his mortality to be forever apart. Now, I am currently halfway through this book, so I can't go into great detail about how it ends, or the over-arching plot... but the atmosphere of this book is great, and the characters will delight any fan of the Addams Family. You don't need to have read any other Ray Bradbury stories to "get" this one, as most of the stories that preface it are written directly into the text... so it's kind of a novel-length revision of a handful of Bradbury stories.  Its another great, Halloween-y story that pulls the winds of October in through the window and over your shoulder as you read.

I fully recommend all four of these books to any true fan of October, Halloween, or spooky stories in general.

That's it for today, but I'll be back soon with more Ghoulish Goodwill Goodies. Until then, Happy Haunting!

* I'm paraphrasing a comment made by one of the characters from "Homecoming" and From the Dust Returned when she promises the mortal boy, Timothy that they will love him, and care for him, even after he has died. It's a actually a very touching, if darkly morbid sentiment.
Posted by Derek Ash at 2:20 PM

Email ThisBlogThis!Share to TwitterShare to FacebookShare to Pinterest
Labels: From the Dust Returned, Halloween, October, Ray Bradbury, Something Wicked This Way Comes, The Halloween Tree, The October Country