Another semi-quick post tonight about some Halloween-ish short-story collections, some of which I've picked up recently from Goodwill and some of which I've had for a while, and got elsewhere (I'll point out the ones I did not buy from Goodwill, because most of these, I did). Most of these I picked up because I thought the cover was trippy, or the title was trippier. Some of them I selected simply because they had "classic" stories or writers included. You won't find any "huge" modern names on this list, like Stephen King or Clive Barker... just because I may be saving them for another day. 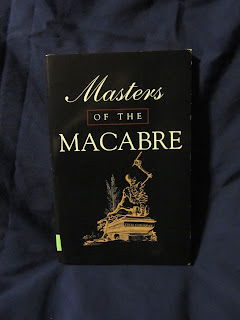 Masters of the Macabre I picked up because it has stories by Washington Irving, Charles Dickens, Edgar Allen Poe, Mark Twain, and Bram Stoker, among others. It's a book of "classic" authors writing ghost stories and the such. And not the ones you'd expect. Washington Irving's story, for instance is not "The Legend of Sleepy Hollow". So many of these stories sounded new to me that I felt safe buying it. I'm not 100% sure that it won't bore me to tears... but whatever. It was .99 cents. 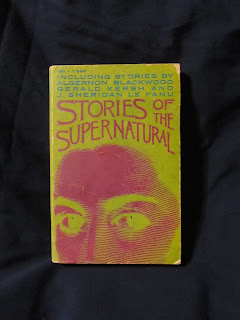 Stories of the Supernatural I totally bought almost solely for the cover. Look at that beautiful bitch. Also it was published in 1967 and the cover price was originally .45 cents. I've never heard of any of the stories or authors in this book. But a story called "The Willows" by Algernon Blackwood is honestly bound to be awesome. Also .99 cents. 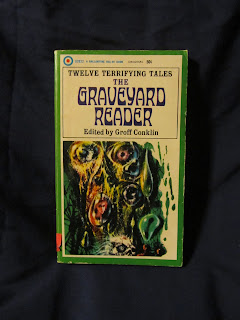 The Graveyard Reader I bought for both the cover AND the title. The Graveyard Reader sounds like a kids book for ghoul, ghost, and zombie kids. This one's from 1965 and was originally .50 cents. This one's got some recognizable names like Ray Bradbury, Ambrose Bierce, and H.P. Lovecraft. The final story in the book is "The Graveyard Reader" and it was written specifically to be included in the collection. This appears to be some sort of weird collection for students, as it has a note to Teachers and Parents in the front, and notes on student evaluation in the back. Again, .99 cents. 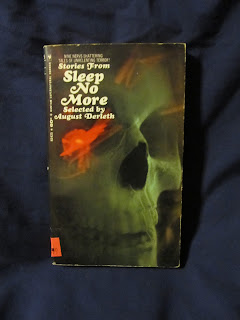 How batsh-- insane are the combined might of the cover and title for Stories From Sleep No More? The cover describes these as "Nine nerve-shattering tales of unrelenting terror!" Here we find another tale by the mysterious Algernon Blackwood, "The Occupant of the Room". Also, "Thus I Refute Beelzy" by John Collier. Consider my nerves shattered. This is another one from 1967, and it originally cost .60 cents. It has since appreciated to .99 cents. Because that's what I paid. 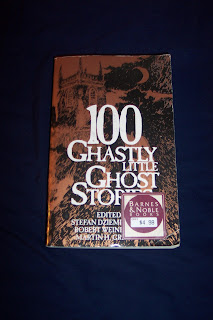 This one looks fun. The back cover 100 Ghastly Little Ghost Stories warns: "Not only good things, but sometimes fear comes in small packages; or, in this case, short packages." If I had a nickel for every time someone told me fear came in short packages... I could afford to not have such a short package. HA-HA-HA! I have ten minutes left to finish this post. Seriously though, this book of short-short horror stories looks pretty promising. It has titles like "The Ghost Child" and "Dark Mummery" and "Attorney for the Damned". I paid 1.99 for this one. 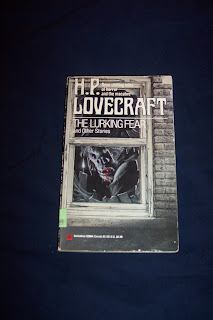 You really can't beat the classics of horror in some cases, and The Lurking Fear and Other Stories by H.P. Lovecraft is a prime example. "The Shadow Over Innsmouth" is in here folks. 'Nuff said. .99 cents. 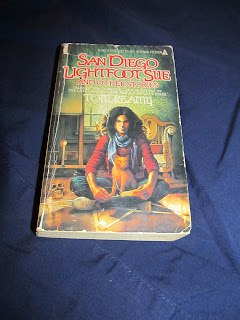 Alright. Things just got serious. This book, San Diego Lightfoot Sue is LITERALLY one of my all-time favorite books. Tom Reamy died before all of his short stories were collected in this book. He passed away with a novel and these short stories to his name... and the world is poorer for it. Inside this book are some truly disturbing, truly beautiful, and truly amazing stories. From the title story, about a witch and her attempts to change herself for love, to "Beyond the Cleft" which tells in almost clinical, or historian-like detail of a small  North Carolina town where the children suddenly and violently turn cannibal. "The Detweiler Boy" is a bizarre hard-boiled detective story with a mutant twist. and "Insects in Amber" is a tale of ghosts, psychics, and how these things are not always what they seem to be. The work is brilliant. The characters are unexpected and unpredictable. The stories never seem to go exactly where you expect them to. And from his writing, it is clear that poverty, sexuality, and the horrors of mundane, everyday life weighed heavily on his mind as he wrote. An excellent read. I don't remember where I got this book, or for how much. But you should seek it out if you can. I think it might have come from the Big Chicken Barn. 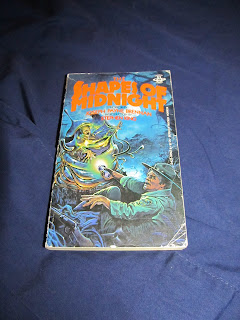 This book, The Shapes of Midnight is a collection by Joseph Payne Brennan, and in some of its best moments, such as stories like "Canavan's Backyard" evoke a strong feel for older era stories like The House on the Borderlands. Brilliant, moody pieces that have the characters, and the reader at times, questioning their sanity. .99 cents. Pretty sure this was another Chicken Barn Purchase. 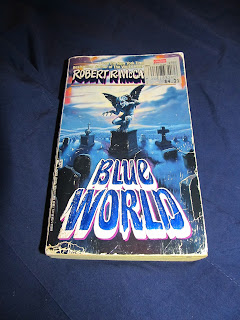 Blue World by Robert R. McCammon is definitely not the best written book on this list, but still a very good read. The title makes it sound more like a collection of stories about sad kittens than the weird stuff that actually goes down. Stories like "He'll Come Knocking at Your Door" and "Yellowjacket Summer" will have you ready for Halloween in no time. This is another one where I've forgotten the place I purchased it from and the price... but if you see it in the wild, it's worth a gander. I mean, look at that awesome gargoyle in that awesome... Blue World on the cover. 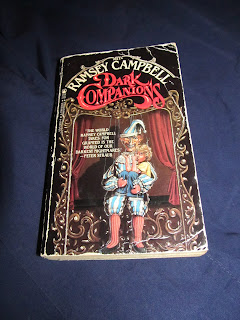 Ramsey Campbell's Dark Companions is another mixed bag where some of the stories just didn't do it for me, but a handful really nailed it perfectly. These stories aspire to bring H.P. Lovecraftian story into the more modern era, and so he explores old, dead places with old dead things lurking in them. Office buildings with pale, slug-like gods living beneath them. Old abandoned buildings you might get lost in and never return from. Dark places and people that stain the mind. I got this one at a yard sale in Sullivan, ME, for a quarter! 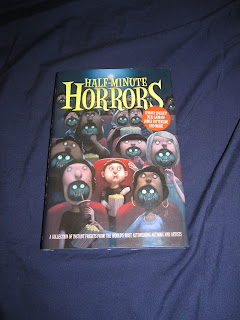 The last book on this list is supposedly for young adults, and the stories all take less that a minute to read... but it caused me the most lost sleep out of any I've read on this list so far. The more famous contributors, like Neil Gaiman and Lemony Snicket are not even the most spine-tingling tales the book has to offer. Its surprising just how disturbed you can be by a single paragraph that tells a whole story about a child being menaced by a monster under the bed, or a day water-skiing at a haunted lake. These stories got under my skin, and worked their way into my brain... which when you have just moved into a new house that makes all kinds of creaky, tappy-clicky noises at night... can make it hard to sleep. Kind of regretting (but not really... this book is EXCELLENT) the 1.99 I paid for this at Goodwill.

So whoah. That was longer than I'd planned. I'm kind of glad it was.

I'll be back soon with more Ghoulish Goodwill Goodies! Until then, Happy Haunting!
Posted by Derek Ash at 9:26 PM