As I've mentioned on several occasions, Goodwill is famous for their bags of little goodies. As October was drawing near, I started keeping my eyes peeled for a grab bag with a genuine Halloween theme (I have other themed grab-bags to come, but none of them contain actual Halloween merchandise like this) in with the Halloween stuff. And guess what! I totally found one. 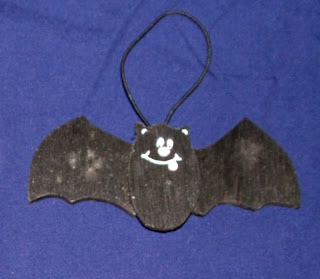 This ridiculous bat is just one of four items I found in this grab bag. It's just the worst. But it's so bad looking I almost like it. I mean... look at that tongue. But because it was my very least favorite item, I used it as the teaser image.
See more after the jump! 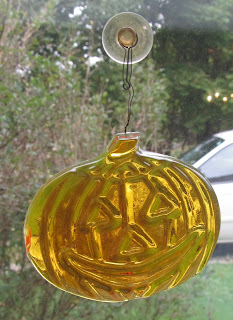 Next up is this clear resin Pumpkin, which isn't really anything special, but rates higher in my regard than the bat. It's a cute little harbinger of the Halloween season, and so I am willing to forgive it for being kind of simple. It came with a suction cup to stick it up in the window, and it's a nice shade of amber/orange. Honestly, I kind of like this item. It's simple, and it's a sunny, cheery reminder that the night of masks is almost upon us. I need to replace the wire holding it up though.That's so post-apocalypse (this is the term I like to use instead of "that's so ghetto"). 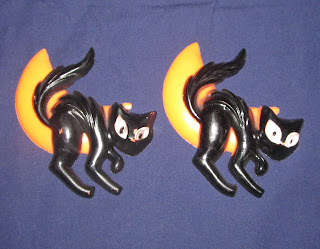 Now I'm into the real reason I bought this grab bag. I don't know what there are. I mean I know they're cats with moons behind them, but I don't know what they ARE. Cake toppers maybe? That's really all I can imagine. They're too big to be the kind of thing that you stick in the top of a cupcake... but they're almost impossible to hang, stick, or display. So I don't know how I'm going to display them... but I will FIND A WAY. These kitties kick so much Halloween ass! I mean look at them! Their faces are almost all eyes, and they look scrawny yet fierce, the way a Halloween cat should. They feel vintage... but there's no date stamp, so they could literally be last years dollar store cast-offs. What I've decided is that I just don't care one way or another. They are cool. I love them. I will display them with pride. 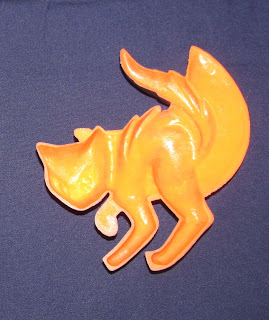 This is what their insides look like. They look almost as cool (if not kind of MORE cool...) from the inside out. They look like fire cats now. I might actually drill some holes in these with a Dremel an hang them. Maybe these are the first four ornaments for some sort of Halloween tree that I didn't know I needed ornaments for yet... 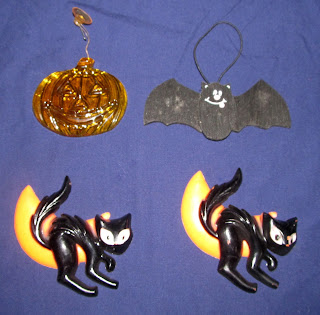 Here are the contents of a .99 cent Goodwill grab-bag, Halloween edition. I know, it's a little sparse compared to some other grab-bags... but I was willing to suck it up a little for the Halloween theme.

Anyway... I'll be back soon with more ghoulish Goodwill goodies! Until then, Happy Haunting!
Posted by Derek Ash at 5:57 AM