Everything is Halloween Edition this month! And so was my payday Friday (..sort of)! So when I went into Goodwill this Friday, my first stop was at the Halloween section, which gave me some great toy and decoration finds right off the bat. Then I cruised toys, found a grab-bag that I can sort of connect to the theme, and then I picked through the books, where 2 out of seven books definitely fit the theme, but the rest I had to... stretch a bit. So get ready... for that. The Arrival is a book that I wanted to buy when I first heard about it. It looks amazing, and because I love graphic novels, this book looked like it would be right up my alley. This tells the story of an immigrant to a bizarre new world filled with creatures, strange landscapes, and sometimes frightening, sometimes enlightening experiences. It is hauntingly and beautifully illustrated, and filled with character, charm, and empathy. I was so excited to find this book at Goodwill for 1.99. This was the one book I really couldn't justify as a Halloween book at all... except that it's got some weird creatures and a weird dream-like feel to it... but otherwise, nah.

I do a better job from here on out tying it all in, I promise. 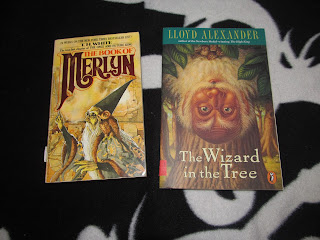 A couple of wizarding books, which I can justify by saying wizards definitely have a presence during Halloween season...? The first one, The Book of Merlyn is "the true last chapter of The Once and Future King" which I will be reading sometime in the near future. I don't want to be stuck not knowing how it REALLY ends. The Wizard in the Tree is a book by Lloyd Alexander... and that's enough to get me to buy it. Alexander is an excellent author, and any of his books I don't have, I make sure I DO have when I see them. Each of these was .99 cents. 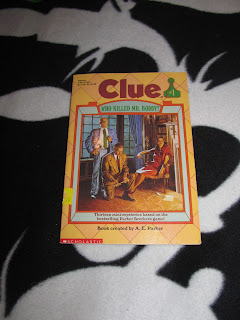 Here is where things really start heating up for Halloween. A collection of 13 short CLUE-themed mystery stories. It is also apparently the first in a SERIES, hence the #1 in the game-piece in the top right-hand corner (a quick check on Amazon reveals no less than 18 books, and possibly more not including the reprints... I just got tired of looking.) It should be interesting to see if these stories are worth reading at all. But I was pretty excited to find this little collection... for my collection. .99 cents for this book. 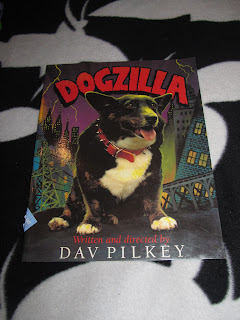 Next up is a new book for the family Halloween Kid's book collection. Dogzilla is a hilarious combination of photographs and painted artwork. It tells the story of a giant (relatively giant) dog who attacks the city of the tiny (relatively tiny) mice. It's your typical giant-whatever-attacks-the-city story, except it's funny, and the mice are ridiculous, and the dog is pretty adorable (if destructive). .99 cents. 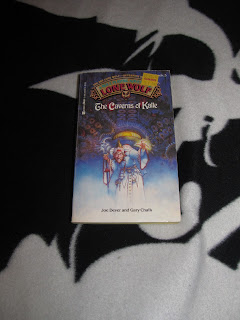 Wrapping up the books portion of the post, we have The Caverns of Kalte, a Role-Playing (choose your own adventure) book from the Lone Wolf series. This is another loosely-tied-to-Halloween-by-any-means-possible kind of book... because it includes monsters... and other scary things. Man this is hard. Oh, it cost me .99 cents. 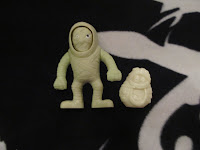 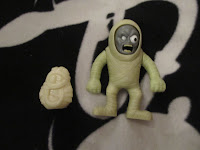 Well, it gets easier from here! These are pretty cool. The smaller figure is a Halloween themed Crazy Bone from a McDonalds Happy Meal, and the larger figure is a Stretch Screamer Happy Meal toy (pull his stretchy arms to make his face turn around and reveal the gray, screaming ghoul-face!) both of which I picked up to complete a very special project I have been working on. I paid .99 cents for each of them. Notice they are both mummies. This will be important later. They had a whole assortment of the Halloween Crazy Bones figures from McDonalds, but I just wasn't that into them. Someone obviously donated a huge collection of Halloween-themed McDonalds toys because along with these there was a pretty big assortment of trick-or-treat pails from McDonalds, and also: 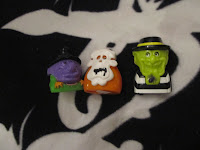 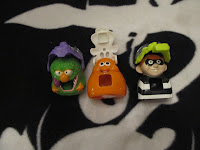 I found a pile of these guys sitting on an end-cap of the Halloween section. They are McDonald-Land characters dressed up in Halloween costumes, and they dispense candy (no candy was included, nor would I have consumed it, had it been... because... gross.) so they're sort of a triple threat or... triple treat. These guys were all .99 cents a piece, though I was sorely disappointed not to find Ronald, Birdie, or Grimace, especially since there were three of the McNugget toys there. These guys are (from left to right): Iam Hungry dressed as the purple witch, a Chicken McNugget dressed as a white skeleton, and the Hamburglar dressed as a green goblin. 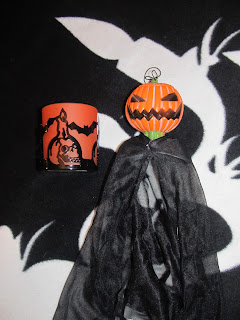 Picked up the candle holder for 1.99 (because I love this sort of candle holder, and it looks great in my display) and this spooky Jack O' Lantern monster/ghost/thing that hangs up with a drapey capey thing that dangles down for .99 cents. I just like his face. 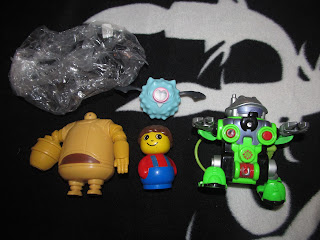 Finally there was this .99 cent Grab-Bag that I bought solely for the tan-colored Astro Boy robot on the left. I'm justifying this as a Halloween purchase by calling this a bag filled with: Two killer robots, a vampire pig-brain bat-thing, and a figure I like to refer to as"victim". What they really are is some sort of Pokemon figure, a Rescue Heroes robot side-kick figure, and a Duplo figure. Again, I will probably re-donate all but the Astro Boy robot toy. 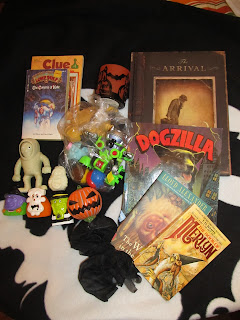 So, here's the entire Payday Friday: Halloween Edition Haul. Not too bad, if I do say so myself.

I'll be back soon with some more Ghoulish Goodwill Goodies. Until then, Happy Haunting!
Posted by Derek Ash at 7:06 AM