A few months back, before I had ever even dreamed of writing and maintaining a blog, I found an excellent, excellent grab-bag at goodwill. I've detailed some of the other excellent grab-bags I've found including various different Masters of the Universe and other 80's toys in them... But I've been holding back on showcasing this particular one because I knew at some point I was going to want them for a Halloween post.

Only some of the items in this grab-bag were semi-Halloween themed... so I'll start with the three that have NOTHING to do with Halloween at all. (Unless you count the hockey mask... which I guess I sort of do... but then I guess I have to count the other two as... Easter?)

See More After the Jump.
The first three figures from the bag were Casey Jones, Ace Duck, and Usagi Yojimbo. The picture above is a little misleading because Casey did not come with his golf bag. I just forgot to remove that before snapping the pic. Casey and Usagi are two of my favorite Turtles allies, and along with Metalhead and Mondo Gecko, these guys made up the Turtle reserves when I was a kid, sort of like the New Fantastic Four was made up of the Hulk, Spider-Man, Wolverine, and Ghost Rider. These guys would swing into action as a team of second-stringers whenever Shredder had the Turtles down for the count (which happened pretty often). I never owned Ace Duck as a kid... and considering this one has no cap or wings, I'm not jumping up and down about him or anything. But its nice to have him anyway. 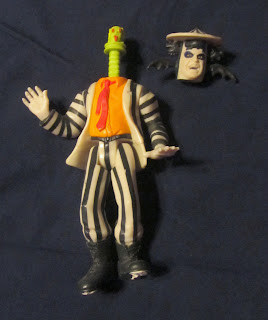 Next up is the 1989 Showtime Beetlejuice, which I had when I was a kid, and did not fully appreciate as I should have. This figure is the bees knees! First off, it's a dead-wringer for Michael Keaton's Beetlejuice character. Looks just like him. And it's one of my favorite looks from the movie, with the carousel hat from the third act. The pose is a weird one for an "action figure" but for a shelf display item, it's kinetic and energetic, and great. And... the neck extends! What's cool is that the head removes to expose a tiny, shrunken head, so you can have a shrunken head, a regular head, an extended shrunken head, or an extended regular head! I usually go for extended regular head for my display.

Also from the Beetlejuice line, I have the Adam maitland figure... which since he his missing the stretchy mask that fits on over his giant-baseball capped head... isn't really much of anything at all. This is supposed to be the stretched-head chicken faced version of Adam that he puts together to scare the living folks out of his house. Instead it's a version of Adam we've never seen anywhere, ever. With a giant, deadly baseball cap that could split concrete. At least his head slides down his arm like in the movie... it... never did... sigh.

Here is the one item that got me the most excited about this grab bag. It's a color-changing 1990 Camouflage Swamp Thing action figure! I also had this one as a kid, and next to the glow-in-the dark Swamp Thing that I also had, this was one of my very favorite action figures for a while. I remember him and Robo-Cop teaming up with a handful of other action figures to form a sort of bizarre version of the Avengers. This figure was supposed to be based on the T.V. show that aired around that time... which, also in common with Robo-Cop, was completely inappropriate for children.

So the exciting feature of this figure is the fact that it turns brown when it gets cold. So if you dropped him in the toilet, he turned in to a turd. Still... I loved him.

I paid 2.99 for these six action figures... but wait! There's more! Mixed in with the bigguns... there were a handful of Monster In My Pocket figures: 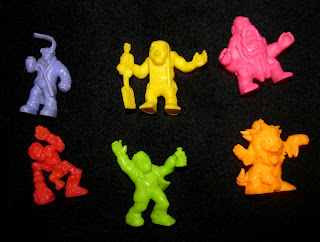 I loved MIMP as a young man, and even though I was really on the cusp of being "too old" for tiny rubber mini-figs (when you're a kid the idea of being "too old" for anything looms on the horizon like an oncoming freight train you've been tied down to the tracks of...) and when it came to the first series, I made it my mission to own them all (and damned if I almost succeeded with the exception of the Behemoth). Out of these six from Goodwill, the orange and pink figures are from a different series than I collected as a kid. You're looking at the Invisible Man in Purple, a Skeleton in Red, Charon the Boatman in Yellow, Mr. Hyde in green, Ymir (from the 2nd series) in pink, and Tarasque (2nd series) in orange.

I'll be back soon with more Ghoulish Goodwill Goodies soon. So until then, Happy Haunting!