So this weekend we carved our Jack O' Lanterns! We always tackle this as a family, and this year was no different. 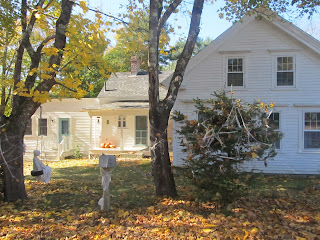 Fall has come to the Goodwill Geek's house, and those poor, unsuspecting pumpkins were just hanging out on the porch, innocent to the horrors that awaited them.

See the finished results after the jump! 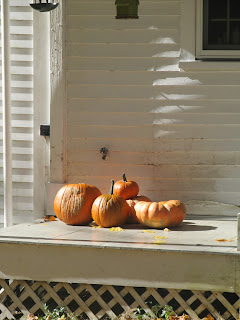 Here are the unsuspecting pumpkins, home fresh from the store. Don't they look rustic and beautiful? 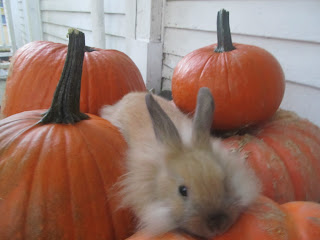 Here is my  daughter's rabbit, Pumpkin... sitting on the pumpkins. Pumpkin loves pumpkins. 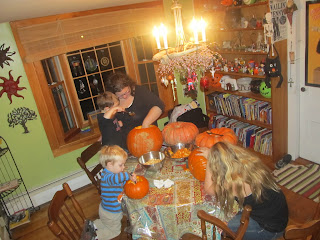 My wife, daughter, two sons, and I all carved our pumpkins at the same time, which went a lot better than I figured it would. Here's my lovely family carving away at those pumpkins, each working on their own masterpiece. 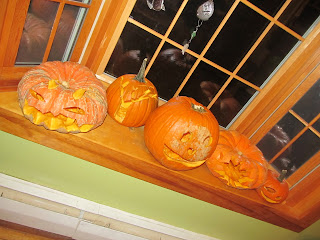 Here's the entire family of Jack O' Lanterns, lined up on our window seat. They won't be staying here. We stuck them up there just during dinner so we could enjoy our meal and our pumpkins at the same time. 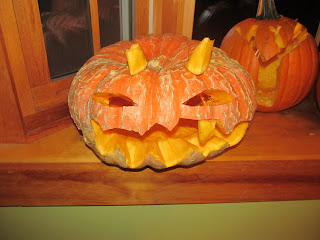 Here's the Goodwill Geek's very own pumpkin! I like to keep mine simple. I love classic, creepy faces. I was going for devil's horns on the top... which I think I'll plan out a bit better next year. 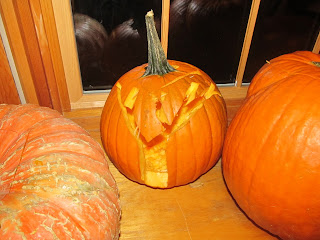 Here is my daughter's tree Jack O' Lantern. It caved in a bit, so she had to use some toothpicks to shore up the design and hold it together. Toothpicks: saving Jack O' Lanterns since pretty much forever. 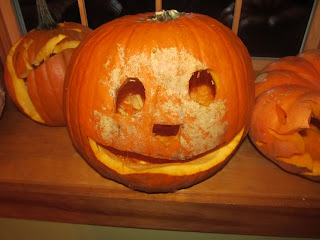 My oldest son gagged a few times while he was handling the pumpkin innards. I found this endlessly entertaining. Anyway, he decided he wanted a "robot face" and this was what he came up with. He decided when it was done that it was much less a robot and much more a basic "pumpkin face". I still think it looks great. 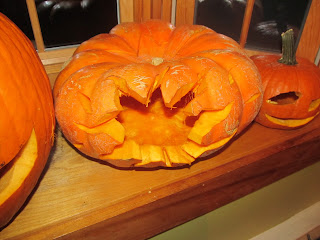 My wife made a sun. She always makes something pretty, hippie-dippy, and generally just not scary. So I'm secretly pretending that this is some sort of tentacled Lovecraftian horror, or a lamprey-mouthed pumpkin from the X-Files. 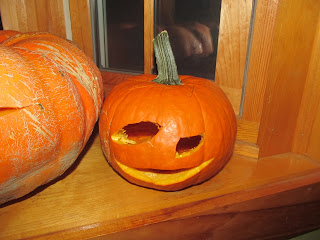 My youngest son did a great job emptying all the seeds out of his pumpkin... and then proceeded to start filling it up with seeds again. This was the face he drew. I cannot think of a single cuter face for any pumpkin ever. 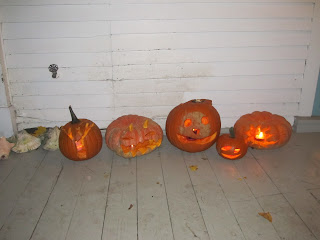 Back to the porch with you all! They actually got to spend the night inside. We have a pretty persistent raccoon problem, and so we did not want them getting eaten the same night we carved them. We put them out on the porch for the few hours before bed so people driving by could get a look at them for a while. 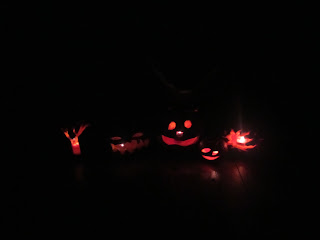 Here they are, lit up and glowing in the Halloween dark. There is no light more beautiful than that from a Jack O' Lantern in the gloom. 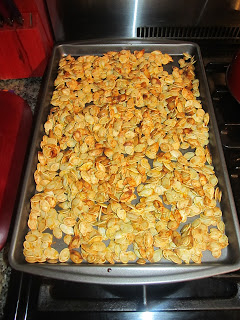 And of course... the fun doesn't end there! Roasted pumpkin seeds that taste a bit like fried chicken skin, and a bit like sunflower seeds. Delicious!

Well, we're sitting and watching Hurricane Sandy about to make landfall, and wondering how we'll be effected in the next few hours/days. Don't know if we'll have power for tomorrow, or if I'll be headed into work at 2:00 in the morning because the power is out... (I have a very electricity-sensitive workplace) so I have no idea if I'll be able to finish out my countdown. Fingers crossed. I also hope Halloween isn't cancelled due to storm conditions... and of course I hope even more so that everyone stays safe, and dry, and unharmed.

I'll be back soon with more Ghoulish Goodwill Goodies, so until then, Happy Haunting!
Posted by Derek Ash at 3:29 PM