So... I was going to do the Top 20 kid's books for Halloween, and I realized I just didn't have that much to write about the 20-11. So I'll toss a few "Honorable mentions here before I get to the actual countdown.

Phew... now that that's out of the way... Welcome to the Goodwill Geek's Top 10 Kid's Books for Halloween!  (At least at his house... where his kids are concerned). I'm just going to focus on the first 5 books of the countdown tonight, and finish the rest tomorrow. 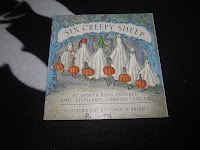 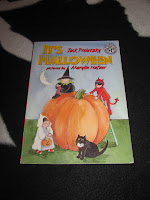 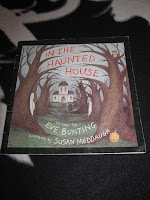 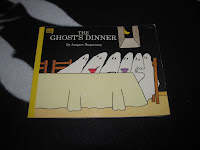 These are all great books, but ultimately not Top 10 material for various reasons. I'm not going to talk them to death, but you should definitely check these all out (There'll be more honorable mentions tomorrow). I feel especially guilty for putting Jack Prelutsky's It's Halloween in the Honorables... but I had to make some tough choices. Let's just move on before I start tearing up.

See the Top 10 after the jump! 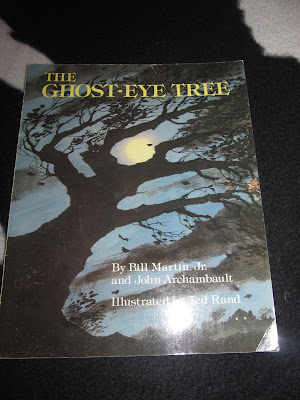 This book is technically not a Halloween book at all, but it is a story of children spooked by an old tree that lies on the road between their home, and the farm their mother sends them to fetch milk. The story is a simple one, and shows the power of childhood to dredge up terrors from seemingly mundane things. 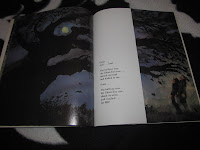 The Ghost-Eye  Tree of the story also has the feel of a local urban legend, like the old witch's house at the end of the street, or the hill where the ghostly hitch-hiker is said to be spotted on a regular basis. It celebrates the fun of being scared, in the same way Halloween does. Ted Rand's artwork is gorgeous, moody, and fills the story with just the right balance of dread and childish innocence. An excellent book to kick things off.

#9. The Boy and the Ghost by Robert D. San Souci Illustrated by J. Brian Pinkney 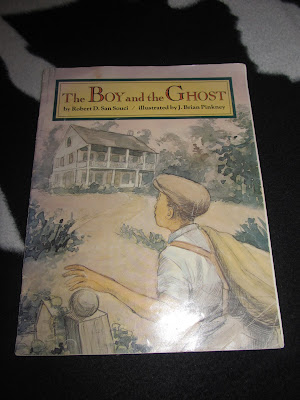 The Boy and the Ghost is an African American southern-folk retelling of a much older story from old Europe. It tells the story of a boy challenged to spend the night in a haunted house where he is menaced by the piece-by-piece appearance of a dismembered ghost. The boy is brave, polite, and generous, and these traits eventually lead to him winning the day and gaining a just reward. 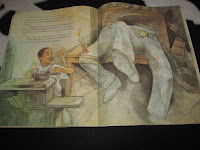 My kids' eyes always get huge as we read this story to them and describe the arrival of the ghost's various body parts, detailing how the ghost puts himself together in the grand finale confrontation. It's a nice spooky but-not-too-spooky story that gets us in the mood for the season. Again, not strictly a Halloween book, but a great version of a classic ghost story.

#8. The Lost Treasure of Skull Island by Martin Taylor and Duncan Smith. 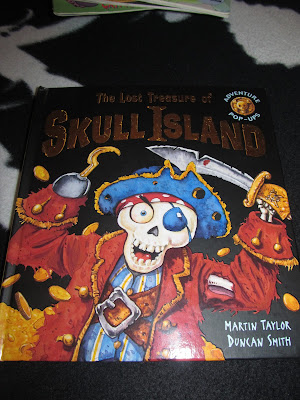 This is a pop-up book, which is NOT a cheat, I don't care what you say. The poetry that leads you through the book has a nice cadence to it, that lulls you until one of the pop-up creatures tries to eat your face off. This is by far the best "jump scare" book we own. My boys thrill as I get ready to turn pages, waiting for each beast to pounce. 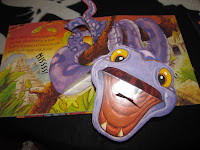 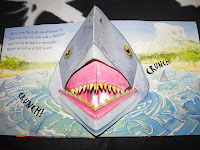 The story is a search for pirate treasure, and each page tells of another danger the reader must face while on the hunt. Bats, thieving monkeys, giant pythons, ravenous sharks, and others threaten to bring an early end to the quest until the reader is ultimately faced with the skeleton pirate from the cover of the book. Again, not a Halloween book per se, but also again, a great one for getting in the mood for the season. Pirate ghosts play a big part of our Halloween here at the Goodwill Geek's home.

#7. By the Light of the Halloween Moon by Caroline Stutson and Kevin Hawkes. 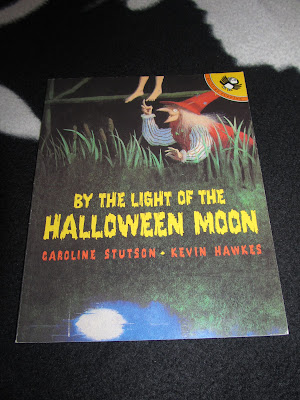 Now we're into the thick of the 'official' Halloween books! By the Light of the Halloween Moon is a charming story of a series of traditional Halloween beasties who all come out to dine on the toe of a young girl dangling her feet off a pier on Halloween night. It's a repeating story, in the style of "This is the house that Jack built" or "There was an old lady who swallowed a fly" usually I find those unbearably annoying... but between the awesome language and the beautiful artwork... this one works perfectly. 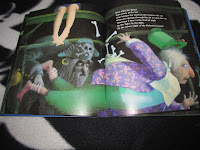 The colorful characters that show up to chow down include a cat, a witch, a ghoul, a ghost, a bat, and a hideous sprite. None of them succeed, but watching them all one-up each other until the hilarious climax of the tale is where the fun lies. My daughter used to squeal with laughter when she was younger and each creature would oust the next. A ton of fun, and with a moody bayou atmosphere that I just love. 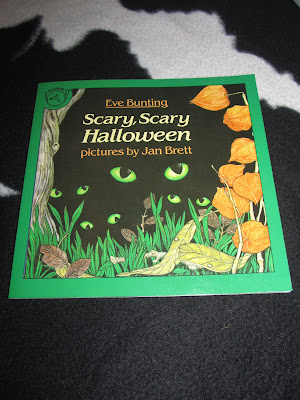 Eve Bunting is the unofficial Queen of Halloween when it comes to kids' books at the Goodwill Geek's house. Her book, In the Haunted House (from the Honorable Mentions above) along with this book and... one more... are some of the greatest Halloween books you'll ever meet. This one tells the tale of some scared observers watching a parade of trick-or-treaters (believed to be actual monsters) go by on Halloween night. 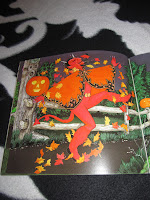 The hypnotic poetry and bright, colorful artwork make this a feast of Halloween that cannot be read enough. I mean, just look at that image above. Has there ever been such a... devilish devil in any Halloween book for kids before? The whole book thrills in the wonder of Halloween and all its bright, vibrant colors fighting against the dark of Autumn and the dying of the year.

So this is the bottom 5 of my top 10. I'll be back tomorrow with the top 5. After that, I'll be back soon with even more Ghoulish Goodwill Goodies. Until then, Happy Haunting!
Posted by Derek Ash at 7:35 PM