Day 19: Another Peek at the Cave, Halloween Edition!

So as I may have mentioned a few times in the past, I've recently moved to a new house, got a new room to keep all of my Geek-stuff in... and I've been slowly putting it together ever since. So I thought I'd showcase a few little corners of the room, namely the DVD shelves that feature horror-themed collectibles and horror movies. I have not actually organized my DVD collection in any fashion other than separating out the horror films... I'll be getting around to that sometime soon. Any-who... Let's get started. 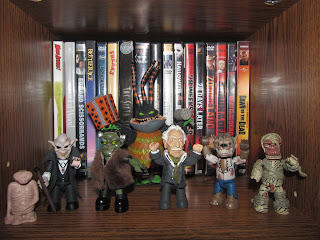 This first picture is of my Mez-Its collection, accompanied by the Harlequin Demon from The Nightmare Before Christmas. You're seeing the first wave of Monster Mez-Its, plus the Vincent Price Mez-It from the Edward Scissor Hands set. Edward himself is currently MIA, but he'll be up here soon enough.  The Mez-Its have an amazing amount of detail on them, and we have the four classic universal greats: Dracula, Frankenstein's Monster, the Wolfman, and the Mummy. Vincent Price is just one of those classic icons of horror as well. In terms of DVDs, there's also a nice selection of zombies, ghost stories, and Tim Burton movies. 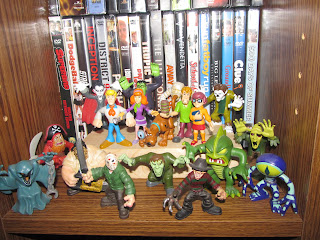 Next up is my collection of Scooby-Doo Mystery Mates. Aaaaand... some other miniature figures to menace the Scooby Gang that you may or may not have seen in any episode outside of a Robot Chicken sketch. My Tiny Terrors collection. I'm a huge Scooby-Doo fan from way back. When I would get back from school as a kid, I would catch the last few minutes of General Hospital and then straight on into an hour of Scooby-Doo. This is the entire run of villains for the Mystery Mates line, and the 5 basic versions of the main Scooby Gang. I would have loved to have seen this collection expand to include figures like the Ghost Clown, the Black Knight, the Man From Mars, the Witch Doctor, the Space Kook, and Captain Cutler (among others... like every villain ever) plus other Scooby buddies like (shudder) yes, Scrappy Doo, Scooby Dee, and Scooby Dumb. Ah well. A boy can dream. You'll notice... NO horror DVDs in the background. But plenty of other geeky goodness hiding back there. 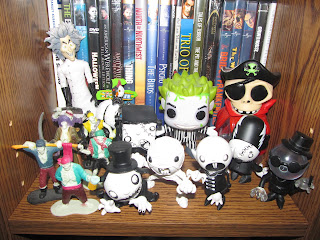 Here is a Funko POP! Beetlejuice figure, a pirate skeleton money bank from CVS, a set of Robot Chicken action figures, a set of Killerpanda black and white Monster figures, and a set of skeleton pirate figurines. If you look closely, you will see my absolute favorite toy OF ALL TIME... the dwarf pirate skeleton holding a stein full of beer! I got two play sets including three skeleton pirates, and other accessories, such as the green sign (you can sort of see behind Robot Chicken's head) that points out exactly where to find the pirate's hideout at Mardens for .99 cents each. Those pirates are some of my  most prized possessions. Each one has a distinct personality, and its own awesome pose. I'll probably revisit them sometime in the near future. Pirates, and especially undead Pirates, have a big place in our Halloween lore here at the home of the Goodwill Geek and Family. The Killerpanda figures are also some of the most incredibly cute and eerie versions of the Universal monsters you'll ever see. Mr. Hyde and The Mummy both look absolutely rabid while Dracula and the Invisible Man look dapper and almost 60's stylish. Frankenstein's Monster and the Bride are a cute and mildly off-putting couple of interest. And do you see the goofy grin on that skeleton pirate I bought from CVS a million years ago? Beetlejuice looks amazing in this format... but then there is almost no such thing as a character I wouldn't buy in Funko POP! form. On the shelf behind, we see a plethora of classic horror movies, including films from the Universal Monster set, Alfred Hitchcock, Vincent Price, and films like The Exorcist, Jaws, The Shining, and the Thing. 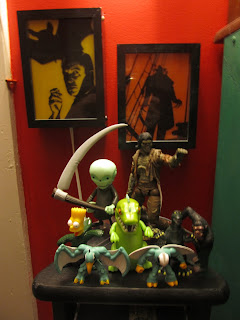 This last picture has so much in it to talk about... from my Death Jr. figure, to my Simon Garth figure (star of Marvel's Tales of the Zombie), to the Gormiti figures that remind me of kaiju, to the dollar store Godzilla and King Kong, to my sparking Reptar Burger King Toy, to my Bart Simpson as Godzilla figure (also from Burger King)... but what I really want to focus on are my Morbid Decor light boxes. These were gifts to me, and they feature Nosferatu and Vincent Price. Created by an Etsy seller, Morbid Decor has since stopped production... but you can still find notebooks made from old VHS covers by the same artist over at Finders Creepers.

That's all I've got for today, but I'll be back soon enough with more Ghoulish Goodwill Goodies! Until then, Happy Haunting!
Posted by Derek Ash at 8:29 PM